General Wo is a particularly obscure Captain America enemy. His main appearance took place in 1965.

General Wo is built like an exceptional sumotori , and is at least 460lbs (and may in fact clock in at more than 500). He’s immensely strong and can ignore most ordinary attacks.

Like most sumo champions, he’s quicker and more manoeuvrable than most opponents would expect.

General Wo is supposedly a normal homo sapiens sapiens who simply happens to have great strength and enormous bulk. However, he’s seen lifting a statue that probably weighed 25 tons or so. Since his strength level is so murky, we’ve opted for a rough average (“Class 5” in Marvel terms).

General Wo may simply be an example that there’s no such thing as a “maximum human strength” in comics, especially for truly massive people.

General Wo was the despot of a small village in Việt Nam, and a part of the Việt Cong  military. From later dialogue, he may have been Chinese. Or perhaps he was Vietnamese and emigrated to China after the war for political reasons.

At the beginning of the American invasion, his troops captured an American helicopter pilot named Lt. Jim Baker. Captain America himself was sent to barter for his release.

For some reason General Wo’s men agreed to free Baker if Captain America passed a gauntlet. After defeating the 2 strongest soldiers, Cap was found worthy to face the General for Lt. Baker’s freedom.

Cap soon discovered that even he couldn’t strike telling blows against Wo’s stupendous mass. He had to flee with Baker after pinning the General.

Cap met General Wo again in the late 1990s. Captain America had infiltrated an AIM weapon exposition disguised as Crossbones, unaware that a challenge by Georges Batroc awaited Crossbones there.

The challenge was a series of ring fights involving Mad Dog, Ramrod II and Razor-Fist III as well as General Wo (who apparently moonlighted as a mercenary martial artist) and Batroc himself.

Cap won against General Wo by fighting as dirty as Crossbones would have, choking Wo long enough to throw him out of the ring and win. 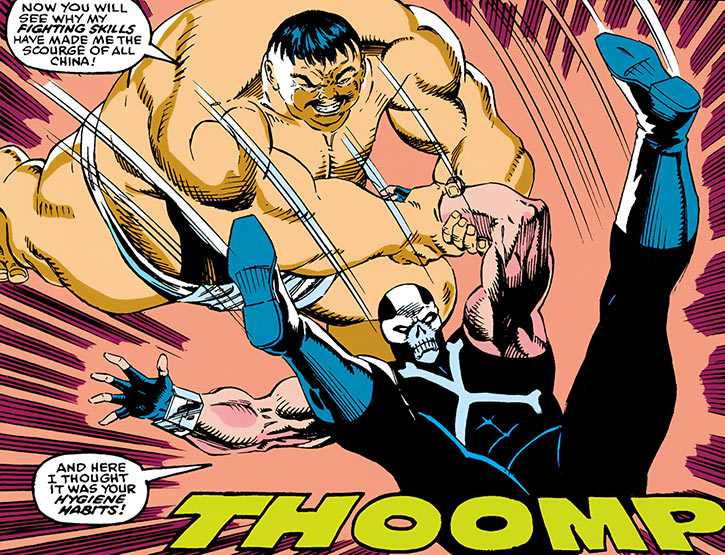 AFAIK, there’s no sumo-like tradition in Việt Nam. It would also take exceptionally convoluted circumstances for a Vietnamese kid to be trained in sumo in Japan in the 1940s. I’d regard Wo’s sumotori-like appearance as further proof of a low-key mutation.

A hulking, confident Red Menace out to prove the inferiority of the capitalist imperialistic running dogs – at least in his initial appearance. His current status and goals are unclear.

Insert as needed. He’s so obscure… His 1990s appearance has been so brief you could invent any kind of story between the 1960s and now.

His actual military rank is unclear, but the forces under his control amounted to a company – so in game terms he’s at least a Captain.

If you decide to completely ignore the erroneous statements about him not having powers, rather than average, raise his STR to 11. 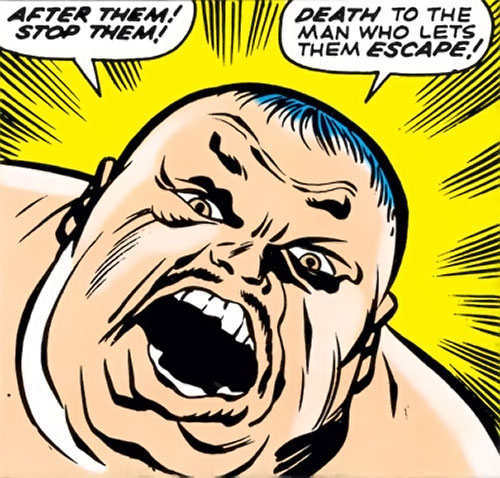 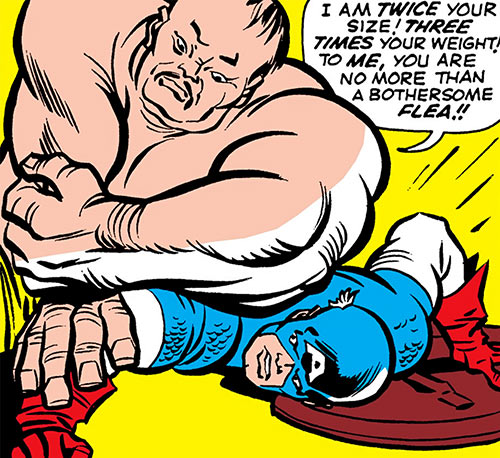