On Earth-16, super-heroes have been around for less than a decade, but the Justice League already has sidekicks. Yearning to be considered as real heroes, these teenagers form “the Team”. The Team specializes in covert missions and reconnaissance.

The show’s tone was a healthy blend of teen angst, humour, and action. Throughout the series, the plot remained fresh while respecting the source material.

At this stage, our Young Justice profiles cover the first 10 episodes of Season 1.

Genomorphs are genetically-engineered lifeforms. They were created by Cadmus Laboratories in Washington DC. While their main purpose varies from sub-species to sub-species, overall they have been designed to be living weapons. As such, they can be exceptionally dangerous to normal human beings.

While there has been no evidence of their method of creation, one can infer that the Genomorphs are essentially human clones. However, their DNA has been altered at a cellular level. 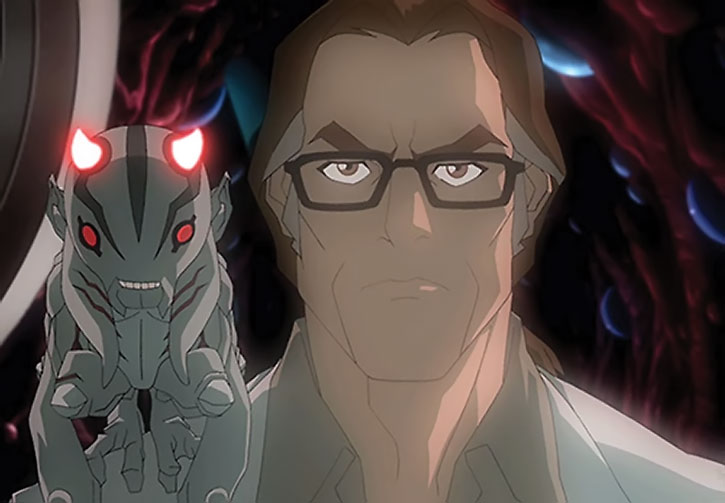 At this time, there are seven known sub-species of Genomorph. The seventh is unique in both form and function and is the only known hybrid of Human/Kryptonian DNA; Project Kr, also known as “The Weapon” or Superboy.

Through the statements that Dubbilex used when speaking to the Guardian, it can be inferred that he is also a Genomorph. If this is true, then he is the simplest type, a purely human clone.

The six main sub-species are:

They usually operate in the Action Genre.

G-Gnomes are one of the smallest of Project Cadmus’s genetic creations. Their name is a play on the word “genome” as well as the word “Gnome”.

They are small, four limbed, bipedal creatures. They have pale white skin and black stripes on their heads. All G-Gnomes have a pair of short yellow horns that protrude from their foreheads and round blood red eyes.

As a species, G-Gnomes have been engineered to possess the power of telepathy. This allows them to communicate with each other over large distances, mentally control people, and most importantly indoctrinate people over time.

The G-Gnomes were created by Cadmus and produced in huge numbers. They acted like the surveillance system in the Cadmus facility in Washington, D.C.. Gnomes will alert each other if an intruder is spotted.

Each staff member at Cadmus kept a G-Gnome on their shoulder at all times. This allowed Mark Desmond to use the G-Gnomes’ telepathy to mentally subjugate his staff, preventing them from disagreeing with him.

The average G-Gnome has the following stats: 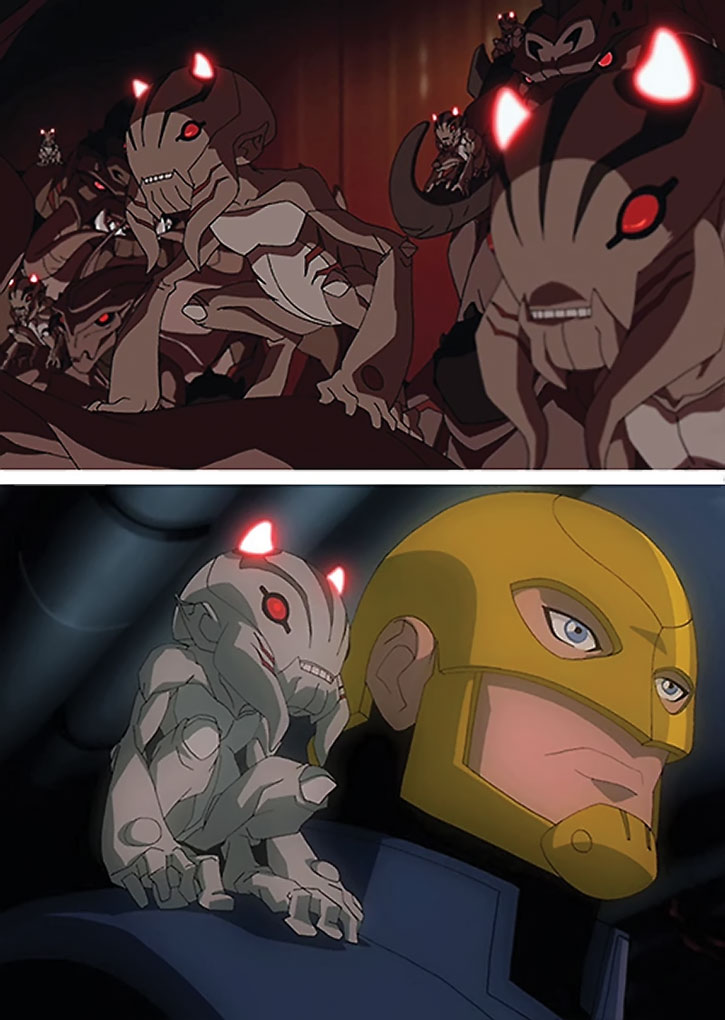 G-Elves have been designed to be a lightweight infantry trooper. They are capable of attacking with great speed and savagry. These simple creatures appear to be living weapons that have little use outside of the maiming and disabling of their designated targets.

These short, thin creatures (no more than 5’, 100lbs), have an unmistakeable grey palour and completely hairless bodies. A long prehensile tail juts out of the base of their spine. Their ears, though elfin in appearance, jut straight up in an indelicate way from either side of their head.

No G-Elf has even a hint of nose, instead two slits sit in the middle of their face, allowing them to draw breath. They have the same trademark blood red eyes that nearly all Genomorphs possess. But unlike their cousins their oversized hands end in razor sharp talons. 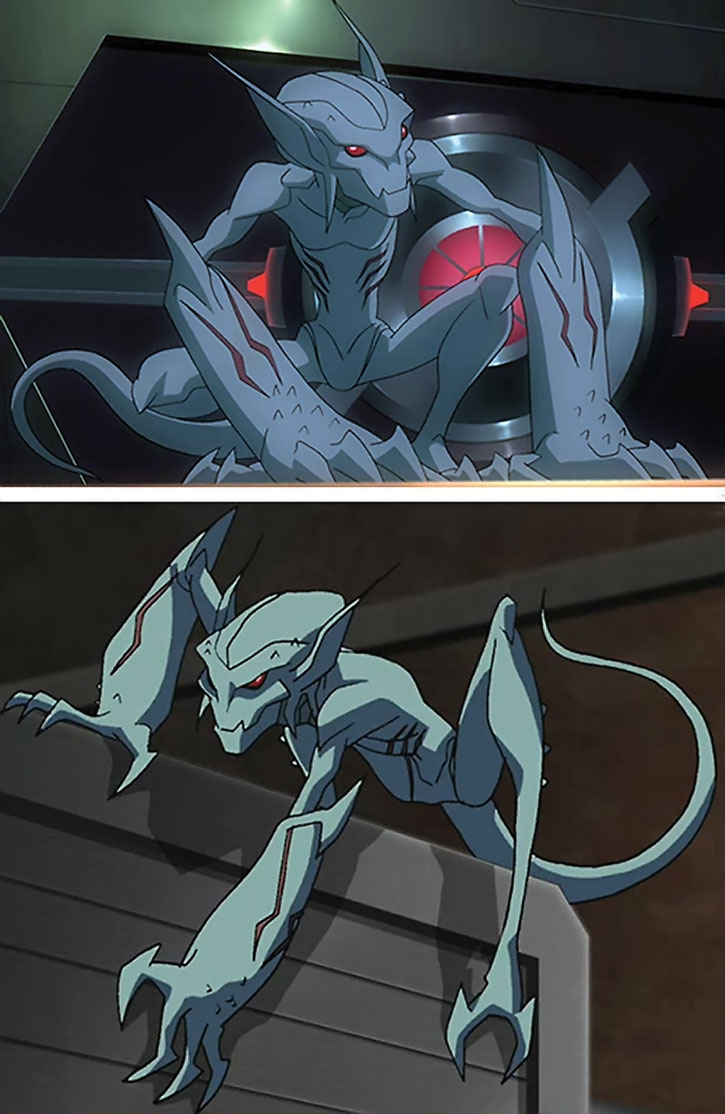 G-Trolls have clearly been designed for one purpose and one purpose only, raw physical strength. They mammoth beings are simple in nature, but possess superhuman strength and durability. In the Cadmus facility, they not only provide heavy security, but they also are used for any sort of heavy labour that is required.

A G-Troll is an intimidating creature to behold. Each one of these powerhouse creations stands at least 15’ tall and looks to weigh somewhere in the 1000lb range. Massive layers of muscle cover their form. Menacing looking spiked ridges of bone jut out from their shoulders and their cheek bones. This gives them the appearance of tusked warriors.

Though they are bi-pedal creatures, G-Trolls move around by knuckle-walking much like a great ape. If one were to compare them to other animals one would most likely say that they have the size of a elephant, the stature of a mountain gorilla, and a “rancor” like appearance.

Bonuses and Limitations:
Growth Is Always On (+1); Already factored into the Stats above. 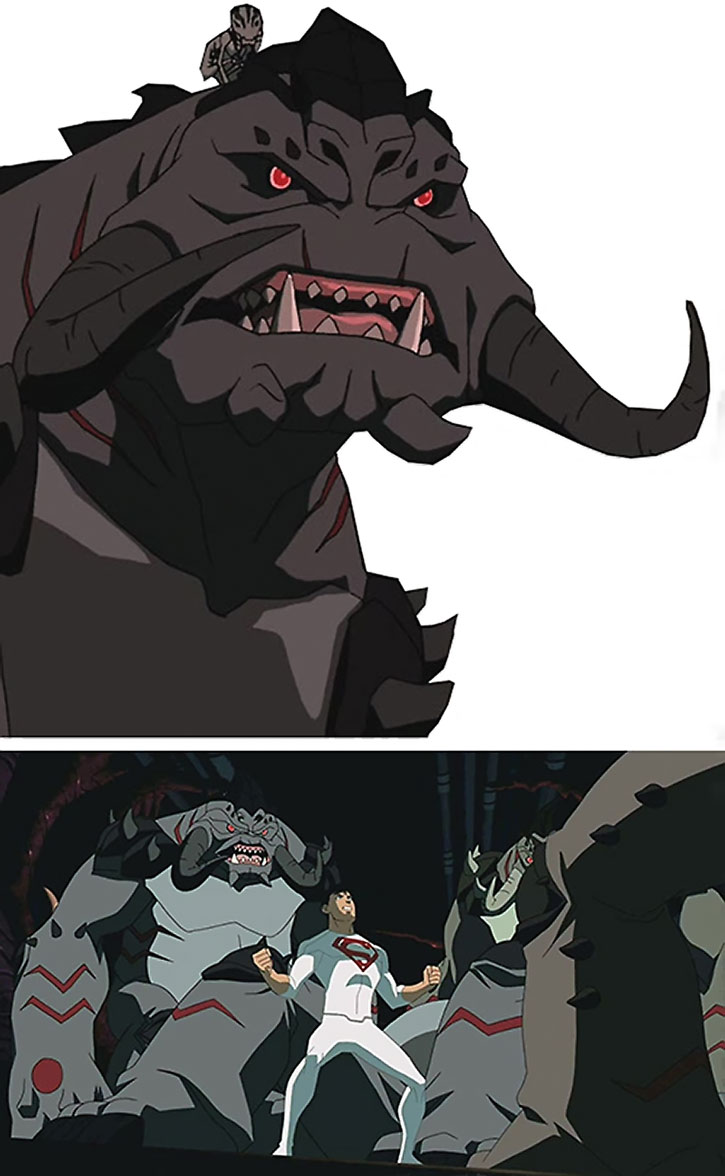 At this time, Dubbilex seems to be one of three unique Genomoporphs (the other two are Superboy, and presumably the Guardian). Unlike his two more human appearing “brothers”, Dubbilex is a G-Goblin.

As such he is a one of a kind Genomorph. He was bred to possess potent telekinesis. But through the whims of fate, developed superior psionic  abilities that are greater than his much smaller G-Gnome cousins.

Unlike the rest of his Genomorph cousins, Dubbilex was not only highly intelligent but he had a strong independent streak. Secretly, he yearned for freedom, not only for himself but also for his brethren.

With this goal in mind, Dubbilex kept his true psionic strength hidden from Cadmus officials (Mark Desmond in particular) and concocted a brilliant scheme. He only needed to wait for the right moment. 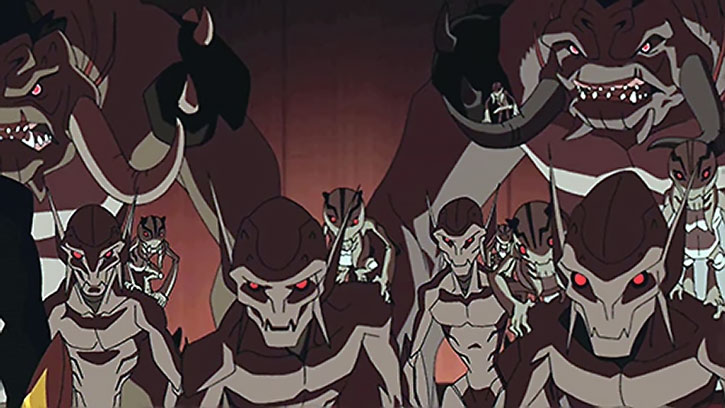 The moment arrived with the creation of the Superboy. When the Kryptonian hybrid achieved sufficient maturity, Dubbilex set his plan into motion by starting a fire in Cadmus’ ground-level facility hoping to draw the authorities to the underground labs.

He then lured Robin, Aqualad and Kid Flash into the secret facility by allowing Aqualad to see him entering an express elevator.

While exploring the facility the trio fell afoul of the assembled Genomorphs contained within. During their frantic run through the facility Dubbilex subtly guided them to the slumbering Superboy. Despite their combined powers and skills, the trio were captured, and eventually freed by Superboy.

Dubbilex observed the newly formed quartet as they attempted to flee the facility. In the moment of their capture he stepped in and telepathically freed them from the clutches of the assembled G-Gnomes that held them in their thrall.

In the end, he revealed his part in the events of the day. He also explained his hope that Superboy would pave the way for the other Genomorphs to be accepted in the outer world.

Dubbilex was voiced by Phil LaMarr .

The events of Young Justice are canonical and take place on Earth-16 within the DC Universe. Any travel through the DC Multiverse could potentially bring the player characters into contact with the Genomorphs. 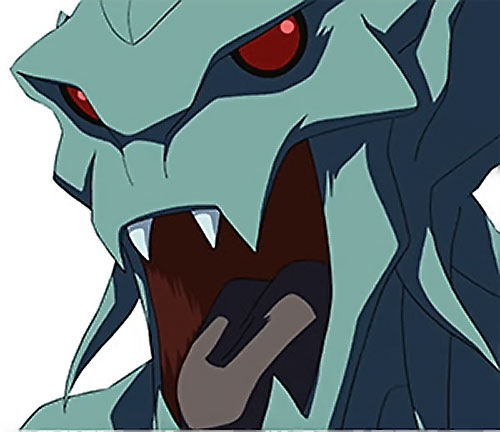 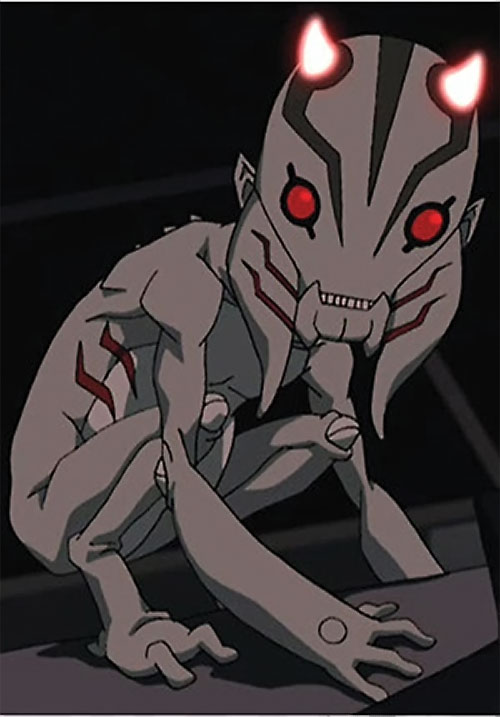 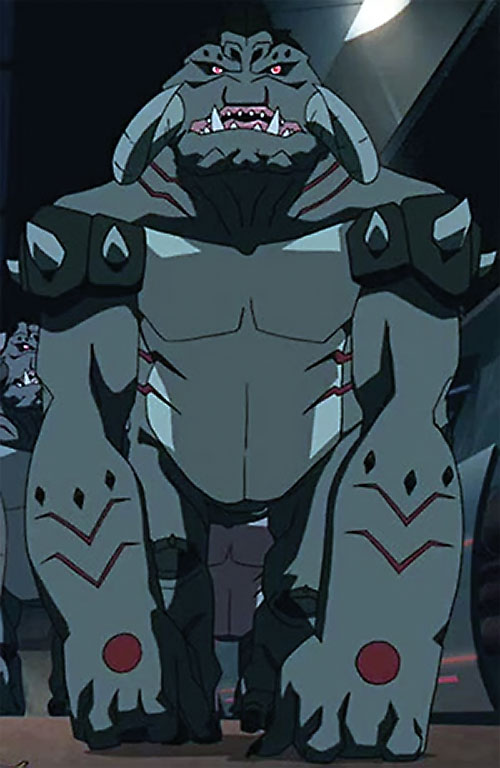 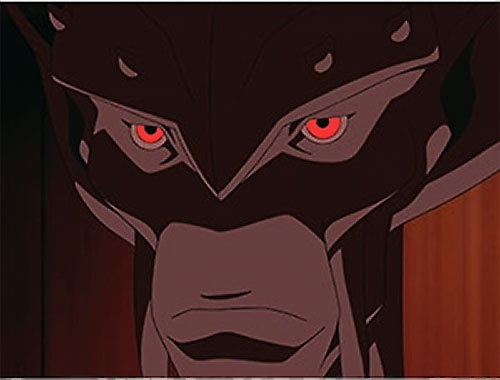 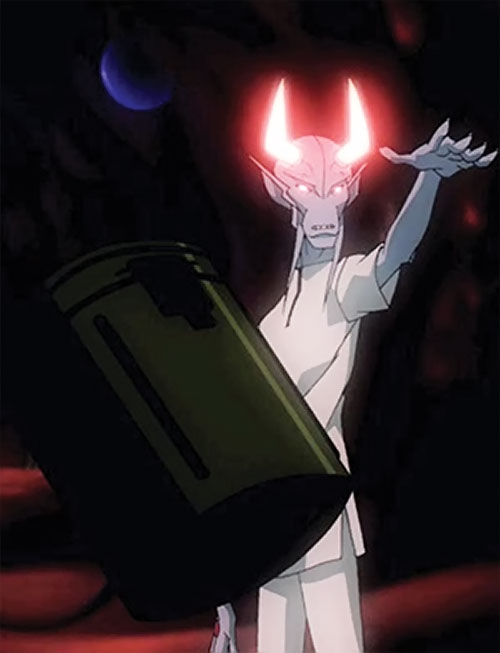 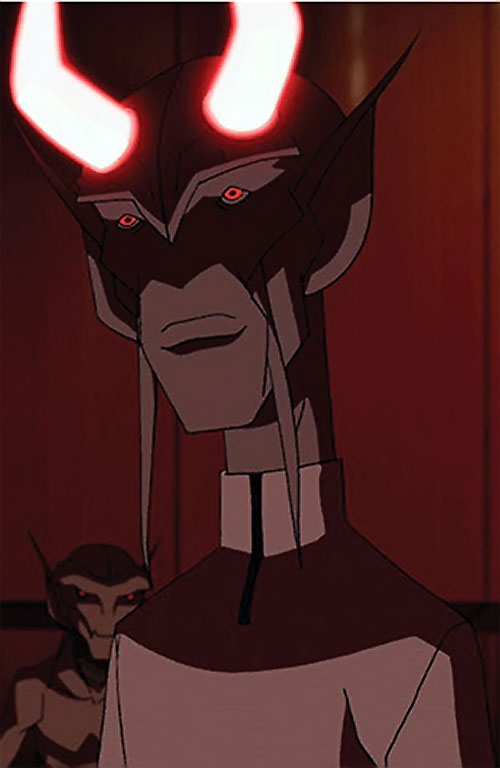