Ballard is apparently a veteran CIA field officer. He demonstrated a good array of skills ranging from manipulation to stealth to demolition – but he doesn’t seem to be cinematically  competent.

The Centurion weapons system was built by S.H.I.E.L.D.’s head technologist, Sidney “the Gaffer” Levine. Though it was remarkably powerful and could take on several Avengers, the Centurion technology was never seen again.

Depending on which way you squint, the helmet’s design could resemble the Arsenal robot or Shi’ar tech. Perhaps the Centurion suit used irreplaceable modules from Howard Stark or the Shi’ar, explaining why none have been deployed since the Ballard incident.

The suit is made up of various parts :

The computer is artificially intelligent, operates a full sensors suite, and includes an extensive database access about possible opponents. It provides excellent tactical assistance, making the wearer redoubtable in a superhuman fight even if they’re not trained for that. 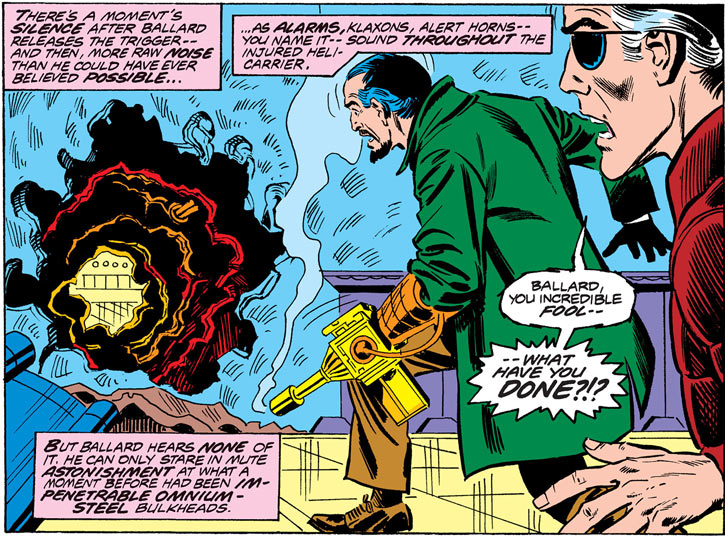 The gun is a meson disruptor. Depending on the setting, itcan act like a force beam or a disintegrator beam. Though it is fairly small, it packs a monstrous punch. The beam was seen shearing through multiple osmium-steel bulkheads like butter.

It could even affect the Vision if he was less than completely intangible, or demolish a large building with a few shots. However, Wonder Man proved able to shrug its effects.

Ballard has been a CIA agent for years, and is apparently a fairly senior officer. Reportedly, he was in the Vietnamese highlands in 1968, running intelligence operations and claiming to report directly to the White House.

Ballard had an encounter with William Foster (the future Black Goliath) at one point, possibly in Việt Nam. What happened remains unrevealed, though Ballard seemed to have a grudge against Foster. Ballard implied that Foster had let him down, perhaps because the spook’s work was less than ethical.

In 1976, Ballard was detailed to investigating a mysterious box holding the Null-Bomb. This was a weapon built by the alien Stranger and capable of destroying a large solar system. The Stranger had been defeated by the Silver Surfer and had left the Null-Bomb behind. However, he also wiped recollections of the incident from everybody’s memory. 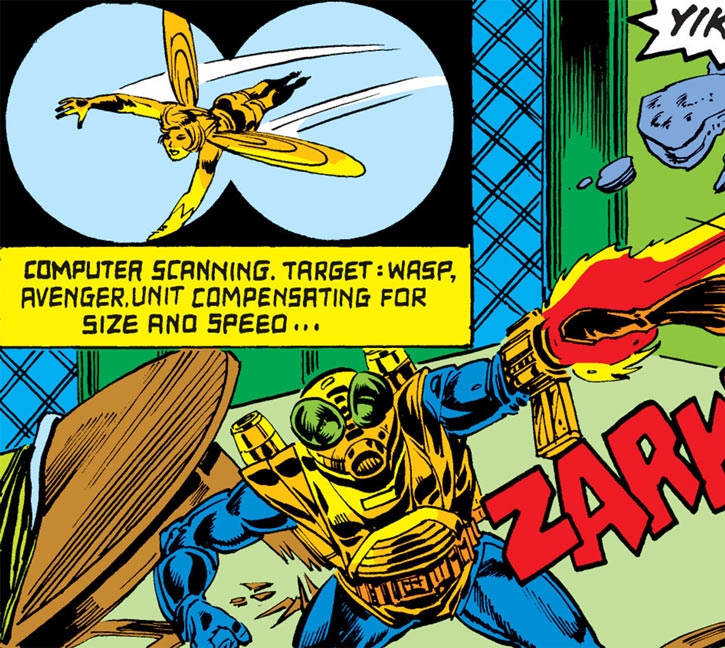 But Ballard seemingly pieced together some of what had happened from the notes of the heroic scientist Al Harper, who had died disarming the bomb.

Ballard then worked with Stark International to investigate the box holding the Null-Bomb. That presumably was because the high-tech firm was among the few with the technology and expertise to analyse alien tech. Ballard kept a tight security around his work. He even prevented Tony Stark from giving important information to the lead scientist on the case, Bill Foster.

Nevertheless, the box was stolen by the mysterious Vulcan and his henchmen. The situation would later be handled by various superhumans, and in particular the Champions and Darkstar (Layna Petrovna).

Ballard was also involved in some unrevealed capacity as a governmental liaison with the Avengers during the 1970s. He apparently complained that the security at Avengers’s Mansion was too lax.

A whiff of hellfire

In the late 1970s, Ballard was apparently a double agent. He worked for both the CIA and an organisation called “the Council”. From later stories, it is likely that the Council was the Council of the Chosen of the Hellfire Club, which would soon be purged by one of its members — Sebastian Shaw — and replaced by the Inner Circle.

The Council wished to destroy documents held by Carol Danvers – implicitly something from her days as a spook or a NASA employee. They sent Ballard. The agent sneaked into Danvers’s apartment whilst she was at work and torched it. But one of the incendiary canisters malfunctioned. Thus, the documents survived the fire that ravaged Carol’s flat.

Ballard then burglarised Danver’s office in the Daily Bugle building. He wanted to check whether the documents were there. Reporter Frank Gianelli stumbled upon him, but was knocked out as Ballard escaped. Howbeit, Gianelli recognised Ballard from his tour of duty in Việt Nam.

Shadow of the gun

The Council then tasked Ballard and another agent, Mystique (Raven Darkhölme) with the assassination of Ms. Marvel. Whether the Council knew that Danvers was Ms. Marvel is unrevealed. If they did, they didn’t tell Ballard. 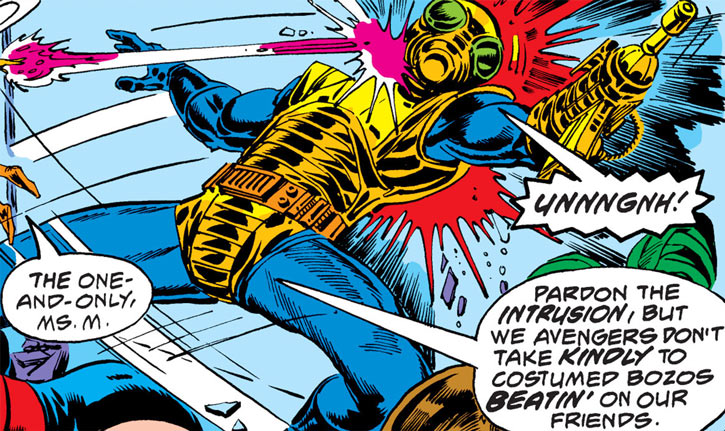 Mystique managed to fool every S.H.I.E.L.D. sensor and guard into thinking that she was Nick Fury. Ballard accompanied “Fury” into the most secure armouries of the Helicarrier to procure a weapon capable of killing Ms. Marvel. He presumably used his CIA credentials to justify his presence at Fury’s side.

Mystique’s subterfuge allowed them to steal S.H.I.E.L.D.’s most potent weapon, the Centurion suit. Ballard then attempted to kill Ms. Marvel using the armour. Thanks to the intervention of the Avengers, Ms. Marvel vanquished the attacker, and the unconscious Ballard was unmasked.

Ballard was never seen after that incident. Perhaps he was retired and his long career ended with that failure.

An unprincipled operator (though not necessarily a casual killer) who apparently sees himself as a hard man with enough pull to operate with some insulation from the law.

Though little is known about Ballard, he seemed prone to grudges. Often in a petty and disproportionate way.

“Congratulations, friend, you’ve won your life… but here’s a little something to remember me by !” (KRAK !)

“You’re a threat, Ms. Marvel. And therefore you must be eliminated.”

Most of Ballard’s Skills are undemonstrated and are based on reasonable extrapolations about his background ; his stats are likewise somewhat speculative.

I’ll list this separately, since Ballard had it for but a brief time. The suit is technically considered a character, as it overrides the wearer’s scores. 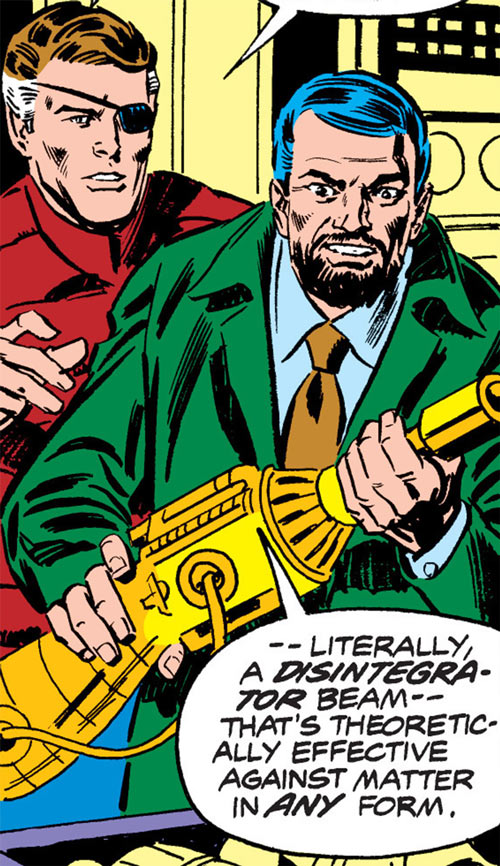 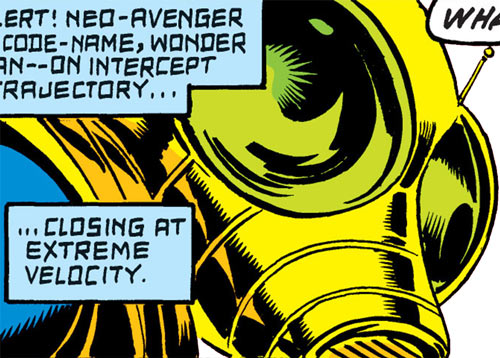 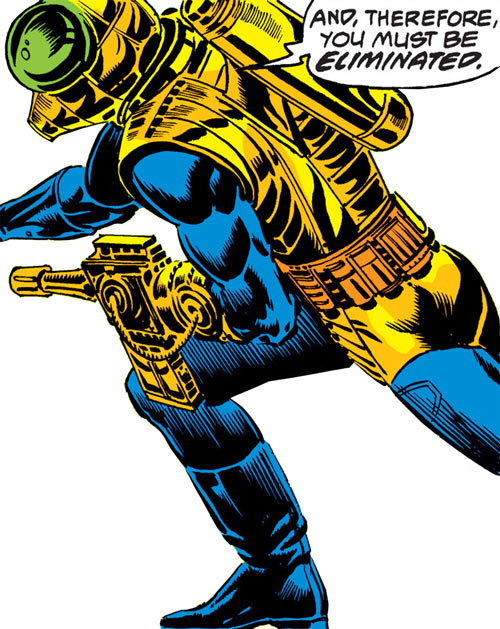 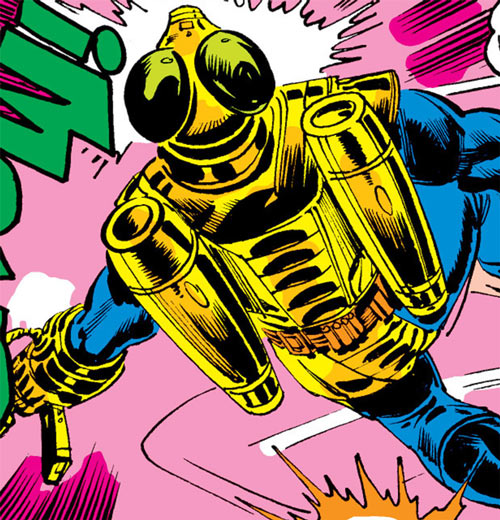