Fairly straightforward, really. He can control soil, earth, rock and the like, and has a special costume with vibroshock units over the forearms.

He’s not terribly imaginative with his powers, perhaps because he cannot visualise complex effects. He mostly erects pillars of rock or open and close chasms a few metres deep.

In 1999 he was paid by the Council to displace African populations through terror attacks. But the newly superhuman Sand sensed the seismic shocks from Geomancer’s intimidation tactics and defeated him. 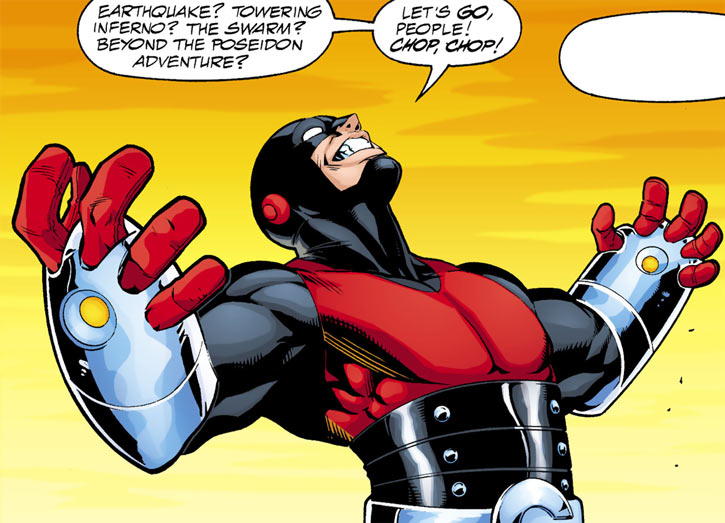 Feeling that he had been unfairly defeated (which was not the case, really), Geomancer was recruited by Johnny Sorrow in the Injustice Society. He was chiefly kept around as a warm body to throw at the JSA to distract them. Sorrow never expected Geomancer to amount to anything. Which he did not, ending up in the hospital after every confrontation.

After the Ultra-Humanite took control of the Thunderbolt genie, he modified reality. Every superhuman and costume adventurer was put in hibernation, Matrix-style. His colleague Icicle II escaped hibernation and tried to free Geomancer from a nearby stasis tube, but accidentally killed him.

Jakeem Williams later had the Thunderbolt cancel every wish made. Whether this means Geomancer was never killed is uncertain.

Before using the vibroshock units on his costume, Geomancer will often put a boxing-style teeth protector in his mouth. One which somehow allows him to talk.

An overconfident brute who wants to be a real tough guy but can’t walk the walk.

He’s also all for pursuing vendettas to defend his rep (which is… not as big as he thinks it is). But that usually ends up backfiring against him since he insists on going against mean fighting machines with decades of experience and lots of Hero Points .

When things get too fast or confusing, or when he’s suddenly left alone, he tends to freeze and hesitate for a spell. Since he’s neither very smart nor terribly courageous (in DC Heroes RPG terms, Uncertainty).

“I was paid a boatload of money to put the fear of God in these mooks. You want to throw yourself in the crossfire ? Be my guests !”

“Look at this place — a frigging ballroom, an aviary. These guys are *loaded*.”

Equipment:
COSTUME [/BODY/ 06, Shade: 02, Vibe: 09. Note – it is quite likely Vibe channels his Power and is not autonomous, unlike the Shocker’s broadly similar weapons.]