Bulman and Truelove can communicate with each other even when Truelove is in the Dead Space dimension.

Bulman has no other powers. But he is a good detective, and is competent with guns.

Truelove is a disembodied spirit who can travel between the world and Dead Space. This dimension actually is the corpse of an extinct god, which serves as a path for souls when they leave the material world. To do so he uses George as a conduit.

Bulman and Truelove were police detectives working together on an investigation involving pygmies in the underground. However, Truelove was killed because of Bulman. The pygmies cursed them so that Truelove’s spirit was tied to Bulman, unable to go to its final rest, and able to return to the material world through him.

They were eventually recruited to the Establishment. This was a secret British government-sponsored super-group, which had been protecting Britain since the 16th Century.

They took part in the operation against the Daemonite invasion at Hobb’s Bay. They also fought in the subsequent battle over London, which resulted in the Establishment’s existence becoming known to the public, against its better judgement.

During the operation Truelove helped Mister Pharmacist revive Charlie Arrows, by intercepting Arrows’ soul on its way through Dead Space, and returning it to its body.

When the Establishment went after the Daemonites, they left Arrows in Bulman’s care. Arrows decided he wanted revenge on the Daemonites’ ally. Therefore he knocked Bulman out, intending to leave.

Before he could get far Truelove appeared, trying to stop him. Arrows, using his newly expanded powers, recreated Truelove’s body and forced his soul into it, then knocked him out as well, and left.

Mister Pharmacist managed to destroy the Venusians. The Establishment then used their technology to saturation bomb Venus with a biological agent designed to eradicate the Venusians, wiping out all Venusians. Or so they believed – a few of those on Earth had been acquired by Dr. Orwell.

The Establishment were asked by the Russian government for help battling an outbreak of zombies. They discovered that Russian scientists had travelled to Dead Space, and creatures from there had begun travelling to Earth.

Realising that they had no chance of stopping an invasion from just the Earth side, and trusting that the pygmy curse still worked, Truelove killed himself, and helped close the portal from the Dead Space side.

When they returned to Nowhere, they were met by Mother, the creator of Nowhere. He was standing over Bulman, who had suffered a heart attack and died. He warned them that his brother, Dr. Orwell, was travelling to the end of the universe, intending to replace Metavac.

The Establishment accompanied him. However, they then realised that his intended solution would cause as much harm. They turned against him, only to be easily subdued.

When Bulman died, his soul met Truelove’s in the Dead Space. Bulman forced Truelove to take residence in his body, allowing his own soul to move on.

Truelove, now in Bulman’s body, overcame Mother and freed his teammates. They used the time machine to travel to the end of the universe. But when they reached it they discovered that Dr. Orwell had been replaced in his own scheme by the Venusians, who proceeded to try and destroy Metavac.

While unable to defeat them alone, the Establishment bought time for Charlie Arrows to contact Metavac, and protect it from the Venusians.

Truelove presumably died at the end of the universe.

George Bulman is usually dour and glum. He remains overwhelmed by guilt over Truelove’s death, and feels out of his depth in the Establishment. He usually resorts to getting drunk a lot.

If given the chance to prove himself, Bulman will throw himself into it. But he won’t charge into situations where he knows he’ll just be in his team mates’ way.

Christopher Truelove is outgoing and flamboyant, his enthusiasm being hard to suppress. He’s eager to do his duty, regardless of his condition.

“My lot only needed me cuz‘ I could get ’em Truelove from the afterlife. They look at me like I was a skid mark in their drawers. Alright, so I accidentally got ’im killed and was cursed by a pygmy shaman to channel his soul… but it could’ve ’appened to anybody !”

“You want to know pain ? You should hear my Judy Garland collection. Talk about your tortured soul !”

“He may be a boozed-up wreck, god love him. But he’s the only home I’ve got.”

Christopher would probably be friendly with Deadman.

Bonuses and Limitations:
Telepathy has the Extra-Dimensional bonus (+1), only works with Christopher Truelove (-2), and only when Truelove is in the Dead Space dimension (-1).

All members have communicators, which allow instant communication with Nowhere from any point on the planet [Radio Communication (Scrambled): 20].

They also can all access a storage system, the Floating Arsenal, to access equipment that they may need on a mission. Each member can access an 8AP ABCD Omni-Gadget.

Following his resurrection, Christopher Truelove no longer has his powers. He regains them after killing himself. 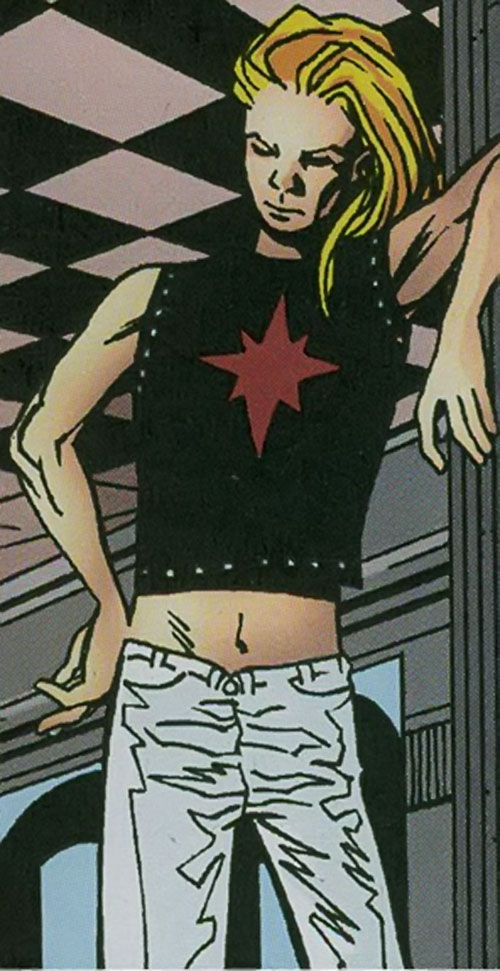