(Adapted from Aberrant: Teragen)
Geryon is exceptionally strong, durable, and quick. All of his physical abilities are far into superhuman levels. He has been recorded hurling riot tanks well over the length of a city block and tearing apart reinforced concrete with his bare hands. His hide is highly resistant to damage and he is immune to anything short of heavy artillery.

Geryon has also demonstrated adaptive shapeshifting powers. Although he can also shift his entire form, he has been known to sprout gills and fins for swimming. Or to shift his legs into quadrupedal form to increase his running speed.

Geryon does not rely just upon his powers and strength. He also employs a highly acrobatic fighting style which incorporates his shapeshifting powers and his enhanced speed and strength. Thus, he has been known to successfully take on up to four, high powered Novas simultaneously without falling completely on the defensive.

Geryon is a self-righteous fear monger. He is out for vengeance on the “baselines” for discrimination against “The One Race” (Novas). He is an extremely vocal Nova supremacist.

Geryon lives by the rule of “an eye for an eye”. In Geryon’s case “if they take your eye, you take both of theirs, then do unmentionable things to their eye sockets.”

Perhaps his only redeeming feature is his refusal to take the life of another nova. This is a small mercy, as he has no compunction against permanently crippling nova opponents as a demonstration of his power. While he is easy to underestimate as a stupid thug, he is actually quite eloquent in his defense of his beliefs. Words he consistently backs up with violent actions.

Next to nothing is known about Geryon. His name is James Booth and he is, based on his accent, English. He is apparently a founding member of the Teragen. Geryon is easily one of the 10 most feared Nova criminals in the world.

He and his Teragen terrorist group, Nova Vigilance, came to prominence in April of 2007. That’s when a member of Geryon’s group, “Sluice”, peacefully defied a city ordinance in Tampa, Florida, against novas. The members of Team Tomorrow arrested Sluice in an attempt to uphold the Tampa law.

Geryon (believing that Sluice was bound for one of Project Utopia’s Rashoud Facilities for “testing”) began his plan for revenge. He appeared on the talk show, “Two Minutes of Hate” to vent his anger about the situation.

Two months later, Nova Vigilance made a raid on Tampa. Geryon twisted off the head of Tampa mayor Frederick Rupert. When high-level members of the Teragen in Divis Mal’s inner circle came out in favor of Geryon’s actions, it made Geryon’s reputation. It also weeded out the “poseurs” from the dedicated, more radical members of the Teragen.

His next mission of significance was the assassination of South African Minister of Home Affairs, Malcolm Chigwedere. Beset by nova elite mercenaries from Nigeria, the South African government began requiring their native novas to wear tracer/homing devices (à la “Lowjack”).

Geryon, along with Leviathan (an amphibious, dragon-like nova), Confederate (both a nova supremacist AND a white supremacist) and Epoch (a nova serial killer who uses his powers and mercenary occupation to “weed out” novas that he feels are corrupt) made the journey to South Africa and eliminated Chigwedere. This led to a frightened elimination of the lowjack law.

Geryon, along with Nova Vigilance, has had numerous battles with Team Tomorrow. While they’ve never been victorious, neither has Geryon ever been captured by T2M. He believes that if Caestus Pax hates him, he must be doing something right. He also has a running feud with DeVries Agency elite Lotus Infinite.

He is large and very quick and fluid at shapeshifting parts of his body. As a result, there are at least three conflicting pictures of Geryon in Aberrant: Teragen, all by different artists.

His face appears to be human. But his body is often amorphous (yet still humanoid) with anything from wings to feathers to fur to bizarre fleshy appendages growing about his chest and shoulders.

“To those who want to emulate the children in Italy who hanged a classmate because they thought he was a nova, you had best be on good terms with your creator. And to any baseline who wants to stop me : you are cordially invited to kiss your arse goodbye.”

If this were Marvel, it would be easy. Hardcore Acolyte or longtime member of the Brotherhood of Evil Mutants. Perhaps one too impetuous even for Magneto or Mystique’s tastes).

In DC, there isn’t the same anti-superhuman bias, so he doesn’t have quite the same niche to fill.

Notes:
Geryon can use his Acrobatics while declaring a Dodge action AND attack in the same round by taking Multi-Attack penalties.

Drawbacks:
Arch Enemy (Lotus Infinite), Serious Rage, Strange Appearance, Miscellaneous – Geryon will not kill another Nova intentionally (even while suffering from his Rage), but this compunction is limited ONLY to killing itself – if Geryon goes into a Rage against a Nova opponent, he will still enter Killing Combat, but with intent to cripple or maim permanently. 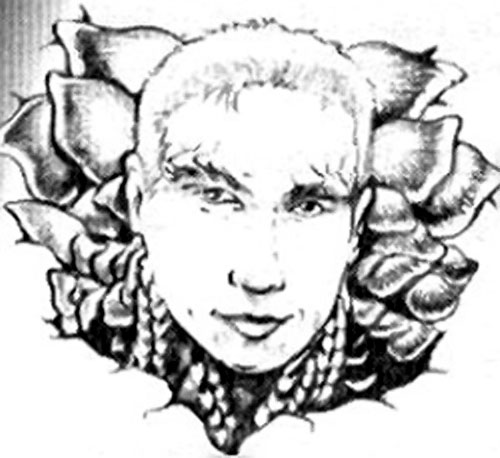