The Ghetto Blaster armour is just an armoured suit which projects shock pulses from the wrists. It also has a pectoral cannon, which may be useful for a surprise attack.

Its capacitors can absorb energy attack and use them to overclock the suit.

The Ghetto Blaster was a Gotham thief. He scored one lucrative heist, but was arrested shortly after. He managed to hide his booty in an abandoned building in a Gotham ghetto, however. But during his stay in prison, the thief was caught in a brawl. He suffered a concussion that made him forget the exact location of the loot.

Once he got out, he somehow procured an advanced suit of armour. From there the thief started looking for his loot by demolishing buildings in the black ghettos of Gotham. Being charismatic, he claimed to be striking a blow against The Man and fighting for the brothers by doing so. This line went well with the locals.

Ghetto Blaster was however stopped by Black Lightning, who made him confess his ideology had been a self-serving sham.

Big on early 1980s Black liberation rhetorics, but will quickly drop those pretences if pressed hard.

“You wanna protect those firetraps, those breeding grounds for vermin, those hangouts for pushers and junkies ? The man says he can’t put them down, can’t put up housing, cause of the rules ! But you tell them this, boot-licker – if the man can’t put down those slums, the Ghetto Blaster will !”

Source of Character: Batman and the Outsiders #21. 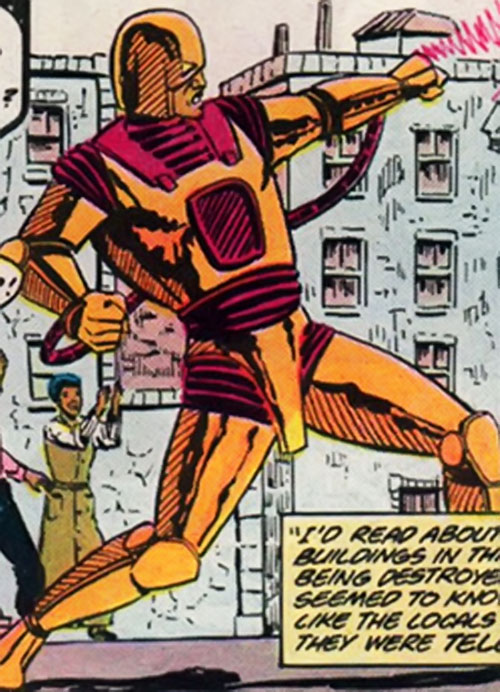