Ghilkyn is an experienced adventurer and troubleshooter, and a superior fencer. He can defeat five or more armed opponents, though admittedly these men were rabble, or fight groups of monsters.

Ghilkyn is a fine blade indeed. Though he’s not a combat monster on the level of his ally Claw he can fight at his side without being out of his depth.

He’s a good horse rider, and knows just enough ritual sorcery to get himself into trouble. Thankfully he also has a knack for getting out of trouble, by running away if need be – his Hero Points  score is very solid for the genre. He counts on those and his Skills to save his hide when he involved himself into misadventures.

Ghilkyn sounds well-educated and intelligent. And he does have a certain wisdom to ride along with his smarts.

Ghilkyn the Hill-Prince comes from one of the 15 worlds of Claw’s cosmology. Namely Awadaka, apparently one of the seven worlds of law. Feeling too safe, he dabbled in sorcery to spice things up. Then he made a mistake and was wrenched from his dimension and cast into Pytharia, the linchpin world of the 15 worlds system.

Crossing the dimensional void mutated him, and he acquired a pair of small demonic-looking horns on his brow.

Still craving excitement, Ghilkyn became a wanderer and adventurer in this brave new world. Presumably, he was already a master of key skills for this endeavour, such as swordplay.

In Kall-ryn-dassa, a minor trading post, the adventurer stumbled on a lone barbarian warrior beset by a dozen men. Finding these odds intolerable he used his sling to knock out a man that was about to kill the warrior from behind. Ghilkyn then joined the fight.

After they took out their opponents and fled from the village, Prince Ghilkyn and Claw the Unconquered introduced themselves to each other.

The two men rode together for a short while. As they did, Claws’s nemesis Occulas of the Yellow Eye had his court wizard conjure a monstrous chaos giant, N’Hglthss the Damned, to kill the barbarian.

N’Hglthss couldn’t be stopped. And it slowly became obvious that the drowsy, slimy giant would simply massacre everything it encountered until the end of times.

With the help of a local girl accused of conjuring the thing, Ghilkyn and Claw asked for omens from the cursed sage Asvitar the Burning Man. Asvitar told them about the enchanted sword Moonthorn and how it could kill N’Hglthss.

The altruistic prince was quite ready to embark on that quest. Claw was more reluctant. But after seeing the effects of N’Hglthss’s passage through a hapless village he grudgingly agreed to accompany Ghilkyn. 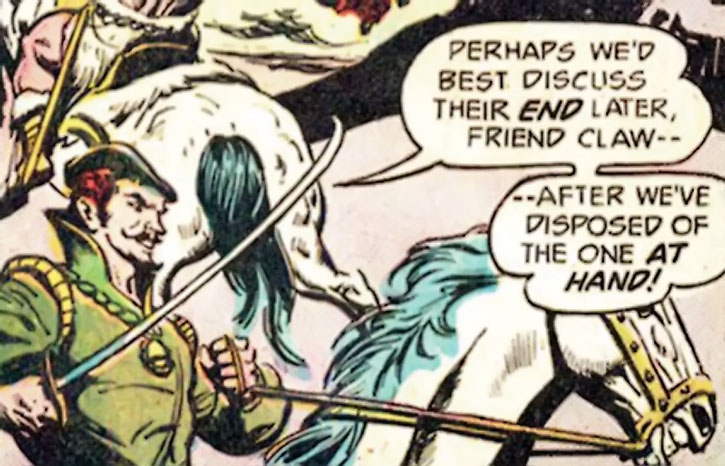 This storied quest took the two men to a number of strange locations and stranger dangers. They were eventually successful. N’Hglthss the Damned was felled and untold lives saved. When he retrieved Moonthorn, Claw became aware of his heritage and decided to leave to avenge his father.

Though the Hill-Prince was reluctant to let his friend go alone, he understood that it was a matter of honour. Therefore, the two men parted ways.

One of the unfinished Claw stories featured a sequence where Ghilkyn was tricked by a disguised Shadow-God, who told him there was a man with a clawed hand dying nearby and that he needed help.

Ghilkyn was captured by some sort of tentacled chaos creature, then tormented by demons. From there he would be turned into the new champion of chaos after the death of Occulas of the Yellow Eye at Claw’s hand.

What happened next remains unrevealed.

Men in Tights, indeed. Ghilkyn also has pointed ears, though he seemed to consider that those, unlike the horns, were normal.

He’s a Neutral Good  adventurer with a swashbuckling, flashy manner. He likes the sound of his own voice and has a pretty large vocabulary.

He also likes women. Ghilkyn spends time wenching (playing up his exoticness and little horns) and is always willing to rescue maidens without asking too many questions.

The latter is tied to his preference for supporting the underdog. He comes from a world of law and helping oppressed folks, rescuing victims and physically intervening in unfair situations all come naturally to him.

(As Claw and he are chased by a mob) “Well, as my old uncle Fal-Dharen used to say in times like this — ‘flight makes right’ !”

“Unfortunately, there are also voids between planes — places of unspeakable evil. And my unwitting passage through one such area resulted in these rather unique… protrusions.”

“Kurah must have conjured these beasts from our minds, from the terrors of our past ! They feed on our fear ! Which means the only way to destroy them — is to stop fearing them !”

“Think, Claw ! Is this what you would destroy ? Is this innocence the price paid for one man’s obsession ?”

Ghilkyn, Prince of the Thousand Hills

Bonuses and Limitations:
Martial Artist is only useable when wielding a light sword.

Drawbacks:
Creepy Appearance (Horns). Technically he has Exile, but that doesn’t actually bother him much. 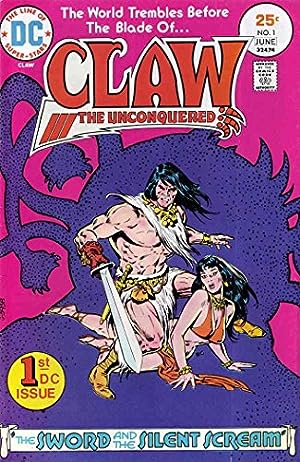 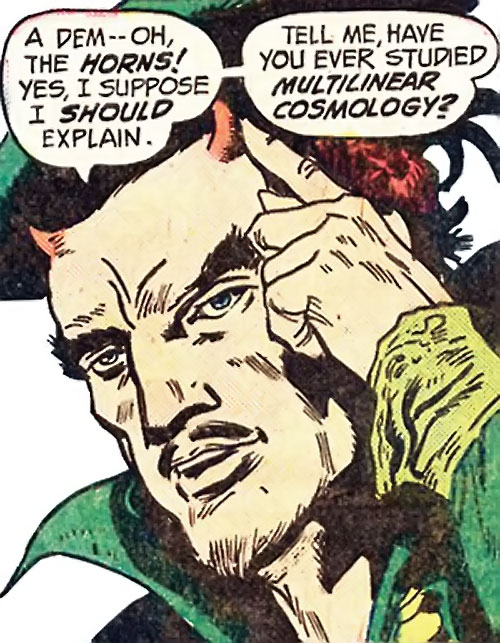 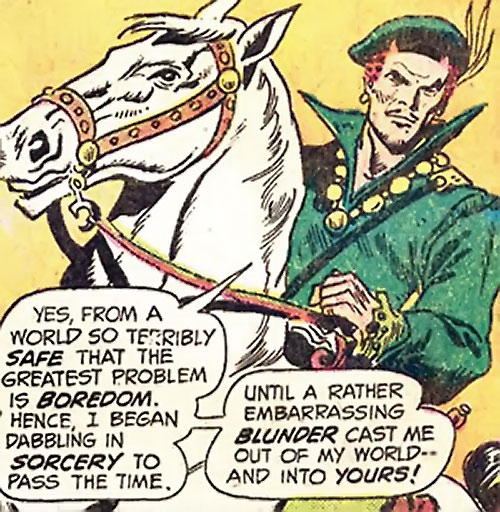 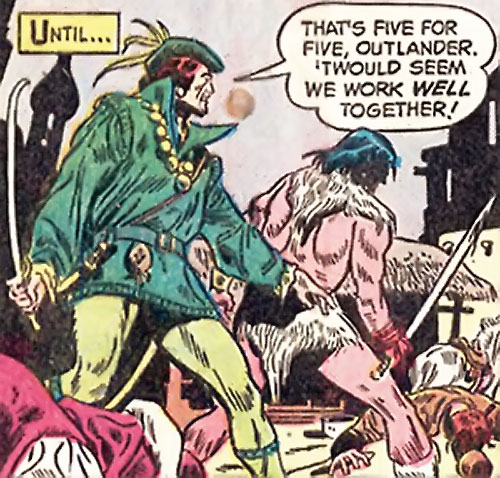 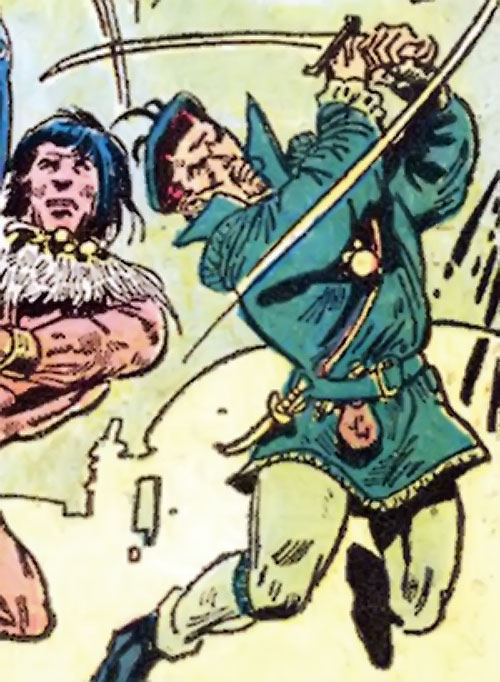 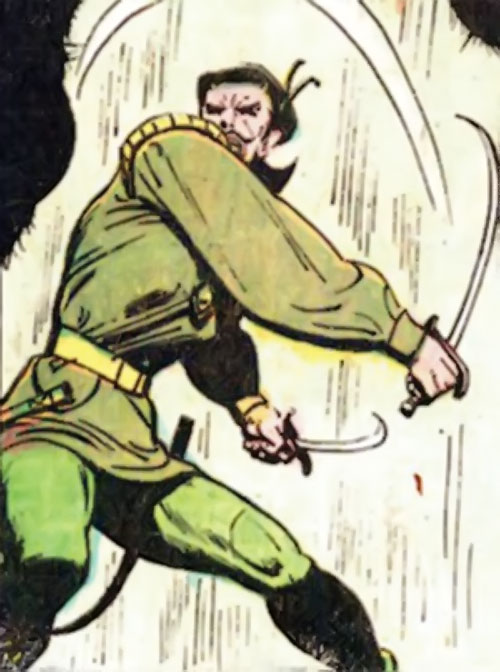