Coming from another dimension near to the realm of death, the Ghost Fox Killer (no relation) seems to have ghostly attributes, including:

The touch of death

Furthermore her touch is fatal, killing anyone she comes into contact with. 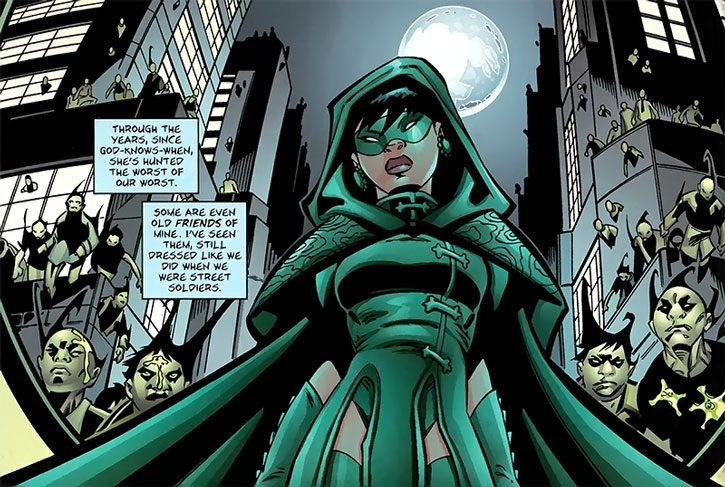 Anyone killed by Ghost Fox Killer’s touch doesn’t pass into the afterlife. Instead their spirit gets bound into her service to maintains the stability of her homeland. Serving her, the ghosts act as scouts and spies, or occasionally for intimidation. But they can’t affect the physical world unless in her presence.

One ghost acts as her chauffeur, driving her around in a ghost 1920s limousine. The ghosts’ presence also feeds energy back to her homeland, which allows it to survive.

Ghost Fox Killer also wields a pair of guns. These fire some kind of mystic bullets which have even caused Black Adam pain.

Ghost Fox Killer is always accompanied by her Jade Lion. A living jade statue, this silent entity accompanies Ghost Fox Killer wherever she goes, acting on her command. It was destroyed by the Accomplished Perfect Physician during the recent return of the Gods, but it has been suggested that she may be able to gain a replacement.

One of her contacts in the Hong Kong underworld can provide information or troops, supplementing her ghost army.

[In Chinese mythology, Huli Jing are fox spirits, who may be good or evil. It’s believed all things are capable of acquiring human form, magical powers, and immortality. But to do that they must receive sufficient energy, in such forms as human breath or essence from the moon and the sun.]

Land of the Ghost Fox Women

Coming from the land of Ghost Fox Women, perched upon the Twilight Realm just beyond the Veil of Death, Ghost Fox Killer’s mission is to regularly spill the blood of evil men. In this way she anchors her world to Earth, so that it doesn’t fade into the ether.

Setting up in Hong Kong, she began preying on its mobsters, becoming a myth within their community. She wouldn’t kill them all, and would recruiting a few promising ones to serve her when called on. A number of such recruits have risen in the ranks over the decades she’s been there. 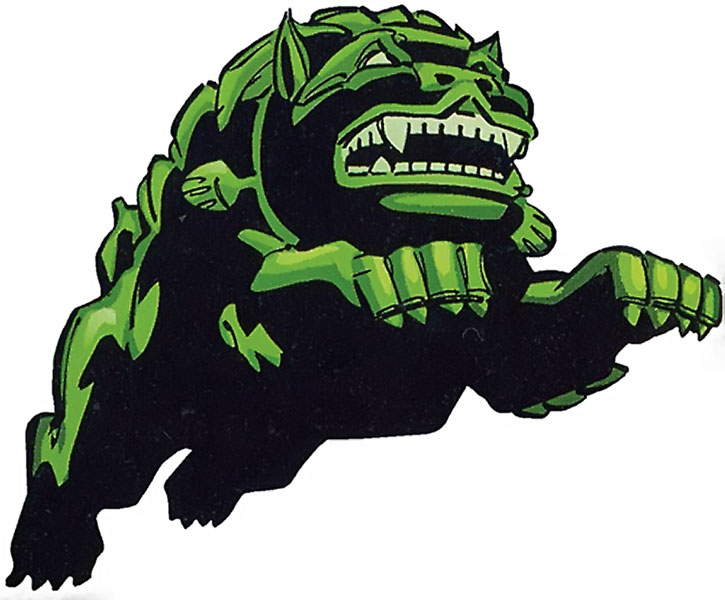 Having little interest in the wider world, she nevertheless caught the attention of the Chinese government. They sent the August Captain in Iron to investigate the suspected metahuman. He tracked her down, and she was surprised to discover her touch didn’t kill him. He was equally fascinated by her, and a relationship developed between the pair.

When the Great Ten was formed, Ghost Fox Killer accepted a place on the team. But that was more for the August General’s sake than any interest in China’s well-being, or a belief it would further her mission.

Her Jade Lion was destroyed by her team mate Accomplished Perfect Physician after she’d sent it to run down another team mate who’d appeared to desert them.

Already disliking the Physician, due to the August General’s dislike of him, this act engendered a stronger hatred towards him.

Fierce and unrelenting, the Ghost Fox Killer is devoted to her task. The survival of her people rests on her killing evil men. She has no remorse for those she kills, although she’s careful not to harm the innocent. Fox has no hesitation entering battle, even against the strongest of opponents, and never exhibits the faintest hint of fear. 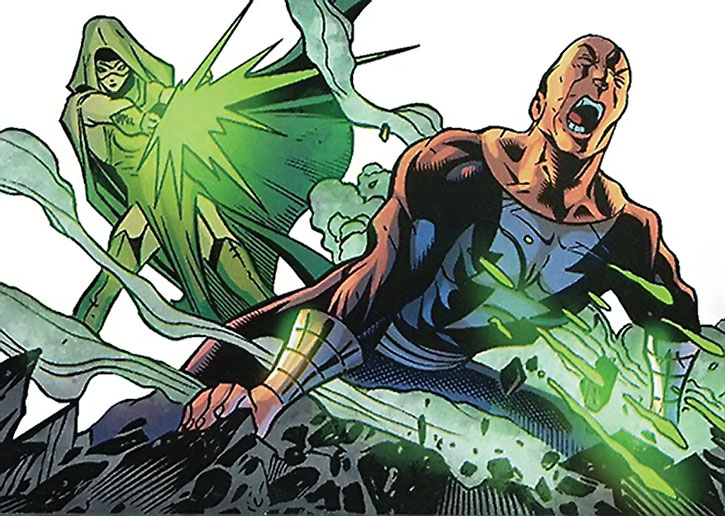 The only time she shows any kind of softness is when alone with the August General. She seems to share a genuine affection with him.

She has little loyalty to the Ten, or interest in toeing the Party line. Fox serves on the group only out of her personal loyalty to the August General, and dislikes the more liberal members of the group because he does.

“The lack of control over the Americans threatens even the Ghost Fox Women of my homeland. Just let me kill these two and add them to my legion of spirits !”

August General in Iron: “My apologies for keeping you waiting.”
Ghost Fox Killer: “No man keeps me. My touch is death. But you, General Fang Zhifu, remain the only one for whom I am willing to wait, something I do gladly, if it means a chance to see you again.”
August General in Iron: “You honor me, beautiful spirit… it is… the feeling is shared.”
Ghost Fox Killer: “I know it is, Zhi.”

“There were so many evil men there, I could have powered my people’s astral home for a year with the harvest of their black souls.”

It’s unclear how exactly her touch kills others. I’ve used Spiritual Drain due to it taking the souls of those she kills to maintain the existence of her home dimension, and the creation of her ghosts.

As to why exactly it doesn’t do anything to the August General, I’ve assumed his outer shell protects him. And so I have declared this standard for all Skin Armor, barring contradictory evidence in the future.

In one scene it claims that her ghosts can’t really hurt people and that “you cannot lay a finger on them”. I took this to mean they have no physical form. A few pages later her chauffeur is shown to be a ghost, so obviously they can touch stuff at some point.

I’ve assumed that proximity to Ghost Fox Killer allows them to affect the material world, and I’ve given them Telekinesis for this rather than simply neutralizing Self-Link (Spirit Travel) since they can still only be killed spiritually. Their Aura of Fear is also supposition. 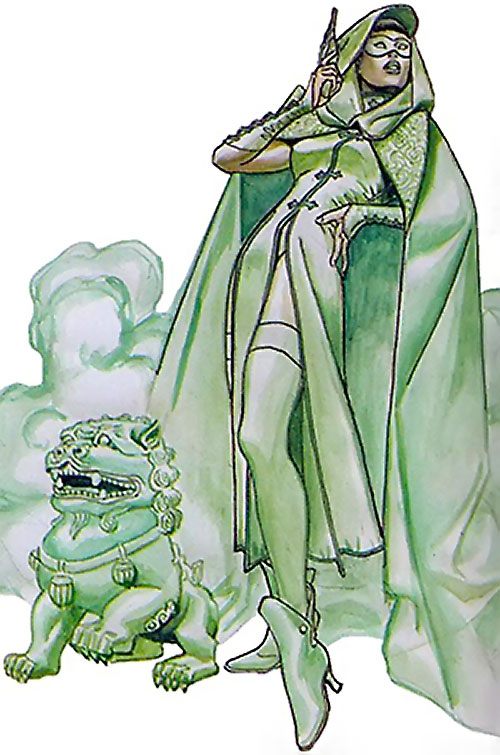 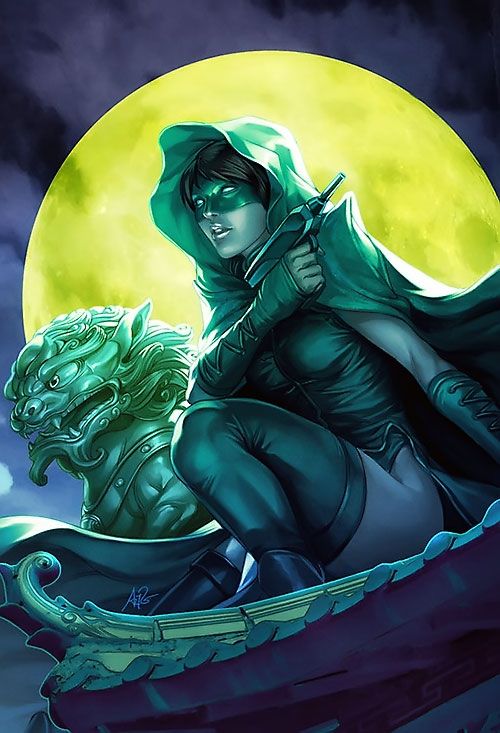 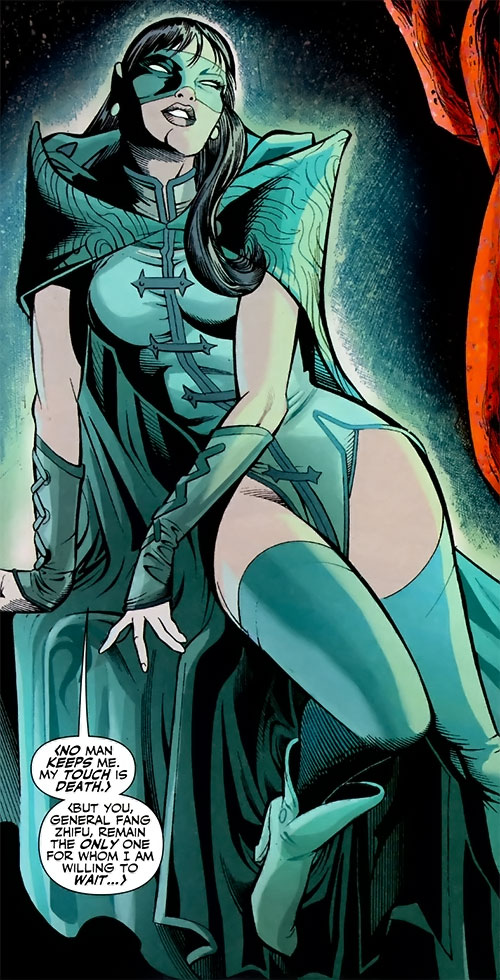 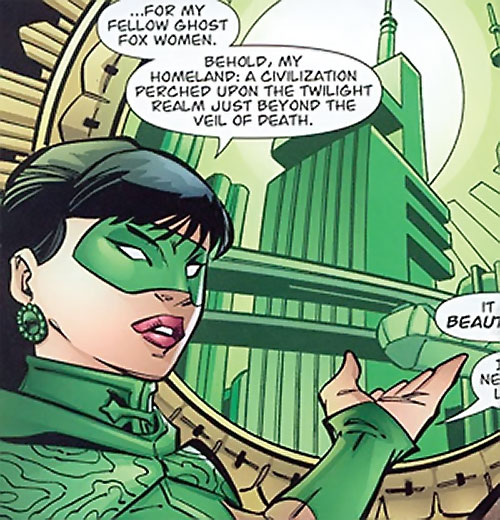