His “Naked Kill” techniques put a strong emphasis on killing blows (in DC Heroes RPG terms, Martial Artist (EV) Subskill). Furthermore, it reputedly include techniques to kill with any ordinary object – from hairbrushes to pieces of paper.

These later skills were not demonstrated on-panel . This is likely because he carries a deadly sword, and prefers to use his bare hands for the worthiest targets. 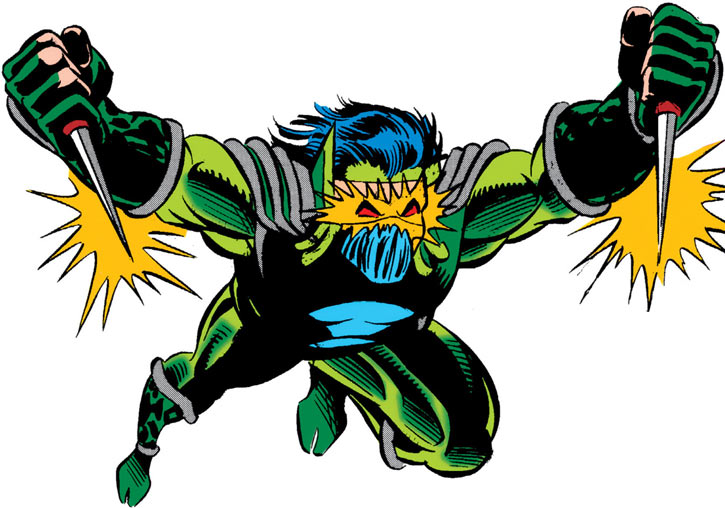 Ever since he’s been resurrected by the Hand, Sovchenko is very resilient to blows and other forms of attacks. Furthermore, he seems able to see in pitch darkness. The Hand also apparently taught him new techniques as he started to always use his weapons in matched pairs, and always throw volleys of thrown weapons.

However, he seems to have lost part of his edge, and operates at a lower tier of agility, speed, resolve and fighting skill than he did as a living man.

As a Snakeroot agent, he carried quite an arsenal. See the game stats section for a listing.

One secondary source stated that he could reform himself after death ever since his first resurrection. But this could easily be apocryphal.

Grigori Sovchenko was likely born circa 1950, since the Sino-Soviet split  occurred during his adolescence. He was part-Mongol (presumably on his mother’s side), and his father was a highly placed KGB official. These factors led to his selection for a special project.

Back in the 1950s, the KGB and the Guòānbú  had a number of small-scale joint projects. Several of these had to do with the training of elite agents and assassins.

Two Chinese martial artists, masters of the obscure “Naked Kill” style of combat and assassination, came to USSR for 15 years to train Grigori Sovchenko from childhood. They turned their pupil into one of the deadliest men in the Soviet Republics.

In what I assume was the mid-1960s, the trainers were recalled home for political reasons. But Sovchenko continued training on his own. He added a number of tricks and techniques to his répertoire, perhaps drawing from KGB techniques.

Sovchenko decided that his initiation ritual as a master would be the undetected killing of ten of the West’s top agents. Once that was accomplished, he code-named himself Ghost-Maker.

The Ghost-Maker killed many, many people for the KGB. But apparently, he never was a model of loyalty toward the State. By the early 1970s he had become a renegade, though he had his own small cadre of KGB men who were loyal toward him.

In 1974, the Ghost-Maker decided to steal a decommissioned British weapon from a base in Sussex. This weapon could seed the clouds in such a way as to trigger an extremely corrosive acid rain. Said precipitations were powerful enough to swiftly kill unprotected humans. This weapon had been deemed too dangerous and unpredictable for use.

At this stage the British services were just looking for a way to safely destroy the chemicals. But the Ghost-Maker intended to use this acid rain to kill Queen Elizabeth II  plus anybody near her.

Thanks to KGB defector the Dark Angel, private intelligence firm Freelance Restorations learned about the Ghost-Maker’s plot. FR agents Leiko Wu, Shang-Chi and Black Jack Tarr went to warn the British military in Sussex. But the Ghost-Maker suspected that something was up and attacked earlier than planned, when the three troubleshooters were still present.

All of Ghost-Maker’s men were killed or incapacitated by the British military and the troubleshooters. Yet Sovchenko managed to defeat the base’s massive security and steal the weapon.

Shang-Chi doggedly pursued him all the way to Paris. During the chase, the master of kung-fu perforated the small canister of acid rain Ghost-Maker carried. Most of the content thus leaked away, and little was left when the two men reached the City of Lights.

As the two exhausted fighters battled, Ghost-Maker managed to shoot what acid rain was left into the sky. But the French weather refused to cooperate. The cloud remained stationary rather than drift toward Paris and the Queen.

An helicopter came to the rescue, and Shang-Chi managed to grab the ladder before the rain started to fall. Having spent every last Hero Point , the Ghost-Maker missed the ladder as the rain came down. He was killed and soon reduced to a bleached skeleton by the secret weapon.

The hand of fate, part 1

The Hand eventually procured the skeleton. They always had an interest in resurrecting great warriors to become their unquestioning slaves.

Ten years after Sovchenko’s death the Snakeroot, a splinter cult within the Hand, brought him back. They plunged his skeleton into a mystical cauldron that rebuilt his flesh.

The resurrected Ghost-Maker was sent after Daredevil and Elektra. He soon found and engaged Daredevil in combat in New York City. But Elektra, having sensed the stench of the Beast, intervened and forced the ex-Soviet to retreat.

The fight attracted the attention of S.H.I.E.L.D., who was at that point working with Shang-Chi. Startled to see the Ghost-Maker running around, Shang-Chi started hounding him.

The hand of fate, part 2

Shang-Chi quickly found the Ghost-Maker thanks to S.H.I.E.L.D. surveillance. He engaged him in a duel. Shang clearly dominated the undead Sovchenko, who stopped fighting honourably and started using his weapons. He tried to dispose of the Master of Kung-Fu using explosives, and both men briefly thought that the other had perished in the blast.

Resuming his hunt for Daredevil, Ghost-Maker found himself martially outmatched again, but his arsenal compensated for this. However, Elektra and Shang-Chi then intervened. Ghost-Maker went all out with all his weapons to repulse his opponents. Catching a sai thrown by Shang-Chi, Elektra fatally stabbed Sovchenko through the head, and the Hand agent’s corpse self-destructed.

The Snakeroot soon resurrected him again. But they decided to purge Sovchenko’s mind from his desire of vengeance against Shang-Chi. That was to prevent a repeat of the incident.

Though placed in suspended animation as he was getting brainwashed, the ex-Soviet swore to himself that he would escape and make the Snakeroot pay. The Hand mental conditioning wasn’t taking as well as it usually does.

Ghost-Maker was allegedly part of an improbable assemblage of Shang-Chi villains. These were somehow trying to flee the US during the so-called “Civil War”.

Since the situation didn’t make sense and the series it happened in presented numerous continuity issues, it is unclear what to do of this.

Before his death, Sovchenko was an implacable assassin. He was proud of his ability to “make ghosts and shape them with his hands”, as he put it. He was prone to expressing himself in this mystical-sounding way, and came across as some sort of death cultist.

Two of his chief objectives — the ghosts he was trying to make — were Shang-Chi (as the greatest known martial artist) and the Queen (presumably as part of the traditional British/Russian rivalry).

After his death, Ghost-Maker is even more certain certain that his skill marks him as the best fighter and assassin in the world. He does not seem to realise that his resurrection degraded his abilities. He’s trying to prove this, by any means necessary.

He has a particular problem with Shang-Chi being considered the best martial artist alive, and wants to prove that he’s better. He also wanted to prove that he was better than Daredevil and Elektra, given their reputation.

The resurrected Ghost-Maker tends to underestimate most fighters, feeling they can’t compare with his skills. When playing him, assume that he has — in DC Heroes RPG terms — DEX 09 and Martial artist: 10 and plan accordingly. That’s how he sees himself.

As a Snakeroot thrall, Ghost-Maker more or less tries to fight with honour, and makes a big show of it. However, as soon as the goings gets tough he’ll cast honour aside without missing a beat. That means switching to his full arsenal and dirty tricks with few regrets.

“I have come to a decision. All other ghosts are nothing in the face of your spirit. I will slay you… and you will become the king of all the ghosts shaped by my hands.”

(Enjoying a stroke of luck) “Fortune is the daughter of Hell… and ever smiles on the maker of ghosts.”

“There is no way you can win, Shang-Chi ! I have devoted an entire life of training to this day – to the ultimate kill — to the moment when I make the ultimate ghost… the Queen of England must die !”

“I’m impressed. You recover well, Daredevil. I am Ghostmaker. I have heard of your reputation against many respected opponents. I have been sent by the Snakeroot. I anticipate your death to be extremely satisfying.”

“Come dance with me ! Prove your worth to die to my Naked Kill !”

“I must have under-estimated him – the time for honour is past.”

“You are marked for death. You deserve no answers !”

An agent for the League of Assassin who fought Batman and the Huntress back in the day. Perhaps he died fighting Richard Dragon when G.O.O.D. opposed a KGB plot.

Ghost-Maker is reminiscent of the KGBeast.

Bonuses and Limitations:
Claws and Projectile Weapons both require Objects Of Opportunity and are both Skilled Powers.

The shuriken used by the Ghost-Maker hold a little surprise. They can be used to attack as any throwing star can, but sometimes one will remain in vicinity of the target. It gets stuck into body armour, stuck into a weapon or shield used to block it, lies in a puddle at the target’s feet, etc.

When that is the case, on the Phase that follows the shuriken attack, the Ghost-Maker can expend a Dice Action to activate the Lightning Power of his throwing stars. This is treated as a Blindside attack, unless the target is fully expecting an electric shock from one of these weapons.

Before his resurrection by the Hand, the Ghost-Maker had the following stats:

Bonuses and Limitations:
Claws and Projectile Weapons both require Objects Of Opportunity and are both Skilled Powers.

In the early 1970s, the Ghost-Maker was accompanied by a special cadre of elite troops, dressed in uniforms patterned after his and specially trained to accompany him. Presumably, those were former KGB troops who remained loyal to him.

Most of these troopers were killed storming the supposedly impregnable Dragonfly Spire base in Sussex. It is unknown whether Ghost-Maker could deploy further troops of this kind – but as a Hand agent, it would have been feasible to turn a cadre of Hand genin into troops very much like his KGB men.

With the influx of Russian military and intelligence mercenaries following the fall of the USSR, it is still possible that he could reconstitute such a cadre.

Drawbacks:
These men may not speak English. 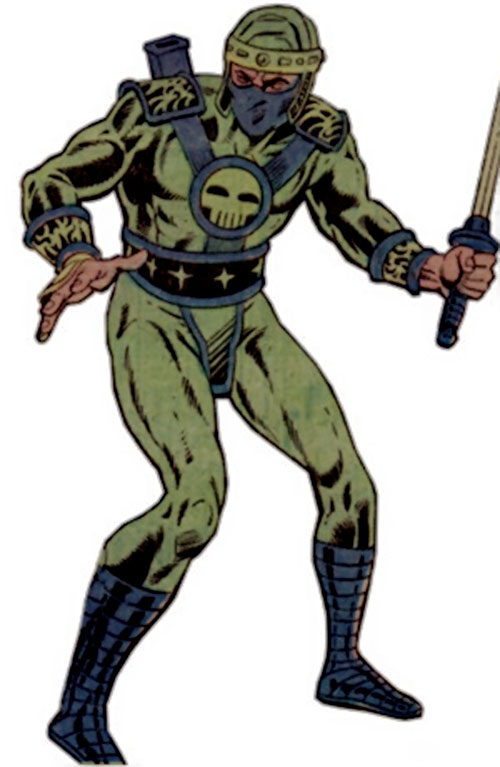 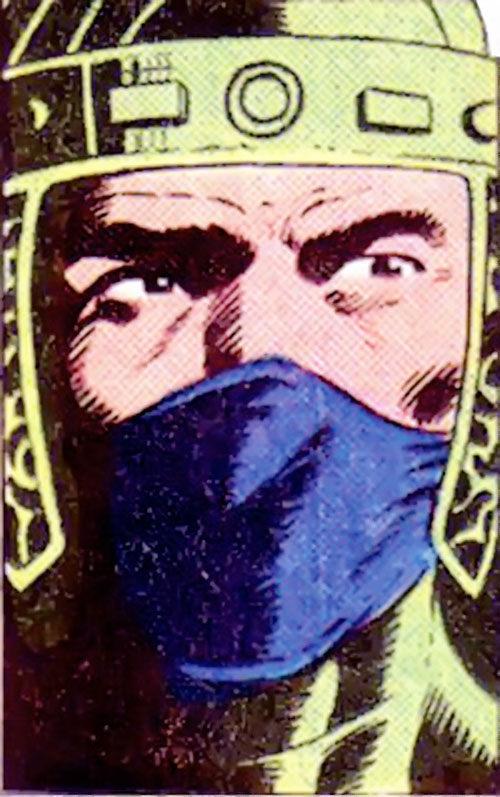 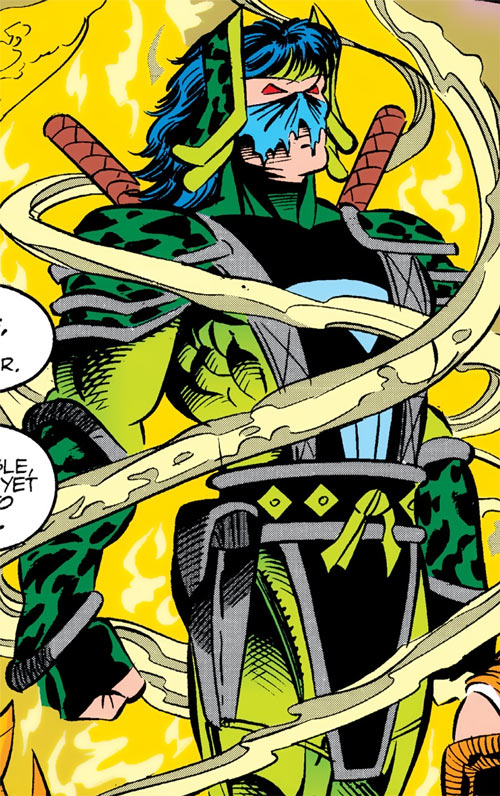