Johnny Blaze is known among motorbike enthusiasts as the top American cycle stuntman, the man who out-stunted Evel Knievel  numerous times. Blaze is now unfocused and out of shape, but he still can perform astounding feats of riding with confidence. He’s also a good fighter and has been around the block once or twice.

The Ghost Rider is a tall animated skeleton wrapped in hellfire. Its level of superhuman strength and durability aren’t as high as they used to be, but the Rider is practically unstoppable. Damaging him is about as easy as harming a hulking, muscular man – but the damage will be mystically erased within seconds.

For instance, a point-blank shotgun blast will make the Rider’s skull explode, but the headless corpse will then get up and the skull will quickly reconstruct itself at its top.

The Ghost Rider doesn’t even try to dodge attacks. In game terms, attacks that miss despite the Rider’s low OV can often be described as connecting without any effect. It happens a lot with the Ghost Rider, since he has no meat to hit.

And I give you… fire

The Ghost Rider can emit hellfire. He usually uses it to torch places associated with bad things connected to its mission of vengeance, thus oddly using infernal fire as a cleansing flame.

He also wears a huge steel chain, which seems to be mentally animated as a fifth limb.

The Ghost Rider seems able to “possess” motorbikes. In DC Heroes RPG he can use his Interface power to call bikes to him and to pilot them with precision even from a range and without seeing them.

A common manoeuvre is to “possess” a nearby bike and have it race to him, weaving among obstacles and crashing through doors until it is close enough for the Rider to jump astride. The “possessed” bike acquires wheels of hellfire and can be imbued with the same regenerative abilities as the Ghost Rider himself.

Although he doesn’t speak at all, the Ghost Rider has a paranormal presence (INF and AUR in DC Heroes terms). It can convey specific concepts just by being there.

For instance, those seeing it will intuitively understand it’s the spirit of vengeance and that it’s there to avenge an unjust death. Yet the Rider never speaks a word, doesn’t make specific gestures and cannot have facial expressions.

Most bystanders will be scared by its appearance and will want to leave quickly, but they’ll intuitively understand it’s not there for them.

People who have heard about the legend of the Ghost Rider (usually bikers, drifters, truckers, maybe some cops such as highway patrolmen) and think a spirit of vengeance is pretty cool will often cheer him and admire him. In many ways, a spirit of vengeance makes more sense than random death, blind injustice and merciless fate.

Likewise, most of his victims will understand its nature and exact mission. Most will accept their fate, as they intuitively realize they can’t possibly destroy or flee from the spirit of vengeance. It takes a lot of fighting spirit to oppose the Rider.

This take on the Ghost Rider is bound by very specific rules of engagement (a CIA, in DC Heroes terms). If a person asks for justice and/or revenge in his presence, it is bound to seek vengeance for them.

The exact threshold is unknown, but this applies if the person asking is the victim of some personal tragedy. Tragedies that count include having been murdered and being dying, the brutal loss of a loved one at the hands of an unrepentant killer, having been forced into a life of crime, etc. 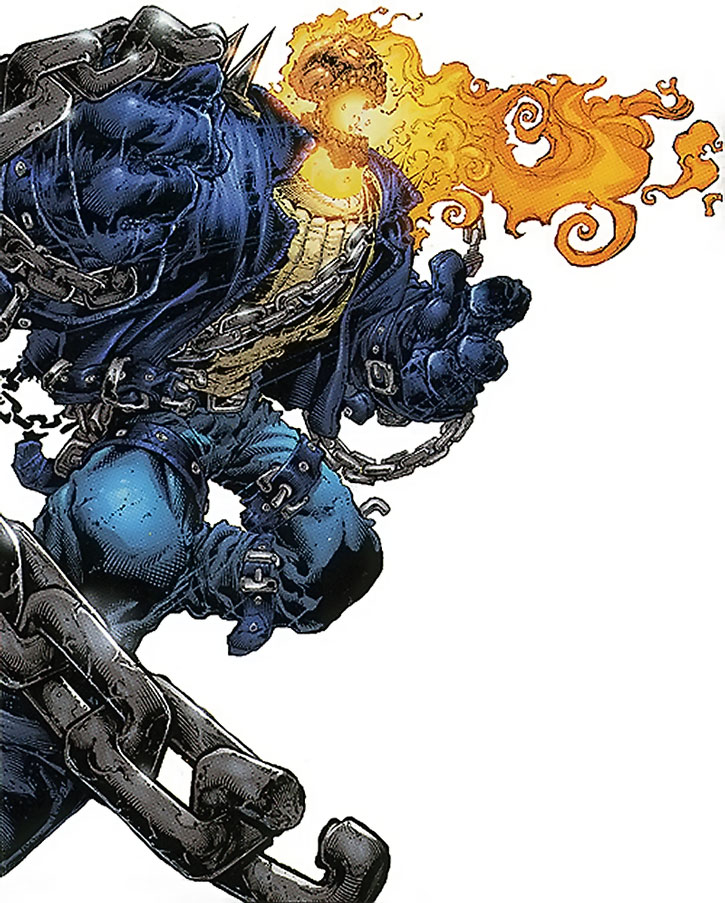 However, it was triggered at one point by overhearing an irate driver cursing a person behaving like an imbecilic nuisance in a traffic jam. Perhaps road rage heightened emotion enough for that to register ?

The Ghost Rider will be intuitively able to track its designated prey and will single-mindedly pursue that vengeance. Its compulsion is so strong and it’s such a one-track mind that it normally will not even fight back if somebody else attacks it while it’s on the path of vengeance. The Rider is essentially a machine with but one goal.

Thanks to the Rider’s supernatural presence, persons in a position to petition it will intuitively know that despite its sepulchral silence. Unless the target of this vengeance have never been victimised themselves, this can easily form a “chain of vengeance”.

For instance, when the Rider killed a drugged-out trucker who had caused the death of a biker in a collision, the trucker asked him for revenge against his boss. It was his boss who had supplied the meth and was forcing him to keep a schedule that was only feasible with drugs.

The Ghost Rider then took down the boss of the trucking company, who asked for revenge against the drug dealers who had sold him the meth. The boss was running his drivers ragged because he was under the thumbs of underworld loan sharks. The drug dealer whom the Rider killed petitioned for revenge against a corrupt cop who was a menace for both pushers and honest people, and so on and so forth.

The Rider himself can never be a link in the chain of vengeance. It’s but an instrument, and its victims intuitively know that they cannot blame it for what has happened. It can also be instantly neutralised if the person who requested the vengeance forgives the target in the Rider’s presence. Forgiveness is the ultimate weapon against the spirit of vengeance.

Gone, gone the form of man…

There are some limits to Blaze’s alter-ego. He can only become the Ghost Rider when a request for vengeance is made in his presence (though the request doesn’t have to be addressed to Blaze). When not on a mission of vengeance, Blaze is but a mortal.

The demonic entity may also refuse the transformation if Blaze is trying to game the system. One example is wanting to turn into the Rider to save his own life. In such cases, Blaze and Ghost Rider can confront each other in Blaze’s mindscape, and Blaze can attempt to persuade the Ghost Rider to trigger the transmogrification .

Gaming the system can also be difficult outside of this. A scruffy maniac demanding from random bystanders that they express a wish for a serious mission of vengeance seldom encounters much success.

Events that used to trigger the transformation (such as innocent blood being shed) no longer seem to work.

During the mid-2000s, Johnny Blaze attempted to leave everything behind and have a normal life. His wife Roxanne had died and one of several powerful mystical entities interested in their children had kidnapped the kids, leaving no clue and little hope of ever finding them.

Blaze worked as an accountant for three years and lived with a younger but somewhat needy woman named Chloe.

As time went by Blaze came to miss his days as a stuntman and adventurer. And one day he just turned into the Ghost Rider again. He assumed that some fragment of Zarathos must have been left in him, though this Ghost Rider operated differently than the previous Zarathos-powered form.

This return of the curse was a serious shock for Blaze. He initially reacted like some alcoholic, unwashed lunatic. As time went by he became able to roughly remember what had happened while he was the Rider and things started to make more sense. He calmed down and started to relearn how to cope.

He broke up with Chloe as he could no longer give her the sort of life that she wanted. Blaze started drifting, riding along America’s roads. It usually doesn’t took long for him to stumble upon a situation that turns him into the Rider.

Blaze sees his reflection in the mirror as the Rider. Presumably other persons with mystical perceptions would perceive this reflection, but ordinary people definitely don’t.

Blaze left behind his often tragic life. He’s now a wanderer letting the roads and highways redefine him. After his initial nervous breakdown, he accepted that he’s again the receptacle for the spirit of vengeance, and even came to enjoy it. It makes for a weird life, but it’s a rush to be on the road again, having adventures and often ending up in crisis situations.

Blaze is no longer a grim leather-clad, shotgun-wielding, shades-wearing badass. He’s now a slightly flippant, confident nomad who flows along with whatever weird events his unique life throws at him. He enjoys himself when he can, and prefers not to dwell on the angsty aspects.

Blaze considers himself a part of the biker and wanderer culture, and enjoys that lifestyle. He’s quite friendly and relaxed with complete strangers. Blaze rarely spends more than a few minutes in a bar or truck stop without striking a conversation with someone.

Blaze usually wakes up disoriented after a Ghost Rider spell. But he has learned to quickly get his bearings and roughly recall what happened while the Rider was in control – emphasis on the word “roughly”.

Furthermore the Ghost Rider can leave Blaze with detailed instructions on what it wants to be done next. For instance Blaze will know that he is to ride to such and such town and locate such and such person, and will have a vague sense of the reasons.

When this “downtime” is over, the Rider resurfaces.

This version of the Ghost Rider is a single-minded, violent, one-track agent of vengeance. An occult, burning, silent Terminator. It doesn’t hesitate to kill its prey and their accomplices. The Rider doesn’t seem to really care about collateral damage. If it has to blow up a building or crash a trailer rig across the road, it will.

This will probably not kill or maim innocents, but may well result in considerable material damages and several people wounded. Perhaps this Rider considers that no one is truly innocent.

It’s essentially a mystical machine, solely focused on its mission but having a choice as to how to execute on it.

Blaze would have been manipulated long ago by Baron Winters, and have operated at the fringes of the DCU for a while. He would have encountered the Swamp Thing a few times, and have been a member of the Hellenders.

This version of the Rider, compared to the one popping up every night when the blood of innocents is shed, makes fewer waves. It travels a lot, is less powerful, and often operates in backwater places. It is thus easier than most versions of the Ghost Rider to port over to the DC Universe. It could easily have been there all along.

The Rider could also be inserted in the Demon’s biography. For instance Zarathos was conjured to oppose Etrigan after Etrigan was bound to Jason Blood’s soul. Jason Blood and Johnny Blaze might even be contemporaries from Arthurian times, both immortal as a result of their possession.

Advantages:
Iron Nerves, Life support (full), Misc.: Doesn’t have a living soul and is thus immune to attacks on such.

“Just had to come to terms with some stuff. You know, like hosting the Spirit of Vengeance, and having no control over such a morally disputable affiliation, but totally getting off on it.” 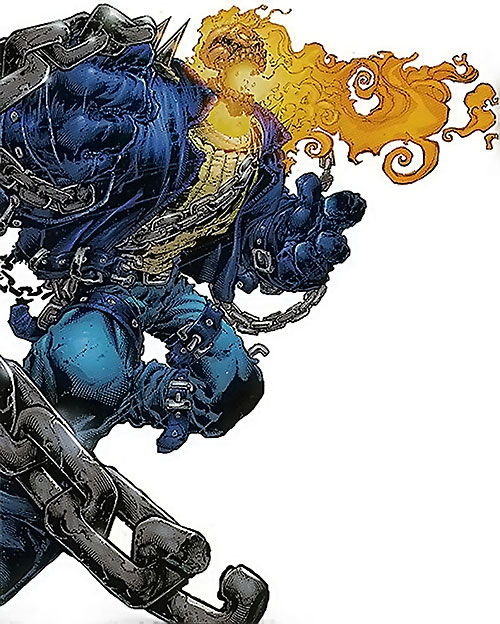 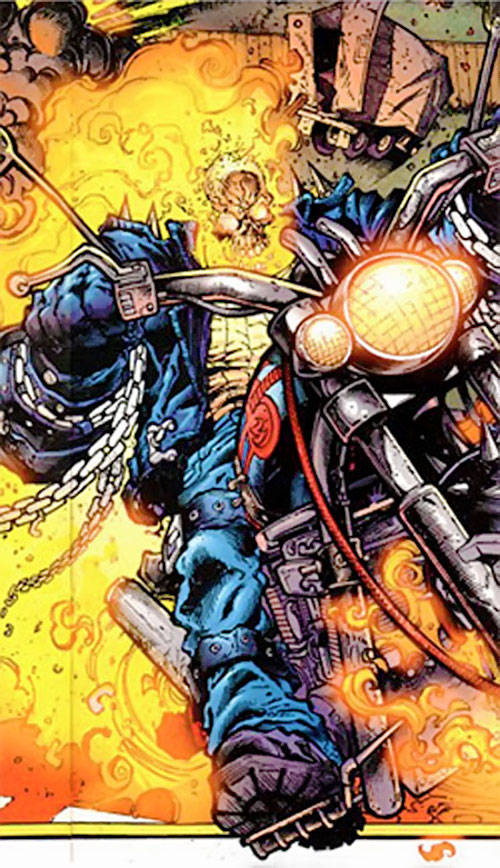 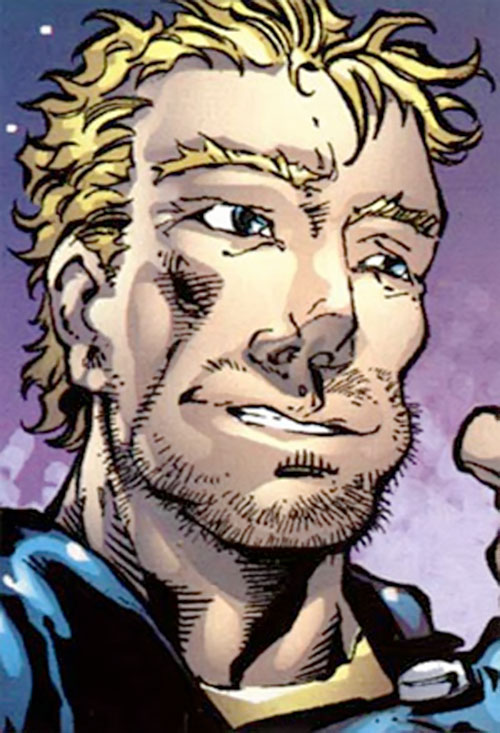