Ghoul is one of the Jokerz, a colourful Gotham street gang. These guys appeared in Batman Beyond. This well-regarded 1999-2001 animated series took place in a possible future of the animated DC Universe.

Ghoul is basically the Jokerz’ tech guy. He is the one who does the necessary legwork to find suitable tech to steal. While this is not shown he seems to be the most likely person in the group to cover the actual planning and breaching of security systems. He may well have other technical skills not demonstrated in the movie.

He isn’t afraid of getting his hands dirty and will most certainly wade into combat. However, he’s not much more effective than the average mook would be.

A jaded young runaway from a wealthy home, Ghoul joined up with the Jokerz for kicks. He’s heavily into techno-goth music and has adapted the horror look into his costume.

The Jokerz have no connection to the criminal master mind The Joker who terrorized Gotham City in an era gone by. The on exception is the Dee Dee twins, who don’t seem to be aware just how close to the original they are. It seems highly likely that they merely grew out of the mythos that the original laughing man had created.

Ghoul was one of the few members to be recognized as elite, most likely because of his vastly superior technical skills. In a lot of ways he’s part of the brains behind certain aspects of their technology heists.

When the original Joker came back to haunt Gotham City decades after his alleged death he saw these foolish and impressionable thugs as easy recruits. He then sent them on a series of thefts to steal the technology he needed to put it in his terms “once again give this town a wedgy.”

The thefts proceeded smoothly at first. At least until the new Batman got wise to what was going on and began interfering with their plans. When the Jokers showed up to steal more technology Batman was waiting for them.

After a brief scuffle the Jokers attempted to make their getaway with the stolen goods. Woof and Ghoul stayed behind to delay Batman, but were handily dispatched. This allowed Batman to pursue the others and ultimately foil the heist.

Later on, while the Joker and the rest of the gang were distracting both the Batmen of new and old, Ghoul and Chucko were able to make off with the tech they needed to complete the Joker’s ultimate weapon.

After that the Joker sent them to silence Price, who had been the Jokerz silent accomplice in the previous heist. But Batman showed up at the last moment and saved Price before turning him over to the police.

A lot happened after that. But when it came down to the final showdown with Batman Ghoul tried to sneak up on the hero, but was knocked out cold with a single backhand.

In an alternate future Ghoul was shown to be among Chronos’s thugs. He was now able to turn his right hand into a vicious buzz saw. He didn’t really seem terribly effective in combat compared to the other Jokerz who were giving the Justice League all sorts of problems. But then again combat has never been his strong suit.

He was also instrumental in Chronos’s defeat. Ghoul foolishly walked into Batman’s trap and was subsequently taken hostage and provided the vital information that ultimately allowed the Justice League to defeat Chronos once and for all.

Ghoul dresses in a type of scarecrow motif complete with pointed brown shoes, ragged brown pants, an orange and black jack-o-lantern shirt. He completes the outfit with a pointy witch’s hat.

His skin is chalky white covered in various stitch marks and his face is painted to look like a jack-o-lantern skeleton come to life.

Ghoul’s obviously a lot smarter than the rest of his teammates. Although he wants the same stuff — having fun and making money — he’s a lot more level headed about it. He doesn’t take stupid risks if he can avoid it.

He’s generally the quiet guy who kind of sits in the back. Ghoul doesn’t say much unless it’s worth saying or at least until he comes up with a decently witty line. He does usually appear to be a bit more well spoken than the rest of the gang most likely because he’s the only member who ever received a decent education.

Security Guard: “Stay back !” (levels his gun at the incoming Woof who knocks it away and proceeds to claw up the guard)
Ghoul: “He should’ve said heel.”
Woof: (laughs)

Joker: “Ghoul, my boy we’re going to need another system scanner. Who’s got one they’d be willing to donate ?”
Ghoul: “Checking.” (clacks away on a keyboard) “What we’re after is cutting edge. These are the only other places we’d find one.”
Joker: “Nope. Uh-uh. Nope. AH !”
Ghoul: “What ? There? Security’s going to be tight.”
Joker: “Oh, yes, but think of the fun.” (grins psychotically)

Price: “You got the equipment you wanted. I gave you the security codes you wanted so you could ransack the lab, and those bunglers tried to kill Wayne.”
Chucko: “Word is Wayne’s terminal anyway.”
Dee Dee 1: “That means you get to stay top dog.”
Dee Dee 2: “And everyone’s happy.”
Price: “So why’re you here ?”
Chucko: “The big guy who originally put us all in contact has decided that you’re a loose end.”
Ghoul: “And loose ends should be tied up.”

Equipment:
He commonly carries around an reinforced trick or treat bag most likely to hold his gadgets in, but he does occasionally use it as a melee weapon. Bag [BODY 03 STR 02 (for holding purposes only) EV 02 (0 w/ Str) R#2]. Other than that he’s been seen using:

Bonuses and Limitations:
The claws are actually his ability to turn his right hand into a buzzsaw. It being cybernetic in nature failed when Static hit it with a blast of electricity (Attack Vulnerability -2CS RV). It also takes an automatic action for him to switch from his regular hand to the buzz saw.

Equipment:
He opened the fight by throwing his trick or treat bag into the air which then emitted firework like sparks that were very effective at melting everything. Trick or Treat Bag: Flame Project: 9 area affect, Grenade Drawback. 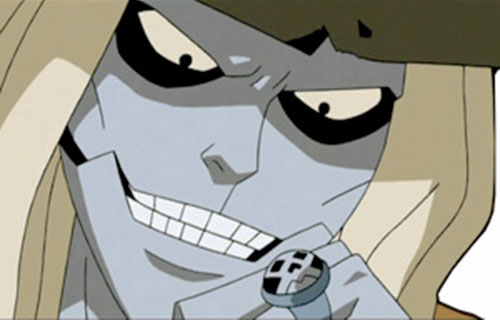