During the 1960s, DC Comics published a series of surreal stories called The War That Time Forgot.

The G.I. Robot appeared during these stories, fighting giant dinosaurs. He was memorable, and more G.I. Robots would appear over the decades in DC Comics books.

In the writeups.org G.I. Robot profiles we’ll attribute a Mark to the successive robots (Mk1, Mk2, etc.). These numbers were not actually used in-universe – they are writeups.org labelling so readers can easily tell in which order the robots were deployed.

“Joe” is an android – while fully humanoid and having common human proportions, it’s obviously a robot made of plastic and metal.

”Joe’s” main asset is its endurance. It never sleeps, never tires, needs no comfort, is immune to psychological stress, needs no food and little if any oxygen, can swim or walk for as many days as necessary, etc..

Though it needs maintenance and overhaul, the G.I. Robot can operate in hostile environments with unrealistic ease. Mud, sand, humidity, grit, sea water, etc. do not hamper it. It can reliably work in rivers and jungles for days on end.

The robot also has a clear, but not massive, degree of superhuman strength. It can easily lift a man in full battle kit with one arm, jump high in the air from a standing start, or absorb the shock of a parachute landing.

The G.I. Robot’s form is human enough that it can outfitted with a uniform, US Airborne helmet, regulation parachutes, etc..

Normally, the G.I. Robot only acts when given a clear order. However, it has a superior artificial intelligence, even by 2022 standards.

For instance, if ordered to open fire without any further detail, it will correctly assess which objects are the ones most likely to be designated targets. Then correctly select the target with the highest priority (for instance, an enemy about to kill an ally).

The main limitation is that the android needs to hear an order to act. Its sense of hearing is about as good as an average healthy human’s.

Later on it was given a photosensitive chest panel as an alternative input method. Shining a flashlight at specific sections of the panel gave orders to the robot.

“Joe” seemed to learn as the missions went on. It originally had trouble distinguishing linguistic context and determining which actions might be dangerous to humans. But it unerringly learned from its mistakes.

The G.I. Robot is an excellent parachutist, swimmer, firearms operator, etc. despite the complexity of these skills. It was at least as good a shot as Mac the U.S Army Ranger, and quite probably better.

”Joe” even knew how to perform common American military practices of the time. Such as rapping the steel helmet of a bazooka operator to signal that the rocket launcher was now loaded. 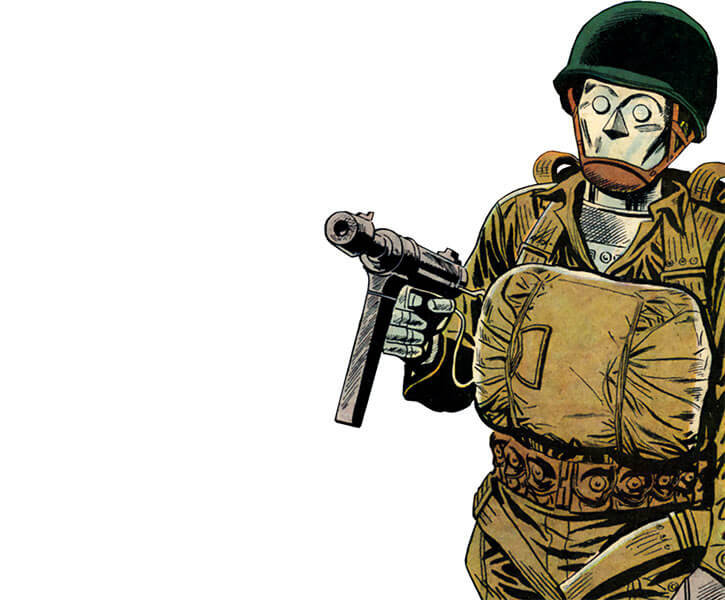 The G.I. Robot program apparently dates back to World War Two. It is likely that it was a strange offshoot of the industrial mobilisation program of 1941.

Though the prototype robot nicknamed “Joe” is the first documented model, it was introduced as “the new G.I. Robot”. Whether that means that there was a previous G.I. Robot is undetermined.

When first seen, the G.I. Robot Mk1 “Joe” was escorted by a US Army Ranger. Historically, in the South Pacific Theatre, this would mean that this deployment took place in the Summer of 1944 at the earliest.

Later models of G.I. Robot androids were built by MIT researchers. It seems reasonable to assume that all wartime G.I. Robots — including the Mk1 “Joe” — were built at MIT, though I am admittedly biased.

Historically, the fit is perfect. In 1943, leading MIT specialists such as Walter Pitts  or Norbert Wiener  (who developed automatic anti-aircraft guns) were making early breakthrough in the field.

One of their students, Marvin Minsky  , would go on make most of the major breakthroughs behind early A.I. research and co-found MIT’s Artificial Intelligence Group.

Pitts and his fellow MIT researcher Warren McCulloch  developed the first (very basic) artificial neural network, which might be how the G.I. Robot could learn and improve its AI in the field. 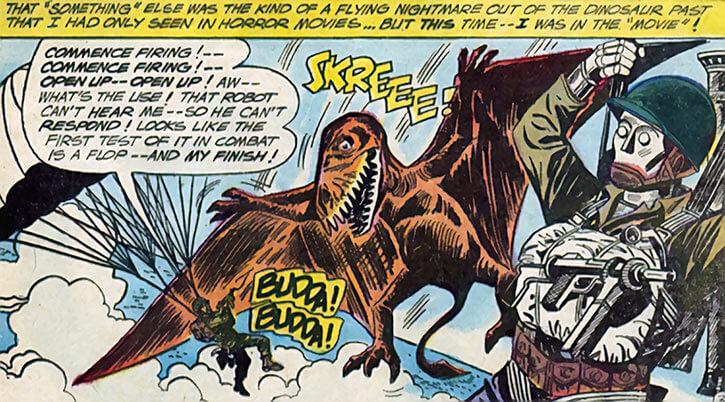 The G.I. Robot also seemed to follow the Three Laws of Robotics  – which had been drafted by Isaac Asimov in 1942.

Asimov’s earliest short stories were definitely known to MIT students and faculty. In subsequent decades, the writer would become closely associated with the Institute through its Science Fiction Society.

(Amusingly Professor Zurin, the DC Comics scientist behind the first G.I. Robot, sports a passing resemblance to Professor Minsky. And the officer with him was apparently a Navy man, the branch of service in which Professor Minsky served during World War Two).

One robot, one Ranger

The “Joe” G.I. Robot was deployed in the field under the supervision of a US Army Ranger called Mac.

A later text implies that Mac was also a Suicide Squad member — see our Suicide Squadron general article for more about it.

The first mission of Mac and “Joe” was a simple reconnaissance on a desert island in the South Pacific. But a violent gust of wind blew the two parachutists off-course. Inevitably, they ended up on Dinosaur Island.

Presumably, the tests were done in the area since Army Rangers details around Dinosaur Island automatically received the “Mission X” secret classification.

“Joe” fought off the inevitable pterosaur attack, and proved invaluable in repelling dinosaur attacks on the ground.

Mac and “Joe” left Dinosaur Island in one piece, and the initially very sceptical Ranger made an enthusiastic report about the G.I. Robot.

In particular, the android had spontaneously saved Mac’s life on the Island. The Ranger came to openly consider the android to be his combat buddy, and talked to it like he would to a human.

After this successful mission, the G.I. Robot was thoroughly checked and overhauled by the scientists.

Based on the Ranger’s report, the researchers equipped the android with a photosensitive chest board. That way, if vocally giving orders to the robot was impossible, Mac could shine a flashlight at the android’s chest to activate some basic routines.

They also gave some experimental weapons to Mac and his “buddy” for testing.

Diode with your boots on

The next deployment also went bad.

Mac and “Joe” were sent along a Rangers patrol to reinforce conventional troops. But while crossing Mission X territory the plane was snatched by a giant fish.

The other Rangers managed to evacuate. But Mac and the robot were grabbed by a gigantic eel. The monster took them to its lair under Dinosaur Island.

The inevitable mammoth cavern was not just crawling with dinosaurs. Mac and “Joe” also discovered an immense Imperial Japanese robot. The mechaSome form of cool sci-fi super-vehicle or super-robot had gone rogue, murdering its creators then killing random dinosaurs. Even the prehistoric beasts were dwarfed by the robot.

The Imperial robot was repelled during an underwater struggle when Mac used a flashlight to direct the G.I. Robot’s gunfire at a vulnerable control panel. Eventually, the Ranger and the android managed to exfiltrate the Island.

Mac and “Joe” were never seen again. It seems likely that they met their end while on a mission.

The account is ambiguous, but it seems likely that Mac and “Joe” are the two troopers referred to in a later story as having gone MIA.

The next generation of G.I. Robot was nicknamed “Mac”. It was presumably to honour the memory of the Ranger who field-tested the very first G.I. Robot.

(In the real world, a major DARPA/MIT research program into computing that started years later was also called “Mac”. Perhaps its DCU equivalent was also a salute to Mac the US Army Ranger).

More sinisterly, it is possible that Mac died but his brain patterns were used to program the responsometer of the “Mac” robot. Since in one version of Metal Men continuity, responsometers are based on cerebral engrams of deceased humans.

Another robot was tested between the “Joe” prototype(s) and the “Mac” prototype(s). But it clearly was of a different design.

This device was a robo-tanker, programmed to operate a specially-modified M4 Sherman  or M26 Pershing tank  . The test run was accompanied by two elite human tankers.

It wasn’t conclusive. The robot was a good driver but couldn’t deal with unusual situations. The humans narrowly survived the mission, but couldn’t take the robot — which they nicknamed “Nuts and Bolts” — with them as they were chased by an irate brontosaurus.

If you ask me, this failed experiment was probably a Harvard  project. 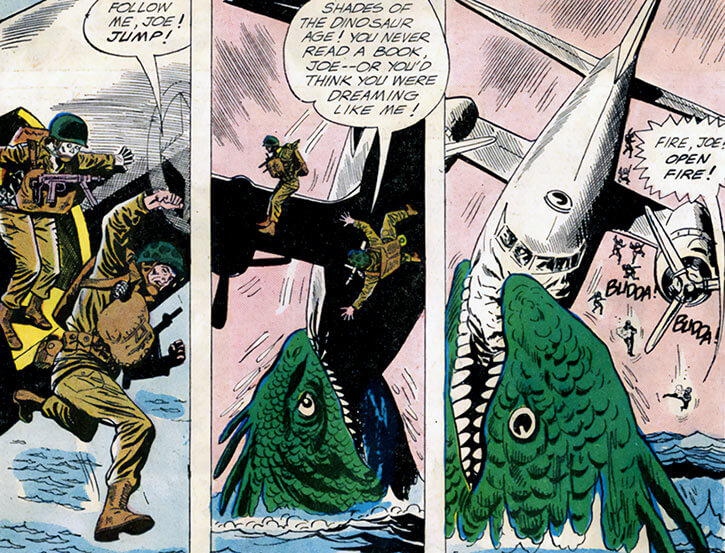 The “Joe” prototype looked different from later, better-known G.I. Robot prototypes – its face was featureless except for a pair of eyes.

It had a very stiff body language. For instance its torso couldn’t bend in any way, and the robot stood ramrod-straight unless there was a specific need to adopt another posture.

“Joe” once attempted to communicate by lighting its eyes on and off. Given enough time it could have been programmed to “blink” in Morse.

The G.I. Robot is silent and normally has no initiative. It is a perfectly obedient, tireless soldier.

However, during its very first mission, it spontaneously placed itself in danger to save the life of its human handler. By the second mission, “Joe” repeated this behaviour at least three times.

It was clearly dedicated to protecting human life, and would even ignore human orders if necessary to save friendly lives. For instance it once kept shooting after having been ordered to cease fire. Since its handler was about to be killed by an enemy he hadn’t seen.

It is likely that the G.I. Robot was equipped with the earliest version of a “nuclear-powered miscroscopic activator” — later called “responsometers” — perfected by Dr. Will Magnus in 1962. It certainly was an effective learner.

For instance, after multiple exposures, it deduced what it was supposed to do when presented with a hand to shake. 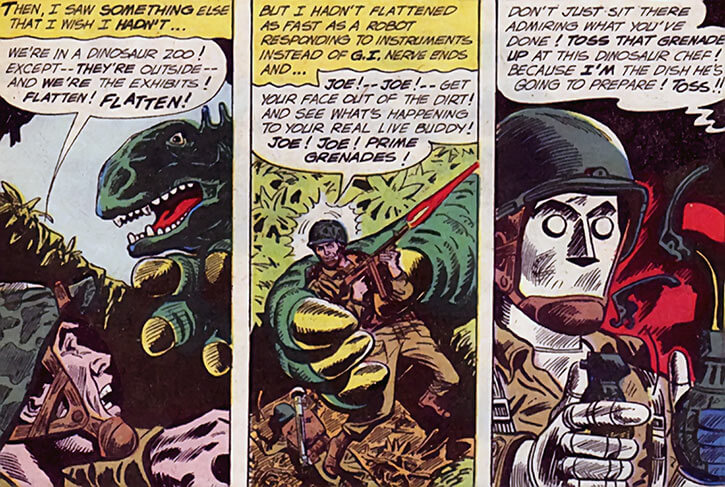 In the Marvel Universe, the G.I. Robot would probably be a creation of Howard Stark.

This early work with responsometers would have led to the later, much more powerful Arsenal robot and the Mistress AI. Which would in turn be step stone toward a Marvel Universe version of the Metal Men.

Density increase is Always On and Already Factored In (including in the movement speeds).

Source of Character: DC Universe (reprinted in the War That Time Forgot TPB).