“Screaming down from the stratosphere. Fantastic flying monster… 17 million years old… bigger than a battleship… faster than a jet plane… making war on all mankind… PANIC from Broadway to Bombay ! Atom Age science helpless against Ice Age killer !”

1957 monster movie The Giant Claw has been called a “guilty pleasure”, and mocked for the quality of its special effects.

The bird in particular is badly made, being a marionette puppet with a strange face. The film is also riddled with stock footage making continuity an issue.

The lead actor, Jeff Morrow, confessed in an interview that no one who had worked on the film knew what the giant bird creature actually looked like until the premiere.

He watched the film in its entirety for the first time in his hometown. Hearing the audience laugh each time the monster appeared on-screen caused him to slip out early, embarrassed anyone might recognize him.

“It’s like hitting a battleship with a slingshot ! It’s going after another plane, look out !”

The bird has flown through space to reach Earth over millions of light-years. The bird has been alive for 17 million years.

The Giant claw is surrounded by a nigh-impenetrable force field. It also affords the beast invisibility to detection by even the best radar on the planet. The bird can chase down and overtake jet fighters. It has bested a legion of fighter-jets. 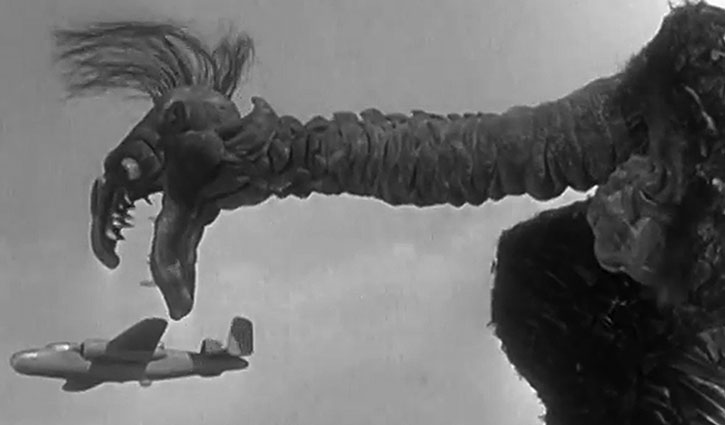 This beast is a visual hunter attacking any movement. It can zero in on an ejected pilot parachuting down, intercept, and snatch him in mid-flight.

The Giant Claw is immense and can easily rip a sky-scraper to shreds.

A radar test pilot, Mitch Macafee, spots a UFO (unidentified flying object). Most everyone is suspicious and doesn’t believe him.

They were still skeptical when a fighter jet goes missing. Officials are forced to take Macafee’s tale seriously when other planes and boats are attacked. 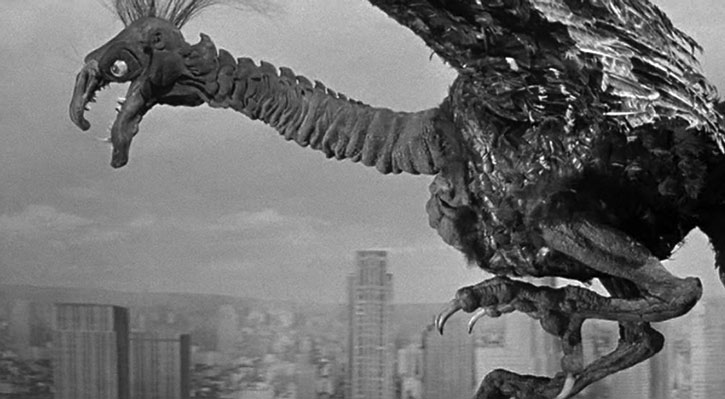 A gargantuan bird was spotted again. Macafee and others figure out, based on the attacks, the bird was flying in ever increasing circles from what would be believed to be its point of origin.

It was also surmised the bird had come from outer space and had travelled millions of light-years to get to Earth.

The Bird began a reign of terror. Citizens were told to stay indoors unless absolutely necessary. A squadron of fighter-jets descended on the bird and one by one were eliminated. It was then the military began to talk of using the A-bomb on the beast. 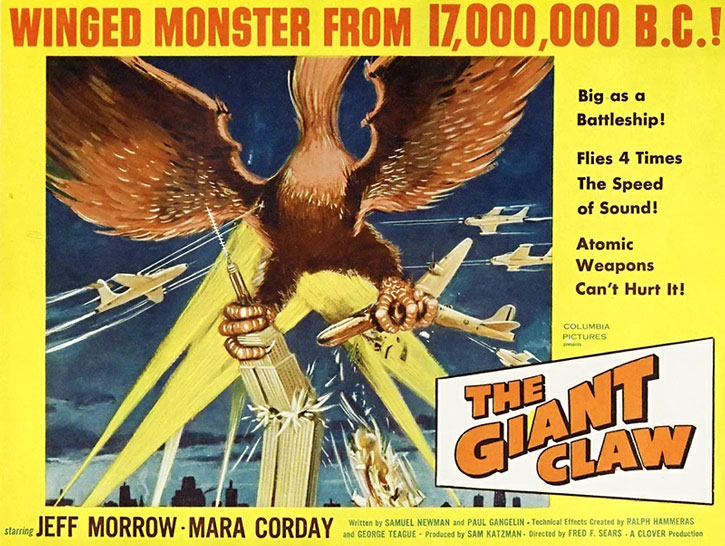 Remembering the attack on a Canadian’s farm MacAfee, along with the mathematician Sally Caldwell, searched that area for the bird’s nest. Their hunch was correct.

Finding the nest they were able to destroy the egg from a distance. The Bird was outraged. Its next attack was on New York City where it attacked the United Nations building and the Empire State Building.

Macafee and his team discovered a way to weaponize mu-mesonic atoms which they believed would disrupt the bird’s force field. Using this they were able to bring down the bird’s field at great risk.

This allowed the fighter’s missiles to hit and kill the bird. It crashed down in the ocean.

“No corner of the Earth was sparred the terror of looking up into God’s blue sky and seeing, not peace and security but the feathered nightmare on wings.”

A gigantic grotesque vulture-like bird. It has a long sprout of hair from the top of its head and a maw full of crocodile-like teeth.

A French Canadian farmer mistakes the bird for La Carcagne which is alleged to be a monster of folklore that resembles a giant woman with a wolf’s head with bat-like wings and which, like the Banshee, is a harbinger of death.

Purely a beast. This bird flies through space looking for a suitable place to setup a nest and lay its eggs. It doesn’t need to eat so it attacks other life forms only to secure safety for its young.

It was certainly distraught by the loss of its egg. 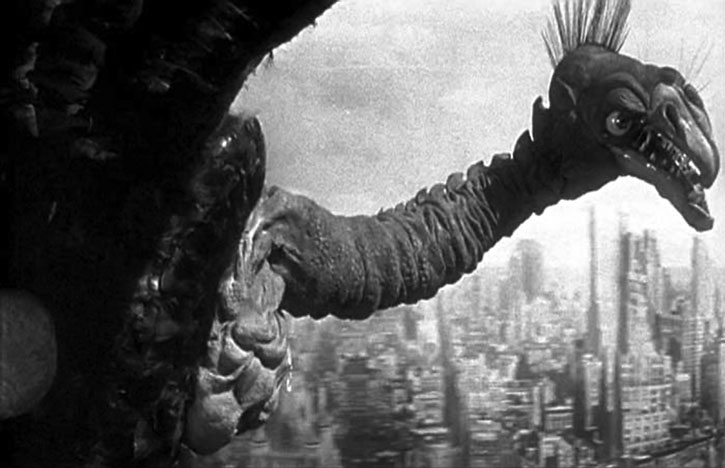 The Giant Claw probably isn’t a global menace but it could make for a powerful creature of the week. 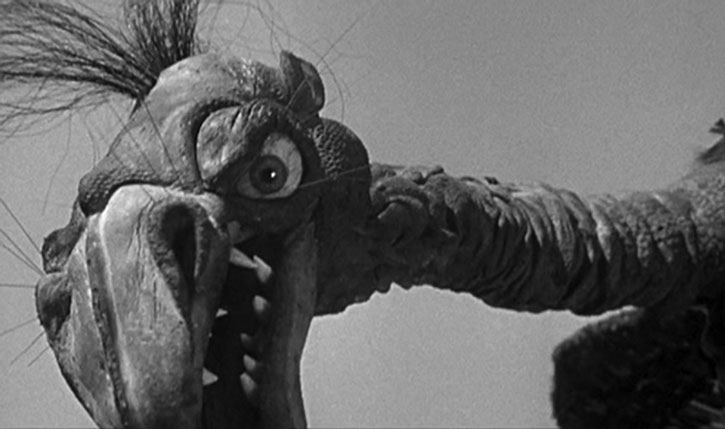 Gen. Buskirk: “It doesn’t make sense. It’s just a bird. A big bird. Guns, cannons, rockets ! It’s just a bird !”
Lt. General Considine: “Sure just a bird. Ten million dollars worth of radar can’t track it. Enough firepower to wipe out a regiment can’t even slow it down, sure, just a bird.”

Drawbacks:
Power Loss: The Giant Claw loses the use of Force Field if it or its Force field comes in contact with (mu-mesonic atoms); Strange Appearance.

Source of Character: The 1957 movie The Giant Claw. 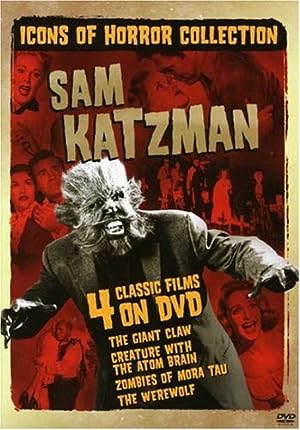 Icons of Horror Collection: Sam Katzman (The Giant Claw / Creature with the Atom Brain / Zombies of Mora Tau / The Werewolf) 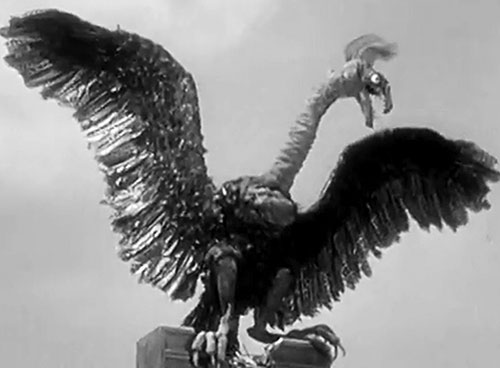 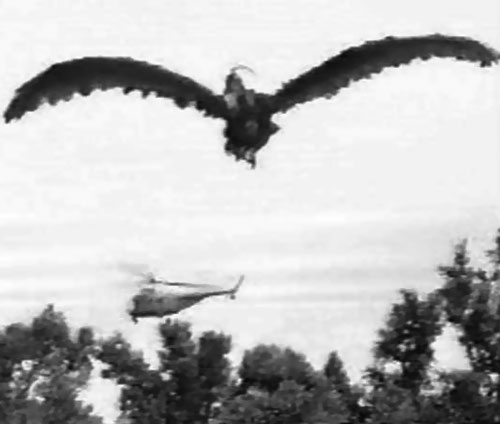 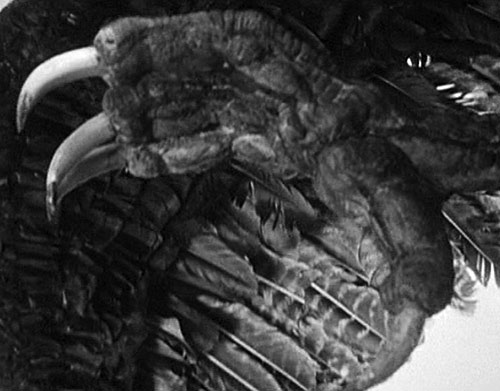