He’s not the subtlest symbol of American corporate corruption ever written in a comic book, but he sort of works.

There *is* one subtle bit, though. His last name may be a Miracleman reference, hinting at Giant’s nature as a badly failed Captain Marvel (Billy Batson).

Giant has been genetically altered to be near-invulnerable and super-strong.

He can also alter his gravitonic field to fly, or focus optical bio-energy. Said eyebeams are powerful enough to vaporise humans.

He is also supposed to have enhanced senses. But has only conclusively demonstrated the ability to exactly locate a man talking from behind a thick wall.

Moran was part of Henry Bendix’s black projects in superhuman enhancement, in much the same way as Apollo and the Midnighter. His powers may stem from the same process as Apollo’s.

By age 16 or 17, Moran became a “super-hero” in the New York area under the name Giant. He was a brutal, incompetent glory hound who would kill his opponents at the drop of a hat. He killed at least 10 suspects during that time.

When the UN building was attacked by super-powered terrorists, he swooped in. But the UN’s elite commandos had already eliminated half the attackers.

Furious he was being ignored, Giant acted in his usual reckless, callous and irresponsible manner. He killed a terrorist which had already been neutralized by Lieutenant Hämäläinen. He also destroyed several wooden pillars – the resultant wooden shrapnel seriously wounding many of the hostages.

As Giant was getting offended that his contribution was not appreciated, Santini bluffed. He used scrapes of knowledge from recently cracked Bendix files to make Giant believe he could detonate his skull at the touch of a button. Santini then dismissed the immature cretin, who destroyed yet another floor by flying through it on his way out.

Giant then went on to be hired by Hallibusker, a powerful US corporation with very close ties with the US administration. He was renamed Hallibastard, and changed his costume to a NASCAR-style jump suit full of corporate logos.

When the Authority took over the United States of America, Homeland security director Ivana Baiul escaped the purges. She had Hallibusker send Hallibastard in to be her bodyguard.

Santini’s team evacuated, leaving Giant to be subdued by the Authority who ’ported in seconds later. They were attempting to take Santini down.

Hallibastard was with Baiul when she met Santini in the Vatican. At one point Giant moved in, looking like he was about to manhandle Santini. He hadn’t understood the strict ban on violence in the Holy See. Santini’s contact, Cardinal Torquemada, himself a powerful SPB , made it instantly clear to the Hallibastard that he should behave or be beheaded.

In his Hallibastard suit, he occasionally wears a helmet.

An immature, reckless, self-centred, irresponsible shallow cretin. All that matters to him in the world is his own rapid gratification, large ego and material comfort.

He thinks he’s entitled to whatever he wants, and has trouble understanding moral rules. Such as not murdering people, not starting brawls in churches, not wantonly destroying property, etc. Basically, he’s an example of everything you dislike in “the youths of today, mumble mumble”.

He’s a casual killer. He kills for no clear tactical reason, and will even vaporize random people if they insist on giving him lip. He’s very, very confident in his invulnerability and does not care about the comparative fragility of human beings around him.

However, if somebody seems stronger than he is (such as Torquemada), all his confidence suddenly evaporates.

His shallow personality and “I wanna be a star cuz I’m da baddest, yeah !” dialogue leave him with very low AUR and INF. Professional, serious operatives and players always ignore him like some annoying, whining kid. Worse his incompetence is beginning to tire the easily annoyed Baiul.

What makes Giant so incredibly annoying is the contrast between his perfect abilities and great power – and his irresponsible moronitude. If your players want to hit him whenever he opens his mouth, but can’t and need his raw power anyway, you’ve done an excellent job.

“Yeah, like that’s going to hurt me” (Lets Coleman, thrown by a villain, collide with his chest and nearly break several bones without lifting a finger). ”Yeah, that worked out real well for ya. Got anyone else you want to throw at me ?”

Santini: “And kill how many kids trying to get (the reborn Citizen Soldier) ? That’s been tried before, Giant, by a guy named Herod.”
Giant: “Huh? Ain’t no Herod works for the Civil Defense Administration, man.”
Santini: “Herod tried to kill Jes… oh, forget it.”

Giant’s power level is unclear. So a lot of guesswork went into his game stats. 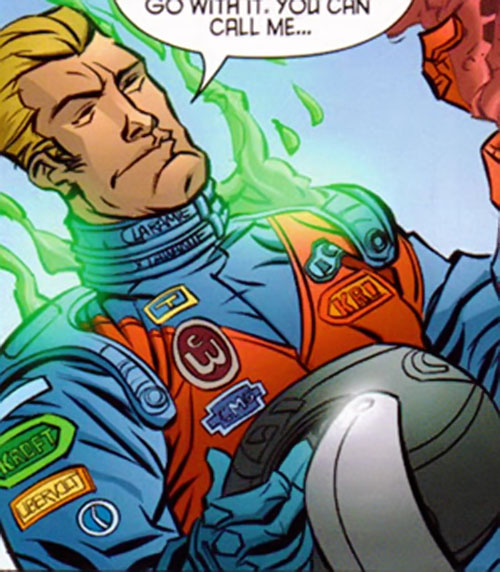