The Giant One clashed with Spider-Man but once, in 1972.

He was part of an unusual story arc. Through Flash Thompson, the Việt Nam invasion became a recurrent part of the stories. Whereas super-hero comics often avoided the subject as too controversial.

He’s an obscure character. But we have a fondness for giant enforcer types. So we write ’em up when we come across ’em.

The Giant One is, well, gigantic.

Furthermore, he seems to possess consequent superhuman strength and durability.

Strength-wise he appears to be somewhere between “peak human” and Spider-Man (Peter Parker). And he can ignore even blows delivered with low superhuman strength.

The Giant One didn’t seem to trigger Spider-Man’s spider-sense. Since Spider-Man didn’t even mention anything unusual, it might have simply been a writing mistake.

But one can certainly justify the Giant One escaping paranormal detection based on this murky precedent. Our game stats use this approach. 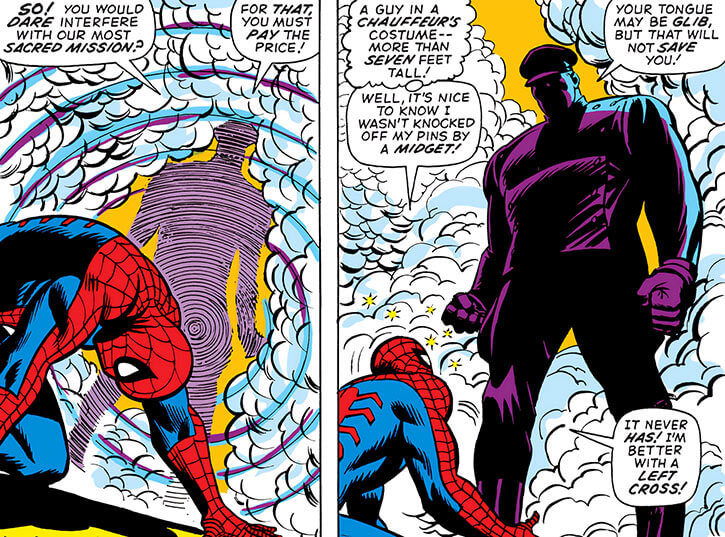 The Giant One seems to be the most efficient servant in matters physical for the Hidden Temple. Which is an isolated Vietnamese holy site and monastery.

The Temple was mostly unknown until Flash Thompson stumbled upon it during his tour of duty in Việt Nam. The American found the place pleasant and peaceful, but eventually returned to the US lines.

There, he learned that the Temple’s area was about to be bombed. Unable to convince his commander to abort the barrage he went back to the Temple. Flash’s goal was to warn everybody to evacuate.

The high priest refused to move. He was seemingly killed when the Temple was shelled. He had, however, actually gone into a trance.

The remaining monks misunderstood this. They thought Flash had deliberately had the Temple razed. They also guessed that the High priest would only awaken if they killed Flash. 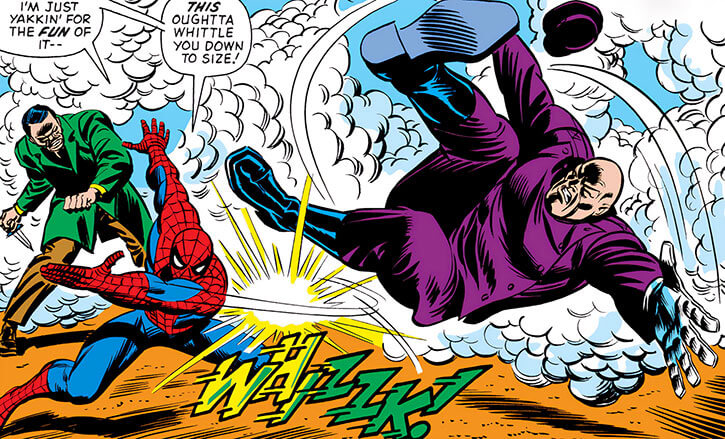 These monks, including the convert known as the Giant One, moved to the US and found allies there. Their efforts alerted military intelligence, who put Flash under their protection.

The monks and their allies clashed with the Feds several times in their attempts to kidnap Flash. This attracted the attention of Spider-Man. Soon, the Giant One and Spider-Man tangled.

The Giant One and his allies trapped the Federal limousine carrying Flash, using trucks and cars. They then attacked using smoke and tear gas. Spider-Man managed to sweep the Giant One off his feet by surprise and web him up.

However, the Giant One and the other monks escaped. They later infiltrated a Federal building, setting a diversionary bomb. This time the Giant One managed to stun Spider-Man, and they finally abducted Flash.

Spider-Man met with Doctor Strange. They both teleported to the Temple so Strange could awaken the High Priest from his trance.

As Strange did so, Spider-Man prevented the Giant One from ritually executing Flash.

This time Spidey was ready for the man’s might and reach. He handily defeated him by using his webbing and his full strength.

The Giant One was seen clad in a chauffeur outfit.

Apparently he’s very religious, and totally loyal to the Temple.

He seems experienced in the ways of violence — presumably from his life before he became a convert.

He’s quite articulate, perhaps even somewhat melodramatic, and very aware of his size, rep and strength.

He seems fairly smart and competent. The Giant One is not a dumb thug by any means. 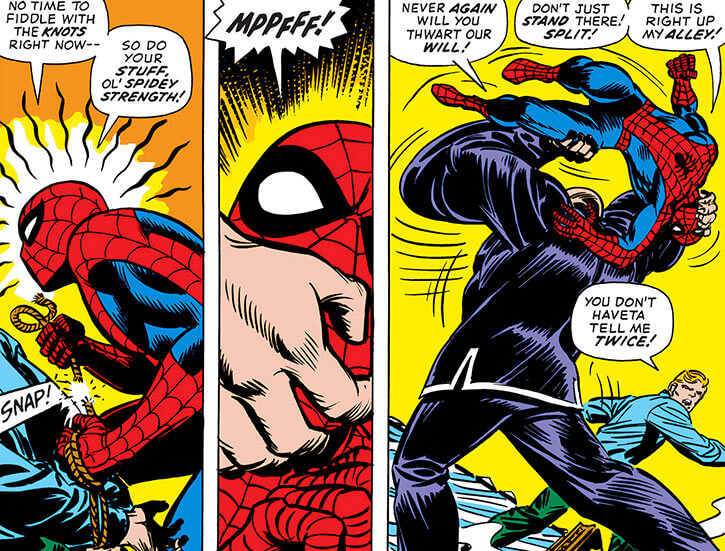 “One single blow cannot down me ! In all Indo-China, none can match the power of the Giant One !”

“I know not why you seek to battle me ! But I fight in the name of the Hidden Temple – and so, I cannot lose !”

In the DC universe the Temple would be one of the places where Bruce Wayne studied the martial arts.

When the Temple is attacked by Westerners leaving the abbot catatonic due to his wounds, the leadership is taken up by a monk who was a rival of Wayne’s during his time at the Temple.

He immediately declares that only the outsider Wayne could be responsible for the attack. He then sends The Giant One to either bring Bruce back to face justice or kill him outright.

Power behind the giant

After an inconclusive battle or two and even a loss to The Giant One, Batman manages to outwit the monk and capture him, thus learning of the attack on the temple.

Eventually the Dark Knight traces the attack to a business rival of Bruce Wayne’s who is essentially the current Lex Luthor with the numbers filed off (or Justin Hammer).

The criminalistic businessman had investigated Bruce Wayne’s history. And found the connection to the Temple.

Deciding that one of the monks was an ideal weapon against a troublesome competitor, a deal was made. In exchange for an attack that would provide cover for an assassination attempt upon the order’s abbot, Bruce Wayne would be eliminated.

The Giant One could also be a former League of Assassins killer.

He retired to join a peaceful monastery but still occasionally gets into trouble due to his past. 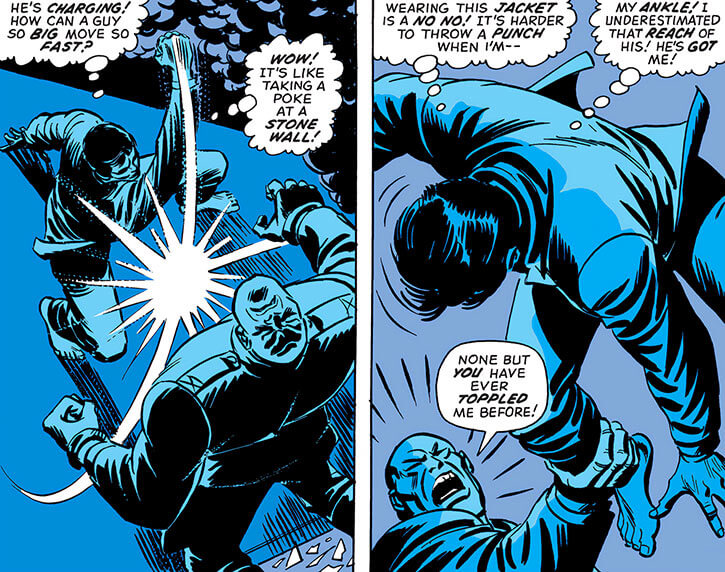 SIA toward serving the Temple.

The BODY score is based on his demonstrated endurance against punches. I wouldn’t be surprised if he were more vulnerable toward Piercing, Slashing, Ballistic, Fire and such Descriptors, but there isn’t any material about that.

Stillness of Mind • 2 points • Descriptor: Mental, Mysticism (?)
Hard to Detect with Spider-Sense and Possibly Other Things — Concealment 2 (all Mental; Passive).