This profile is the continuation of the first Gil Jourdan character profile, and should be read after it. Having it all on a single page was unwieldy.

This profile covers the basics about Gil’s companions. It then discusses Gil’s adventures collected in the third volume of the 1980s reedition (Aventures Exotiques).

Butterfly (André Papignolles) isn’t particularly smart, courageous or resourceful. But he’s one of the very best safecrackers in France. And has extensive experience with heists and evading the police.

He’s also an adept pickpocket, and when necessary he is more nimble than he looks.

Furthermore he has underworld contacts, which can be quite useful for the Jourdan Agency.

Butterfly is a wisenheimerA smug know-it-all., with a love of bons mots  . He constantly indulges in inept puns. Then erupts in a startlingly loud, braying laugh as everybody else rolls their eyes.

He also tends to go a bit long on booze, and has a lazy streak.

Evolutions during this era

Early on, Butterfly is unreliable, dishonest and a casual pickpocket. Jourdan even has to use his fists to keep Butterfly in line. But this completely changes after Papignolles decides to save Jourdan’s life.

At this point he becomes a good buddy, a loyal employee, and markedly more courageous.

As the series progresses, Butterfly becomes more of a faithful helper type, and less of a B&E expert. He’s something of an audience stand-in, and the guy Gil can talk to (for instance, to explain his cunning plans). Plus of course the comic relief. 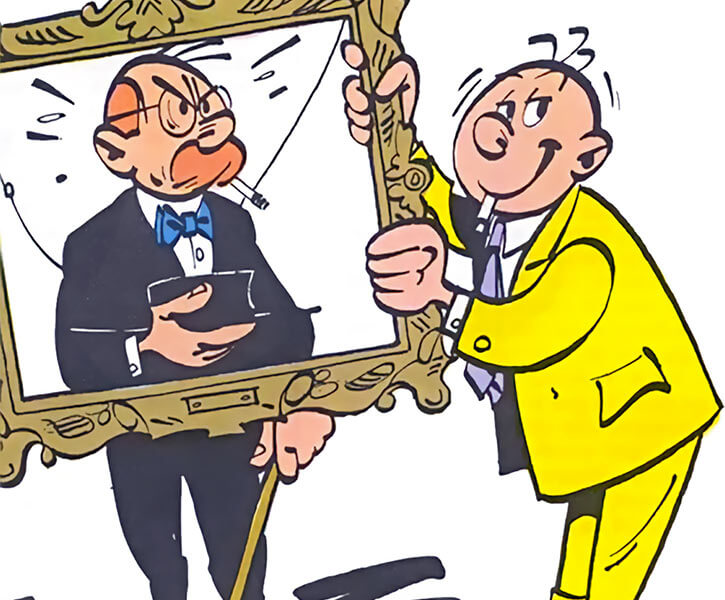 Flyspeck is tiny and very young. It’s not rare for people to think she’s 14 or so, and manhandling her is trivial. But she’s resourceful and intelligent, and has good people skills.

Flyspeck has a gift for linguistics. When Gil introduces her by saying that she’s fluent in nine languages (!), it sounds like a joke. But then Flyspeck easily holds a discussion in Modern Greek, so it prolly ain’t.

She can type. Back then, it still was a specialised skill and having somebody to type for you was a status symbol. She’s probably self-taught, given her age.

She’s a pragmatic, resourceful, school-of-hard-knocks, opinionated blue collar type. But she likes her boss, and she’s excited to have a chance to demonstrate her intelligence by helping with cases.

Evolutions during this era

As the series continues, Flyspeck works to look less tomboyish and more feminine. In-universe, this is presumably to look like a professional assistant when working at the Agence Jourdan. She even gets used to wearing skirts (gasp !) and having longer hair.

Flyspeck is an important helper early on. But this soon recedes, with Flyspeck just being the secretary. She still does a bit of legwork, but entirely off-panel.

Crouton is incompetent. He occasionally gets results, but this is done by stodgingly verifying every lead and getting lucky. “Check the guests list at every hotel in town” is a typical Crouton approach.

However, he can also have bursts of competence when the story requires it.

He also has the prerogatives of a police detective. This is a precious resource for the Jourdan agency. It avoids a lot of trouble with the law. It also helps with summoning manpower to arrest the criminals du jour.

Crouton may also carry a Browning M1910, but doesn’t have it for his everyday work. If there’s a genuine risk he’ll likely hand his Browning to Jourdan, who’s clearly a better shot.

Crouton is, in a way, protected. The Police Chief in Paris finds his incompetence amusing, and keeps Crouton on the force so things don’t get too monotonous. This recedes as associating with Jourdan results in career-making arrests for Crouton.

However, Crouton also becomes more of a co-sidekick and co-comic relief as the stories progress. His status as police becomes… hazier.

Crouton is readily comparable to inept Tintin detectives Thomson & Thompson (originally Dupont and Dupond). All three are from a time and place where serious men were expected to have those clothes and a moustache.

No contest, given the material below.

The Wages Of Fear is a classic French/Italian 1953 thriller, and a cinema masterpiece. This movie’s story is about driving two trucks loaded with jerry cans of nitro, who could explode at any moment, across 300 miles of bad terrain. It’s not cheerful.

https://www.youtube.com/watch?v=NlBywBxiUMc
The movie is available for download on Amazon.

The 1985-87 collection I’m using doesn’t republish the Gil Jourdan GNs in their chronological order. This is slightly disconcerting – but it makes good sense, and works well for character profiles.

In other words – Jourdan has a different TTRPG character sheet for these stories.

Where these specific, mission-critical skills come from is never explained.

However, let’s assume that Gil is French (there was no Schengen  yet). If so, he likely completed his military service – it was still mandatory, and he’s neither rich nor sick.

Since Jourdan is 21 and has a Bachelor of Laws, his biography has to have something atypical in it. For instance he has to have obtained all four certificates for his degree in two years, which wasn’t common. Especially since during his youth conscription lasted for 18 months.

My No-Prize HypothesisA made-up explanation to plug a plot hole. would be that Jourdan did his military service in 1952, and volunteered to serve in Indochina  . This wasn’t common either, but a few thousand conscripts did so.

In this hypothesis, he wasn’t assigned to the front lines (not that this was a war with clear frontlines), but instead to logistics to free up career soldiers.

Gil could thus have spent up to nine months driving military trucks over terrible terrain and roads, with mechanical problems and guerilla harassment.

There could even have been strange circumstances where he served as a stopgap copilot on one of the French Army’s Douglas C-47 Skytrain  (a military DC-3, essentially) for a month or two.

This No-Prize Hypothesis exactly matches the skills Gil demonstrates in the third volume of the collection. And heh, perhaps a multilingual Vietnamese friend taught Gil some Chinese.

This volume has four stories, which were originally published during the entire span of the 1960s.

A French engineer has been kidnapped by the potentate of Massacara, a tiny fictional country between Brazil and French Guiana. But it is clear that he will never agree to provide his invention, an ultrasonic rifle, to the dictator.

The Jourdan Agency is hired by the engineer’s brother to rescue him.

Once in Massacara Gil and Butterfly are soon arrested, given a show trial and sent to the inhumane desert prison camp of Xik-Xik. However, they soon realise that the engineer is also held there.

Gil sets up a daring escape from the camp. This soon becomes a race through a harsh, treacherous desert (including the many wonders of fech-fech  ) in an old M35 truck  .

But the party narrowly makes it to French Guiana, the last stretch being done in pirogue  after trading with rainforest natives.

The material is reflected in the stats below, though. 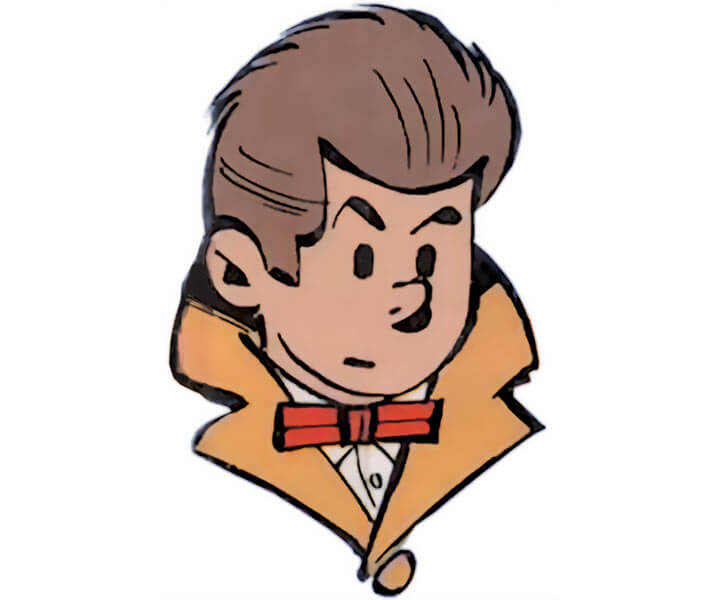 The sultan of scooters

A mainland Chinese entrepreneur hires the Jourdan Agency. He has a monopoly on importing motor scooters in the PRC, and is therefore nicknamed the “sultan of scooters”.

But a contraband ring is eating into his huge profits. The “sultan” wants the smuggling entry point located.

Jourdan, Butterfly and Crouton reach what seems to be Southwestern China. But the never-ending, torrential rain is expected to last for a month or two, grounding all airplanes.

Furthermore, the smugglers know that Jourdan is coming. Chinese-American mercenaries come after our heroes. But they too are hindered by the bad terrain and awful visibility. This allows our heroes to survive their attacks.

The detectives manage to sneak into the smuggling airfield by night. They then have little choice but to steal a DC3 transport airplane full of contraband scooter parts. But miraculously, the rain finally ceases shortly after take-off.

This is a short text story about General Porfirio Díaz  , of Mexico.

In the real world, after the 1910 revolution  , Díaz found refuge in Paris. But in the Gil Jourdan world, he and a thousand soldiers tried to make it to Guatemala instead… and inexplicably vanished.

Hired by a professor of American History, Jourdan, Butterfly and Crouton investigate in Southern Mexico. They manage to find the path Díaz’s army took, as proven by decades-old remains.

As they follow the trail in the jungle, Butterfly is bitten by talajesTicks. and becomes severely sick. Gil saves him using antibiotics and a strict procedure to treat the blisters.

The mystery is thus solved. The fleeing army slept on ground infested by a rare species of talajes. They didn’t have the medical supplies and knowledge to treat the bites, which have anaesthetic effects and can easily result in fatal septicemia  .

Jourdan even finds the remains of a uniform that likely was General Díaz’s.

Regeneration is Form Function, and can only be used to lessen recovery times and healing rolls frequency.

Accuracy is never used for combat (which is why it’s not a Weaponry Skill). But it has been used as a Force Manoeuvre for Intimidation purposes.

Nothing on the regular, though he’ll often grab a weapon his enemies dropped. A Thompson M1 submachinegun would be typical of the day, and he’s once seen with what may have been a Swedish K.

In one adventure he does pack a subcompact .22LR pistol that resembles some older High Standard models. It is concealed as an ankle gun, using elastic bands. [BODY 02, Projectile weapons: 03, Ammo: 05, Miniaturisation: 01, R#04].

While in the Southern Mexican jungle, Gil had a Garand .30 carbine (and Butterfly had what seemed to be a full-sized M1 Garand).

I laugh at your puny linguistics, Earthling

These stories have Genre rules about the Language Advantage :

“You call this a lock ? I could open it just by waving hello !”

(Deep in Chinese wilderness) Gil: “Bridge ahead. That one certainly seems stouter.”
Butterfly: “Yes, I wonder Kwai  . MAWAHAHAHAHAAHAHAHAHAAH !”
(Believe it or not, that’s clearly one of his *best* ones.)

B&E small tools, a pack of cigarettes, and a good hat he’s attached to. 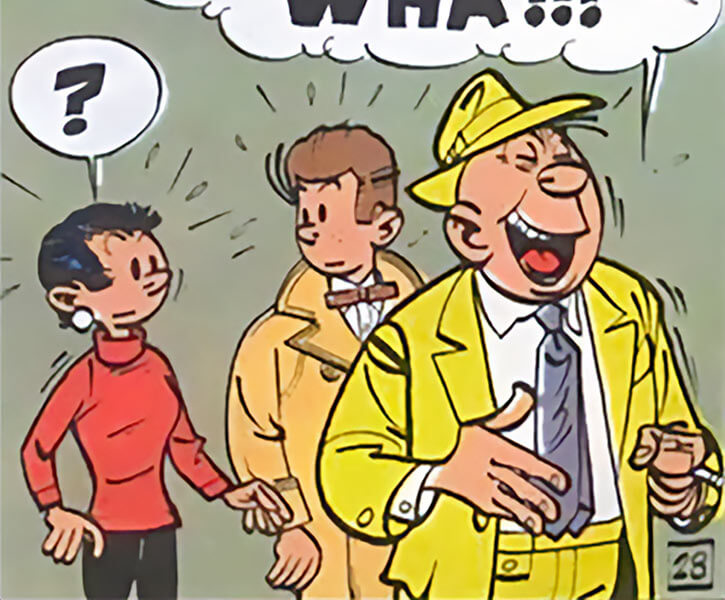 “Gil, getting into this castle is a pipe dream. You’d have better odds of finding a flea on a crocodile.”

Shrinking is Always On and Already Factored In. Which is what brings her STR to 00 — so she has 0 APs, rather than an absence of APs, in STR. 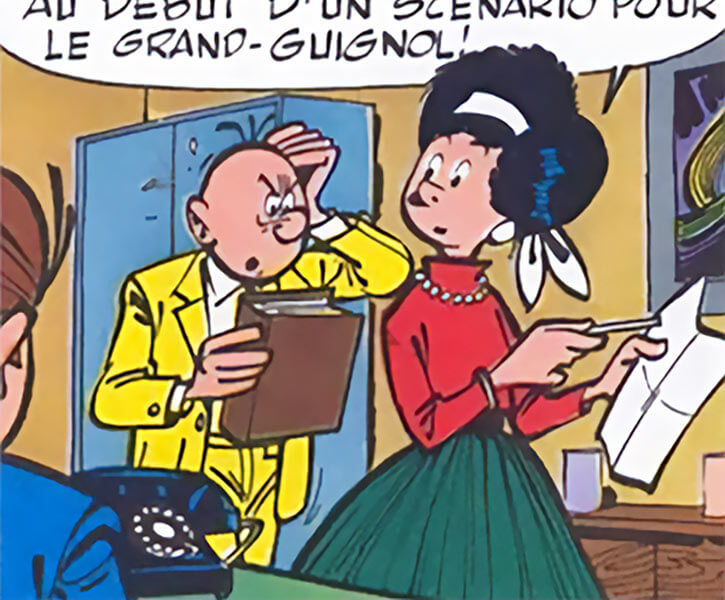 Flyspeck with girl mode on.

Chief: “Crouton ! Do you speak Italian ?”
Crouton: “I don’t know, Chief.”
Chief: “You either know the language, or you don’t !”
Crouton: “How would I know, Chief ? I never tried talking in Italian !”

SIA toward Clumsiness, MPR (Near-sighted), Misc.: Crouton’s attempts at stealth cannot have an AV/EV above zero, as he’ll almost always stumble into something.