Gimmix is a minor character in the 2005 Seven Soldiers epic series by Grant Morrison. But as a Pemberton, she has ties to well-established — if somewhat obscure — corners of the DC Universe.

As with the rest of our Seven Soldiers, each profile doesn’t explain every single thing. But by following the links about Seven Soldiers characters, you can gain a sense about the plot. Which, however, is a S P O I L E R for a fabulous work.

As a character, Gimmix worked oddly well. It would be neat to have some of her gadgetry work show up in a game.

Gimmix was a competent gadgeteer . She had a broad range of useful gadgets intended for a limited number of uses. In the DC Heroes RPG, these are textbook Omni-Gadgets.

Her equipment had a “women’s accessories” theme. Here are examples :

Jacqueline Pemberton is the daughter of Merry, the “girl of a thousand gimmicks”. Merry was a WWII-era super-heroine and frequent associate of the patriotic pals, the Star-Spangled Kid and Stripesy. Jacqueline seems to be in her early 40s, though giving her an age is difficult given her use of surgery and cosmetics.

A likely hypothesis is that she is the older sister of Brainwave (Henry King, Jr.) – formerly a Infinity, Inc. member. Like her probable kid brother she seems estranged from her mother, who is known to strongly object to younger persons risking their lives as super-heroes. Their mother’s militant attitude may have prompted both children to become heroes.

Pemberton apparently had a career as the very minor heroine Gimmick Girl. However, their mother’s fears would prove correct for both Henry and Jacqueline. Gimmick Girl soon ran into a problem she couldn’t handle. She was kidnapped by demonic, shape-shifting monsters and sexually abused. Jacqueline was left psychologically diminished by her ordeal.

She eventually returned to the hero scene as Gimmix. But she now carefully stuck to what she called “light hero work” – cases that didn’t have a potential for going horribly wrong. She had a number of brief, short team-ups with much better-known heroes such as Booster Gold or Aquaman. Yet all these cases were way too minor to ever be chronicled in comic books.

While routine, these cases were important for Gimmix. She turned them into revenue by telling anecdotes about these adventures, talking about the experience of working with B-list heroes… In short, activities catering to super-heroes fans.

Gimmix worked the super-heroes fans convention circuits. She sold stories and autographs and participated to discussion panels staffed by D-listers, has-beens and retired C-list villains. This convention milieu seems broadly similar to video games or comic book conventions in the real world. It is mostly attended by boy nerds wanting to approach the fascinating world of super-heroes.

Gimmix answered a classified by veteran super-hero the Vigilante (Greg Saunders).She hoped to gain useful contacts to make and stories to tell. She was disappointed – the Vigilante only managed to round up a bargain basement crew. Namely the then-current versions of the Whip, Boy Blue, Dyno-Mite Dan and I, Spyder.

Though she knew that she was very low-tier, Gimmix’s insecurities compounded her discomfort and disappointment. She also seemed envious of the much younger, assured and vital Whip (Shelly Gaynor).

The aged Saunders wanted to close accounts with a monster haunting the Miracle Mesa area. It was a monstrous, house-sized spider that somehow reappeared every century. The Vigilante had encountered the arachnid 100 years before during a time-travel adventure, and unsuccessfully hunted it with a posse.

Though he was now too old to hunt the thing by himself, he wanted to win the second round and rid the world of it.

The last day of Summer

Thanks to I, Spyder’s arachnological expertise the rag-tag set of nobodies managed to track down and engage the spider. The experience was unbearable for Jackie, who was deathly scared of monsters due to previous trauma. She was nevertheless the one who stopped the horrible thing in its track, by using a sort of ice spray. Howbeit, she was left shaken. 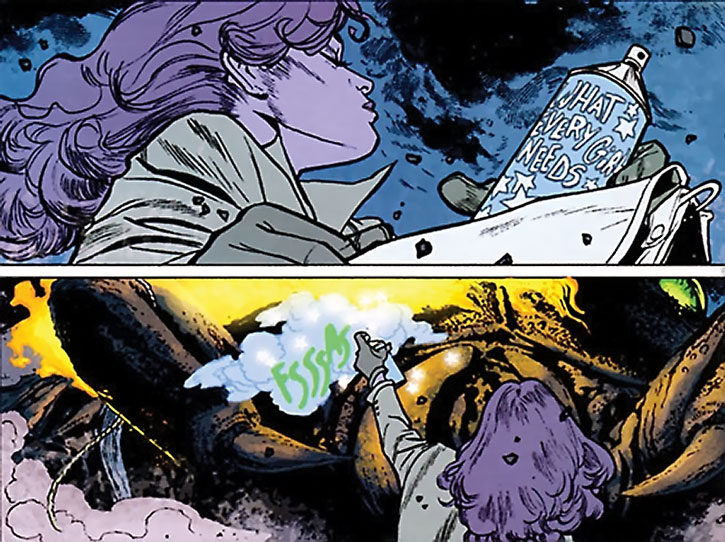 Still, Gimmix had faced and confronted her fears despite her low self-opinion. However, that was her swan song. The spider was bait to destroy the Vigilante’s D-list posse to make sure they would never fulfil a prophecy. It had taken Pemberton, Saunders and the others far enough into Miracle Mesa for them to be ambushed and slaughtered by massed Sheeda forces led by Neh-Buh-Loh.

Though she had disappeared in the middle of nowhere and likely left no corpse, the FBI managed to get enough evidence to establish Jacqueline Pemberton’s death. That took a while, though.

While the situation was still hazy Lexcorp moved in and bought several pieces of intellectual property from the Pemberton estate, such as the Skyman identity.

The luscious red hair is an expensive wig she wears to complete her image as an old-school Hollywood femme fatale à la Rita Hayworth .

Gimmix much prefers to be in character with her wig, classy 1940s clothing, makeup, etc. rather than be plain old Jackie.

Pemberton seemed more competent than she gave herself credit for. After all, she stopped the charge of a multi-tonnes giant spider with a disposable gadget looking like hairspray. She apparently was limited by her psychological baggage, not her skills.

Gimmix seemed insecure and self-loathing. She transparently overcompensated by adopting a superior, arrogant demeanour that annoyed everybody. She dreamed of making it to the big-time and kept talking about it, yet knew she didn’t have the right stuff.

She also overplayed her style and look as a retro super-heroine, patterning herself as a classy Hollywood star from the early 1940s. That included going long on the whiskey and cigarettes to absorb her stress and anxieties. She seemed to view the early 1940s as a sort of golden age . She markedly preferred fashions, manners and style from this era.

She relished opportunities to meet with long-lived heroes from that era, and knew a lot about Golden Age heroes.

Gimmix was morbidly obsessed with the horrible abuse she endured. She never recovered from it. She’d never miss an opportunity to mention she had been sexually abused by monsters, to everybody’s discomfort. She kept recounting the incident in graphic details, either in a never-ending attempt to exorcise it or because she craved solicitude and support.

Gimmix is a consummate name-dropper. Even a very brief encounter with a better-known hero will be ruthlessly leveraged in later conversations so their fame and power can reflect off her.

“Giovanni Zatara. Wonderful man. What a dancer. I know his daughter from my therapy group. JLA girl. Of course, I needed profound counselling after the whole demonic abuse thing I went through.”

“And I want this done professionally, that’s all I’m saying. When me and Booster Gold captured the Hodag at that convention in Chicago, we had proper equipment. Speaking as one who at least has some experience with monsters.”

(Starting to panic) “I don’t care if [the buffalo spider] is wearing Versace, we’re outta here. I do *light* hero work ! Giant fucking spiders are *off* the agenda, boys and girls. I don’t care what I said.”

“The real Boy Blue was a gentleman !”

(In shock after freezing the giant spider solid) “Never, ever again. Is it over and can I smoke now ?”

Drawbacks:
MIA toward Acting like an “a**hole diva” (as the Whip put it), MIA toward Drinking and smoking too much, Public ID, Traumatic Flashback (being at the mercy of monsters), MPI (self-esteem issues). 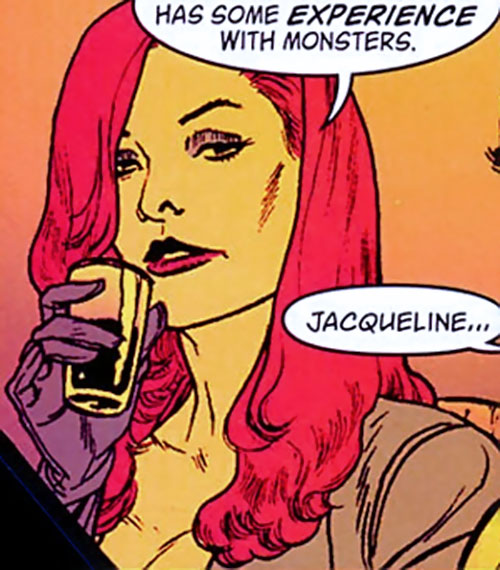 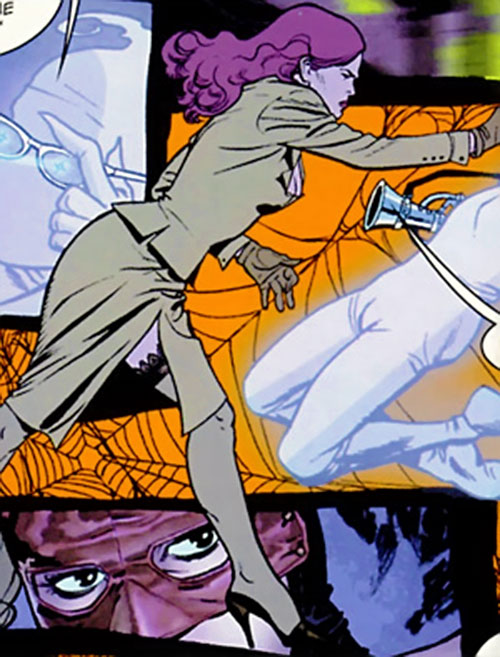