Ginji is a master of kenjutsu (swordsmanship). He’s able to cut bullets in mid-air with his sword and engage multiple men armed with guns.

His speed and precision will seem superhuman to most opponents, demoralising them.

Ginji is a wakagashira (lieutenant) of the Washimine Group Yakuza gang. He used to be an enforcer, but then retired to become a street stall vendor.

When Yuriko Washimine became the boss of the Group he returned to duty as his bodyguard. Ginji first put an end to the enforcer Chaka’s attempted rebellion.

He then eliminated mafiya enforcers, before leaving Japan with Yuriko. This attempt at leaving the past behind did not work, and Ginji was killed by Revy.

Ginji was retired, but his sense of honour and duty — and his personal loyalty toward Yuriko — meant that he had to pick up his word again. Though he’s reluctant to fight, once steel is drawn Ginji is a nigh-unstoppable killer.

He could be inserted anywhere to add a little Japanese flavor to any campaign. Adding Yuriko as well or at least giving him a suitable young charge to look after would seem appropriate as well.

He could easily be an agent opposing the Hand. A connection with Daredevil’s mentor Stick also seems like a nice touch.

“Do you want to see my sword that badly ?”

“If you’re lucky… no, if you’re unlucky, there will be a chance to fight.”

“We’re all the same. No matter how far we go, we’re not normal.”

What idiot would bring a sword to a gunfight ?

Well, Ginji would actually. His overall high stats make him extremely hard to hit in a firefight. That said as per the rules he doesn’t need Reflection/Deflection and could default to the more standard blocking rules with the need for a power. If you play in a more strict interpretation of the rules then he could easily do without it.

The core idea of giving him Reflection/Deflection is to keep with the thematic flavor of the “you ain’t ever gonna hit this guy with bullets” character. Likewise Ginji opperates in the Gritty genre and to keep him impressive in a Mock Real or above genre with superheroes he would need R/D.

Although Ginji has taken a few years off to allow Yukio to live a normal life it is not unreasonable to assume that he may have actually been a lot tougher in his prime to similate this up ALL his stats by 1 and up his HP total to 110. 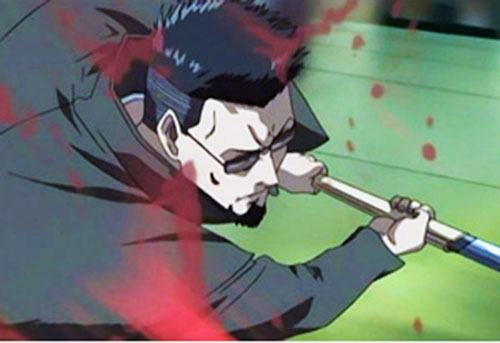