Girder is a Flash enemy – a metallic brick . He chiefly appeared during the Johns years – during the 2000s.

Girder’s body is composed entirely of steel, granting him enormous strength and protection, and he has survived being ripped in half and reattached.

His metallic form has deteriorated to the point where it rusts away when exposed to oxygen. This is unless he is kept in a special environment (such as his cell in Iron Heights) or under the effects of magnetism powers (such as Magenta’s). If not, he will rust to the point where he is unable to move.

During a riot he caused by attacking a co-worker, steelworker Tony Woodward was thrown into a vat of molten steel. It contained scraps from experiments at S.T.A.R. Labs. He survived, but his body had been turned into steel, and he turned to crime.

He was imprisoned at Iron Heights, until he escaped with a number of other prisoners during a viral outbreak at the prison. He was recruited by Blacksmith into her Rogues, and joined them in their takeover of Keystone City. He made advances on fellow Rogue, Magenta, but she had no interest, and when he became too forward, she used her powers to rip him in half.

He survived this and was reattached and returned to prison.

Girder is a thug. He takes pleasure in destroying things and people and isn’t particularly bright. He was attracted to Magenta while they were part of the Blacksmith’s Rogues, and made crude advances to her, but could well feel differently towards her after she ripped him in two.

“I’m not supposed to be here. They told me they’d help. I was just minding my own business. Doing my job… agg… Do you know what it’s like, Flash ? To feel yourself rust away ?” 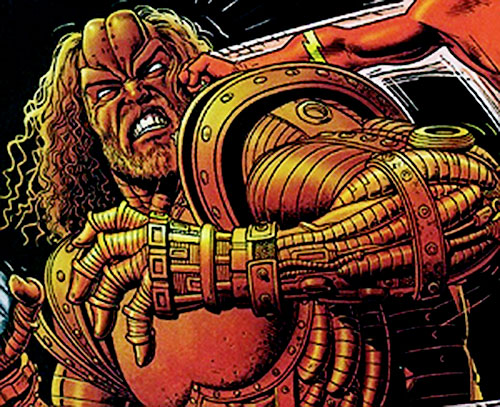