Giuana is an Amazon warrior from Themyscira. As such she has low superhuman strength and reflexes, plus superb combat training, discipline and aggressiveness. Armed with her favourite swords (shaped much like a kukri knife) she can fight even superb hand-to-hand combat experts such as Catman, or dispatch squads or ordinary soldiers.

Giuana’s psychological issues give her a sort of unhesitating aggressiveness, even by Amazon standards. She’s unhindered by self-preservation. In DC Heroes RPG terms, this results in a high Initiative. She attacks startlingly fast and with a commitment that gives pause to the vast majority of opponents.

Feel me, heal me

Her body has been saturated with the unique energy of the Purple Healing Ray. Giuana is known to regrow destroyed body parts quickly – for instance her tongue regrows in less than 24 hours. It’s likely that she cannot be killed through ordinary means.

The levels given in our stats block are hypotheticals. The full scope of her healing factor  remains unrevealed.

She used to be in charge of the Healing Ray, so i’ve assumed specialised maintenance technical skills and training as a doctor.

Giuana stated that she used to be person in charge of the unique Purple Healing Ray technology on Themyscira. It seems that she grew severely addicted to the effects of the Purple Ray. Initially she’d cut herself to experience a quick rush from the Ray healing her flesh. She escalated to discreet mutilations and chopping off her own limbs to experience a much stronger effect from the Ray.

The repeated, gradually escalating exposures to the Purple Ray saturated her body with its energy. That gave her her intrinsic regenerative powers.

How Giuana left Themyscira is unrevealed. It is possible that she felt she deserved more punishment and suffering than the Amazons would ever deal. Her Purple Ray addiction had reinforced her slight masochistic issues until they became an actual pathology.

The world of man

In any case, she became a mercenary and bodyguard in the outside world. She apparently looked for jobs that would expose her to the greatest amount of brutality and pain. 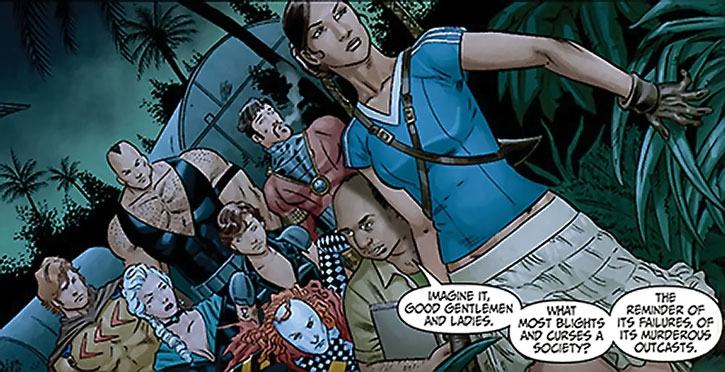 Giuana came to work as the lead bodyguard for Mr. Smyth and his agents as they built their super-Guantanamo. She was thus present when the situation fell apart due to Wonder Woman’s arrival.

Recently hired super-mercenaries the Secret Six started fighting among themselves then turned against their employer. Giuana engaged Jeanette the banshee and Catman in close combat. She fared well – in part out of luck as one of her blows severed Jeanette’s choker. But Secret Six member Deadshot then came in and shot her four times between the eyes.

Given her regenerative abilities, Giuana presumably recovered from this. Perhaps quickly enough to flee before Wonder Woman and other Amazons could start mopping up and organising relief and evacuation efforts.

Giuana is tall even by Amazonian standards. She is as athletic and muscular as any of her sisters. She dresses using common clothing you’d find in most Southern or Central American countries, plus combat boots, and wears sunglasses. Her features and complexion can easily pass for Central or South American.

The silent, tall, tense Giuana comes across as particularly stony and intimidating despite not dressing in a martial way. In fact, her manner of dress somehow makes it worse. She usually stands some distance away with a stony air. Or sits with her arms crossed and a vaguely hostile expression.

Perhaps out of habit, Giuana will occasionally perform an Amazon fighting salute before attacking. That means crossing her wrists in front of her chest and standing straight, with both swords in hands.

Most of the time Giuana is just a silent, stony-faced, disciplined bodyguard type. She accompanies her principal everywhere.

She obviously thinks that the best defence is a brutal offence.

She reportedly cut her tongue off every evening, so for much of the time she’s mute. But her tongue regrows during the day and she becomes able to speak again. Since her employers do not usually know about her regenerative powers, they assume that she’s silent because her tongue is permanently cut off.

Giuana is trawling the worst, most brutal and unforgiving depths of Patriarch’s World. This is so she’ll run into people who are actually capable of hurting her. Most of the time it seems that she wants to get wounded so she can feel the effects of the Healing Ray within her. But it occasionally feels like she wants to be punished and hurt for something she did. 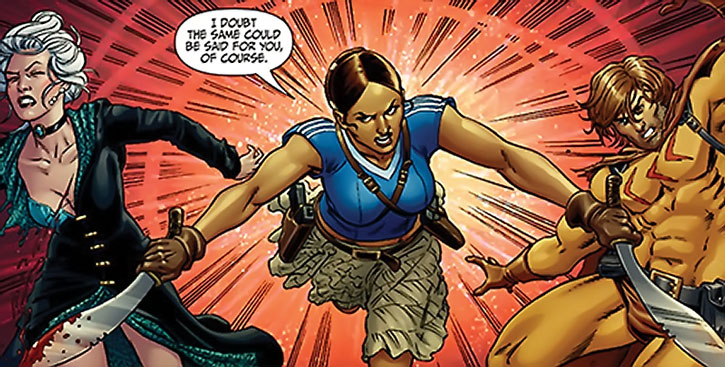 In a fight she just wades in. She actually wants to be hurt, preferably by people who hit really hard so she can experience a highest intensity of Purple Ray effects.

Still, she’s an Amazon – her nature is to fight to win. She’ll take more risks than most in the hope of getting hurt, but she fights to dispatch the opposition with force and alacrity. Her addiction doesn’t really diminish her combat efficiency.

She has no loyalty whatsoever toward her fellow Amazons. She generally seems to have rejected her whole heritage except for the fighting and soldierly skills. For instance she no longer wears her bracers.

Giuana is quick with the Amazon trash-talk, essentially calling all of her opponents imbeciles and wimps to provoke them.

“I don’t think I can be killed. I doubt the same could be said for you, of course.”

Bonuses and Limitations:
Enhanced Initiative is a Skilled Power.

There’s little material about Giuana and the stats are thus very tentative. The game stats use the same – not thoroughly supported – sense of scale for elite Amazon warriors as with Alkyone and the Circle.

If she does get the Initiative she will almost always Press the Attack, making her both fearsome on the AV front and more likely to get wounded.

The high initiative, all-out attack and multiattack make Giuana very dangerous on the offensive and she uses them since she wants to be hurt so she can heal and do not care much about her defences. 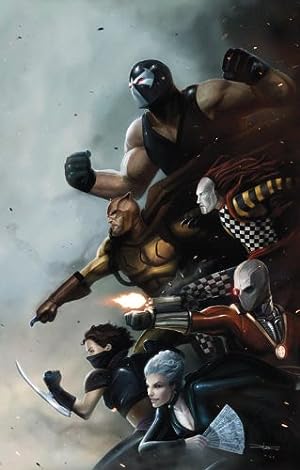 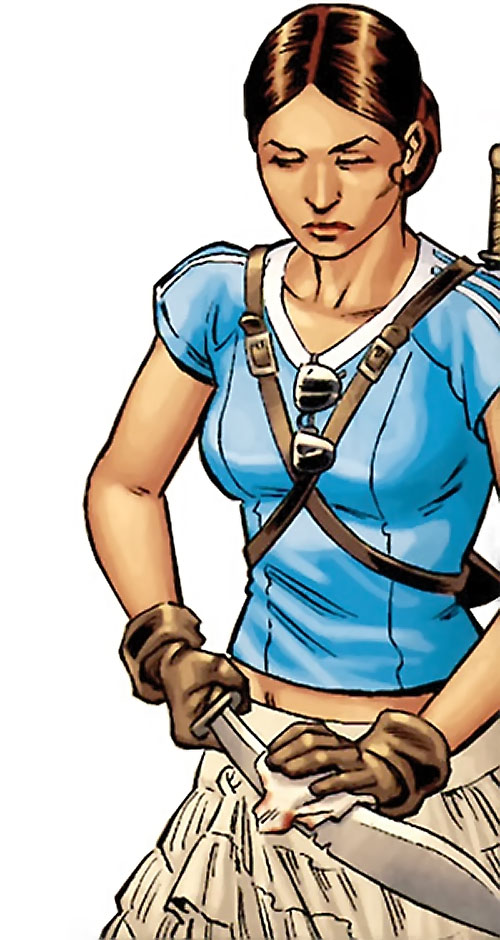