Gladiator is the most powerful known member of the Imperial Guard. In addition to his extraordinary strength (he once lifted the top 35 stories of the Baxter Building), he is virtually invulnerable, and has survived an explosion of nearly nova force uninjured. However, he is vulnerable to certain unspecified wavelengths of radiation.

Gladiator can fly at speeds rivalling those of starships, and can achieve faster than light speeds in hyperspace. He can survive unprotected in the vacuum of outer space, and apparently either does not need to breath or can survive for long periods of time (as when he flies through outer space) without breathing.

Gladiator can project intense heat, possibly infrared radiation, as beams from his eyes. This heat is said to reach temperatures comparable to those produced by stars.

Gladiator himself has claimed to be capable of moving planets and flying through the hearts of stars. He may have been indulging in hyperbole in saying this, for his powers have not been demonstrated to be that great.

Susan Richards of the Fantastic Four once knocked Gladiator unconscious with her force field when he was momentarily in doubt about the effectiveness of his own powers. Reed Richards hypothesised that Gladiator’s moment of vulnerability was the result of a brief weakening of his will power, and hence of the psionic  reinforcement of his resistance to injury.

However, it is also possible that Gladiator’s vulnerability was a delayed aftereffect of his earlier exposure to an unknown form of radiation that was apparently capable of killing him.

In recent years, the power of Gladiator has been downplayed somewhat so he could be beaten by the X-Men or Thor. This began when Byrne stated that his power level sharply drops if he loses his self-confidence. Whether or not he losses is confidence is mostly a plot device. His Loss Vulnerability allows for this varying power level.

Sometimes, he’s an unbeatable behemoth. At other times, just a minor character seen on the losing side of a battle scene or decked by a single major attack.

As an anecdote, Gladiator’s powers have been theorised by Byrne (and Reed Richards) to be psionic, and his STR was explained by tactile telekinesis. Byrne’s Gladiator was a trial run for Byrne’s Superman in many ways. The more current explanation for Gladiator’s power is that as long as he can imagine/visualize himself doing something, he can do it.

Gladiator’s first known encounter with Earth people came when he and other Guard member battled the X-Men on the order of the mad former Shi’ar Emperor D’ken. After D’ken was deposed, his sister Lilandra Neramani became majestrix, and hence the Imperial Guard and Gladiator obeyed her.

When Lilandra made it known to the X-Men that she intended to end the potential menace she believed was posed to the universe by the first X-Man known as Phoenix, Lilandra’s lover, Professor Charles Xavier, demanded that the matter be resolved through a trial by combat. In this trial Gladiator and other Imperial Guard members were again pitted against the X-Men.

Later, Gladiator came to Earth and battled the Fantastic Four in the mistaken belief that they were alien Skrulls who had used their powers to alter their appearance.

Lilandra’s sister Deathbird staged a successful coup and became the new majestrix of the Shi’ar Empire. Despite Gladiator’s loyalty to Lilandra, who was now a hunted fugitive in her own empire, and despite his qualms about certain aspect of Deathbird’s rule, Gladiator continued to serve the Shi’ar Empire in his role as a prætor of the Imperial Guard.

He was part of the subsequent political struggles that saw the return of Lilandra to the throne, and the Warskrulls conspiracy. He also was an important warrior in the Kree/Shi’ar war which lead the Avengers to start Operation : Galactic Storm to protect Earth from any collateral damages.

Gladiator is huge and muscular. He’s got light purple skin and a dark blue mohawk. His costume is red with blue-black parts, and his cape is red. He wears an open triangle symbol on his chest.

At first sight he is a straight, somewhat pompous soldier and agent who places honor and duty to the Empire above anything else. He is also actual superhero material, with a Silver Age  style, but that rarely comes to light in his duties.

Gladiator II is very aware he’s the Shi’ar last line of defense and that, should he falls, no further defense would have a hope of holding.

In the DCU, just go for the full Daxamite/Kryptonian treatment, giving Gladiator stats in the upper range for those species (Superman’s stats would work).

Gladiator would be the last member of a third Kryptonian -like race in the Shi’ar empire (does anybody knows how many Kryptonian-like race are there left after Zero Hour ?)

Drawbacks:
Loss Vulnerability (loses 3CSes from all Powers and Attributes (with a minimum score of 02 APs) if he loses his confidence in himself, is mentally dominated or takes Spiritual RAPs), Fatal vulnerability (to an unknown radiation), Various (Gladiator cannot spend HPs if his Loss Vulnerability kicks in).

This writeup is old enough to still have Superman with a DEX of 15 as a reference point. Nowadays it would probably be a 09.

Helper(s): Z, Rod H ; texts for much of the Powers and History have been taken from marveldirectory.com . 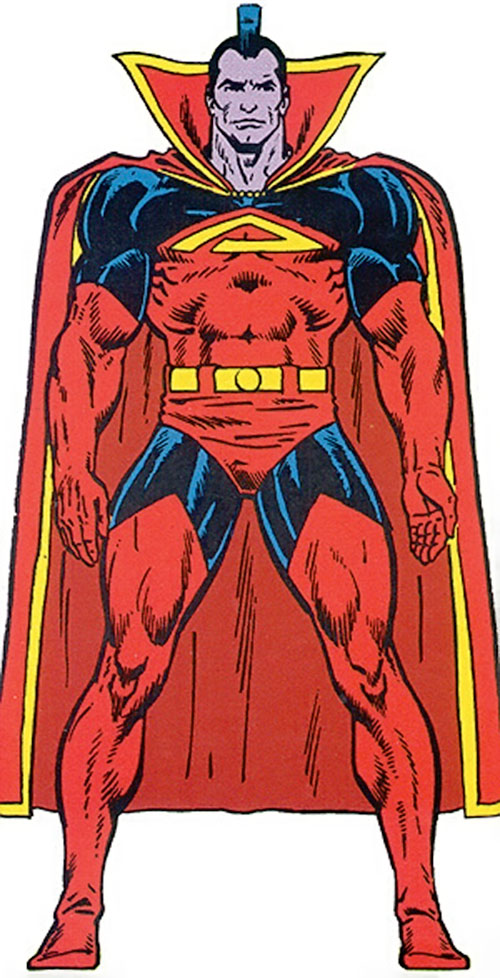 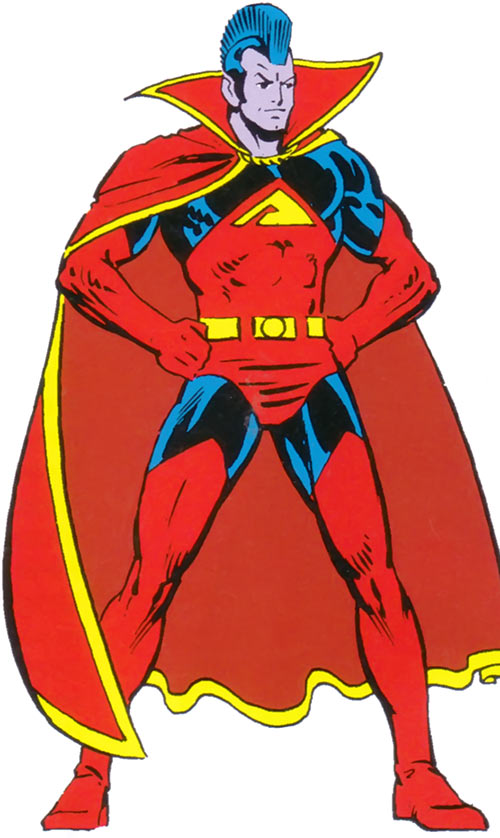