And anyway the plotting is poor and the series was quickly cancelled after considerable fan acrimony.

At this stage, Gleam has crude but effective magical abilities. Her main things are :

With actual training, she undoubtedly could expand her range of spells and lift some of her limitations.

She once managed to shoot lightning from her hand, but that was a freak happenstance.

Gleam is in good shape, smart, mature for her age and has been trained as a junior blacksmith.

She seems to have a rough understanding of anatomy. Perhaps her healing power allow her some crude medical imaging capabilities and she learned from this whilst healing people and animals.

Gleam is the daughter of Veness, a teenage apprentice at the Tower of Magi in Ferelden. Gleam’s birth date is uncertain. Greagoir of the Templars was already monitoring the Tower back during Veness’ time, but he is known to have held this command for decades.

It is thus possible that Gleam was born during the early years of the Dragon Age, not too long after the Fereldan independance. 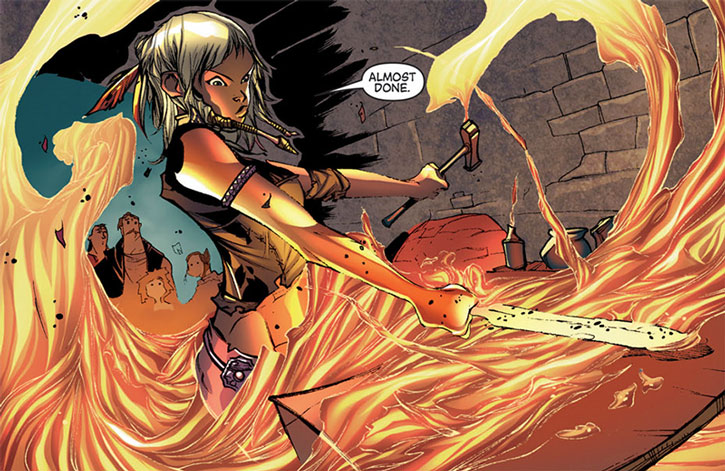 Veness had an illicit fling with a young Templar named Sadatt, and ended up pregnant. The Templars, who wrongly assumed that she had had sex with another mage, were furious. A mage apprentice in love with Veness covered up for her by claiming that he was the father. Nevertheless, Veness ran away while heavily pregnant so the Templars wouldn’t take her baby and hand it over to the Chantry.

It would seem that the child of two mages has a much greater chance of being a mage themselves. For instance Wynne, another mage at the Tower, had her baby taken from her in similar circumstances and her son is a mage of significant power. The Witch of the Wilds, Flemmeth, likewise had daughters who were also witches, though she may have cheated the odds using magic.

Templars with their lyrium-infused metabolism may also have greater odds of having a magically-active child if having sex with a mage. Howbeit, the precedent with the Dwarves leads one to suspect that lyrium exposure may considerably decrease fertility.

Veness gave birth by herself. She handed the baby over to a passing commoner – telling him that the baby’s name was Gleam.

Sadatt and other Templars then found and murdered Veness. Greagoir had put Sadatt in charge since he was considering expelling him for insufficient performance. And at this stage Sadatt thought that a mage apprentice was the father.

As to the passing commoner, he was one Lomo Kettlemaker. Kettlemaker was a Fereldan blacksmith living far away from the Tower. He and his wife adopted and raised the baby girl. When they discovered that Gleam was a mage, they hid her talents so the Templars wouldn’t take away and hurt their daughter.

This dangerous decision paid off. Gleam turned out to have healing talents and crude fire magic, the latter being quite useful in a smithy. When she was 17 Gleam also turned out to be an enchanter, as she forged a magic shortsword that could cleave iron.

After this first significant use of her magic, Gleam saw her birth mother in a dream. Veness was now a Fade spirit and presumably a demon. Yet she tried to protect her daughter by warning her about possession.

Proud of his adoptive daughter’s capabilities, Kettlemaker then sent her on an expedition. Gleam was to reach the Dwarven city of Orzammar to trade for metal. She was assisted by a younger cousin, and by the youngest Kettlemaker kid – Agmo.

Gleam’s cousin bragging about the magic shortsword attracted the attention of the Dwarven underworld – presumably the Carta syndicate. They had a one-armed agent named Minderel follow the youths. His job was to assert whether Gleam was an enchanter and capture her if she was.

Meanwhile, bandit raiders attacked the Kettlemaker homestead and murdered everyone. 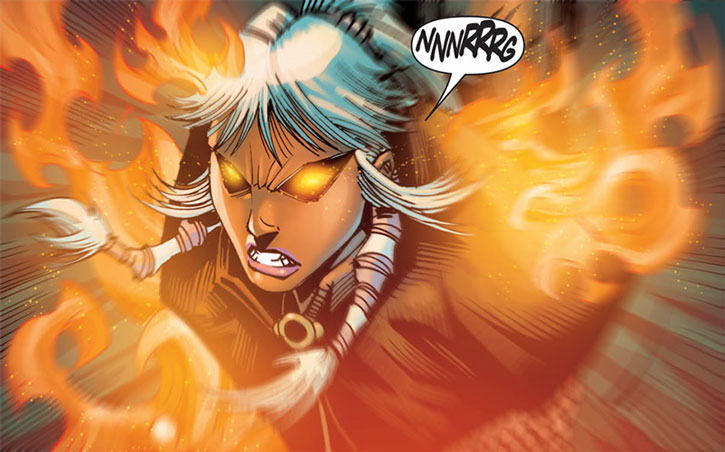 After discovering the carnage, the kids trekked toward relatives of theirs. They were easily tracked by Minderel. and they were easily spotted by local Humans, who warned the Templars that Gleam was an apostate mage.

The kids also had a chance encounter with a blood mage who offered to teach Gleam, but she warily refused.

Templars led by Sadatt soon caught with the Kettlemaker youths. They killed Gleam’s cousin when he tried to defend the other two. Still shadowing the kids, Minderel came in and helped Gleam and Agmo escape underground.

Though this was initially successful, they oh-so coincidentally ran into the raiders who had killed the Kettlemakers. As a result, Agmo had little choice but to run to the Templars for help. The Templars overcame and killed the bandits.

Be thankful for what you’ve got

By this point, Sadatt had intuited that Gleam was his and Veness’ daughter. Though he had a lengthy track record of killing apostates rather than capturing them, he opted to bring Gleam and Agmo to the Tower.

Minderel also let himself be captured so Gleam and Agmo would be spared. Veness appeared in a dream, to confirm that Sadatt was Gleam’s father.

While Gleam hated Sadatt’s guts, she was stuck at the Tower. But there she would at last learn more about her magic, albeit as a lifelong prisoner.

The series ended at that point, though Gleam presumably had further adventures. What was her fate by 9:30 Dragon (the start of Dragon Age: Origin) is unrevealed. But she may not have been at the Tower during the Uldred rebellion.

Gleam has significantly darker skin than most Fereldans. Not that people actually care, but that makes her stand out.

As a real-world equivalency she would be half-Scottish and half-Moroccan, or something along these lines. Albeit with an improbable hair and eye colour.

Gleam is independent, fierce and quite level-headed for her age. Still, she obviously lacks in experience and self-reflection.

While she feels that her magic is crude and limited, she is nevertheless aggressive and hard-charging when conflict erupts. By contrast, an older person would realise that they’re just going to get themselves killed. In less physical situations, Gleam is more collected.

Though she managed by running on adrenaline, Gleam was shocked by the death of her beloved adoptive parents. And she hates Templars, especially after they killed her cousin.

She intuitively recognised Veness as her mother. Yet she didn’t understand what is going on since nobody had educated her about the Fade.

Connections:
Sadatt of the Templars (Low, and Gleam is very unlikely to use it), Veness (Low, and is a Fade ghost).

Writeup completed on the 6th of September, 2014. 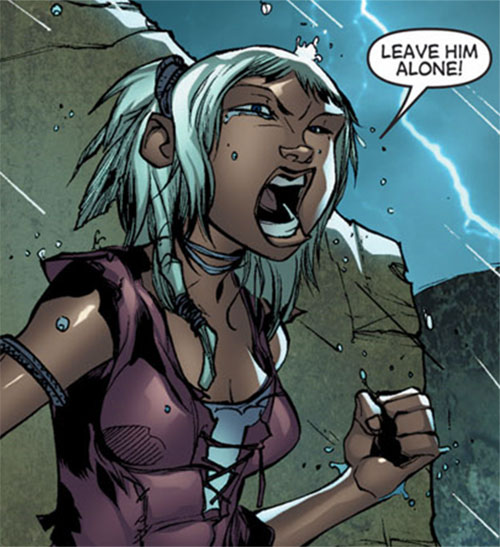 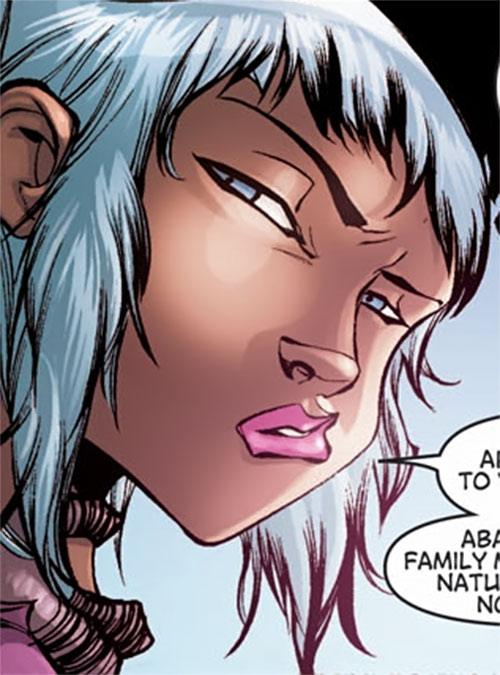 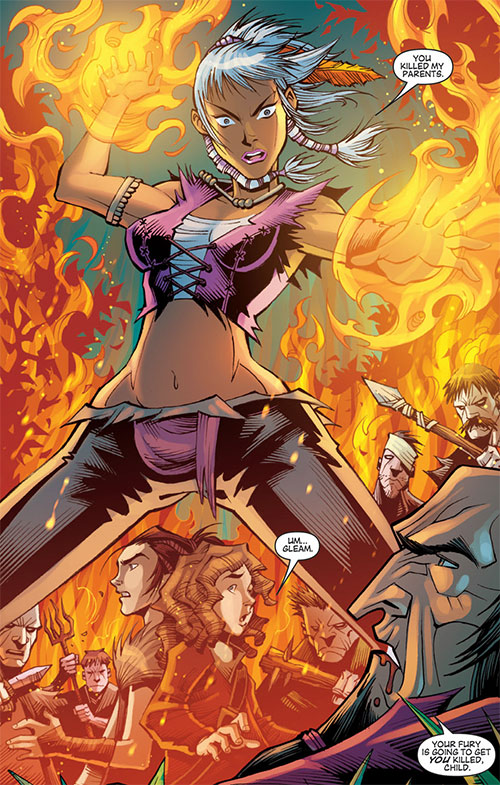 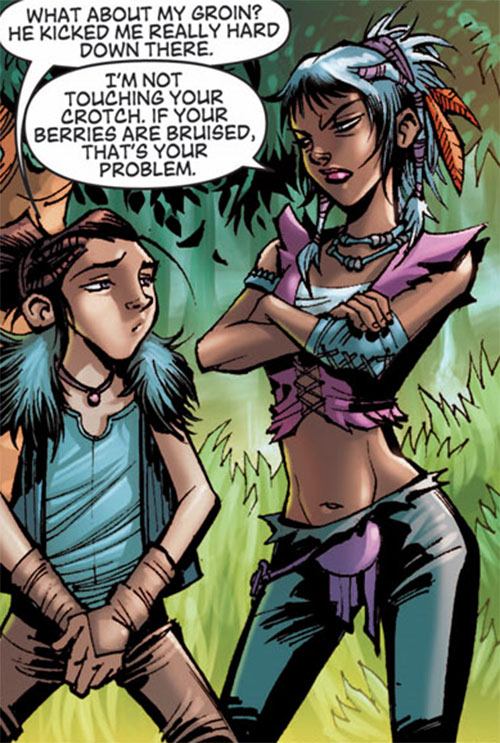