Stone has been transformed into a completely liquid life form. Each molecule of this liquid is imprinted with his intelligence and under his complete control. His form:

He can alter his form into different forms of liquid including ice, or an adhesive form.

His form has been temporarily dispersed by superheating him into steam, but he has managed to pull himself together afterwards.

This is a room within Superbia which contains a pool of gelatine software. Immersion in this tank allows Glob access to the sophisticated computer system which controls Superbia.

(The International Ultramarine Corps entry has most of his history.) 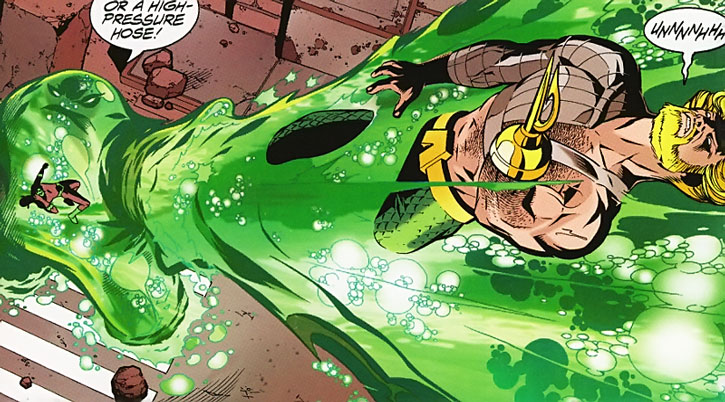 Stone served in the marines  when he selected for the Ultramarines project. The process transformed him into an entirely liquid life form. He adopted (or was assigned) the identity “Flow”. He changed to “Glob” once they parted with the military.

Glob was initially a fairly straightforward soldier. He followed orders and took the direct approach to matters. It appears that the nature of his powers, and the change in his circumstances, has had an effect on his personality. He forced him into making decisions in situations.

The Rain Room allows him to control Superbia, and gives him enhanced surveillance abilities. As a consequence, he has become more likely to be directing the battle from above. He still enjoys betting into battle though, and leading from the front.

Like the other original Ultramarines, Glob is a super-soldier rather than a super-hero. As such he is willing to kill opponents if he feels it is necessary.

“My entire body is composed of smart liquid. I’m more ‘Aquaman’ than you’ll ever be. I have complete control over my molecular structure; I can become ice or glue. Or a high-pressure hose !”