Global Frequency (written by Warren Ellis) only ran 12 issues from 2002-2004. But it remains one of my favourites. Essentially, it’s X-Files done as short, high-tempo action thrillers depicting last-resort, high-competence efforts to deal with strange threats.

Though we don’t see much of these characters, they seem really useful. So they have a profile for much the same reasons as Dutch Schaefer’s team (from Predator) does.

For security reasons, the team went unnamed. For readability’s sake this article gives them first names, but these are completely made up. Hence the quote marks.

The firearms are unidentifiable. Glenn Fabry’s art is great and well-suited to this story, but for the three persons in the world who need to identify the ordnance it’s a problem. So I just took informed guesses.

“Stacey” had recently left the CIA. She likely was with the US military before that, and was wearing Navy “blueberry” fatigues. She may have been a former SEAL. In the real world no woman could apply for the BUD/S selection course before 2017, but in the GF world this should be possible.

Her right arm and shoulder are entirely cybernetic. Part of her torso is reinforced to allow for the arm to move. Her spine and back have additional tensile support to allow for certain movements, such as lifting something, without killing herself. There’s a chip in her brain to help process the data from the artificial nervous system in the arm.

The arm cannot be lastingly disguised, as most kinds of artificial skin would rip away. Her left breast is presumably a cosmetic prosthesis, since I don’t see where her left Cooper’s ligaments would attach.

Agent 436 didn’t seem to carry a weapon. She instead engaged in hand-to-hand combat, and appeared highly trained and physically conditioned for this. It seems likely that her bionic punches are deadlier than any small arm.

He’s some sort of weapons engineer, specialised in less-than-lethal warheads.

“Drew” carries a big rucksack filled with specialised and/or experimental grenades. The point is to have the right ammunition at hand, to lob in the most appropriate firepower. Presumably, if the mission had involved longer ranges he’d also have brought a launcher.

We’ll assume that he also served as an ordinary soldier in his youth.

A tall, very muscular Israeli (or Israeli-American, I suspect) soldier and heavy weapons expert. Some Israeli special-operations-capable units (such as certain Navy commandos) do have servicewomen, so this might be part of her background.

She was operating an odd weapon. It may have been intended to be a semi-auto grenade launcher, but it clearly can’t be one. With the lack of information I’ll arbitrarily assume a Rheinmetal MG3 7.62mm machinegun, with the equivalent of the modern KWS improvements (picatinny rails, revised foregrip and stock, better safety, etc.).

This gun would have a railed-on 9″ M203 40mm launcher, a railed-on tac flashlight, and its sling is replaced with a modified guitar strap.

If you want to go more sci-fi, you could assume a “smartgun” instead — see the profile for Private Vasquez from Aliens. El Riesgo Siempre Vive, as they say. And the rear of “Avigail”’s gun seems modelled after Vasquez’ (hence the stealth MG42 reference in picking an MG3).

An experienced, technically-minded sharpshooter. He had an odd-looking, high-performance sniper rifle. I’m going to arbitrarily assume a Blaser R93 Tactical in .338 Lapua Magnum, since it matches these parameters and the in-story use.

“Gunther” had a high level of initiative. He was actively looking for solutions and tactics. He seemed to have been a high-end assassin, perhaps for the CIA.

These four operators were all elite military assets, with high intelligence clearances. They all knew about the secret Big Wheel US Air Force weapons development centre, so sending them there wasn’t a major security breach.

Several of these operatives had already worked with Miranda Zero. In particular “Avigail” is clearly seen in #12, working with John Stark. See Stark’s profile for basics about that op. A man who could easily have been “Gunther” accompanied them.

Only shreds of information were mentioned :

In 2003, disaster broke out at the secret USAF weapons development facility Big Wheel, in Nevada. After seven fatal failures, Big Wheel had developed an horrifyingly lethal cyborg soldier, Captain Richard Quinn. To justify budgets and being an USAF project, he was classified as a bomb.

Quinn had had a catastrophic psychological breakdown. As a result, he massacred more than 90% of the Big Wheel personnel. Sending more troops would clearly serve no purpose. Thus, the three options were :

Miranda Zero was allowed to take her stab at the situation. With its customary speed, the Frequency rounded up field operatives with an intelligence background. Zero also seemed to have favoured operatives who didn’t mind dying, given the risk profile.

A swarm of nearly 30 experts was also assembled online.

Zero and her four operators came in by helicopter. Their advisor swarm allowed them to quickly open the doors, locate the last few survivors, track down Quinn, and receive detailed information about his capabilities.

The team courageously attempted to de-escalate, but Quinn was completely irrational. ”Avigail” was slain holding Quinn back, depleting most of his Hero Points . This allowed “Stacey” to close in while Ms. Zero landed one lucky pistol shot. ”Stacey” could thus force Quinn prone with bionic punches.

She ordered “Drew” to light them both up with an EMP  charge – knowing that she wouldn’t survive this either.

However, Quinn was heavily EMP-hardened. He activated one of his back-up nuclear generators to rise again. Zero and “Drew” were forced to run, with “Drew” using a barrage of grenades to slow Quinn down. The op was clearly going to fail.

However, “Gunther” had come up with a plan, based on information from the advisor swarm. ”Gunther” decided to also sacrifice himself – to save Los Angeles, because he considered that he owed Miranda Zero that much, and to honour the two other Global Frequency soldiers who had just fallen.

He ordered Miranda and “Drew” to keep sprinting and leave on the last helo. “Gunther” then shot Quinn from ambush. The sharpshooter had listened as the mad cyborg had rambled about the location of his backup reactor after “Stacey” had been killed.

The precisely-placed bullet detonated the nuclear pile, taking Quinn out and preventing him from ever rebooting.

From the technical briefing, “Gunther” knew the consequences. The radiation from the punctured reactor would make the entire Big Wheel perimeter off-limits for about 50 years, and bollix all computer storage within the base.

“Gunther” had waited until the Global Frequency helicopters were out of the contamination zone, but was himself close to the radiation leak. He enjoyed one last cigarette whilst sitting on Quinn’s corpse, then presumably shot himself to die cleanly.

“Stacey” has green eyes, a blonde crewcut, and a superior musculature. She wore the “blueberry” Navy fatigues and a drab olive tank top. She seemed to be about 6′ tall.

The interface between her bionic arm and her flesh body looked ghastly, and it was leaking something (oil ?) over her tank top.

“Gunther” was dressed entirely in black fatigues, with a commando-style black woolen hat. He had a pale skin, sharp features and piercing blue eyes.

He seemed to be in his late 30s, and was reminiscent of Agent 47.

“Avigail” had olive skin, brown hair and eyes, and wore a tight NATO green jumpsuit plus reinforced gloves. The sleeves were off, to expose a bodybuilder’s ripped arms and a large tattoo over her right shoulder.

The left side of her jaw and her neck were badly scarred – perhaps a burn.

The strap of her big guns had small decorations that evoked a weird mix of Middle-Eastern and Mexican motifs.

“Drew” was a balding guy in his 30s, wearing a simple black T-shirt and olive drab fatigues. He came across as more meek and less assured than the soldiers around him.

“Drew” had strong moral principles, but lacked field experience. Though he carried his weight, the mission likely shocked him. He came across as somewhat dweeby – but this was because everyone else was such a stone-cold hardass.

“Avigail” seemed wary, sceptical, in an “once bitten twice shy” way. She asked a lot of questions to make sure that the op was legit, that the people with her weren’t bad guys, that Quinn was indeed lost to insanity, that the Frequency wasn’t being manipulated, etc..

She was entirely willing to fight to the bitter end, but needed to be sure of her cause.

“Stacey” was a very professional operator, sharp and focused. She of course was the best-placed to understand why Quinn had become mad. Having been turned into a cyborg revolted her, but she refused to give in and maintained her discipline.

Once she saw an opportunity to die, but in an honourable and worthwhile way, she took it.

“Gunther” was also disgusted by his career as an assassin. He greatly appreciated that Miranda Zero had gotten him out of this life of wrongful carnage.

When “Gunther” came up with his suicidal save-the-day plan, he was satisfied. After a lifetime of shooting the wrong people, he could die shooting a mass murderer and saving untold innocent lives. He saw this as his redemption. 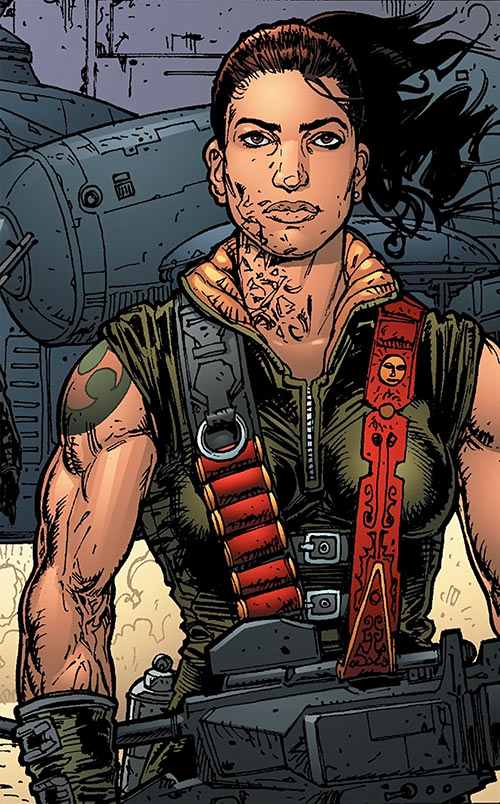 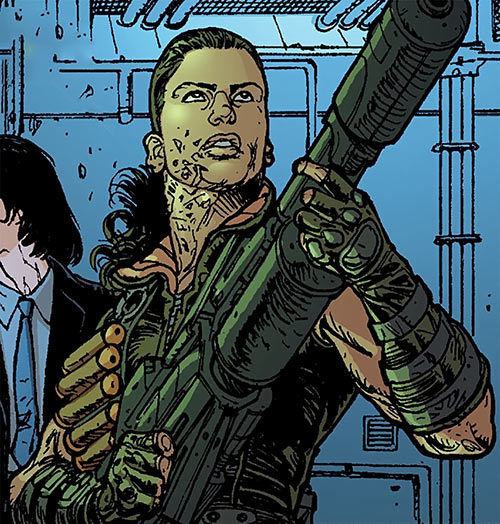 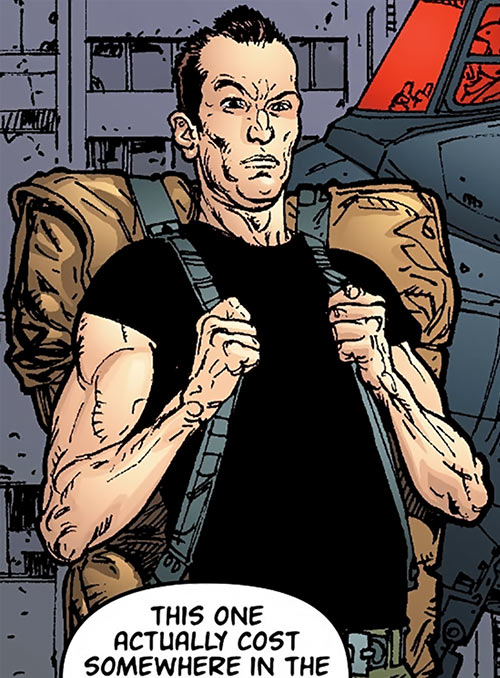 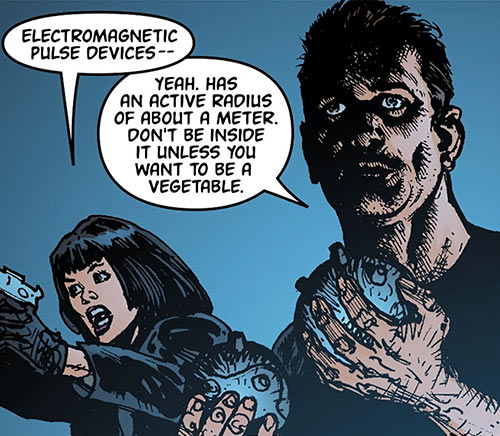 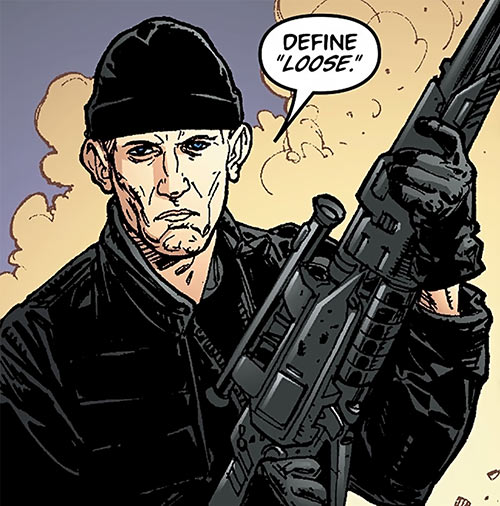 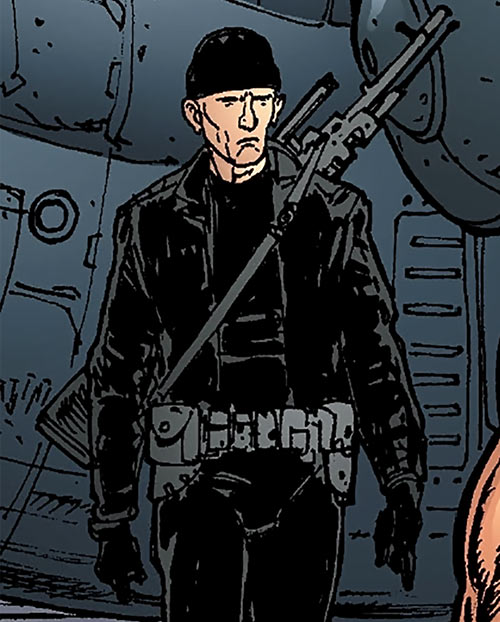 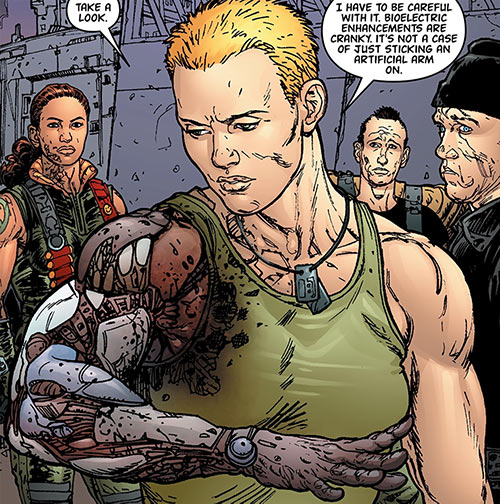 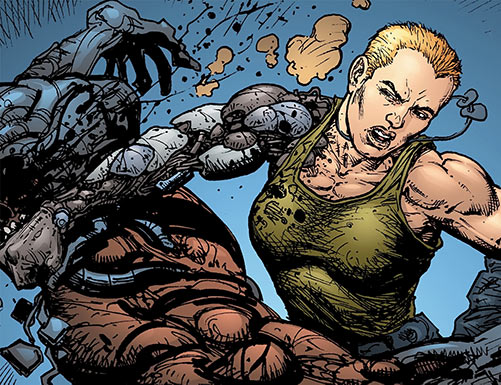