Ms. Lau was in the seventh issue of Global Frequency, “Detonation”. It was published in 2003. This entry has S P O I L E R S for everything in it.

For more context, you can read our Miranda Zero character profile.

Jia doesn’t appear much, but she seemed cool.

British intelligence knew her face (this is a 2003 story, so the retrocession of Hong Kong was still recent). This likely means that she’s not an espionage agent per se, but more of a tactical and termination asset. Or the equivalent of a “Minder”, such as Tara Chace, from the fictional version of SIS in Queen and Country.

The art for this story is stylised Simon Bisley material, so weapon recognition is difficult. On the other hand, everybody gets a decadent rock star outfit, so that’s a win.

Jia is wielding a stakeout-type 12-gauge shotgun. Since I need to posit a specific model for ammunition capacity in the DCH stats, let’s assume a Remington 870 in a modern “Witness Protection” configuration. Likely meaning :

As can be imagined, such a specialised weapon requires well-muscled arms, strong shoulders, high-ish body mass, and a specific gripping technique. Having a 110 lbs person using one thus looks suitably cinematic.

Jia Lau was identified (perhaps not reliably) as “Chinese Intelligence”, which we’ll assume means she may be a MSS (中华人民共和国国家安全部… so yeah “MSS” is simpler) agent. The director of SIS recognised her as “the young lady from the Lam case in Kowloon”. Lau came to work for the Global Frequency at an unknown date.

(“The Lam case” might be a sly reference to action movie director Ringo Lam . Mr. Lam might be best-known for City on Fire, with Chow-Yun Fat. OTOH, my impression is that “Lam” isn’t a rare last name in HK.)

In 2013, intelligence about People’s Republic of China and Northern Korean stepping up operations Westward surfaced. This led to a meeting in Berlin between the heads of British, Russian and German intelligence services.

However, the Global Frequency thought that something about this intel seemed fake. Agent 944, a Berlin police detective, obtained cryptic information from a child prostitute who had narrowly survived a murder attempt. Seizing this weak signal, a GF smart mob unravelled a major terrorist plot.

The fake intel had been specifically leaked to kill all three intelligence directors in an ambush. This would be followed by a nuclear detonation in London, then presumably more fake intel, to trigger a major war across Eurasia.

You’re on the Global Frequency

The Global Frequency scrambled a large task force in Berlin as Miranda Zero flew in. Remote controlled motorcars were hurriedly prepped to take the place of the intelligence directors’ convoy. Miranda Zero then convinced the principals to collaborate while the GF liaised with Berliner police.

The decoy convoy allowed GF surveillance to locate the attackers, who fired rocket launchers at the cars from nearby rooftop. However, that meant a half dozen shooters scattered among high-rise buildings. Even with the Berlin tactical officers coming in, the operatives had to disperse to cover enough ground.

Ms. Lau terminated one of the more distant shooters. Another was captured, and provided the location of their leader rather than face Mr. Grushko.

Jia was the first to reach the under-reconstruction floor with the target. Given the urgency — a nuclear charge was still out there somewhere — she proceeded with a high-risk solo search. She located the target, but was shot whilst making entry. However, her keen reflexes allowed her to shoot back. 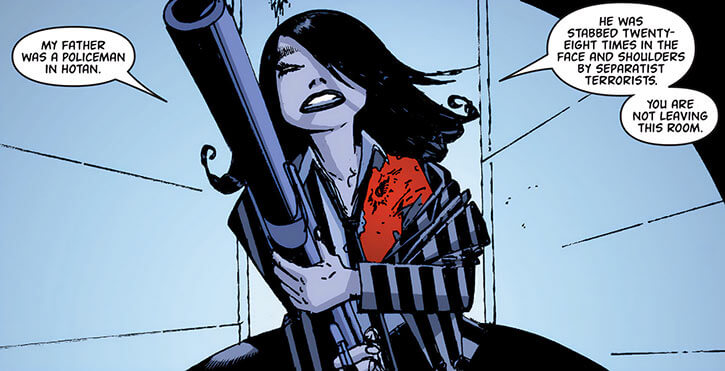 Both Lau and the terrorist thus found themselves severely wounded, rapidly losing blood and in a Mexican standoff. In his off hand, the terrorist held his satphone, ready to send the detonation code to the bomb. He demanded to leave to continue with his nihilistic agenda. He noted that shooting him dead before he could press “Send” was unrealistic.

Assessing the risk, Jia Lau sacrificed herself. She shot her opponent in his phone hand, thus leaving herself open to return fire. The terrorist shot her dead, but his hand had been torn off and the phone blown to smithereens.

He attempted a bluff, pretending that he could still send the code. But Aleph had clearly heard the phone explode over Ms. Lau’s comms. As he opened the door, the terrorist was decapitated by Mr. Grushko, avenging Jia.

One gets the initial impression that she’s tiny. But this is an artefact of her first appearing next to the hulking Mister Grushko.

A fast and daring professional, with quite a bit of field experience given her age.

Jia’s dad was a policeman, who was horribly murdered in Hotan by separatists. Since their last name sounds Han, he likely had been sent there as part of the response to long-standing political tensions. His daughter grew to hate all sorts of terrorists and separatists, apparently favouring centralised control at all costs.

Ms. Lau would thus die rather than let a terrorist walk, which is exactly what she did. 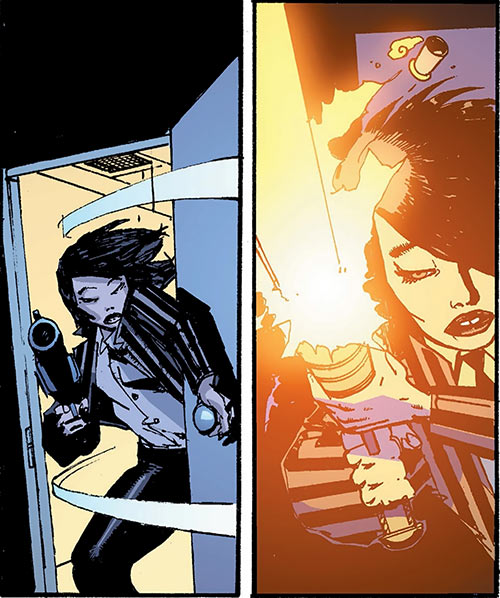