For more context, you can read the Miranda Zero character profile.

“Bombhead” has more of an ensemble cast, so there isn’t a focus on John Stark (unlike with Sita Patel in “The Run” or Lana Kennedy in “Invasive”). But he’s a good base for an elite ex-military plainclothes agent, which is an important skillset for Global Frequency operations.

Aleph, who doesn’t have a military background, calls Stark “one of those delta seal special forces thingies”. It is entirely possible that John served with the First Special Forces Operational Detachment (SFOD-Delta, aka “Delta Force”), since Global Frequency normally recruits agents who really know their business.

SFOD-Delta training, operations, and emphasis on stress tolerance would generally match Stark’s performance in the story.

In the story, Stark’s skills are closer to that of a police officer. These include surveillance, tactical interception driving, emergency medical response and handgun operation. It is thus possible that he joined a police department after leaving the service, though he seems too young to have had both careers.

A simpler hypothesis is that he chiefly worked in joint intelligence ops as a Delta operator. From there it would have required little additional training to become a highly-paid security consultant using the skills mentioned above.

Perhaps Stark works for megarich people under grave threat to identify, locate and take out their would-be attackers. A personal (or corporate) counter-terror consultant would make sense in the Global Frequency universe. Our game stats assume that this is the case.

John was armed with the standard-issue M9 semi-automatic pistol (without a rail – the M9A1 didn’t exist yet).

He was driving a black Lamborghini Murciélago , which implies significant wealth. Especially since in 2002 it still was a recent model. Though it may have been a gift from a filthy rich client.

A Lambo is an odd choice for a surveillance op. But given the Global Frequency’s operations’ velocity, Stark likely just grabbed a go-bag, hopped into his personal car and raced to the site to start working.

In 2002, Global Frequency expert Misha Norton detected electromagnetic anomalies on the West Coast of the United States. The Global Frequency tracked down the signal, dispatching Agent 288 — John Stark — for surveillance.

(Ms. Norton had access to US spy satellites, apparently through hacking. In the Global Frequency universe, top-notch hackers can achieve cinematic  results.)

Within hours, the Global Frequency experts swarm and Stark had determined that one Janos Voydan was the source of the anomaly. He was having seizures of worsening severity, which were tied to increasingly massive EM emissions. Voydan stumbled in the middle of a road, and was hit by a car.

Stark rushed in. Voydan was still alive, but his eyes were emitting energy globules. He hit Stark and left in a stolen car, but Agent 288 quickly recovered and gave chase. The blow indicated that Voydan had elite combat training, possibly better than even Stark’s. Something bad was clearly afoot.

You’re on the Global Frequency

Aleph had an helicopter scrambled from the San Francisco International Airport – a decommissioned AH-1 Cobra  flown by Agent 702 (Allison Fitzgerald). It was meant to evacuate Voydan once he could be secured.

Aleph also contacted GF’s main man at MIT , to pore over Norton’s newest satellite readings. The EM signature indicated that a miniature black hole was 30mn away from appearing in San Francisco. The Hawkings radiation  readings also reminded the MIT physicist of Russian research in wormholes , run by one Ivan Alibekov during the Cold War.

Alibekov had since moved to the US, but he lived in the boonies and off the grid. However, Global Frequency director Miranda Zero was already on site. Alibekov readily agreed to share what he knew.

During the Cold War, Janos Voydan had both been a Soviet Special Forces soldier, and a psionic  talent. He was what the Soviets called an “apport” – he could teleport small objects to him.

During the 1970s, Abilekov’s team repurposed a NASA  prototype – a tiny radio that could be implanted in the human brain. Their variant could greatly stimulate Voydan’s psi talent. It was linked to a nuclear bunker deep in the Soviet wilderness. By concentrating, Voydan could open a wormhole through which the nuclear warhead would fall, landing at his feet and detonating.

Voydan was sent to infiltrate the US. He created a life for himself in San Francisco, but could at any point obliterate the city. However, the USSR fell apart and the Cold War ended. Janos Voydan chose to carry on with his life in the US.

But Abilekov’s prototype implant had never been meant to stay in an agent body’s for 30 years. It was now breaking down, making Voydan delirious with pain and gradually opening a wormhole in the nuclear bunker.

As Stark was attempting to force Voydan’s car off the thoroughfare, the émigré involuntarily gave off a huge EMP . This set ablaze and demolished most large metallic objects. Ally Fitzgerald’s approaching Cobra was destroyed, killing her. John Stark narrowly survived the destruction of his Murciélago, rolling out at the last second.

At this point Director Zero and Dr. Alibekov sent a medical diagram to Mr. Stark’s GF phone. It showed the ballistic angle to execute Voydan while destroying his implants.

Stark got close enough. Recovering his lucidity, Voydan corrected the orientation of Stark’s pistol so the bullet would indeed destroy his brain disc. John then pulled the trigger.

Janos Voydan’s and the Global Frequency’s actions did save San Francisco. The nuclear bomb was set loose, but without Voydan’s wormhole it didn’t travel. It fell and exploded in its remote bunker, without casualties.

John Stark appears in the twelfth and final issue of Global Frequency, “Harpoon”. However, the story logically has to happen before the one in issue #2, since at least one KIA agent shows up. Whether it happens before or after “Bombhead” is impossible to say.

During this op, Stark headed a kill team that stormed a secret military installation in a Chicago office building. One half of the fire team was lost to a mined corridor, but the other half could make entry. However, all they found were rotting corpses and destroyed equipment – the soldiers within had already terminated their facility.

During this op, John wielded what looked like a MP5A3 submachinegun. He and Global Frequency agent Alice April seemed to share an attraction, but it may simply have been adrenaline.

A handsome, clean-cut African-American bloke. He seemed to be about 30.

A calm, quietly competent professional. John does zero dick-waving and is the opposite of a cowboy.

If his background comes up, he’ll simply say that he used to be a soldier.

I suspect that Stark’s Weaponry score is 05, but we don’t see him do much shooting. 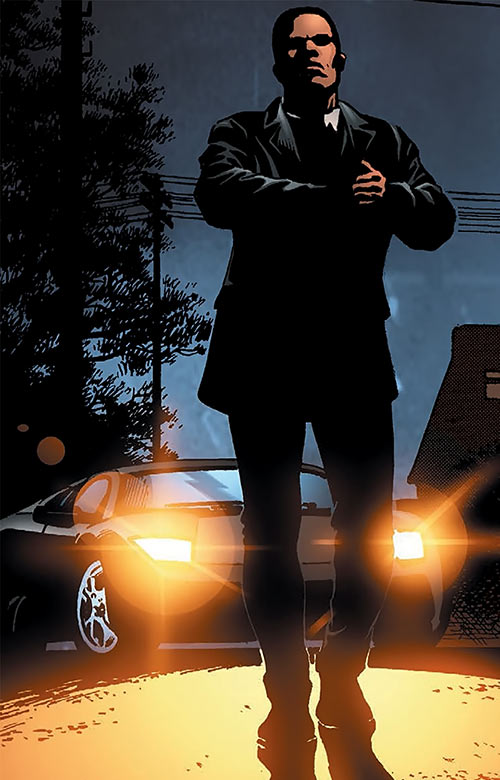 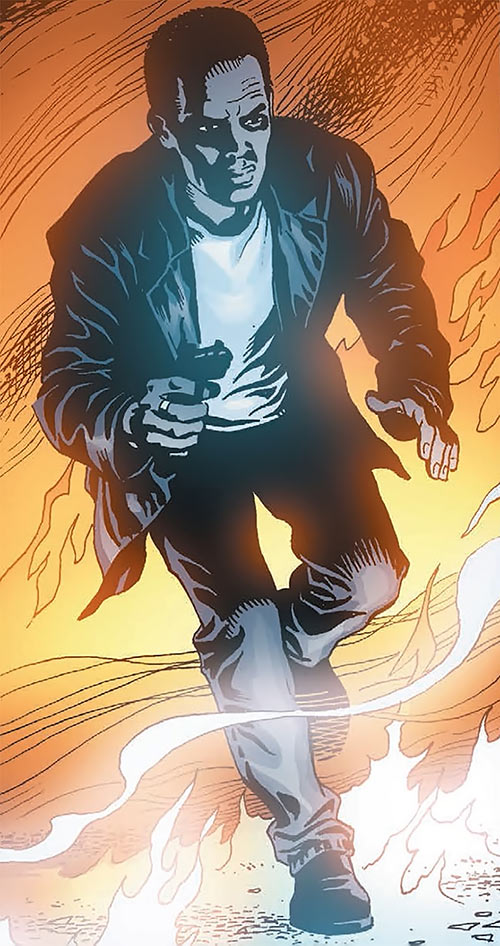