Glorian can manipulate reality for a short time. This a very powerful illusion he can create. For his subject and the people around him, everything is real. This “dream” is almost always based on his subject’s fantasies or wishes.

Still, the matter actually appears restructured. Those lost within Glorian’s work *can* climb up on illusionary stairs, cross illusionary bridges, or pass through buildings that exist in the real world but not the illusion. If someone could resist Glorian, what they would witness would probably be very odd, with people ignoring matter and physical laws.

This level of psionic  power is allegedly possessed by all human beings in the Marvel Universe, albeit in a latent state. This was also demonstrated by Rick Jones when he paralyzed an entire space fleet.

Billionaire Gregory Gideon was in his jet with his family when he was caught in the blast of a Russian nuclear test. His wife was killed in the crash, and he and his son were condemned by the radiation.

However, the stubborn Gideon used his remaining months to conceive a plan to save his sons. It was based on using the corpses of the Fantastic Four to extract their DNA, and devise a cure using it. Gideon was killed when the Dragon Man, his tool for killing the heroes, broke free of his control.

However, the alien Shaper of World was in the vicinity. He had been attracted by the dreams of one of Gideon’s henchmen. While the man was not suitable for his goal, the Shaper noticed Thomas Gideon and decided to take him as an apprentice. Thus, the Shaper cured Thomas and empowered him to manipulate reality.

Glorian is young and enthusiastic. For him the universe is full of wonders, and he can fulfil dreams. His life is a quest for grandiose and interesting dreams, and he has lived many positive experiences. This can get annoying for cynical and bitter people.

Glorian is great for these one-of-a-kind scenarios, probably with one GM and one player, heavily emphasising role-playing. Glorian stumbles by (wherever in the multiverse your characters may be, that doesn’t matter) and is interested in the dream of one character.

Time to warp the reality in some interesting ways and see how everyone react… after all, Glorian will clearly state that he’s going to fulfil the character’s greatest dream.

Advantages:
Glorian may now have reached the Scholar (dreamshaping) advantage, but I doubt it. 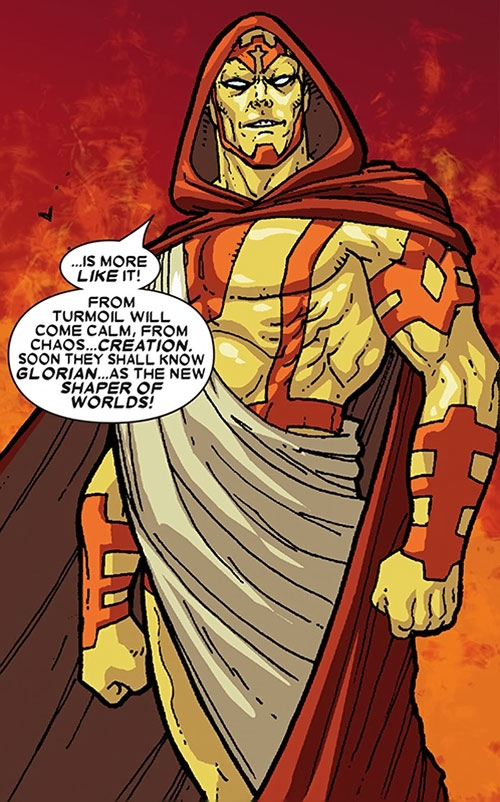