Gog is superhumanly large and strong, and has bionic eyes.

He’s a competent and disciplined soldier, who can routinely heft and use heavy weaponry.

He used to be a cook. Albeit an Army one.

Owen Llewelyn was a Welsh everyman from Llareggub, complete with a little moustache and semi-long hair. He played soccer, was married with children and was content with his job as a military cook.

(“Llaregub” is a reference to an old BBC Wales radio drama, where it was the archetypal small Welsh village. And yes, it’s “bugger all” backward.)

It all went to Hell during the Falklands wars. The troopship Llewelyn was in, waiting for authorization to disembark, was hit by an Argentinean shell. All aboard were either killed or pretty much dead.

All men were declared KIA and the comatose bodies brought back to Britain. From there they were transferred to the corporation ECE — a regular contractor for the British military — and kept in suspended animation. Over the years ECE ran experiments using the mangled comatose bodies of the Welsh squaddies, trying to come up with cheap super-soldiers.

They did not use the cutting-edge tech deployed for super-soldiers like Hauer, Dalton or Childs. The goal was to keep costs down.

The troopers became giant cyborg warriors, remote-controlled via a computer interface. Their consciousness was buried underneath, making them little better than robots. The Welsh Super-Squaddies were deployed several times in undocumented operations. One suspects those were chiefly jobs to protect ECE’s interests.

One such op took place when ECE located British super-soldiers Hauer and Dalton in Cambodia. The Super-Squaddies were airdropped in and went on to kill everyone in the drop zone, despite the presence of journalist Sarah Wilde.

The Super-Squaddies were defeated by Hauer, Dalton and USAgent (John Walker). The only surviving Welsh trooper was Llewelyn, code-named Gog.

(In a Welsh context, “Gog” is often short for “Gogleddwr” (“Northerner”), a person from Northern Wales. This might be the origin of the code-name, rather than a Biblical reference.)

Gog’s conditioning was broken by Dalton’s telepathic abilities. This allowed Owen to recover his free will and all of his memories up to the point where he had been turned a computer-controlled flesh robot. Llewelyn sided with the Super-Soldiers and Wilde.

Once he was done helping Owen tried to return home. This was a dismal experience. Unemployment was rampant, his wife (who had been told he was dead) had remarried, and his kids were in trouble with the law for twocking  and joyriding. Being now a ghastly-looking giant, he found it nearly impossible to fit back in.

The ex-squaddie thus chose to work for the Super-Soldiers. First for the government, then after privatisation for the Mercy corporation. He hoped to make enough money to allow his kids to move to another part of the UK. One where there were jobs to be found, and the police didn’t know about them.

Gog is a nice, neighbourly guy with a simple, everyday personality.

He’s smarter and more observant than he looks, and enjoyed discussing with Wilde.

His main goal is to do his job while sending money to his kids.

Equipment:
Gog is almost always equipped with a BFG – either : 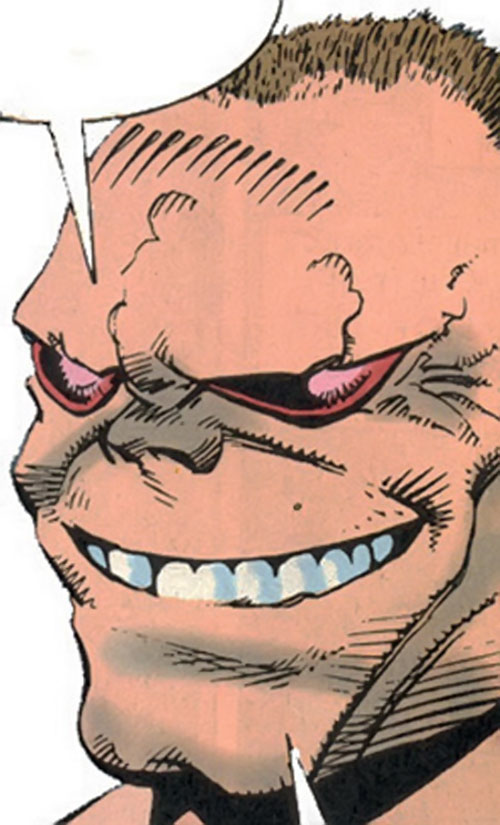