Goldberg has the ability to withstand many forms of damage. His body takes on more of a golden appearance befitting his name the more he does so. If he is ready, he can psych himself to take greater amounts of kinetic damage then even his superhuman body would seem to be capable.

Once he feels that he has his opponent in a position where they are vulnerable (stunned or surprised), he will often make a leaping charge attack (the “Spear”). During this maneuver he’ll ignore any addition to his kinetic absorption in order to gain more damage against his target.

All of Bill Goldberg’s life, he strived for one thing, to play professional football. He trained intensely. He even became an expert in Judo & Jujitsu, in order to prepare his body for the task. He played with a trademark intensity, winning all-city and all-state honors in high school before accepting a scholarship to play for the Georgia Bulldogs .

After being honored as one of the university’s best defensive players, he graduated and was drafted by the NFL’s L.A. Rams .

He had reached his dream, only to have it unfortunately taken from him as he pushed his body to far, too quickly. Injuries stacked upon one another, and he was cut twice from the team.

Bill would not give up and his status within the NFL allowed him to be drafted in its newly formed experimental World League of American Football. His intensity was enough to take the Sacramento Surge  to the championship, allowing him another shot in the NFL. He then returned to Georgia to play for the Atlanta Falcons .

After two years, a torn abdomen sidelined him yet again. Little did he know that it was brief bursts of super power that lead to his injuries, as his body had not yet learned to withstand it’s own budding super strength.

It was in playing for the Falcons that he drew the attention of both Kevin Sullivan and Atlanta businessman Eric Bischoff. Bischoff saw in Goldberg the chance to finally upstage his rival businessmen. And Sullivan saw yet another recruit for his “Varsity Club,” a criminal team of disgraced, super-powered ex-sport stars.

Bischoff reached Goldberg first. He found in him a heroic personality and a highly marketable image close to that of the popular vigilante Stone Cold Steve Austin. Bischoff had previously tried to scout Austin, but Stone Cold allied himself with a rival.)

Eric promised Bill that he could help him reach his full potential, make tons of money, and never have to worry about injuries again. He would just be a spokesperson for Bischoff’s heroic “WCW-World Crisis Watch” (a front for his “Power Plant” training facility.)

Bill accepted reluctantly, since his injury had kept him from joining the Carolina Panthers  in the NFL’s expansion draft. Sullivan waited in the wings, biding his time…

The Power Plant turned out to be a facility to rival the famous Hart Dungeon. It did indeed bring out Goldberg’s potential, as the rest of his powers surfaced in short order. Bischoff decided to rush Bill out to the public. Needing someone to test his prodigy, he sent Bill after the jumbo jester Hugh Morrus. After a decent workout, Goldberg was victorious.

Bischoff wanted more hype for “The Phenom,”. He went out and bought it whenever possible. Whether it was sponsoring a racing team, licensing toys, sport cards, etc, you name it, it had Goldberg written all over it.

Unfortunately, Eric was beginning to run low on money, and the Power Plant was nearing shut-down. The mob-connected “Gold Club” strip joint in Atlanta agreed to “lend help” if Eric would supply them with bodyguards and keep Goldberg away from their business.

Now enter Kevin Sullivan with a plan guaranteed to attract Bischoff. Kevin had been following Goldberg’s career and now realized Bill was too true-hearted to ever work in the “Varsity Club,”.

However, for a price and a percentage of the Power Plant, Sullivan would supply makeshift “villains” to lose to Goldberg in public. This would further enhance Bill’s reputation and keep him away from any real criminal targets.

As the WCW’s heroic champion, Goldberg took out names such as Wrath, Lash LeRoux, Disco Inferno, and the Maestro, along with many other one-trick opponents. It was often done in a matter of seconds, as they had been paid to fall and keep quiet. The formula worked, and Goldberg became a near household name.

Bill and his brother even collaborated on a biography of the Phenom entitled I’m Next ! the Story of America’s Most Unlikely New Superhero.

The con wears out

Unfortunately, Bischoff’s and Sullivan’s spin doctors had done their job too well. Other super powered beings like Tank Abbot and Bam Bam Bigelow later came after Bill, wanting to take him and his image down.

Around this time, Bischoff’s mob contacts became more demanding, forcing him to work more closely with one of their bookies named Vince Russo. Russo had numerous grudges, and unlike Bischoff, wasn’t satisfied simply with the marketing dollars coming in by Goldberg’s media sensation.

He wanted Bill to go after over 130 of his own personal enemies, including mob enforcers Scott Hall and Kevin Nash, or Bill would be fired. Hall and Nash did not go down easily like the others Bill fought, and they handed him his first public defeat.

Russo ran off, the deal with the mob was broken, and Bischoff was in serious trouble. Bill finally did some investigating, and found out about everything Bischoff, Russo, and the others had done. As payback, he left Bischoff to fend for himself against the mob. Goldberg only made public appearances to legally fulfill his contract obligations.

A rival businessman finally managed to buy out the Power Plant and it’s front, the WCW. Bill decided to confront the new owner regarding the money owed him on his contract. This happened while the man gloated over the destruction site of the WCW office building. Goldberg arrived just in time to see the unconscious Owen Hart thrown from the site to his death.

Fed up with all the crime and corruption, Bill speared through a building support, bringing the place down. Unbeknownst to Bill, a falling girder took out Owen’s brother Bret, (who had defeated his and Owen’s attackers). This ruined Hart’s shot at the corrupt businessman responsible for his brother’s death, by allowing the man to escape.

The media got a hold of the story the next day. It was reported that Goldberg, in completion of his WCW contract, aided his former employers in the demolition of their offices, single-handedly took down Owen’s killers, and saved the life of a well-known businessman. The Goldberg media blitz continues, in spite of himself…

A large, solidly built man with the overdeveloped shoulders, neck and strong thighs of an NFL lineman.

He is bald, but hairy chested, and sports a closely trimmed goatee sometimes hidden on his occasionally unshaven face.

He typically wears only solid black trunks, short boots, and fingerless gloves, along with elbow and knee pads, when in action.

Goldberg’s public persona is pleasant enough in interviews. He genuinely seeming to care about innocents and his fans, though he seems to be slightly ill at ease with the attention at times.

In action, however, he is ferocious, intense, and intimidating. Roaring and spitting, he spears through anyone in his way.

Could easily have Bill’s agent use the same marketing tactics in a publicity war over commercial sponsorship (and the gold motif) with Booster Gold, leading to a confrontation between the two.

He could perhaps be a target of the villain Goldface, or just about any glory-seeking bad guy. 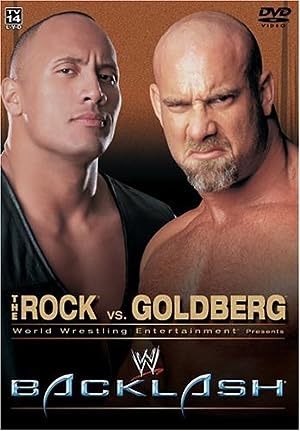 The Rock vs. Goldberg 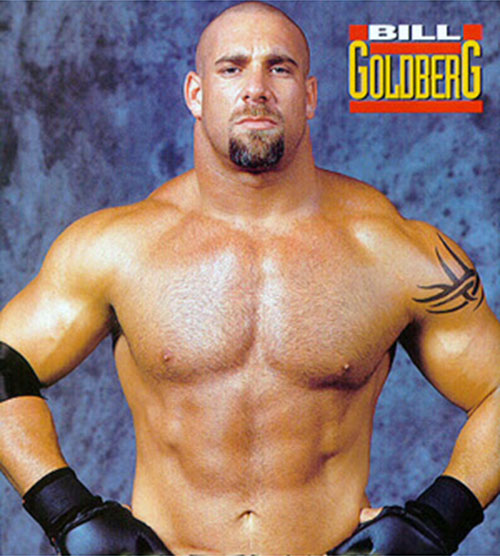 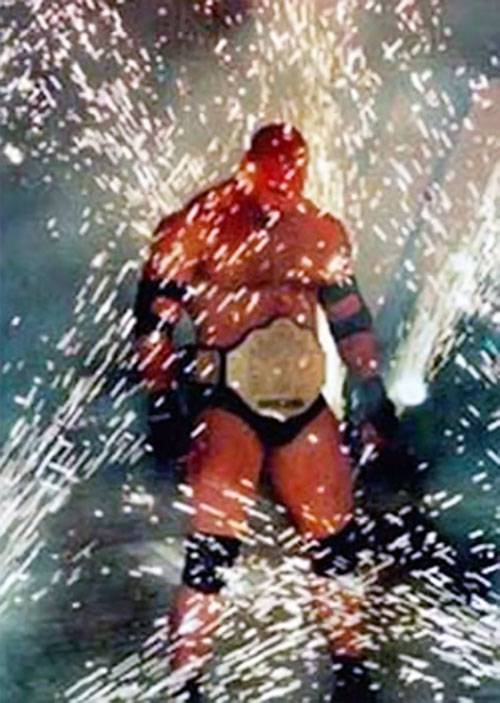