Golddigger is generally assumed to be a martial artist – possibly a wrestler.

During an early appearance, Golddigger produces a pair of fighting daggers, apparently of a Sykes-Fairbairn design.

In her 2011 appearance she was armed with a modern handgun.

Angela Golden is gorgeous, and dresses to emphasis her spectacular body. Her presence has proven very distracting for most males. Furthermore, she has the social and manipulative skills to capitalise on this.

Her pulchritude also makes it trivial for her to pass for a random moll, bimbo or escort among a criminal’s encourage. This allows the shrewd Golden to deceive and surprise her employer’s foes.

Close observation suggests that she may have other assets. While Golden is a trained hand-to-hand fighter, her skill is not such that it would make her employable as a costumed fighting specialist. However…

However, Diamondback (Rachel Leighton) is surprised by Golddigger’s strength, which seems to at least match her own. And Diamondback has by that point near-superhuman strength, sufficient to snap through thick leather restraints.

If we interpret this scene as Golddigger having abnormal strength, she seems slightly stronger than Diamondback. Rachel being pegged a low 05 (in DC Heroes RPG terms, and thus able to lift about 800 lbs) that would put Golddigger somewhere near the 1,000 lbs strength mark.

One hypothesis would be that Golddigger is a marginal success of the Power Broker process, which left her with just-superhuman strength.

Her durability is normal though. She can readily be knocked out by a sufficiently strong fighter, or an athletic person clubbing her with a bar stool.

Angela Golden might be from New Orleans. She seemed very familiar with the city and its underworld, and it is weakly implied that she has the accent.

The Golddigger identity and costume were first seen used by another woman, the assassin also known as Caprice. Caprice used the Golddigger disguise to infiltrate the Unlimited Wrestling Federation and assassinate Titania (Davida DeVito).

Whether the Golddigger identity was created by Caprice is unknown. Occam’s Razor  would suggest that Angela Golden — possibly a Power Broker customer — had already created the Golddigger name and costume to work as a mercenary. If so, Caprice stole her identity to apply and join the Wrestling Federation.

Golddigger was later glimpsed as a guest to the all-women luxury cruise thrown by Superia (Deirdre Wentworth) to pitch her Femizon project.

Some months later she was spotted at a Bar With No Name. She had apparently been sharing drinks with two other super-villainesses, Battleaxe and Steel Wind. Then, they noticed Black Mamba and Asp at the bar.

They tried to seize them to earn a bounty from Superia – but thanks to yet another super-mercenary named Impala, their prey escaped.

During the early 1990s, Golddigger completely changed her style. She adopted a new hair style, hair colour and low-key but flattering costume. Far more eye-catching than before, Golddigger now worked as a sort of lieutenant for wealthy criminals rather than hang around with knives in criminal dives.

If she is indeed from New Orleans, this new job may have been provided by the crime lord Damon Dran, better known as the Indestructible Man. Dran looking for local talents as he established his new headquarters in the Big Easy. Golddigger seemed in charge of security, running a crew of extremely strong henchmen. Kono “the Sumo” Sanada was her main enforcer.

Golden was warned by her contacts that two persons had been in town enquiring about Sanada’s sister. Thus, she drew them into a trap – an armoured limousine rigged with sleep gas dispensers. One of her two captives, Rachel Leighton, kicked Golddigger’s gas mask out of her hands and punched her out. But Leighton couldn’t escape and eventually fell to the gas.

Nevertheless Leighton soon escaped, punching Golddigger out a second time. Rachel left Angela trapped in the cage that previously held her and her ally Zach Moonhunter.

When Captain America (Steve Rogers) later sneaked into Dran’s mansion, Golden was the first person he saw. She played the damsel in distress long enough to get close to Cap, then kneed him in the groin and had her team of heavies come in to finish him. However, Cap recovered from Golden’s attack, and dispersed her security team.

Yet another costumed operator, Americop, then attacked Dran’s HQ. That made the situation untenable, and Golden retreated to join Dran in his getaway helicopter. Americop destroyed the helicopter with a grenade launcher, but Golddigger survived. She likely jumped from the rope ladder under the helo when she saw Americop aiming his weapon.

Angela Golden — no longer using the Golddigger alias — resurfaced in the late 2000s. She now was an agent of the Power Broker, working for Doctor Malus. Malus bought the work of one Dr. Seth Forrest, intending to turn it into a cheap way to create superhumans.

Golden apparently worked both as a face and as muscle. She was promised access to the treatment as part of her compensation. To fool investors, Golden sold them that the project was backed by Captain America and Iron Man (Tony Stark). She said that it was a Stark-designed variant of Cap’s super-soldier serum.

Though she was Malus’ lieutenant, he and Forrest kept Golden in the dark as much as possible. The treatment she was given was but a placebo, though for a while she feared that she had fallen victim to the disfiguring effects of the process. The project was dismantled by Hawkeye (Clint Barton) and a number of renegade test subjects.

Fed up with her employers’ lack of loyalty toward her, Angela Golden showed little reluctance to share information and likely obtained a plea bargain.

In her old Golddigger identity, Golden has short black hair. Presumably her blonde hair is a high-end bleach job, or a wig.

The vest she wears is spangly lamé.

In her more recent appearances she was wearing ordinary business attire and casual clothes.

On the other hand, she did not endure stress and pain too well.

When Black Mamba uses one of her phantoms against Golddigger, it shows an image of Mamba. My sense is that it was an artistic mistake from a guest artist. But you could also conclude that Golden was sweet on Mamba.

Equipment:
Golddigger used to carry a pair of fighting daggers [BODY 05, Enhance (EV): 01 (Cap is 06), Descriptor: Piercing, Slashing], but no longer seems armed. She’s often accompanied by muscle, though, and had a cutting edge cell phone. She occasionally carries a medium-calibre pistol. 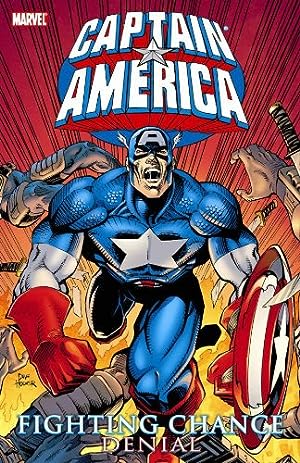 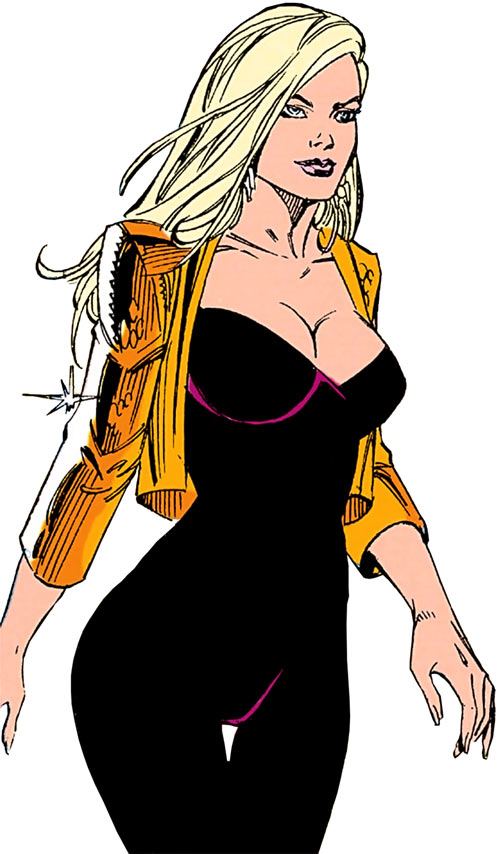 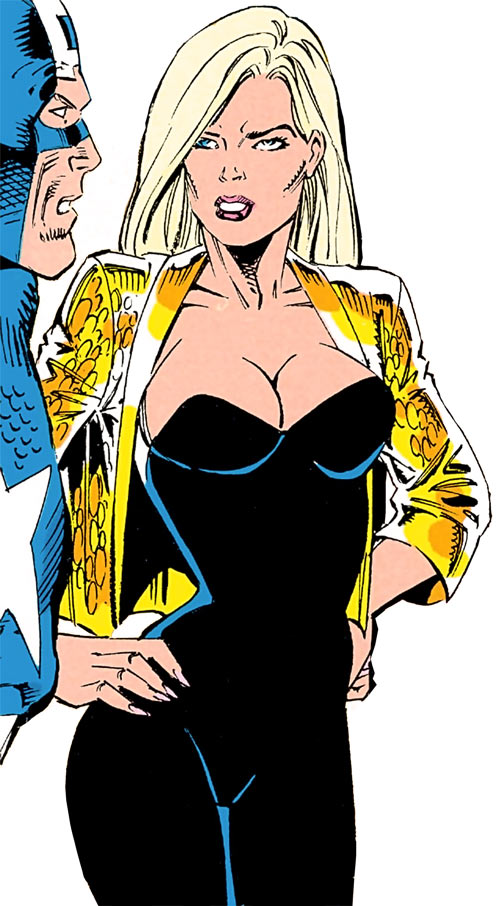