Golden Boy has been enhanced using drugs and medical procedures. The result was “Class 50” superhuman strength and superhuman durability.

He has solid hand-to-hand combat training.

Golden Boy was the name of the kid sidekick who was sent to fight alongside Titan. This was solely a marketing and PR move. The goal was to reinforce the public’s trust toward Titan after he had been established as a hero.

Of course, the kid was completely out of his depth. Furthermore, he had no chemistry with Titan. During his first solo mission, the sidekick was captured, kidnapped and lost an eye. This was a complete failure.

As a consequence, Grace retired him. She had one of her men, Madison, telepathically destroy the confidential information within Golden Boy’s mind. This allowed the kid to be returned to civilian life.

Years later, the former Golden Boy ended up with an apocalyptic mutant cult called the Inhibitors. They were led by a gifted biologist, professor Kirby. Kirby was bioengineering superhumans and convincing them of their superiority. His plans involved invading Golden City.

Kirby recruited Golden Boy, who at that time, had begun to lose the conditioning done by Madison. The young man thus started remembering classified information. As they prepared, Kirby enhanced Golden Boy to superhuman levels.

However, the government detected Kirby and his plot. They sent Titans as well as a large SWAT team against him. Titan broke Golden Boy’s hand and leg during the fight.

Golden Boy was later coldly executed by a National Security Council executive. With the fading blocks, he knew too much about Titan to be allowed to live.

Golden Boy is a young punk with a burning hatred for Titan.

Bonuses and Limitations:
Density increase is Always On (-1) and already factored in.

A boy and his dog

Rex is the Inhibitor’s “dog”, and obey Golden Boy’s commands. He looks just like the usual werewolf in Crinos form . 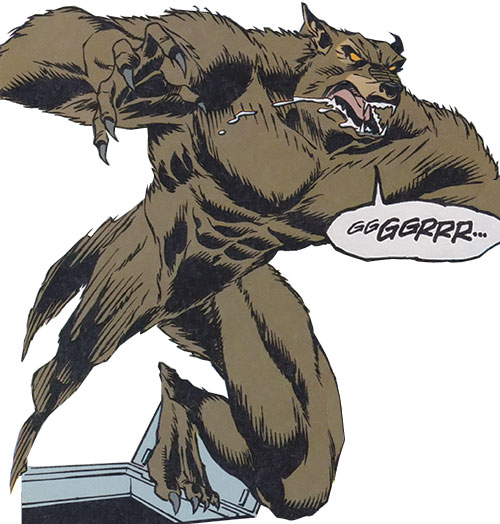