Golden Boy is a notable, but has-been player in the novels. He’s one of Walter Jon Williams’ characters.

Jack “Golden Boy” Braun is one of the strongest men in the Wild Cards world. He generates a golden glow/force field around his body that makes him nearly invulnerable.

He’s greatly feared in combat, and has been known to routinely destroy entire tank columns.

Braun was a struggling German-American from the Midwest. He enlisted in the Army during World War II immediately after graduation, in 1942, and was a good soldier.

He fought in Italy with the Fifth Division, received a Bronze Star and three Purple Hearts, and left the Army a master sergeant. During his service, he met Milton Aronowitz.

After the war, he started to have struggling actor jobs. These were mostly obtained through Aronowitz, whose father was a theatrical producer.

But the Wild Card Day came and he was changed. Braun was recruited in the seminal “super-hero” team, the Four Aces. Braun was still a good soldier, doing what he was told to do by the team’s founder, Archibald Holmes.

Braun later managed to break into movies with a vaguely autobiographical MGM movie titled Golden Boy. He was a typical Hollywood star of the 1950s.

However, when the House Committee on Un-American Activities  investigated the Four Aces, Braun broke down. He told everything about the others, and the group and most of its members were destroyed. He carried on his acting career.

Feeling guilty, he went back to being a soldier. He was monstrously effective in Korea along with the US Army – earning the rank of lieutenant-colonel and pretty much single-handedly securing the Pusan sector .

However, Braun was a mediocre actor and his movie career slowly slid down into obscurity. His last role was that of Tarzan in a TV serial remake in the early 1960s. Still, he managed some wise real estates investments and became an idle rich.

He still felt like a Judas, and most older Aces, such as Tachyon, distrusted him.

In late 1986 Golden Boy joined a group of American aces on a world tour. Braun ended up working with Dr. Tachyon to retrieve Tachyon’s newly-discovered grandson from a group of Parisian terrorists. In the process they came to a mutual understanding and even the beginnings of a tentative friendship.

The events of the world tour encouraged Golden Boy to work on making a difference again. He went to work for Senator Gregg Hartmann’s campaign for President. Braun became the leader of Hartmann’s California delegation at the Democratic Presidential nomination convention.

As a result, he found himself caught up in the intrigues of surrounding the senator. Braun barely survived battles with Ace assassins Mackie the Knife and Demise.

He went through even more personal turmoil when he ran into fellow conventioneer Josh Davidson, a.k.a. David Harstein of the Four Aces. Harstein had taken up a new identity in the wake of the HUAC trials to escape further grief at the hands of the government.

Near the end of the convention, Golden Boy finally learned to his dismay that Hartmann was a homicidal thrill-killer Ace. He had used his secret empathic powers to induce violence in others and vicariously delight in the emotional aftermath.

Thanks to the efforts of Dr. Tachyon and others, Hartmann was stopped without the senator’s Ace nature becoming public knowledge and inciting a hate-crime backlash against all Wild Carders.

Braun hasn’t been openly engaged in politics since. He likely was disheartened that he almost helped put a monster in the White House. He did make himself available to the Army during its attack on the Rox during the Jumper crisis in the early ’90s.

Braun is a tall, well-built blond German-American from the Midwest. He’s very good looking, and seems about 25. There is a palpable golden glow around him.

In lapidary terms, Braun is now a womanizing, hard-drinking (yet charming) playboy. He hasn’t got the balls to face what he did decades ago. He just wallows in luxury.

More understanding observers will note that Braun has physical bravery to spare (and did even before the Wild Card provided him its gifts), but that his will is weak. This is most prominent when he is confronted by authority figures.

During his years as one of the Four Aces he had a tendency to forget that he earned his fame with his actions rather than having it given to him by the people who managed him. He’s particularly prone to impulsive behavior and has indulged in womanizing his whole adult life, even during his marriage.

Braun tends to deal with stressful situations by retreating into a bottle in the short term or into seclusion in the long term. From there he hopes the problem will blow over.

Thus, he wallowed in the luxury of his California mansion for the better part of four decades after the HUAC trials with occasional forays into battle during emergencies such as the Swarm attack.

It wasn’t until the late 1980s that he emerged into public life again and began facing up to what he had done during the trials. He tried to make amends by doing good in the here and now, which met limited success during the UN-sponsored world tour and almost blew up in his face during the Hartmann run for presidential nominee.

Whether that latter failure sent him back into complete retirement or if he’s simply found less obtrusive ways to continue trying to serve the public is unknown.

“You can’t change the past… You can maybe make the future a little better.”

“Think twice before you start naming names. I didn’t. I’m still paying for it.”

In the DCU, Braun would have been a part of the All-Star Squadron, yet able to fight in Europe. He would have fought along with Easy Company, but would have been involved in a terrible way with the death of Sergeant Rock, which he feels is his fault.

Golden Boy had a short movie career, but is mostly an has been, his will crushed by the conviction that he killed an American wartime legend.

The JSA were forced into retirement by the same House Committee on Un-American Activities that destroyed the Four Aces in the WC universe. So I think the obvious link there would be to have the Four Aces be a subgroup of the JSA and Golden Boy’s actions are part of what forces the JSA into retirement.

Connections:
Tachyon (Low – only after the world tour). 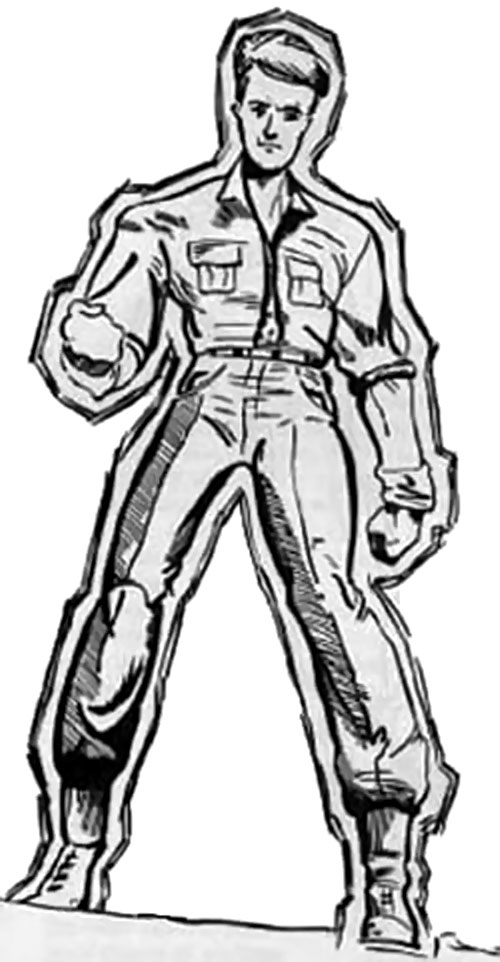 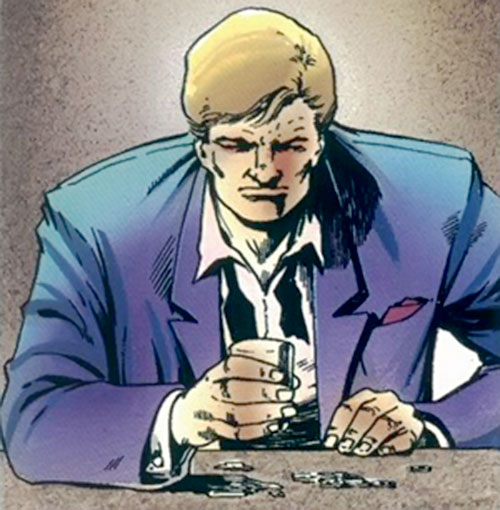