Golden Eagle’s superhuman powers were all properties of his winged, armoured costume. It gave him enhanced durability and allowed him to fly to great heights at high speeds. His gauntlets’ talons were formidable slashing weapons, and his helmet lenses gave him telescopic vision.

The origin of Golden Eagle’s costume is unknown. Parker never displayed the sort of scientific expertise that would have been necessary to construct it.

Without the suit, he was merely an athletic young man with moderate skill at unarmed combat.

Charley Parker, alias Golden Eagle, was a Midway City orphan teen. He hero-worshipped Hawkman, to the point of dressing like him.

When the villainous Matter Master commanded his “mentachem” wand to find Hawkman (not knowing Hawkman was in space), the wand decided to manufacture a reasonable facsimile. Thus, it transformed the suitably clad Parker into a pseudo-Hawkman by turning his makeshift costume into one capable of flight.

Embarking on a crimefighting career as the Golden Eagle, Parker was rescued from the Matter Master by the JLA.

Golden Eagle was one of many characters retroactively deleted from DC continuity by the Crisis on Infinite Earths. But that decision was later reversed. Therefore, he reappeared with an impressive new costume (a George Pérez original) and a new background as a would-be hero-for-hire.

During his first case, he saved a family of campers during a forest fire. However his “no applause, just throw cash” attitude and his distribution of Golden Eagle business cards rapidly deflated his image. The ne’er-do-well surfer dude still helped found Titans West, but TW had been short-lived.

Parker became an occasional New Titans reservist. He also participated in the brief Titans West reunion while sponging off Mal and Bumblebee in California.

Golden Eagle’s retconned  rebirth was brief, though. He was murdered by an agent of the Wildebeest Society during their ongoing campaign to capture the past and present members of the Titans.

A laid back beach bum (and not even a native Californian), Charley was always short on brains and cash. Although he had numerous hare-brained ideas for cash-making, he couldn’t hold a steady job, drifting from pumping gas to seeping up to working in fried chicken restaurants.

Although he was only out to make a buck, the Golden Eagle was a brave young man. However he engaged in small talk during emergencies, which could be distracting to his team mates.

Compiled by Sébastien Andrivet (using the Titans Sourcebook, Who’s Who and large amounts of cut/paste from Keeffee.com/titans/alien.html (defunct). 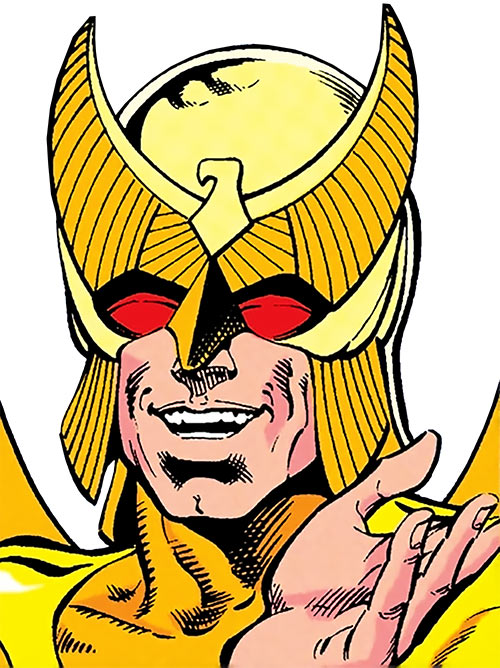 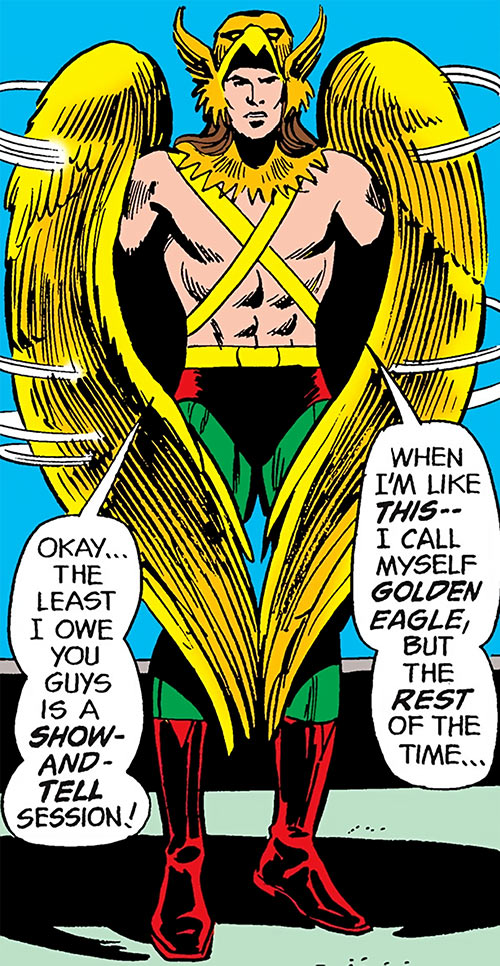 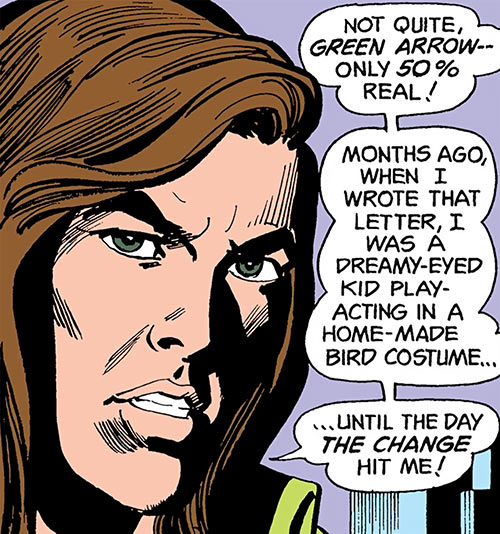