She can, like, fly. Oh, and birds will do what she wants. That’s about it, really.

She commanded a small group of falcons to hold Hawkman (by his wings) while she went off to plunder.

She appeared in “She’s No Angel”, a Hostess Fruit Pie ad featuring Hawkman, which appeared in Brave and the Bold #167 (and probably elsewhere too).

As Hawkman admired a golden statue of a raven which “certainly adds class to Ravenswood Square”, falcons suddenly dive bomb him.They grab him, and pull him to a nearby parapet where the Golden Raven gloats before flying down to steal the statue.

Fortunately, Hawkman manages to throw some Fruit Pies down onto the statue (wonder where he was hiding the Pies…). The Pies “were so good they took my mind off my birds…and my hands off the statue.” That is, she neglects to keep her birds under her control, allowing Hawkman to swoop down and grab her.

“The courts will soon clip your wings, Golden Raven,” Hawkman tells her.

Gee, that’s a lot of history. Too bad modern comics rarely have as much plot as a single page ad used to.

Oh, and lest I forget, “You get a big delight in every bite of HOSTESS™ FRUIT PIES”.

She has short black hair and a golden costume. Her costume consists of a yellow sleeveless leotard, orange tights (no boots), and a cape which is yellow on the outside but orange on the inside. Her leotard also has a black collar which comes to a point at her cleavage, and extends as a black design in the shape of an over-sized tie down her yellow leotard, extending slightly below her waist.

Bonuses and Limitations:
All Animal powers only work on birds.

CIA (Hostess Fruit Pies) is worth 0 Hero Points on Earth-Hostess. 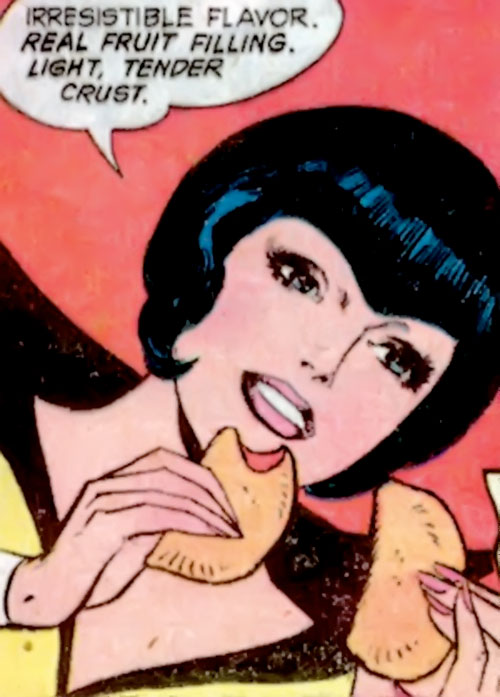