Goldigger has the sole ability to make himself intangible.

He also packs a funky futuristic pistol looks like a laser-gun, but fires HUGE bullets instead !

He appeared in “A Passion for Gold”, which was in Avengers #192, among other places.

Being the big brain he is, Mr. Fantastic realizes his dilemma. He sends his arm stretching over the city, “Instead, I’ll get my hand on something that will cause Goldigger to de-activate his intangible powers.”. His arm returns with Hostess™ Twinkies, which Goldigger turns tangible to eat.

Stretcho uses his elastic body to tie Goldigger to a street post, and the happy bad-guy excaims, “The Hostess Twinkies Cakes are worth it. They’re almost as great as you are.” Aww. Compliments from the Twinkies-stuffed Goldigger.

Goldigger is bald (Hostess must have been run by a bald guy – how many bald Hostess villains does this make ?), and wears a costume that sort of makes him look like the Vision without his cape – boots, gloves, belt, and the classic “1970s collar”.

No skullcap though, but he is gold from head-to-toe, even his skin.

Goldigger has a “taste for gold”. I don’t know if I should take this literally, and assume he EATS gold, or just assume he really LIKES gold. In the case of Twinkies, first he liked ’em, then he ate ’em. 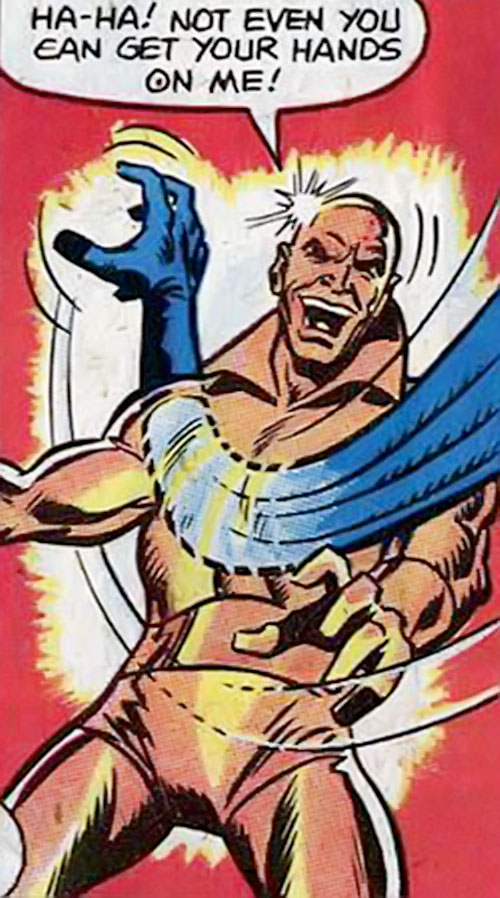