The Golem is a mystically-animated clay statue. As one might imagine, it is incredibly strong and very hard to damage in any meaningful way.

On a night in 1580, among the stars and mysteries of the sky, seated in his tower observatory, the learned alchemist Rabbi Loew read in the stars that misfortune threatened his people. Rushing through the night with his assistant Famulus, he went to speak to Rabbi Jehuda to discuss the danger. The two decided it was best to discuss the issue with the community elders.

“We can no longer neglect,” ran Holy Roman Emperor Rudolph II ’s decree, “the complaints of the people against the Jews. They despise the holy ceremonies of Christ. They endanger the lives and property of their fellow-men. They work black magic. We decree that all Jews shall be expelled from the city and all adjoining land before the end of the month.”

With little fanfare, the knight Florian was dispatched to bear the news to the ghetto.

Meanwhile, the Golem (an imitation of the Golem of Thessaly, which Loew had been working on, in case such an emergency arose) was incomplete. This giant, vaguely man-shaped lump of clay was hidden in a secret room beneath the rabbi’s home.

Knowing the time of need was fast approaching, Loew threw himself into the work, desperately trying to finish the monstrosity before it was too late.

Finally completed, Loew returned to his chambers barely in time to meet with Jehuda and Florian, delivering the news of expulsion. Loew, having worked before with the royal court, responded with a request for an audience with the Imperator, buying the time he needed.

And so, with Venus in the constellation of Libra, the time had come to bring the Golem forth. Loew attempted to move the thing, but, unable, recruited the heartier Famulus into the conspiracy. Together, they drag it into the main house.

Again, Loew is surprised by the appearance of Florian (and we find that the knight and Loew’s daughter Miriam have fallen in love). The knight had come to invite the rabbi to visit the Emperor at the upcoming Rose Festival.

In the meantime, with the Golem complete and armed with the key of Solomon, Loew and Famulus conjured the dead spirit Astaroth from the relative safety of a circle of fire. They forced the spirit to reveal the Word: AEMAET (some versions instead use AEHMET). With that, the spell ended, nearly killing both rabbi and assistant.

(This word, אמת in Hebrew, means “truth”. And “Ashtaroth” is the Biblical rendition of the ancient goddess Astarte , though it was inevitably reinterpreted as that of a demon — Ed.)

Unfazed, Loew quickly wrote down the activation word, placed the paper within a hollow clay star, and mounted the star on the Golem’s chest. This finally brought the Golem to life.

To test it, for the following few days, the rabbi has the Golem carry out household chores. This acclimated the residents of the ghetto to the thing’s appearance. Convinced that the Golem was working, Loew left for the festival to show his creation (and its power) to the Emperor.

Their appearance inspired terror at the court in all except the Emperor, himself, duly impressed. Eventually, the court warms to the creature, treating the figure (however skittishly) as a plaything.

With the Golem a hit, Loew was asked to produce yet more magic. The rabbi chose to show the history of his people, for which he would need complete silence, and stationing the Golem to guard the door.

The silence, of course, does not come. Thus, the spell shatters with an image of Moses attacking the hall with flashes of lightning. Chaos ensued as the court, trapped in the tumbling hall, turned upon each other for any hope of escape. Finally, the Emperor approaches Loew, offering to pardon the Jews under his rule, withdrawing his decree, in exchange for protection.

With salvation in his grasp, Loew commands the Golem to protect the people. The creature prevents the roof from caving in until the people can escape. The magician and his servant then return home, where the good news can be spread and celebration can begin.

With his people safe, the rabbi tries to deactivate the Golem. This is when he finds out that it had developed a self-preservation instinct. Books indicate that when Uranus enters the House of the Planets, Astaroth takes back his creatures. And the dead clay scorns its master and destroys him and all living things.

Meanwhile, the Schofar horn  is sounded the start to the Ceremony of Thanksgiving. Loew is prevented from destroying the Golem’s form by a summons from Rabbi Jehuda, himself, to the Synagogue. Loew rushes off, leaving Famulus to summon Miriam.

However, the assistant learns that Miriam and Florian have been having an affair the entire time. In his jealous fury, Famulus revives the Golem and set it after the Emperor’s knight.

The Golem (which seems to have acquired some of Famulus’s jealousy and Florian’s love for Miriam) attacks Florian. After a short chase and fight up the height of the house’s tower, he throws the knight to the street below, dead.

The truth will set you free

Apparently mad with love for the girl, now, the Golem grabs Miriam and runs off with her. Famulus’ ineffectual defense sets the rabbi’s home aflame. The fire begins to destroy everything within the ghetto. 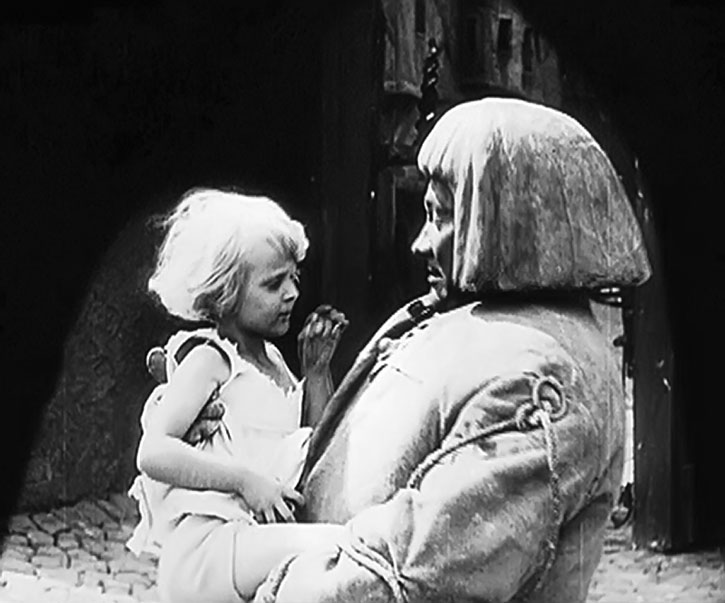 As the ghetto burns and Loew endeavors to save his home, the Golem begins to attempt to either rape or kill Miriam. But it suddenly stops, curious about another sound from outside the ghetto walls.

Moving to the gate, the Golem sees children playing without. Ever more curious, it breaks through the gate, terrifying all the children but one. This very young girl offers the thing her apple.

Somehow amused, the now-smiling giant hefts the girl up to his chest. As the two play, the girl runs her fingers across the clay, eventually coming to a stop on the star on the monster’s chest. Then she removes it. Lifeless now, the Golem drops the girl, and falls on his back.

Seeing now nothing to fear, even for the other children, the girl waves the crowd back. The children swarm the fallen monster, poking at it and feeling the clay. The star-talisman gets passed around and is eventually lost.

Eventually, Miram is found, and the people of the ghetto walk outside to find the lifeless form of the Golem, abandoned. The men carry the stiff clay form back within the walls for proper ceremony. Meanwhile, Loew himself praises G*d for the third salvation of his people that very day.

The Golem laid dormant until the XXth century. Its body was salvaged by an antique dealer from an old synagogue in Prague, and displayed in the dealer’s shop. There, it was recognized as the legendary Golem created by Rabbi Loew in the XVIth century.

He used the statue’s amulet to bring it to life and protect his daughter. But the Golem fell in love with the girl and threatened the life of her lover.

When the girl removed the star-charm from around the statue’s neck, the Golem returned to stone and smashed onto the cobbled street below, utterly destroyed.

The Golem is a clay statue of a man given life. His likeness seems vaguely similar (unintentionally, one imagines) to a heavy Charles Bronson with “helmet hair.” At the center of his chest is the star of Judah, in which talisman is the Activation Word which animates the body.

Well, none, really, except as a reflection of those around it. The Golem becomes calm, jealous, angry, and murderous when people interacting with it do.

When under the Loew’s control, the Golem follows the orders of either the rabbi or Famulus without anything resembling comment or issue. The sole exception is that the Golem backs away when it believes it is about to be deactivated.

Even when rebelling (or under the control of Astaroth, depending on your interpretation), the Golem keeps to simple motions and little more noise than an occasional grunt for emphasis.

He does, however, seem to have a soft spot for children. He was quite gentle with the small girl, despite the panic of the other children nearby.

No discussion of the Golem would be complete without mention of DC’s golem, the Ragman. As far as can be told by Ragman’s story, DC history deviates with the movie approximately midway through, with Loew’s Golem serving the ghetto until the Jews “grew uneasy at the idea of being defended by a monster,” as Who’s Who puts it.

The spell was recast on rags, rather than clay, creating a living costume to be worn by a chosen defender. At some point, the office became hereditary, and Jerzy Reganiewics was passed the suit by his father, shortly before the Second World War.

Jerzy tried unsuccessfully to defend the Warsaw Ghetto from the Nazi invasion of Poland, and emigrated to the United States, changing his name to Gerry Regan, father to Rory Regan, Gotham City’s Ragman.

If the spell used to animate Ragman’s costume is, indeed, Loew’s spell from the movie, then it is possible that, one day, Astaroth may stop by to claim Rory Regan’s spirit.

Anyway, Europe has few reasonable supers, and the past nearly as few. The Golem could, conceivably, have been reanimated (and protected from Astaroth’s influence) at various times and may have defended the Jews across Europe on and off for centuries.

Perhaps it sometimes replaced the Ragman when he was unavailable, and sometimes supplemented the man in the living costume. But he eventually returned to Prague in time to be purchased as a statue.

One assumes that, even if the 1914 film’s destruction of the thing were ignored, had it been in Europe at the time, the Golem would have surely been destroyed when the Axis Sphere of Influence was erected. Being magically animated, it surely would have been affected, but clearly would not have served the Nazis.

There are also some rather obvious parallels between the Golem and DC’s elementals, such as Swamp Thing (particularly the occasional arbitrary path of destruction). This may be the result of a similar protective force or magic. 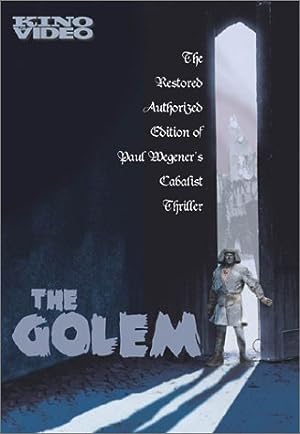 Der Golem or movie packs that include it 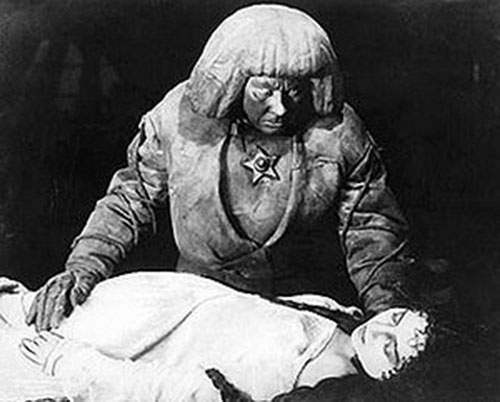 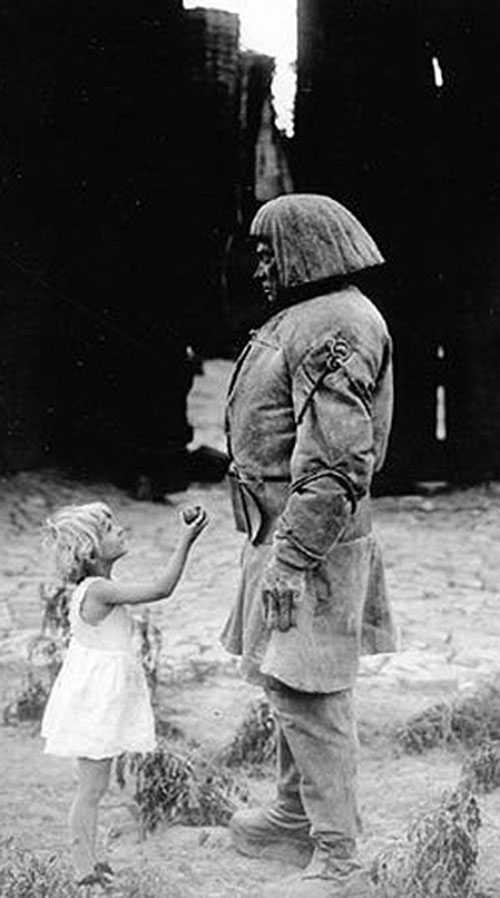 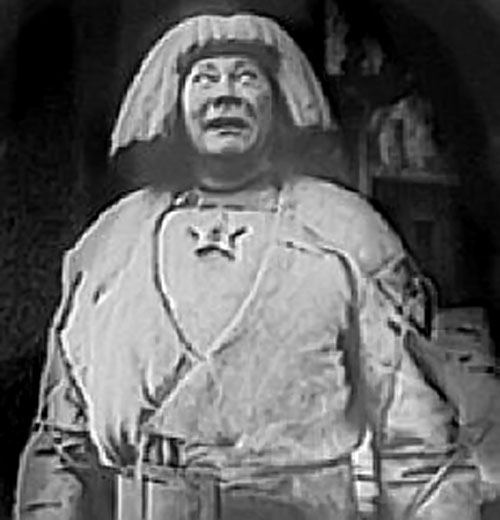 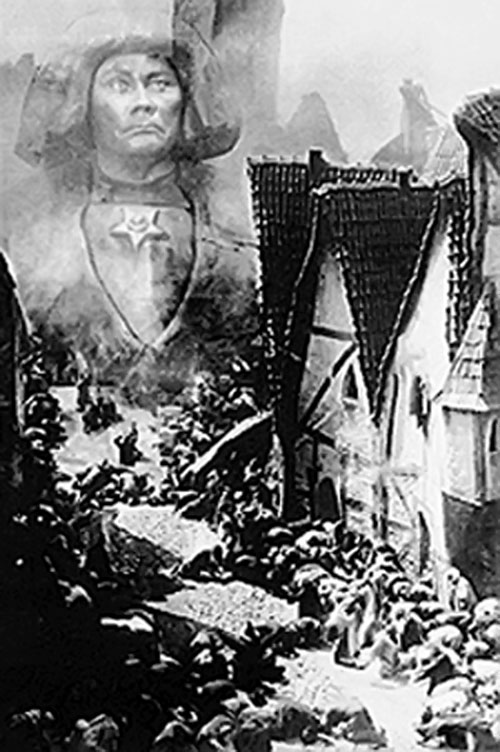