Goliath, as his name somewhat implies, can grow to depressing heights. At his maximum, he’s nearly unstoppable. His ionically-enhanced  metabolism is similar to Wonder Man’s. Thus he’s immune to most hostile environments, up to and including outer space, and effectively immortal. He does not sleep or eat, either.

Even at normal size, Goliath’s strength and durability are massively superhuman.

As Power Man I, remove all Powers and Advantages as the ionic powers are not that strong yet. As the Smuggler, further reduce his STR and BODY by 2 APs each.

Erik Josten is only slightly smarter than the average bear, and he knows it. Thus, he does not like to think for himself.

At this point of his career, this makes him a complete villain. His natural tendency and military thinking make him a perfect henchman, and since he’s the henchman of villainous employers such as the Enchantress, the Red Skull, the Mandarin, Count Nefaria and so on, he acts like a brutal thug.

His tendencies at acting like a bully and a braggart, which will considerably mellow out when he’ll be Atlas, are still very strong. He also has a violent hate of the Avengers.

The Thunderbolts are so deeply woven in the history of the MU… No inspiration right now.

Drawbacks:
MIA toward following orders, Misc : his eyes normally burn a bright yellow, but he can make them stop at will (1 pt). 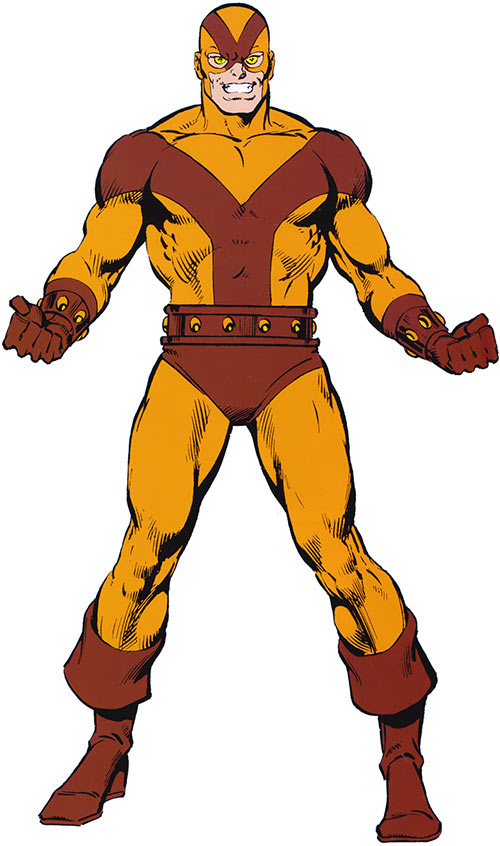