This specific character started as a creation for a campaign at home, then was redone for the Wild Hunt PBM project. There has since been one further iteration to make her more experienced and put more firmly into the DCU, then a general revision to make her even more distinctive and ambiguous.

Gom Jabbar’s sole power is the so-called “Integrity Factor”. Corpuscles within her body are constantly striving to maintain its integrity. These routinely destroys toxins, diseases, virus, ageing factors, lactic acids, etc.. Her muscular power and physiological stress resistance are the highest possible for a woman of her age and built.

Her reflexes, muscle tone and prowess are likewise very high. She cannot lose her physical fitness, only increase it. Any bit of exercise means long-term improvement. She cannot lose a iota of the gains even if she doesn’t exercise for long durations.

The Integrity Factor can heal wounds at a superhuman rate, including most normally fatal wounds. She has evidenced the ability to regrow fingers and to heal serious scars and burns without any trace. She believes she would be able to regrow entire organs and limbs within weeks. The Factor constantly strives to rebuild her body to a perfect state.

She was raised as a warrior, with direct access to Vandal Savage’s tutoring and vast arsenals. She’s extremely proficient with both the dagger and the assault rifle, the bow and the rocket launcher, the derringer and the halberd. Yet she doesn’t usually go armed, picking her weapons from fallen foes.

Her own fighting style is a combination of savate and jeet kune do, with lots of street fighting and escrima techniques thrown in. But she’s also a walking treasure trove of long-lost European weapon techniques.

Her fantastic reflexes also make her a top driver and pilot.

Gom Jabbar is the heroic identity of the Baronne Ingrid d’Annuranne, a young French aristocrat.

Her nom de guerre refers to the Bene Geserit “humanity test” in the novel Dune , since she considers herself a true woman and warrior.

Ingrid is the daughter of the superhuman menace Vandal Savage. Savage was born during prehistory and became a criminal mastermind and master of conspiracies. Her powers seem to be the product of Savage’s altered DNA. Her father, a misogynistic and aristocratic man, raised her in the tradition of the Celt women warriors , the warrior Bradamante  and the Amazons.

While born in 1973, she’s the daughter of a Cro-Magnon. She believes in values from another time – about one or two thousands year back, in fact. Her mother, a French aristocrat, was much more modern, but quite scheming and not as exalted as her husband. Ingrid feels contempt for her.

When she was married — against her will and by her mother — to a millionaire commoner, she refused to have sex with him, refused to live with him, kept her maiden name and took off with two Jean-Louis Scherrer suits , a toothbrush and 20 dollars. She went to the US on a luxury cruise, fleecing “rich imbeciles” at chemin de fer and baccarat all the while.

Home of the brave

Once in the Land of Opportunity, she went on a pilgrimage of sorts. Ingrid visited the places where her father had gained the most glory, and learned more about life. Appreciating the freedom she found, she decided she would live there for a while. Of course, she didn’t bother to inform any US official of that decision. Peasants.

For a few months, Gom Jabbar joined the unlikely band of heroes called the Wild Hunt. But there were tensions, things generally went south, and the group eventually split. The short relationship and bitter parting between Gom Jabbar and HappyJack didn’t help things in the least.

She then hit the road again, acting both as a criminal and a heroine. Her infrequent encounters with DCU costumed adventurers have been mostly transient for now. Nightwing once managed to arrest her, as she was busier making romantic advances than fighting him. But she easily escaped prison.

As a hobby, she also entered free form martial arts competitions and street racing. The DCU’s nascent female league in the UFC is the only media-covered outlet she gets, however, as K1 offers no such fights. The undercurrent of catfight and titillation Spike TV puts behind female league UFC fights frustrates her to no end.

She has entered a few illegal fights, but balks at the lack of public glory.

A beautiful, classy, muscular young woman who forever seems in her mid-20s. She exudes both haughtiness and sensuality. Her taste is razor-sharp. She chiefly dresses in haute couture – as of this writing she favours Dominique Sirop-selected dresses and tailleurs . Though she has been known to wear St. Laurent  men’s suit, complete with tie.

Since the entirety of her garde-robe would fill several semis, she tends to keep her clothes and jewelry for a few months, then give them to some random (and perplexed) charity. Hoarding is for the bourgeois.

Gom Jabbar never really had a costume. She just wears clothing suitable for the field and the current climate. Two constants are keeping her hair help in a simple queue, and a pair of red-tinted sunglasses that is surprisingly efficient at masking her features.

Ingrid is phenomenally arrogant. She’s aristocratic, domineering, snobbish and unbelievably self-confident. She sees most rules as beneath her, and that the world exists mostly for her enjoyment. She does whatever she wants, and says whatever she wishes – which is frequently insulting, as she loathes vulgarity and has a very broad definition of it.

She also becomes cranky if she cannot have the very best in whatever she desires. In many respects she is like a spoiled child who never came down from her infantile power trip.

Her lack of concern toward conventional morals and authorities means she frequently acts in a criminal fashion. If she feels the sheriff of a small town she’s passing through is an imbecile, she will have no qualm beating him up and his deputies, then taking off in a police cruiser while grabbing a few things at the station for her trouble.

She frequently acts as a mercenary for less than legal parties. Her tastes are horribly expensive, and she can’t stand not blowing money on frivolities. Thus, while she earns a fair lot of money, it is almost immediately burned on expensive clothes, high-quality restaurants, plush hotels, top massage parlours, exorbitant beautician bills, etc.

She is a warrior born and bred. She actually enjoys getting physical, even though her powers do not really blunt the pain. She craves danger — feeling it makes her truly alive — and the glory of battle. She will jump headlong in any foolish scheme, such as joining hot police chases for dangerous fleeing criminals by carjacking anything that looks fast enough to join the fun.

If she’s bored enough, walking at night in the roughest parts of Blüdhaven in high heels, a microskirt, an open business suit’s vest and a black lace bra seems like a good way to trigger some interesting action. As whoever she’ll end up putting in traction probably deserved it. Or not. That’s not the point anyway. Peasants.

She enjoys her career in competitive mixed martial arts. However, she hasn’t shot to the top due to her secret fear of being defeated on television, which her father might actually watch. Thus she pretends it’s just a hobby and she’s above crass competition. And she *has* to wear a mask anyway so she will not be recognized as a wanted suspect.

Gom Jabbar has an overwhelming sense of noblesse oblige – that the high-born owe a duty to the less-favoured. This is compounded by her superhuman powers and formidable abilities, making her duty to help the poor and the underdog inescapable. Despite being an arrogant snob, she’s a sucker for a sob story.

When it comes to fighting for the underdog, she considers it her aristocratic duty to help those who ask for it, no matter how vaguely. It is, after all, normal that those not of blue blood and mired in decadent, materialistic societies headed by a vulgar bourgeoisie find themselves less well equipped to impose justice than the noble offspring of a true warrior. Or something like that.

Slumming is in fact a guilty pleasure for her. She enjoys it so much that she is actually far less insufferable and haughty when she works in the ghetto than in a Manhattan soirée. She considers it “rustic” and “authentic”, which is… aggravating. But on the other hand she’ll happily help with problems only a smug, overconfident superhuman would dare tangle with – then refuse payment.

Ingrid still lives under the shadow of her father. She always considers whether such and such action would please daddy or if he would disapprove. However, she is now in her 30s. Although she has always considered she had all the time in the world to form her own opinions, she is beginning to seriously doubt her inherited values.

Her noblesse oblige duty makes her fight along with varied minorities. And Vandal Savage’s might make right, ultra-conservative world view doesn’t seem to match with the people she actually encounters.

Likewise it has been pointed to her that she mysteriously forgot to apply her loudly anti-feminist opinions to herself, and it stung.

“Would you define yourself as deeply stupid or rather as profoundly moronic ?”

“This is the best-known painting by Monet , you uneducated Calvinist underpig.”

“As the insulted party, you have the choice of weaponry, yes. Pick a weapon. Any weapon. I do not care which. Stop wasting my time.” 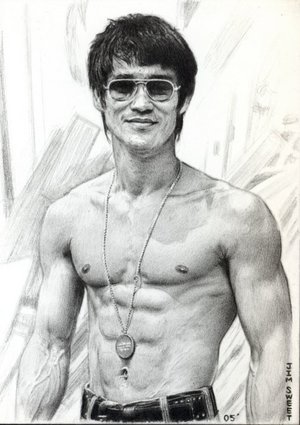 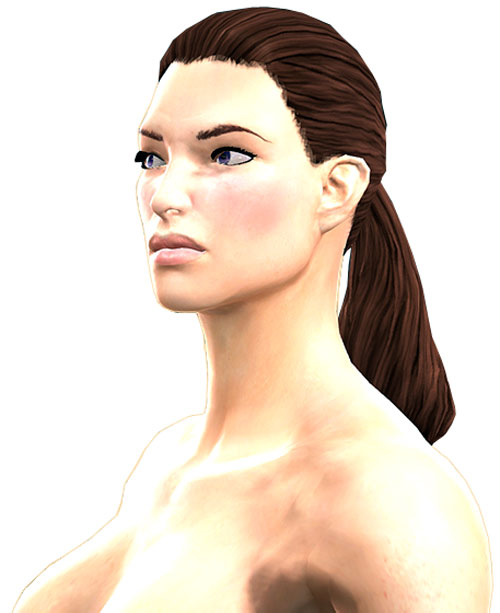 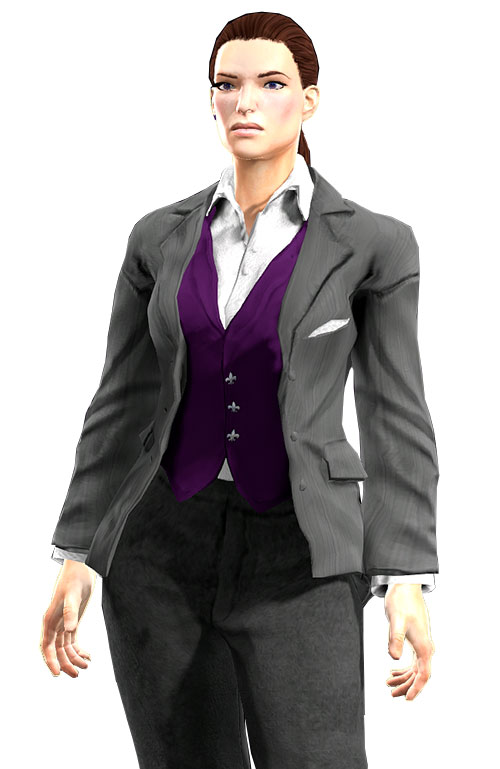 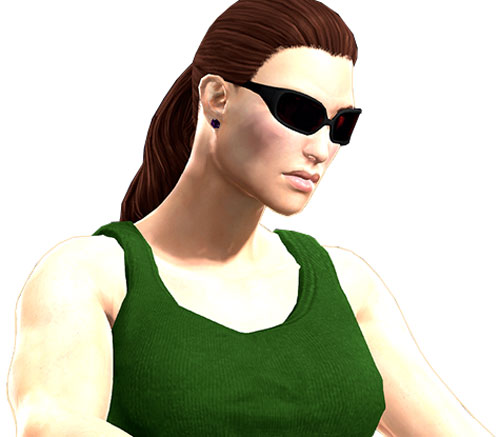 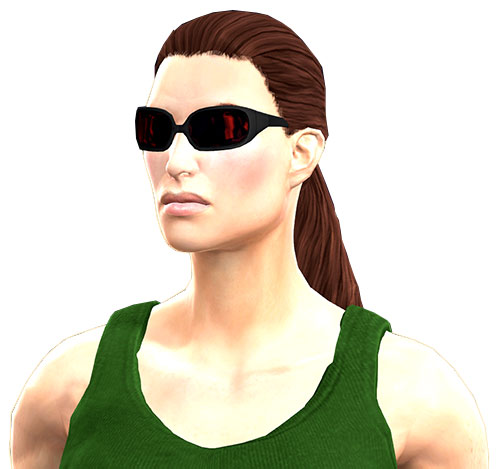 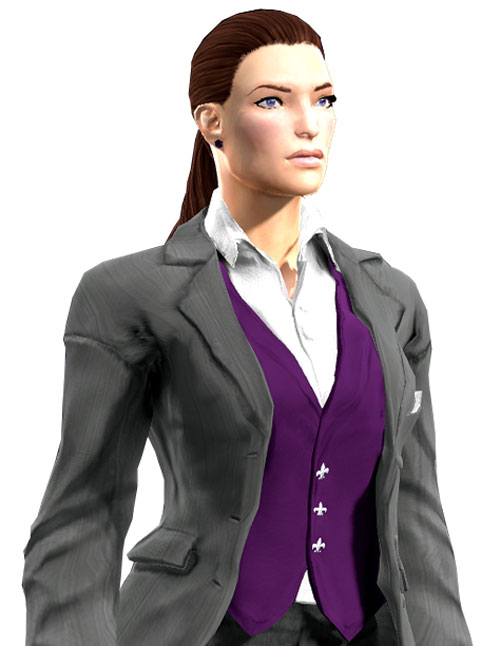 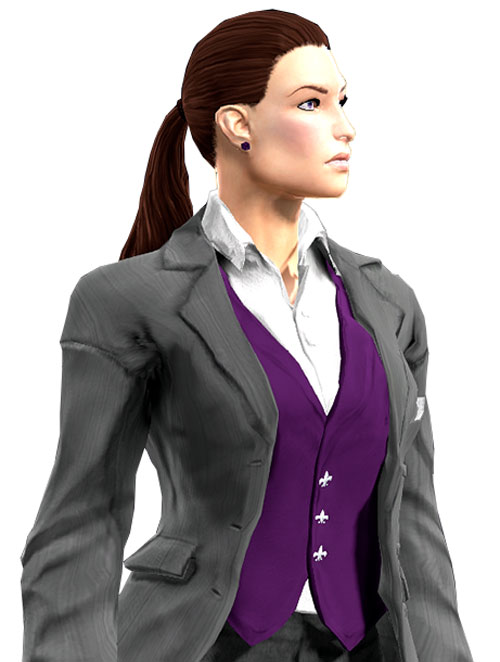