Gomdulla is a 60’ tall humanoid or construct with appropriate strength and durability (maybe “Class 60”). However, he seemed to be an unimpressive combatant or athlete.

He demonstrated the power of levitation, “flying” at about walking speed in a standing position and leaning forward.

Gomdulla also could take telekinetic control of man-sized stones to use them as imprecise projectiles. 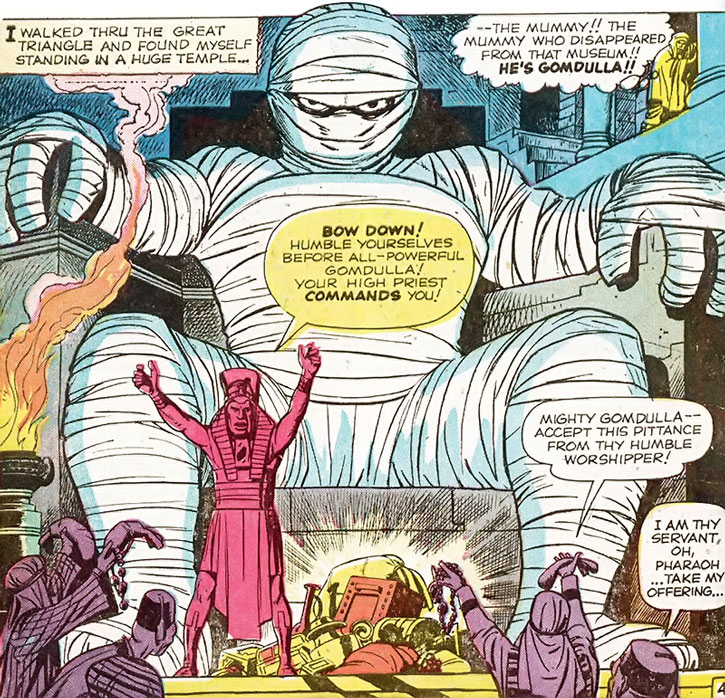 Gomdulla might have other powers. But he didn’t use any power against the Fantastic Four (and seemed overwhelmed).

The levitation thing might be a bit of equipment to help him operate on planets with a gravity higher than his own, such as Earth. Being 60’s tall isn’t easy in a 1G field. Gravity issues might explain his poor agility and precision.

For what it’s worth and assuming human-like density, Gomdulla would realistically weigh about 80 tonnes.

Gomdulla is reputedly a space alien. He came to Ancient Egypt during an unspecified era.

He created unspecified trouble. Presumably, he forced the locals into subservience and repelled relief forces. Then, he stumbled and fell inanimate. There was some sort of stud on his right foot that made him unconscious. It was accidentally pressed when he tripped.

The Ancient Egyptians buried him after wrapping him in mummy-like funeral bandages.

(No, it’s not supposed to make sense.)

The gigantic mummy was taken by Westerners and brought to a museum, presumably in Great Britain. For decades it was an imposing curio. Apparently, nobody ever determined its nature.

Circa 1955 a little boy accidentally hit the hidden stud whilst running about the museum. The “giant mummy” came to life, walked out and somehow disappeared.

In 1960, Interpol sent a detective named Paul after a growing criminal cult, the Worshippers of Gomdulla.

Paul tracked them down to Egypt, in the Great Pyramids area. He eventually discovered that they were worshipping the missing “giant mummy” who sat immobile on an ancient throne. The cult gave the riches that they stole to the giant. 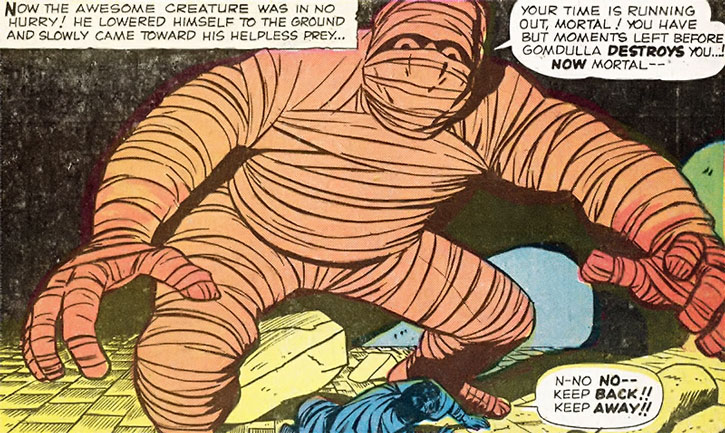 Assuming that the mummy was inert and it was all a scam by the high priest, the detective attempted to arrest the cleric. But it wasn’t a scam. Gomdulla the bandages-swathed giant rose and used his super-powers to stop Paul.

As the Interpol man was about to get killed, the high priest hit the stud. This saved Paul and returned the giant to ageless sleeping. The cleric explained Gomdulla’s history to Paul.

Apparently, this Egyptian man was buying time by acting as high priest. His actual goal all along had been to precisely locate the stud and take Gomdulla out. Paul’s impending death had forced the priest to make a chancy but educated guess.

Circa 1966, Gomdulla somehow ended up in New York City, possibly at the Baxter Building. After unrevealed events, the Fantastic Four ended up stopping Gomdulla in the street with the help of Spider-Man (Peter Parker).

Gomdulla returned in Egypt in 2013. He was defeated and possibly killed by the Lady Sif and three other berserker warriors whom she had recently recruited.

During the latter tale, it was implied that Gomdulla was among a motley collection of creatures exiled by Odin to another dimension.

These were said to be older than Asgard but not of Asgard. Which seems to be a little meta-joke, since these creatures were featured in Journey into Mystery issues before Thor made his appearance. 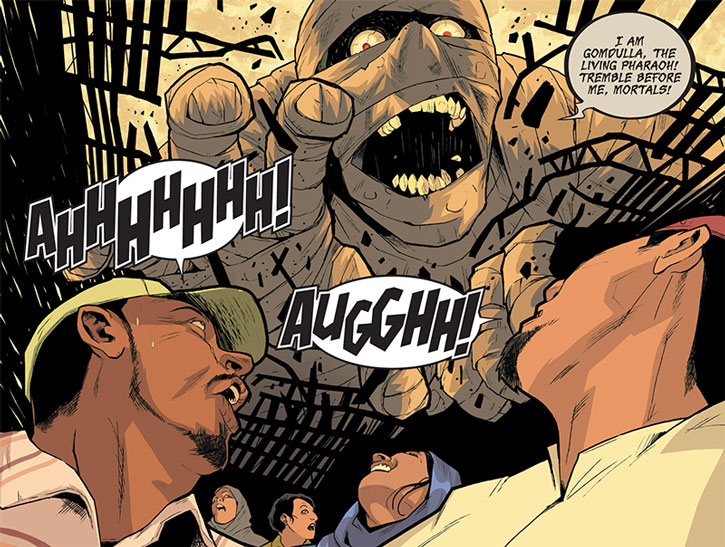 This prison dimension was separated from the Nine Worlds by mystically powerful water called the Black Lake. A company of Asgardian berserkers had also been sent to forever fight and contain the monsters therein.

Many Atlas-era monsters — such as Gomdulla — made Marvel Universe appearances. Therefore, it is possible that many of these strange creatures attempted to escape to Midgard and occasionally succeeded. Since he was in Ancient Egypt, Gomdulla may have been one of the early escapees from Odin’s prison.

Many of the 1950s, Atlas-era giant monsters were later identified as giant, one-of-a-kind Deviant mutates – the Mole Man (Harvey Elder) would later shepherd these on Monster Island. Others (such as Groot or Fin Fang Foom) were space aliens.

Beyond the Black Lake

Those Atlas-era creatures that seemed tied to the dimension beyond the Black Lake are :

Gomdulla seems to have dark brown skin under the bandages.

Gomdulla does big, bombastic Stan Lee-penned tirades. About being very powerful, and being a great supreme global overwhelming ruler, and how he should be in power.

He demanded that great riches be surrendered to him.

When the FF trounced him he was much quieter, giving the impression that he may just be a big bully.

“Fool, your gun cannot save you from Gomdulla !! Nothing can save you !! Gomdulla is SUPREME !”

Bonuses and Limitations:
Charisma is Contingent Upon Growth (one AP of Charisma per two APs of active Growth).

Advantages
No Vital Areas (see above). His Comprehend Languages Power is confirmed to have allowed him to speak modern English and Egyptian Arabic.

Drawbacks:
Power Loss: Hitting a stud hidden under his bandages will toggle on or off Gomdulla’s Suspension Power, even against his will.

There’s next to no information to base Mental and Mystical Attributes on, so these are conservative cookie-cutter numbers.

Helper(s): John Colagioia, Darci, Roy Cowan – and Marvunapp.com ’s Madison Carter for confirming it was a Stan Lee-penned story. The previous version of this article was based on a Dragon Magazine article by James Lewder. I used the listing in The Monsters from Journey into Mystery  to speed up looking for issue references at the end of the History section. 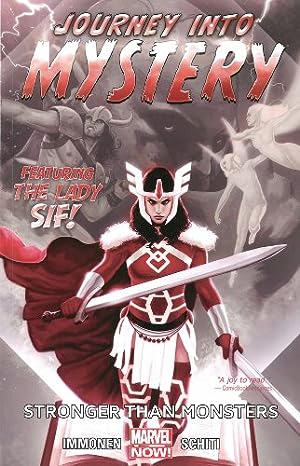 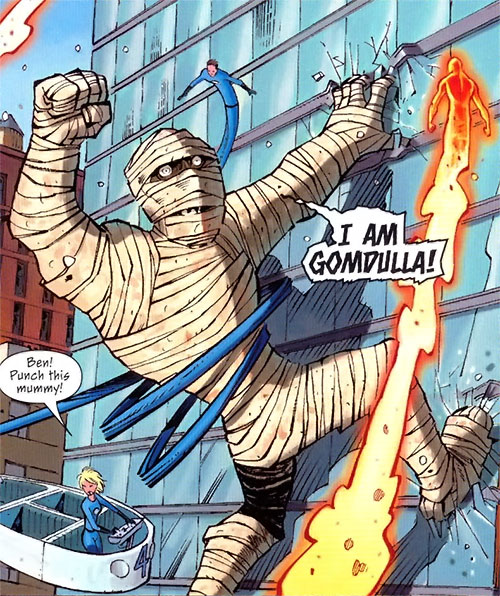