The Goon lives in a city reminiscent of an exaggerated 1930s Chicago. Everything is corrupt, and the mob is pretty much in control of everything. Even the G-Men are quite willing to cut deals with the mob to advance their agendas.

The city is bleak and squalid. Despite the attempts to maintain appearances of normalcy, it is also somewhat lawless.

The horrific supernatural is a common, fully accepted presence. The main such force in the city is the zombie mob. Meaning a large number of zombie made men reanimated by the zombie priest and serving his criminal empire.

They do all the usual mob stuff, plus a few extras like smuggling in fresh braiiiinnnnssss – or various animal body parts for the priest’s pet projects, such as 15’ tall zombie chimps.

Other horror elements are present. Such as redneck werewolves, vampire torpedos, pirate Cthulhu star spawns, weird science mad doctors, ghosts, etc.. Likewise freaks of nature are common, such as giant man-eating rats or men with their right hand welded to a bowling ball.

The Goon is a superhumanly skilled enforcer. He can single-handedly regulate a large city and put down armies of monsters, undead and so on. He has demonstrated superhuman speed, strength (“Class 2” or so) and durability on numerous occasions.

The Goon is easily able to defeat supernatural monsters such as vampires and werewolves with his bare hands. He seems impossible to scare or intimidate.

Having been raised on a circus, he knows many more tricks – such as escape artistry.

The Goon’s father died before he was ten. His mother ran off with a beatnik at about that time. That left him with his Aunt Kizzie as his only family.

Kizzie was a carnival strong woman. She raised him as well as she could among the carnies. When he was 13, the future Goon got a job shovelling manure and taking out the zombies that were disturbing the patrons. Those were the first zombies, as the zombie priest had just become active in town.

The carnies once had to hide the legendary kingpin of crime, Labrazio. Like everybody else, they owned him a favor. Labrazio had a formidable rep as the baddest, meanest criminal who ever worked in town. This fascinated the 13-years old kid. The boy started to help Labrazio with small chores to meet him, and Labrazio started confiding a few things to him.

However, the cops eventually found Labrazio. Aunt Kizzie died from the gunfire whilst trying to protect her nephew. Labrazio, feeling responsible, made the boy his main runner and soon, his top enforcer. The Goon was born, and ran such a tight ship that Labrazio mostly retired.

Only the Goon has seen him in 20 years. But the reputation of Labrazio the Baltimore Butcher is still sufficient to scare everyone away. Even if the Goon wasn’t that tough, *nobody* wants to mess with Labrazio.

At least, that’s the story that the Goon tells.

The thoroughly ruthless Labrazio never actually took the Goon as his protégé. What he really did was callously insult Kizzie as she died, for standing in the way of his escape. This enraged the future Goon, who brained Labrazio with a rock. The kid got away with Labrazio’s gun, cap and journal – which included a detailed description of all his dirty deals.

Pretending to be a runner and later an enforcer for the dead man, the Goon started working the town. At 14 he was making protection money, and providing protection. It is at that age he met Francis, a younger, scrawny kid who had been receiving beatings from bullies. Francis and the Goon became friends, with Francis convincing his mother to let the Goon sleep at home for some time.

Eventually, Francis was caught in a fight between the Goon and a band of zombies. His usual cowardliness faded – he grabbed an axe and went berserk on the slackjaws. Since then Francky, who knows the truth about Labrazio, has been the Goon’s best friend and partner in arms.

Though he appear to be a mere muscleman, the Goon runs much of the town. Ordinary people gladly pay him for protection, as he is pretty much the only form of law and order they can get. The Goon even keeps the undead in general — and the zombie priest’s zombies in particular — out of the streets.

Every criminal activity, including the sweatshops at the orphanage, is under his ruthless control.

His part of the town is far from the richest — rich people can pay the police — but of course the gigantic zombie horde of Lonely Street, under the control of the zombie priest, is poorer still.

A few years back, something terrible happened in Chinatown, involving the Goon and an unnamed woman. This incident may be the source of the Goon’s disfigurement.

The Goon is a brutal, relentless criminal enforcer. Anything that threaten Labrazio interests will eventually have to deal with him. He is the top dog, and knows exactly how tough he is. For instance he once threw aside his .38 to beat up a werewolf with his bare hands, as the .38 would have made it too easy. In many aspects, he’s something of an elemental force.

The Goon seems to enjoy wanton violence, and never hesitates to use copious amounts of it. Yet he is very professional in how he runs his part of town. The Goon is the only security for the impoverished citizens who cannot afford police protection. He let everyone think he’s but a thug, but he’s actually the boss.

The Goon has been bluesy and sullen. He cultivates a noirish attitude of overt suspicion toward any beautiful woman since the mysterious Chinatown incident. He is also somewhat bitter and bluesy due to the numerous scars in his face, and thinks no woman will love him now.

“I just had to pistol whip my way through a million man-eating rats the size of St. Bernards because of you people. Everyone get in line for your beating.”

“Marcio, you always have been a good pal and never asked for a favor until now… I’ll do what I can.”

“OK you pixies, I’m now officially in a bad mood. Just give me a reason to wipe my butt with ya.”

(Applying an arm lock to a two-headed zombie) “I’ve learned that one from the late, great Mexican masked wrestler El Diablo Bombastico.”

The Goon works in a gritty universe but with the Humour Genre and some over-the-top, absurd cartoonish elements. However, if the Genre is lowered and such elements are removed, with the crime stories emphasized, he can work very well in other universes.

Obvious choices include universes who already have a common supernatural presence and crime tales, such as the Nocturnals or Chance Falconer’s world. But a sufficiently dark corner of the DCU will do fine.

The Goon’s story can work in many countries. It would fit in the DCU version of many Brazilian favellas, for instance.

The Goon is haunted by the events in Chinatown and, apparently, the death of his true love. He will presumably never love another, and even under mental control refused to be seduced by another woman. His Misc. Advantage allows him to use his Iron Nerves bonus against mind control, as long as it involves staying faithful to his beloved.

Francky is the Goon’s odd, small partner. He has the following stats :

Source of Character: The Goon comic books by Eric Powell. 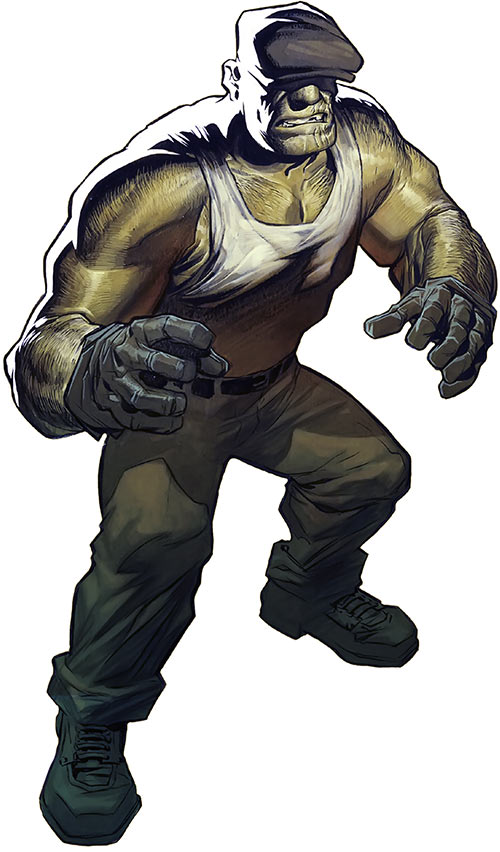 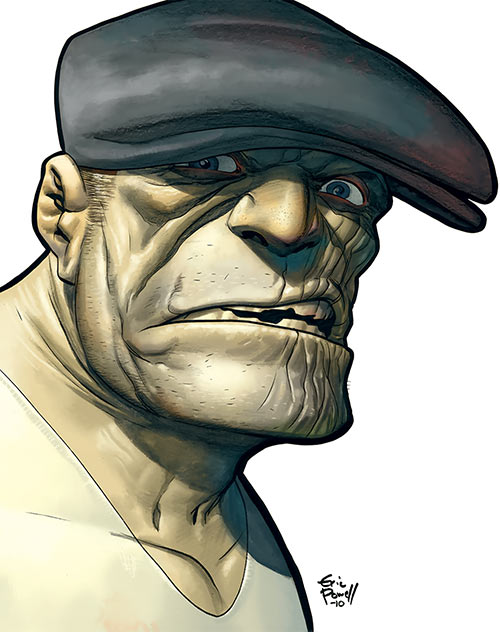 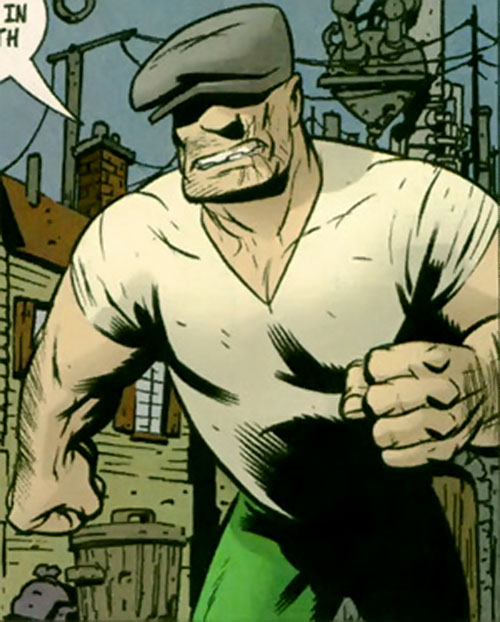 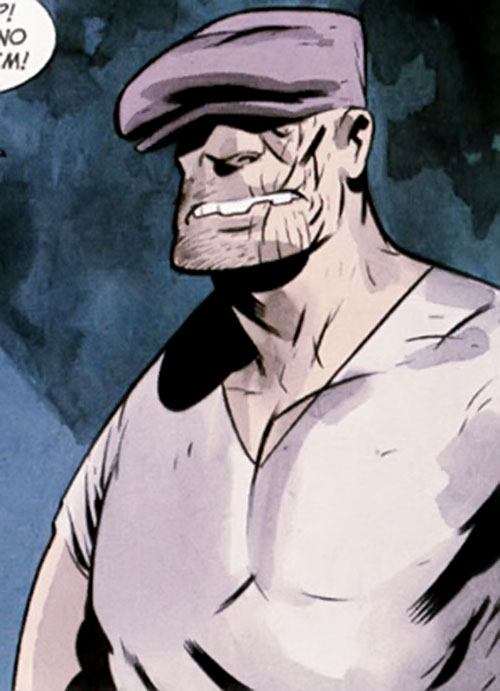 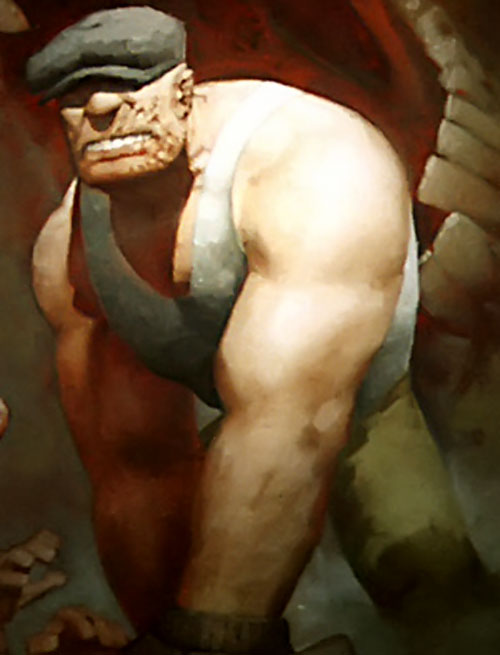 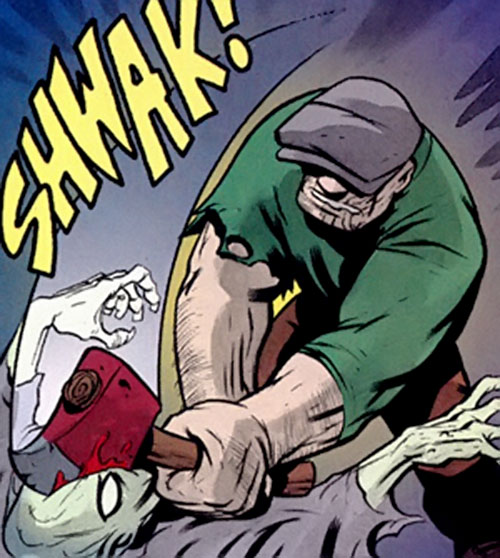 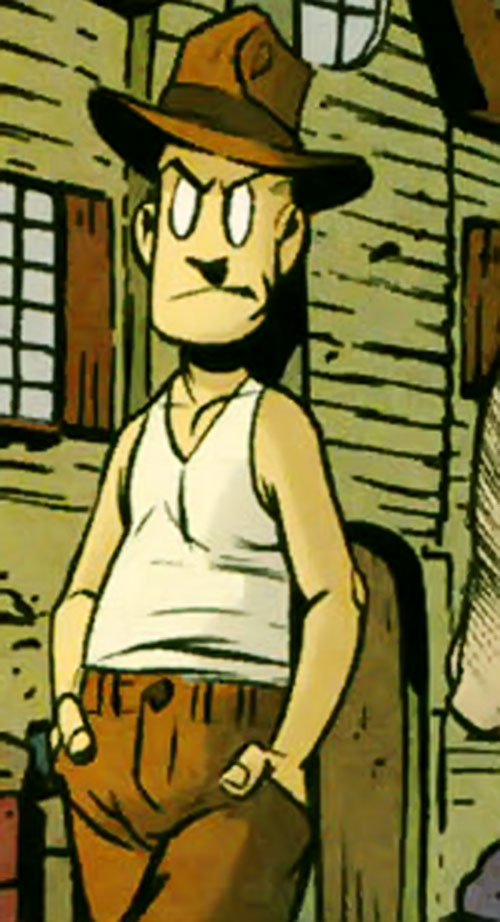