In his Gorgon form, Mortimer has a short red body with eight large tentacles emerging from his head. These tentacles can stretch a short distance. Gorgon is capable of increasing their size, as well as that of his body.

In combat the tentacles are his main weapon. They attack enemies at a distance, either knocking them around of wrestling them. Gorgon even managed to hold the Kryptonian-class  Ultraman for a short time.

The transformation to Gorgon is relatively controllable. However, Mortimer can begin to transform uncontrollably if he loses his temper.

Mortimer was a scientist working in the United States of Angor’s Experiment House. This was a secret military installation for producing enhanced operatives. He was caught in an accident caused by the management not listening to him, and had his genetic structure altered without his being fully aware of it. 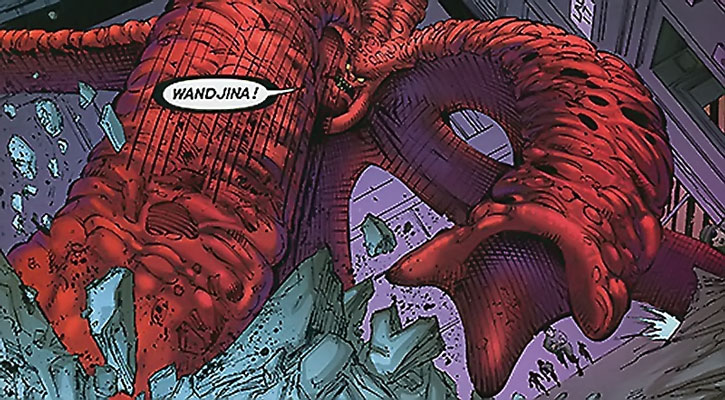 One benefit of the accident was that his colleague Susan, whom he’d had a crush on, actually spoke to him. They began a relationship, eventually marrying.

Dr. Leonard Grant, not-so-secret alter ego for the Meta-Militiaman Wandjina, later joined the lab. Mortimer began to get jealous of the time Susan spent with him. He eventually became enraged with the notion they were having an affair.

Returning home one night to find Susan brutally murdered, Mortimer snapped. Believing Wandjina responsible, he went on the rampage searching for him. However was stopped by Lord Havok.

Havok who revealed Gorgon’s tentacles each had individual personalities. And it was one of those, insane with mistaken jealousy, which had killed Susan.

Lord Havok helped Gorgon merge his personalities. Gorgon joined his Extremists in turn, acting as their spy within the Experiment House.

With the United States of Angor incensed at Lord Havok’s taking over of Slovekia and execution of the royal family, President Americommando threatened invasion. He would act even without the sanction of the International Council.

Soon after, Monarch appeared with some of his cross-dimensional super army. He invited them to join him. They refused, and a brief fight ensues between the Extremists, Monarch’s army, and the escaping Challengers, during which Barracuda was killed. The Challengers escaped, and Monarch withdrew, making a temporary alliance with Americommando.

When Tracer was badly beaten by Monarch’s troops, Lord Havok recalled the Extremists to Slovekia. They waited there while the Meta-Militia fought through Lord Havok’s army of Havokoids. The Meta-Militia then tried to break through the force field surrounding Slovekia.

Tensions among the group escalated as attacks were made on places close to them. For instance, the Experiment House was destroyed by Monarch’s forces. 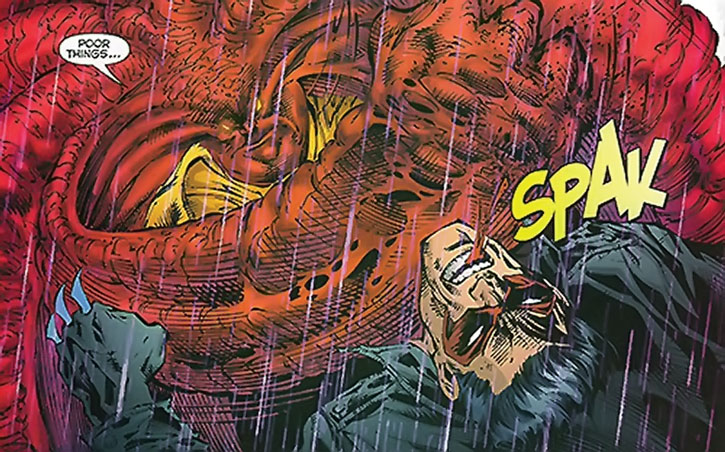 The Meta-Militia, led by Americommando, and aided by Monarch, broke through the field surrounding Slovekia. The remaining Extremists fell quickly before them. Meanwhile Lord Havok remained ensconced within his lab.

The invading force finally entered it to discover themselves in a large empty room which neutralized the powers of all within except the Extremists, who’d freed themselves and followed them in.

Faced with a powerless Wandjina, Gorgon devoured him. The only enemy survivors of the ensuing slaughter were Monarch, and President Americommando. Ammericommando was taken down by Vice-President Bluejay, who’d turned against him in the earlier battle, believing he’d taken Angor in the wrong direction.

Returning (most of) Monarch’s power, Lord Havok agreed that the Extremists would serve him. Joining Monarch’s army, the Extremists were part of the invasion of Earth-51. It eventually went bad, when Superman-Prime arrived. He breached Monarch’s armour, thus causing an explosion which annihilated all life.

But before it could engulf them, Lord Havok used the fragment of power he hadn’t returned to Monarch. He thus teleported the Extremists safely back to their own universe.

There they took up residence in a base he’d constructed within the moon, from where he could observe the Multiverse and make plans.

His multiple personality problems has apparently been dealt with by Lord Havok. Yet Gorgon still seems to switch between insecurity and manic aggression.

His uncertainty is most often displayed among his team mates. He’s reluctant to express an opinion, or rock the boat. Gorgon will go along with whatever the rest of them believe.

Faced with enemies, however, he appears a confident and brutal opponent. In such circumstances he turns his insecurities into anger.

“You can’t say I didn’t warn you, Diehard. Now look at you. Beaten. Humiliated. Pathetic.”

With Gorgon being a counterpart of Doctor Octopus in the Marvel Universe, the Extremists might do best as being from an alternate reality.

His appearance is different enough from his counterpart, though, that he could be transplanted without worrying about confusion. 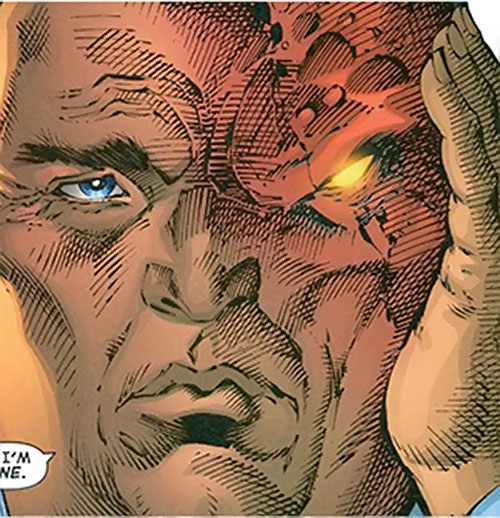 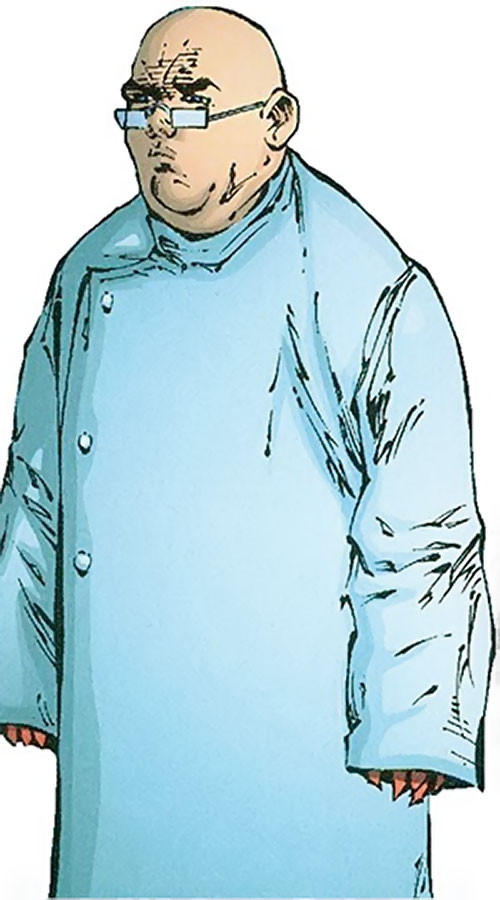 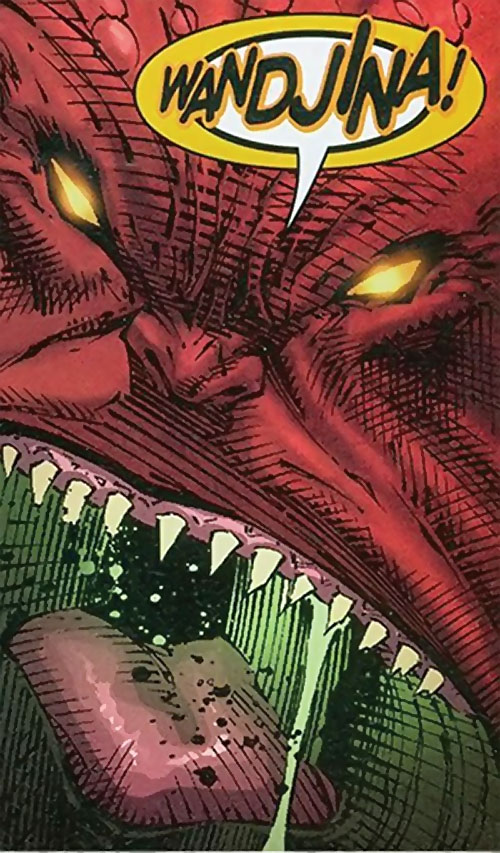 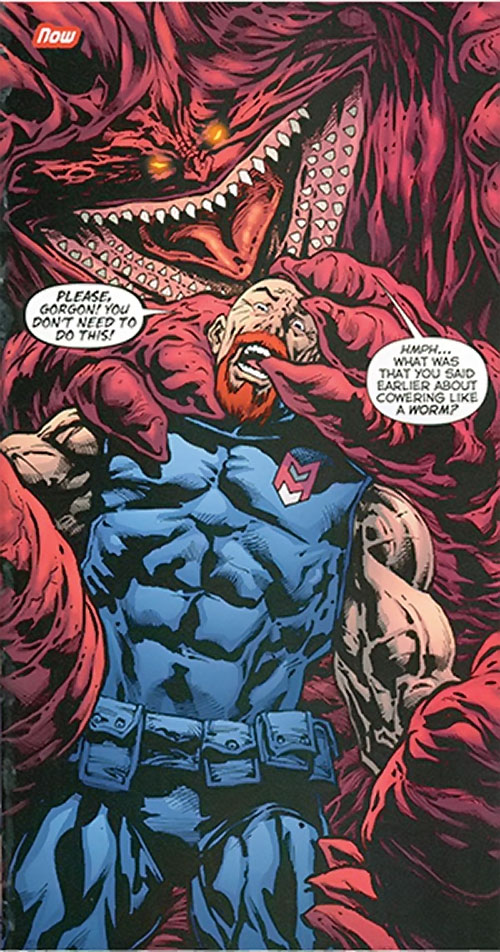 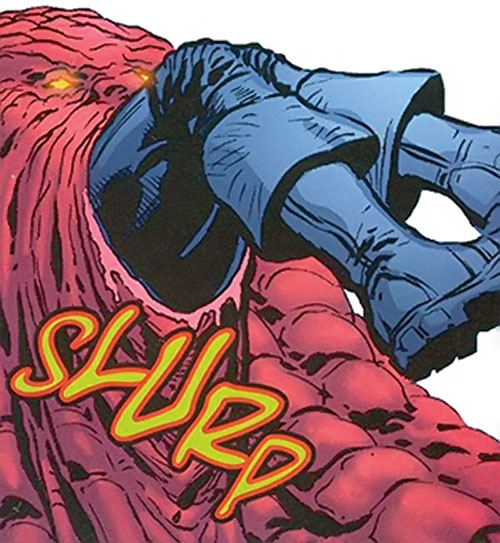