His physical skills border on super-human. Furthermore, the Gorgon amplifies these in combat by using his telepathy to know his opponent’s moves as soon as they think of them. This makes him a truly formidable opponent, able to handle foes like Wolverine or Elektra with overwhelming ease.

He’s able to take astounding amounts of damage and recover quickly. This has included serious strikes from an enraged Wolverine which didn’t stop him fighting back. This is probably due to some level of healing ability.

Eye contact with Gorgon turns anyone meeting his gaze to stone. As a result he usually wears dark glasses, or has his eyes bound. He can operate blindfolded without problem, probably using his telepathy to see his surroundings through the eyes of others.

Extraordinarily intelligent, Gorgon is skilled in multiple artistic and academic fields. He could well have more knowledge than he has so far displayed.

He was given the sword Godkiller by the Kraken. An old blade which has shed much blood in its time, it was broken when he faced the wielder of its twin Grasscutter , which Gorgon took to replace it.

The First Life of Tomi Shishido

Tomi’s mutant abilities manifested early. He spoke his first words at two weeks of age, and walked at three months.

His superhuman intelligence saw him reading and writing by his first birthday, becoming an accomplished painter by four, and composing an opera by six. His sixth birthday also saw his second suicide attempt.

At 13 he devised a mathematical formula proving the existence of God. He also discovered his mutant ability to turn people to stone, earning him the nickname the Gorgon. Shortly thereafter he became leader of the mutant death-cult, the Dawn of the White Light, committing terrorist acts throughout Japan.

At 18 he decided to join the Hand. He killed his family by turning them to stone, to prove his ruthlessness. Shortly after doing so he was visited by the Kraken, a legendary agent of HYDRA. The Kraken helped people find the destiny he saw for them. He gave Gorgon the sword, Godkiller.

Gorgon travelled to the Hand sanctuary in Akamatu. Fighting past an army of their assassins while blindfolded, he gained an audience with their grandmaster. To prove his dedication, he killed himself, telling them to resurrect him.

They did, and he quickly rose to become a leader in the organization.

Enemy of The State

Before long he spearheaded a joint operation with HYDRA, and personally led the capture of Wolverine. Using their resurrection rituals, they turned Wolverine into their puppet and sent him out to kill other super-powered individuals. They also used the process on those corpses, building an army.

Gaining the affection of HYDRA’s secret backer, Elspeth von Strucker, Gorgon eventually took control of HYDRA away from Baron Strucker. The Baron was seen as having failed when Wolverine broke away from their control. Baron Strucker apparently committed suicide, leaving Gorgon in control.

(This turned out not to be the real Strucker, who was busy with other plans. Given this, the true identity of Elspeth von Strucker is also unclear.)

Using blueprints they’d had Wolverine steal from the Baxter Building, HYDRA planned to wipe out all life on the planet. This was a part of the Gorgon’s nihilistic agenda to snub God. Wolverine, now working for S.H.I.E.L.D., led an attack on HYDRA which saw Elspeth killed when the safe-house collapsed.

The Gorgon launched an attempted assassination attempt on the hospitalized Nick Fury in retaliation. He was delayed by Elektra, whom he beat, and then stopped by Wolverine. They fought, and Gorgon tried petrifying Wolverine. Wolverine managed to reflect Gorgon’s eyes on his claws, and Gorgon himself turned to stone. Wolverine then shattered his body.

The Third Life of Tomi Shishido

The rock fragments of his body were acquired by HYDRA, who forced the Hand to resurrect him. He was inducted into their new ruling council, under Baron Strucker’s command. He sat alongside the Kraken, Hive, Viper, and Madame Hydra. They began a serious campaign to seize power in the wake of S.H.I.E.L.D.’s collapse.

He was on the front line of many of their operations, and took his toll on the forces Fury arranged to oppose them, taking Slingshot’s arms, and killing Gabriel Jones. 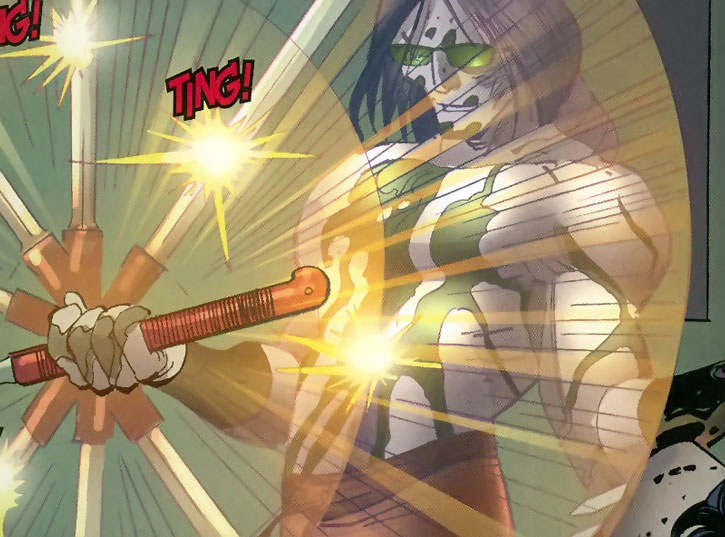 When Viper was taken by Leviathan forces, Gorgon felt guilty at having been unable to prevent it. This may be what made him willing to accept Madame Hydra taking what Leviathan demanded in exchange for Viper, despite knowing Kraken was arranging telepathic tests of all HYDRA members searching for a spy.

Madame Hydra (Contessa Valentina Allegra de la Fontaine) was revealed to be the traitor, a deep cover agent for Leviathan. Thus, Viper was executed once she got away with the device which let the Leviathan forces be reawakened.

Viper’s body was returned to them. Hive used one of its parasites to restore her to life, albeit with a tentacled mass over the top of her head. She became the new Madame Hydra.

Talks were held between HYDRA and Leviathan, to no avail. War broke out between the two organizations, continuing for a while. A truce was on the table at one point, until Magadan of Leviathan was assassinated, implicating HYDRA.

Fury’s team tried infiltrating HYDRA’s spiritual centre, the Gehenna base. However, a traitor in the team warned them beforehand, enabling a trap to be sprung. Fury’s forces fled, HYDRA on their tail, and Phobos guarded their retreat.

Having always wanted to kill a god, and with Phobos wielding Grasscutter, the twin of his own blade, Godkiller, Gorgon claimed the fight against the young god for himself.

They fought, their skills on a par. But after his blade was shattered, Gorgon still managed to use it to run Phobos through the chest, killing him. He took Grasscutter for his own, claiming ’a red sword for a red lord‘.

(In the actual fight both blades break together. In the following issue, when Gorgon claims Grasscutter, it’s inexplicably whole again.)

Despite Gorgon’s victory, Fury managed to detonate a bomb within the Gehenna facility, striking a serious blow against the organization. Strucker insisted on maintaining it as their base.

Gorgon, Madame Hydra, and Hive argued that it had been and compromised. A split occurred, with the three leading a separate faction, severely decreasing the power of HYDRA.

Their power was further weakened when one of Fury’s teams gave their lives to destroy the Hive’s spawning base. Gorgon and Madame Hydra survived the war, though, with some HYDRA forces still loyal to them.

Supremely confident, having returned from death twice has left Gorgon feeling invincible, as though his powers alone weren’t enough. His intelligence makes him aloof and arrogant, and he was surprised at Reed Richards’ work considering he wasn’t a mutant.

He relishes the chance of combat, and can have trouble turning away from a fight, certainly once battle has been joined. He can sometimes get hot-headed about things, especially since his second return to life.

His primary goal is to punish God for causing the misery that is life. Gorgon will always be looking at big plans which could see the end of all life on Earth, and a way to gain his revenge for having been born.

“If you mean to kill me, know that I have tried several times myself. It is no easy thing.”

“That means we use what we stole from Richards and make man as free as he was before birth. Isn’t that exciting ? That means we won’t be God’s slaves anymore.”

Gorgon: “You understand why we’re building these weapons, don’t you ? You appreciate that this bid to end all life is just a strike against The Light. Against God, I mean.”
Elsbeth Strucker: “We never asked to be born.”
Gorgon: “Exactly. I just worry sometimes that New HYDRA’s actions are perceived as cruelty when my intentions are much more pure than those of your late husband.”

“I have died and been born again. There is nothing I fear.”

Drawbacks:
Mistrust (Mutant), Power Loss (Without a valid target for his Telepathy, Gorgon’s DEX and Linked Skill are reduced to 8 AP, and he loses Danger Sense, Reflection/Deflection, and Remote Sensing). 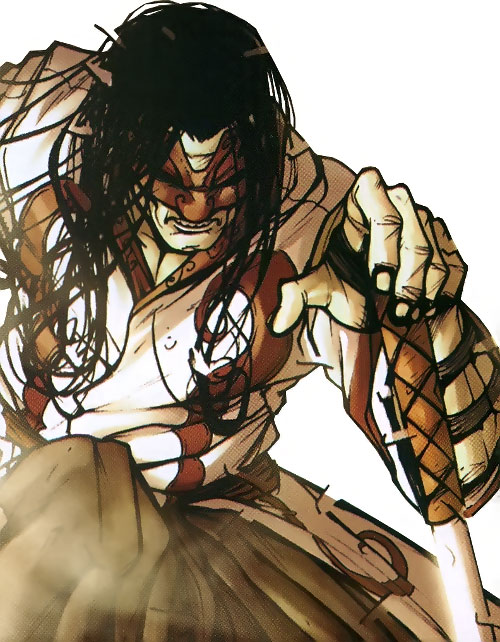 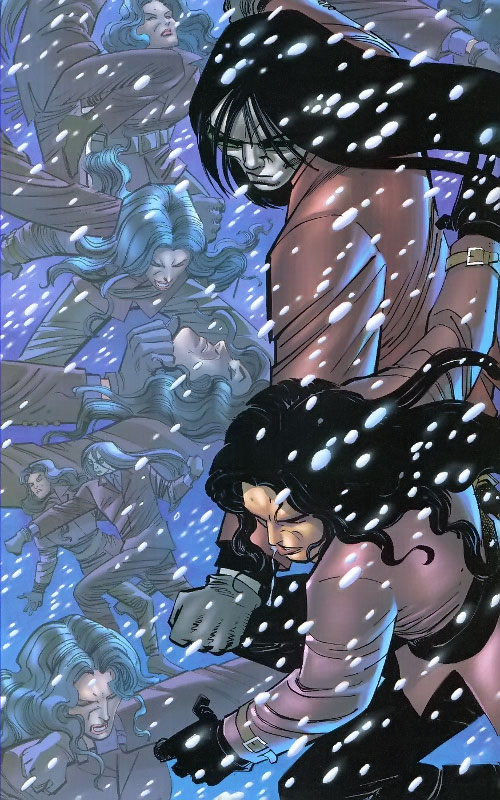