The Gorilla Knights are from Gorilla City. They thus are highly intelligent, super-strong gorillas with a high psionic  potential.

All had their genetics rewritten by Gorilla Grodd to enhance their strength (“Class 25”), speed and durability – which might explain why they all have white fur.

The Knights are highly-trained shock troops capable, as a unit, of engaging powerful superhumans. With their great strength they favour melee combat. They usually use short polearms with an energy blade, but can fight hand-to-hand — their fangs can bite through armour plating.

As apes, the Knights have a rich sense of smell, a talent for climbing things, great ferocity when angered, and the ability to meld into a forest or jungle to wage guerilla warfare. At least one member of the team is telepathic, allowing the Knights to communicate swiftly and silently when needed.

It is also possible that one of them has a talent to cloud men’s men to make the team invisible, but the scene is ambiguous. Our game stats just assume that they are good at hiding even indoors.

The Knights are apparently a mix of grizzled soldiers looking for a fight and more naïve discontents. They were convinced to become a super-simian shock unit for Gorilla Grodd. The Knights were meant to take on even the toughest superhumans.

Though it wasn’t mentioned, it is possible that they were among the jetpack troops who clashed with the Ultramarines and the Justice League when Grodd attacked Superbia.

Grodd then directed the Knights’ attention toward poachers who had killed ordinary gorillas not far from Gorilla City. The troopers leapt to the conclusion that they needed to beat back all humans within a large radius.

The Congolese government presumably required Justice League assistance to deal with these, and Wonder Woman (Diana of Themyscira) soon met the entire squad in battle.

This was apparently Grodd’s goal all along, to test his soldiers.

However, Wonder Woman convinced the Knights that they were manipulated. She forced the squad leader, Tolifhar, to submit to her. Realising that Grodd had been lying and having nowhere to go, the gorillas agreed to serve Wonder Woman in exchange for her stopping the poachers and negotiating the conditions of their surrender with the government of Gorilla City.

Diana let the Knights crash in her Washington, D.C. apartment. Though there were some misunderstanding due to differences in species and culture, the gorillas were entertaining and pleasant houseguests, albeit a bit tiring.

When Wonder Woman stormed the deserted island of Themyscira to retake it from Captain Nazi’s stormtroopers, the Gorilla Knights insisted on joining her. They provided tremendous backup despite being outnumbered more than 10-to-1.

When they started taking casualties Diana had them take to the jungle for guerilla warfare as she focused on finding her mother – the sole known occupant of the island. She and her gorillas were successful, and the Nazis had to retreat with heavy losses.

Half the survivors remained on Themyscira as an honour guard for Hippolyta. The other five, including chief Tolifhar, remained in Diana’s service.

Agent Tresser of the DMA discovered the Knights in Diana’s apartment and attacked, assuming that they were Grodd agents. The apartment was devastated, by Diana’s sister Donna came in in time to defuse the situation.

These Knights later accompanied Diana to war a second time, to engage the monster Genocide. During that battle one of the Knights, Randa, was killed.

In defence and service

Meanwhile, Zeus’ reckless policies resulted in a built-up toward civil war in Themyscira. As opponents had recently used her allies to get at her, Diana chose to intervene without warning the Knights serving her. But those Knights on Themyscira were caught in the upheaval.

A new Queen, Alkyone, tricked them into surrendering – and intended to execute them as spies for Wonder Woman.

A Wonder Woman-led revolution arose against Alkyone and her divine backers, freeing the gorillas from the gaol so they could join the fight against the gods. The revolution was successful, though Wonder Woman renounced her Amazon ties for a time. 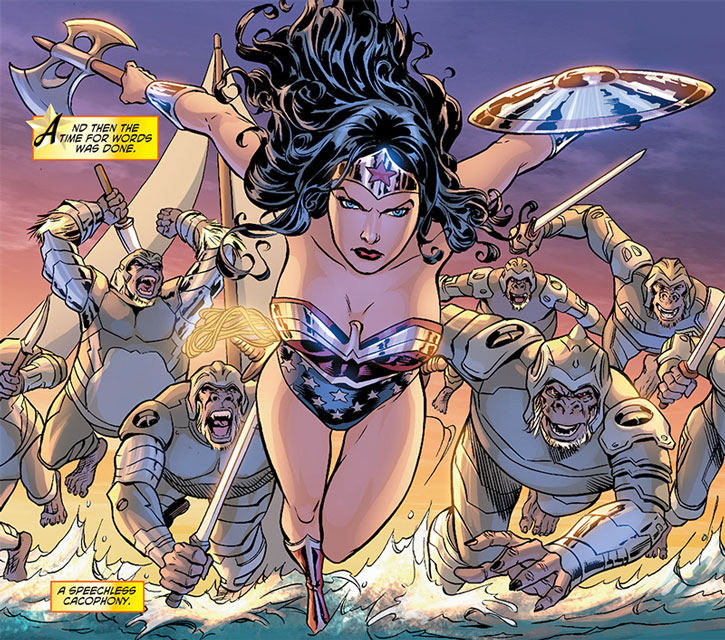 Still mindful of having her allies used against her, Diana dispatched one of the Knights to the hospital where Etta Candy-Trevor was recovering from grave wounds. This was a good move. When one of the Children of Ares came in to torture and killed Etta and her husband Steve, the super-simian soldier rammed the Child into a wall before anybody could die.

The gorillas, the Trevors and the DMA survivors fought back-to-back until they could be relieved by a task force from Themyscira led by Achilles Warkiller, Queen Hippolyta, Artemis and General Philippus.

The valorous actions of the Gorilla Knights in service to the Amazons earned them their pardon, and King Solovar let them honourably return to Gorilla City.

The average Gorilla Knight is about 7’4” and 820 lbs. That’s about as tall as Chewbacca, and more than twice as massive. The leader, Tolifhar, is visibly older and is missing an eye. He seems to be the simian equivalent of the grizzled sarge.

The mores, instincts and customs of the Knights are those of gorillas. They do not consider themselves to be profoundly different from normal apes. For instance once Wonder Woman beat them and their leader they naturally accepted her as their new alpha – this is simply how things are done.

There was one faeces-flinging incident due to a flare of tempers (though the gorillas sincerely regretted it), and the Knights were surprised to discover that human children cannot easily climb walls.

Gorilla City being so advanced, the Knights behaved like tourists from a rich country visiting a poor one. Though they certainly weren’t rude they were generally amused by human societies, thought that things were a bit crude compared to how they were back home, and were interested in sampling local foods and other specialities.

The Knights tend to frame things in their own terms. They considered that the apartment they were in was Princess Diana’s nest, groomed people to show friendliness, and had no sense of privacy since they were themselves always naked and with a very collective mindset. When offered to shake hands, they didn’t know what to do and assumed they were meant to lick it.

Outside of war the Knights aren’t portrayed as regimented, disciplined soldiers – but more like Wonder Woman’s wacky sit-com buddies, with a great sense of repartee. Since they couldn’t quite run around in the street, they spent a lot of their downtime watching TV, chatting with each other and socialising with Wonder Woman’s friends.

The gorillas do not seem to have a strong sense of individuality, and appear to see themselves more like a tribal collective. They do everything together, and the only one who stands out and is commonly referred to by name is the leader. They address Wonder Woman as “your Majesty”.

Being from Gorilla City, the Knights are smarter than the average human. Tolifhar, especially, is well-read and very articulate, and when one gets to know them they are obviously an intelligent, cultured, discerning lot with an excellent sense of humour.

Tolifhar once explained that his people believe that there is an afterlife for honourable gorillas. It takes the form of a great forest with an endless number of good (that is, somewhat rotten) things to eat.

Tolifhar: “I see. When do we go [into battle at your side] ?”
Wonder Woman: “Chief of apes, I can’t ask you to…”
Tolifhar: “Your Majesty, that is entirely the point. You don’t have to ask.”

(Nemesis flinches as one of the gorillas starts attentively rummaging through his hair)
Nemesis: “What the hell ?”
Donna Troy: “Rhanda’s grooming you, Tom. I believe it’s his way of showing acceptance.”
Nemesis: “Okay, this has officially gotten weird.” 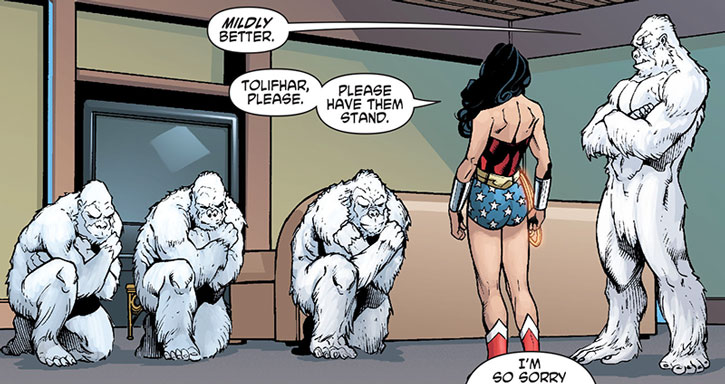 (After an executive assistant offered to bring coffee and fruits and was more or less ignored) “We would like to hear more about the fresh fruit portion of the negotiations.”

“This ‘film’ is nothing but a mishmash of better movies and cynical displays of human female fatty tissue. And it lacks a proper second act. Now find the Princess or I will tear you apart.”

“For Gorilla City ! For Themyscira ! For Diana, Princess of us all !”

Tolifhar: “Roust, you layabouts ! Enough with the operas of soap ! Your Princess has entered the room. Do not embarrass me.” (the troops hurriedly tear themselves from the telly and salute Wonder Woman)

The Knights can readily exist in the Marvel Universe – as Knights of Wundagore. 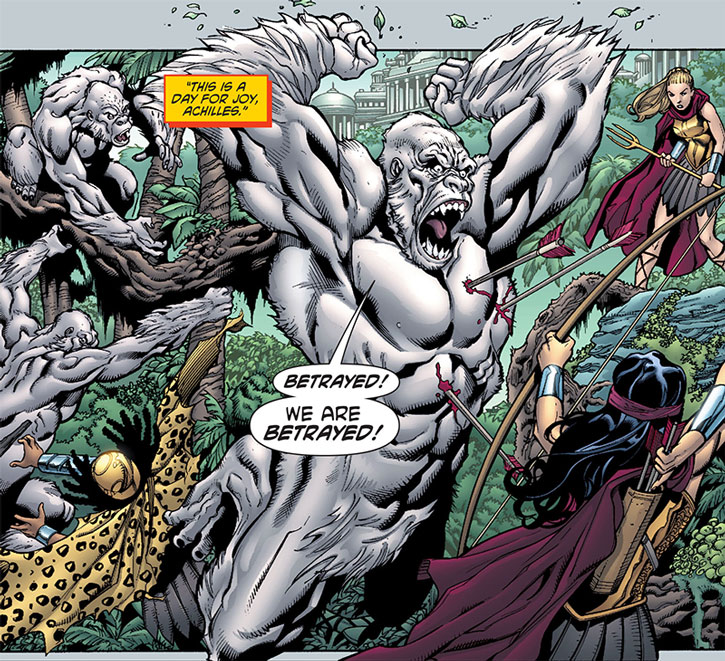 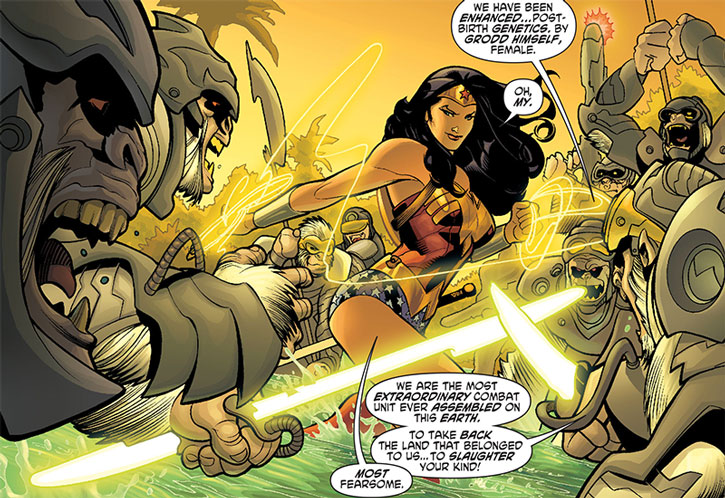 As they leave, the gorillas recover their Benefit 2 (Gorilla City subject) Advantage that was suspended during their exile but lose their Benefit 1 (Friends of Wonder Woman).

Source of Character: Gail Simone’s run on Wonder Woman in the late 2000s. 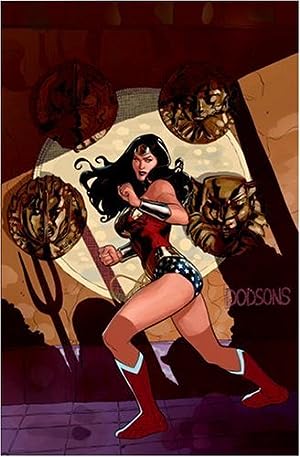 Wonder Woman by Gail Simone (in order : The Circle, Ends of the Earth, Rise of the Olympian, Warkiller, Contagion.) 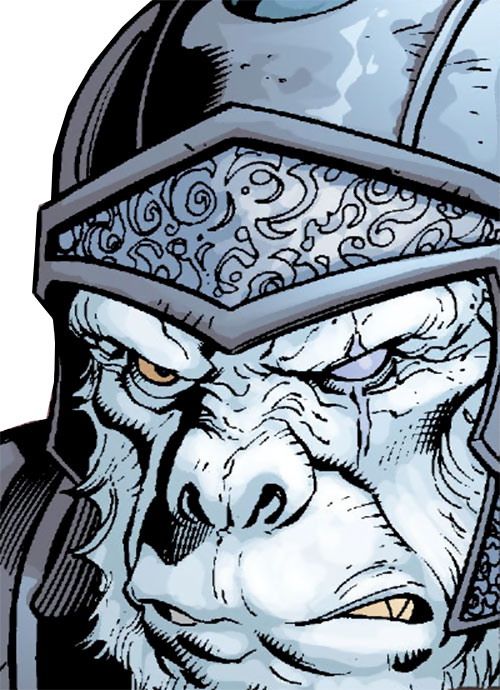 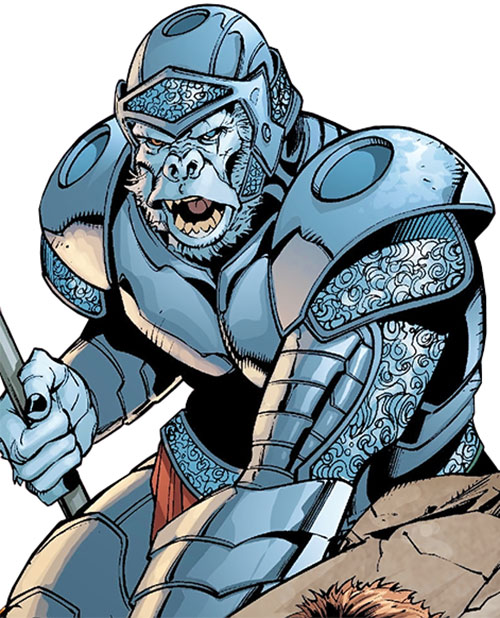 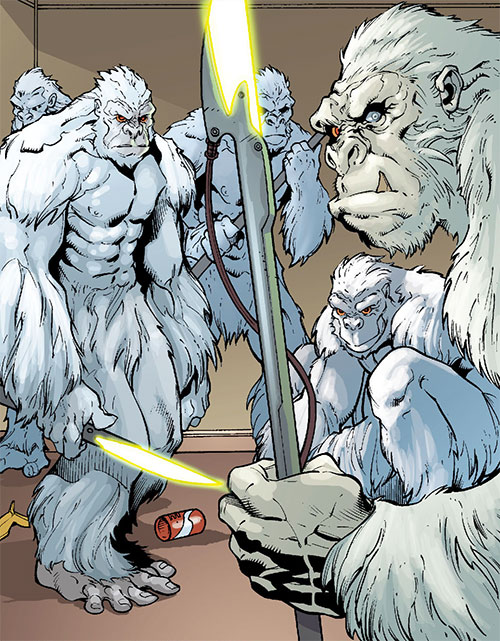 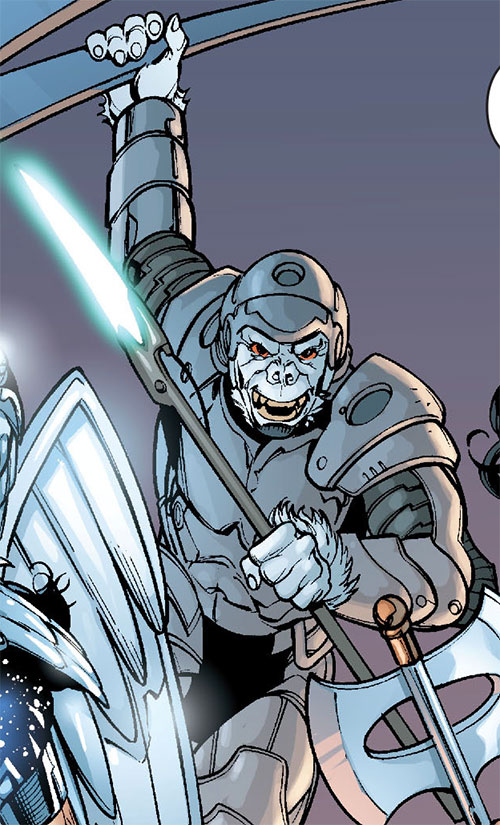 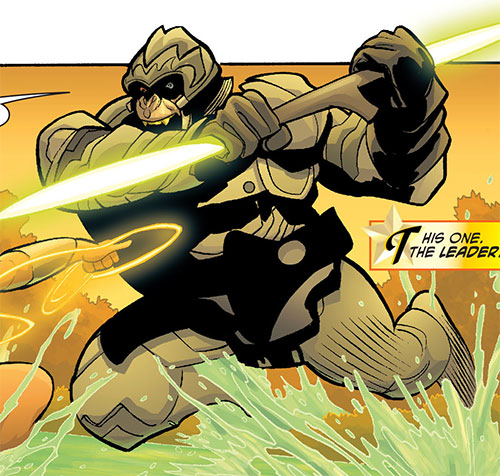 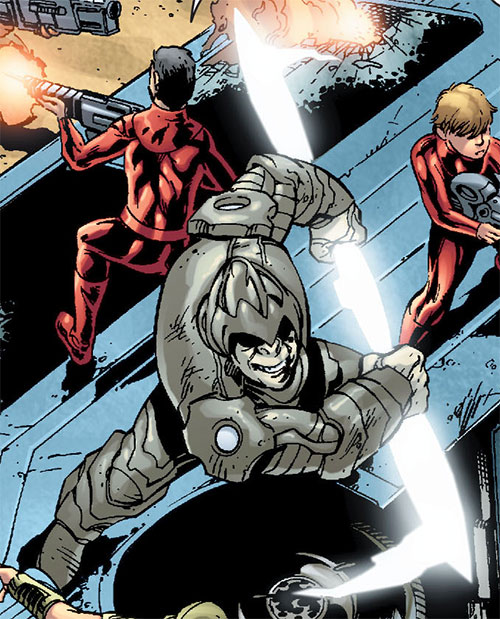 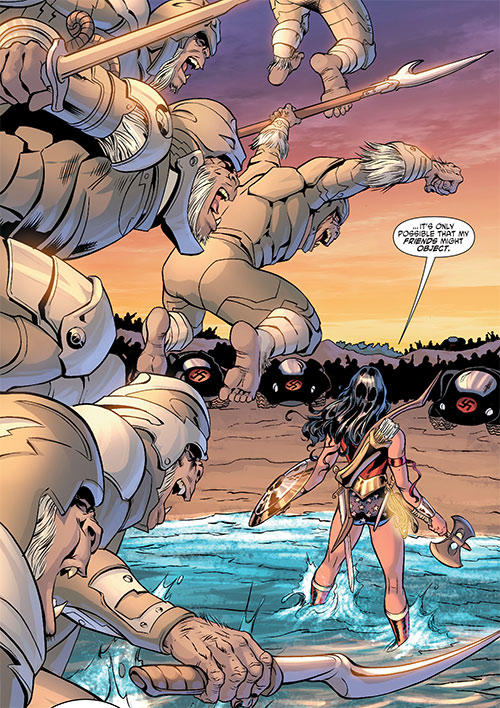 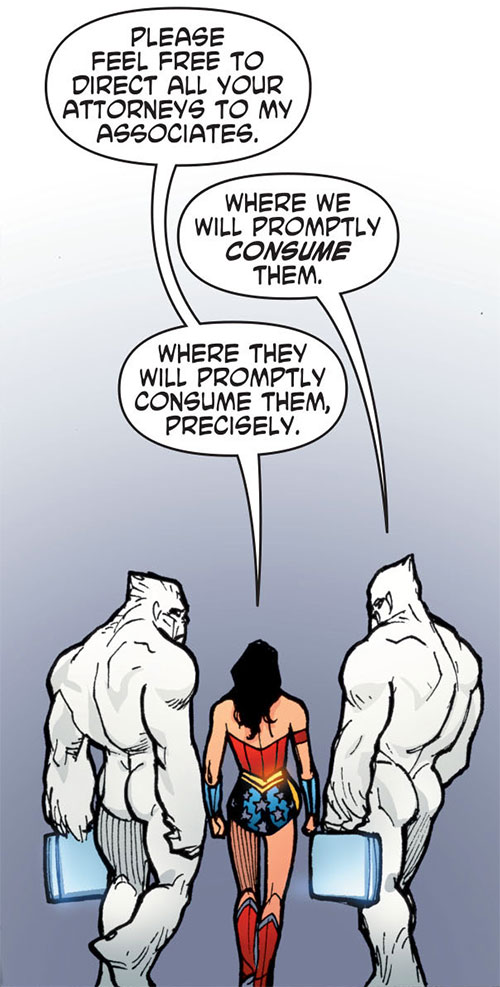