A very strong and agile specimen of a mountain gorilla, Ken is also skilled in the use of a range of firearms. His prehensile feet allow him to shoot just as well as with his hands.

In his current form he doesn’t age, and the only way he can turn back to a human is when he dies and the Curse passes on.

The curse also gives him a level of resistance to emotion-affecting powers.

The histories of the characters were tweaked a bit in the Agents of Atlas series, and this profile reflects the updated history.

Ken Hale was a scholar, explorer and soldier of fortune in the 1950’s. He became obsessed with immortality. He learned of the legendary “Gorilla Man,” — a half-man, half-animal monster in a remote corner of Africa. The legend said that whoever killed the beast would never die.

Leaving his wife and kids to seek out the Gorilla Man, Hale found it but couldn’t kill the creature. It was too human-like. 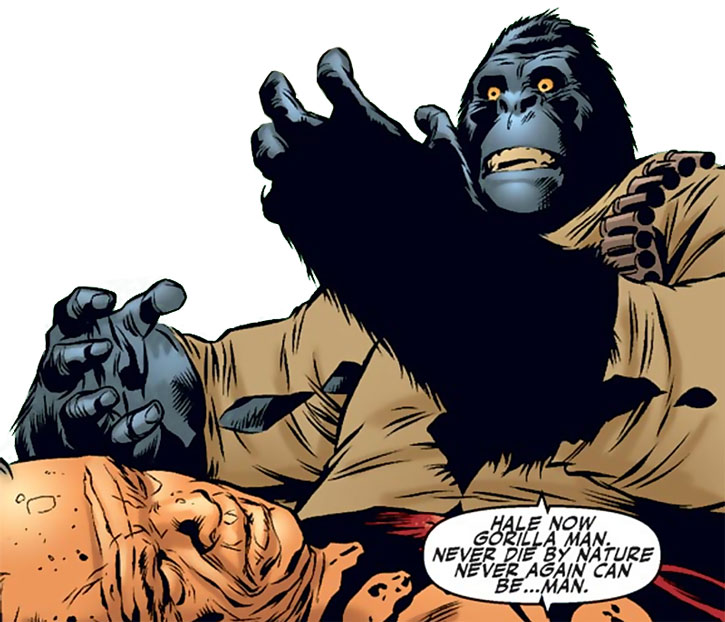 Losing his way, he was forced to fight and kill the monster when it came at him. He then learnt the truth: as one Gorilla Man died, another was reborn. Hale was transformed by a curse into a new Gorilla Man. Repulsed and ashamed, Hale elected to stay in the jungle rather than return and face the public or his family.

His attempt to hide proved unsuccessful. His wife managed to hunt him down months later, only to be shocked at the sight of a gorilla. The exact conditions of this meeting, and whether or not she knew it was her husband, are unknown.

Later that decade Gorilla Man was sought out by Marvel Boy (Robert Grayson) and Jann the Jungle Girl, on behalf of FBI agent Jimmy Woo. After Marvel Boy promised to search for a cure for Hale’s Curse through Uranian science, Hale agreed to join Woo and his allies in freeing President Eisenhower from the Yellow Claw. 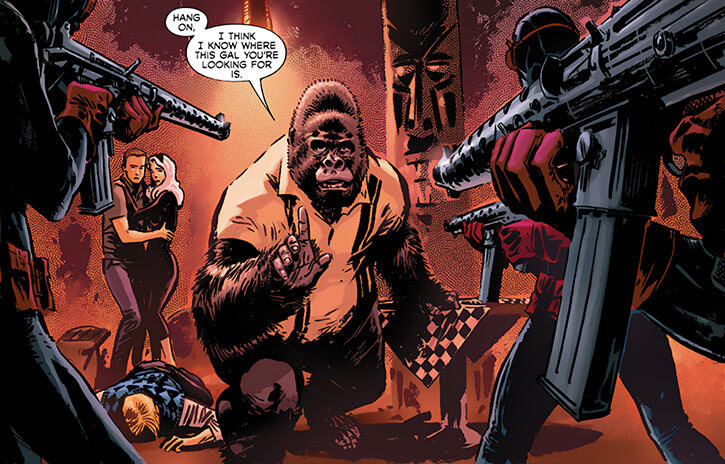 He remained with them until they disbanded 6 months later.

During the 1980’s Hale returned to the jungle where he’d gained his Curse, to try to get it removed. The continual wars between the native tribes eventually drove him back to civilisation.

During his time in the jungle, he occasionally acted as guide for some who accepted his condition. When Charles Xavier went missing nearby, the X-Men hired him as a guide. They found Xavier trapped in remote structure which had magic on it to sap a will to escape of any prisoner.

The force made Xavier and the X-Men too apathetic to escape, but had no effect on Hale, who helped them get clear.

In recent years Ken was recruited by S.H.I.E.L.D. to join the Howling Commandos. He was recommended by Woo himself, now a member of S.H.I.E.L.D.’s Directorate. These commandos were an operation composed of monsters, supernatural creatures and mystical types, which performed covert operations against magical threats.

His unit was led by Warwolf, whom Ken seemed to be closest to within the organization.

A being called Merlin awoke in the modern world. He used his power to revert Britain to a science-free version of itself, raising an army of the lost mystical creatures to serve him. A couple of Howling Commandoes were sent in covertly, but Merlin detected them and sent his forces to attack Area 13 (the Howling Commandos’ base).

Ken was part of the resistance, leading the charge back through the portal after the retreating forces. His unit spearheaded the attack on Merlin’s base in Salisbury, where Ken and Warwolf fought through to confront Merlin. Having foreseen his path would lead to defeat, Merlin chose to teleport away instead, his plans abandoned. 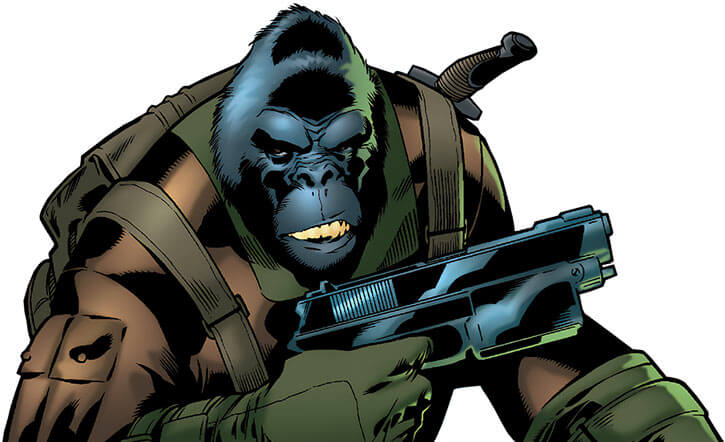 When the aging Jimmy Woo was nearly killed in suspicious circumstances, Ken readily teamed up with M-11 and Marvel Boy to break Jimmy out of S.H.I.E.L.D. custody.

They ultimately learned the truth about Atlas. It was revealed that the dragon Mr. Lao had been the one who first introduced the legend of the Gorilla Man to Ken Hale and set him on the course to Africa.

Ken remains with the team, serving as general of the Atlas forces as well as a member of the inner circle.

Gruff and surly, Ken has had plenty of time to come to terms with his condition. He thus lost the temperamental outbursts he was prone to in his earlier days. He’s intensely loyal to his friends.

SHIELD Tech: “Those bio-hazard suits out there aren’t for decoration.”
Gorilla Man: “I should hope not ! Have you seen how they clash with the decontamination shower’s tiles ? Faux pas, people. Faux pas.”

“I just took on the most powerful covert agency in the world on what a killer robot told me. I’m an idiot.”

“I was running around in the subcontinent when this witch doctor cursed me… now I’m a gorilla. It happens.”

(During battle while M-11 is busy doing something else) “Too bad we don’t have anything useful like a killer @*#$%@# robot on this team !”

(Fighting Namora) “Fine… kill me ! But you’ll inherit my Curse ! Get ready to be the world’s biggest sea monkey for all eternity !”

[Spider-Man says he’s never heard about the Atlas Foundation]
Gorilla Man: “That’s because it’s a secret.”
Spider-Man: “Then why don’t you wear masks like me ?”
Gorilla Man: “Because we’re from a time when people dressed better !”

He spent time as a guest in Gorilla City, but felt as out of place there as he had in human society so didn’t stay long.

Ken has encountered or worked with most of the similarly themed types over the years (B‘Wana Beast, Grodd, Angel O’day). He has a resentment of Congorilla, due to his easily switching back and forth between human and gorilla, and shares a particular antipathy with Monsieur Mallah.

The only one Ken’s happy to spend any time with is Detective Chimp, and the pair often get drunk together.

The origin of The Curse which created the Gorilla Man is lost to history, although mixed rumours of it have been spread far and wide. The Curse gives its bearer virtual immortality, making them immune to the passage of time, but transforming them into a large, powerful, gorilla.

When he killed the previous Gorilla Man, the curse transferred to Hale, and he has held it ever since. Should Hale be killed, the Curse would likewise transfer to his killer.

In game terms they would acquire Gorilla Man’s Physical Stats (06/08/07, unless their own are higher), Powers and Skills (Analytical Smell\Tracking Scent: 05, Density Increase (Always on): 01 and Acrobatics: 06, again, unless they already have them at higher levels), Prehensile Feet, Slowed Aging, Strange Appearance, and this Curse.

While a member of the Howling Commandos, he had a High level Connection to them, and a Low level connection to SHIELD. Given the covert nature of the assignments they undertook, it’s unlikely he had any form of Credentials.

The original story which teamed them up as the Avengers (changed to G-Men in the mainstream universe) took place in an alternate reality, so the history of that story has been replaced by that in Agents of Atlas, but I’ve used the story as a source for some of their abilities. 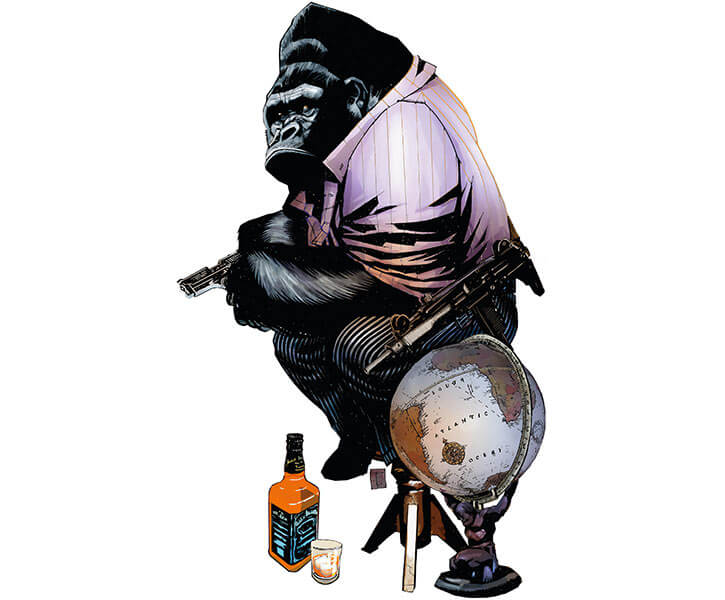 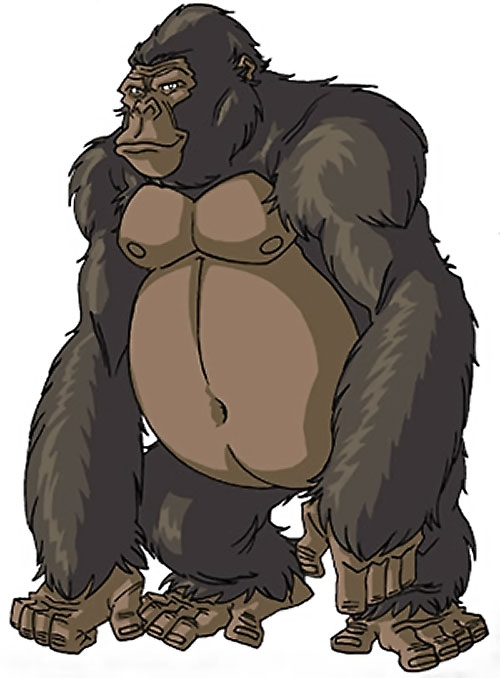 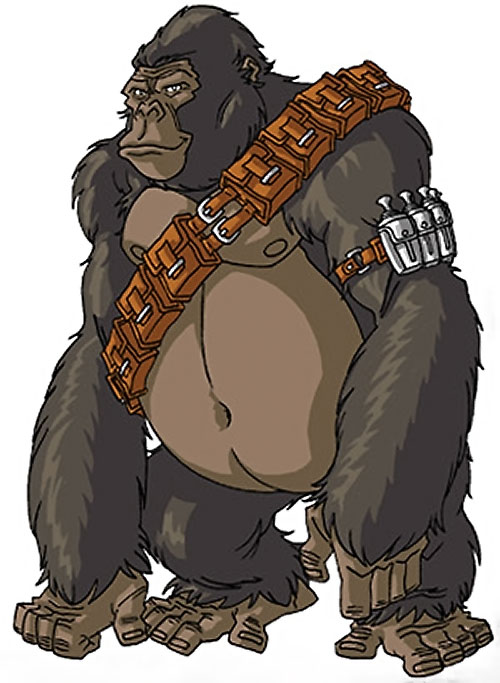 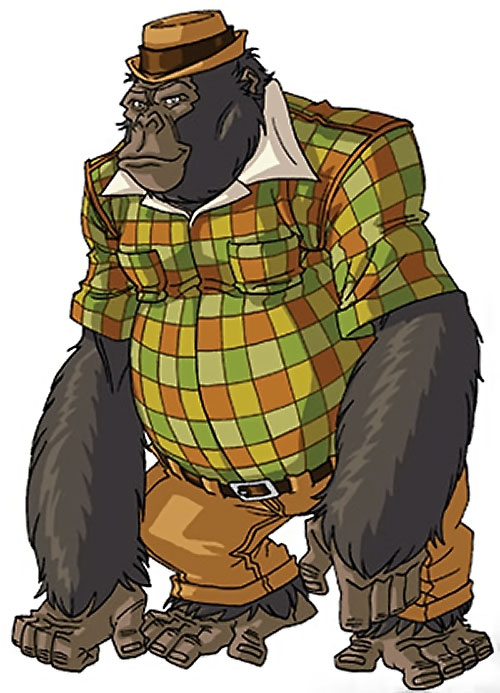 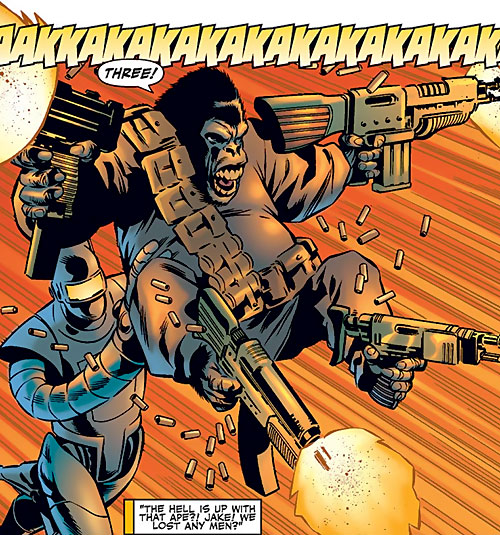 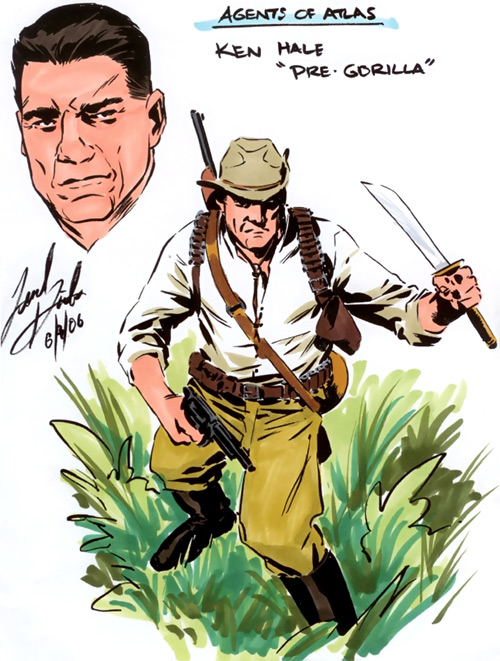 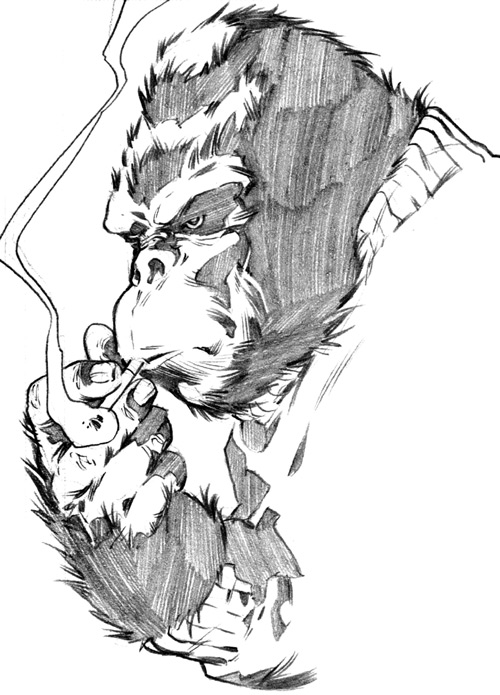 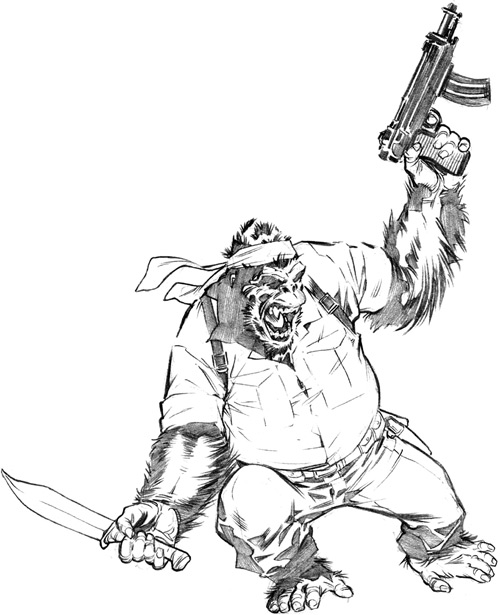