Gouken was once one of the world’s greatest martial artists. At least until he was seemingly killed by his fellow student Gouki.

Now after having finally resurfaced after all these years he’s still a powerful fighter, but seems a bit diminished in his old age.

Gouken was once a student of the legendary Goutetsu. He studied alongside Gouki. Both were trained by Goutetsu in assassination techniques. After completing his training and leaving the dojo Gouken later decided that it would be best to pass the style on as a purely martial art of defense rather than an art of killing.

His first student was one Dan Hibiki. But Gouken later expelled him after he realized that Dan’s only ambition was revenge. He later took on Ken and Ryu as his students who trained and lived with him for sometime.

Both emerged victorious, but the US tournament was concluded first. Ken raced back to inform his master of the good news. Ken arrived just in time to see Gouki, his master’s former training partner, administer the killing blow to Gouken.

Yes, he’s back after seemingly being dead at the conclusion of SF1. No word on exactly what he’s been up to for the past two decades and what his exact motive is !

Gouken is an elderly, but very muscular Japanese man who is bald and wears the rest of his hair in a pony tail. He typically wears loose fitting tattered dark clothes often bound by ropes or bandages. He also has a white beard.

Not much to go on. He’s said to be a fatherly figure of sorts who saw martial arts as a quest for enlightenment and disdained killing.

Gouken: “Ahem Dan, what is it that you desire of your fist ? Dan, with what are you being burdened ?”
Dan: “Just, only strength !”
Gouken: “Then your fist, don’t only close it up. I perhaps was mistaken… Dan, depart from before me… furthermore, abandon your fist !”

He really could be dropped in as is as a former master of any prominent martial arts character.

Bonuses and Limitations:
Adrenaline Surge only works on Jumping. 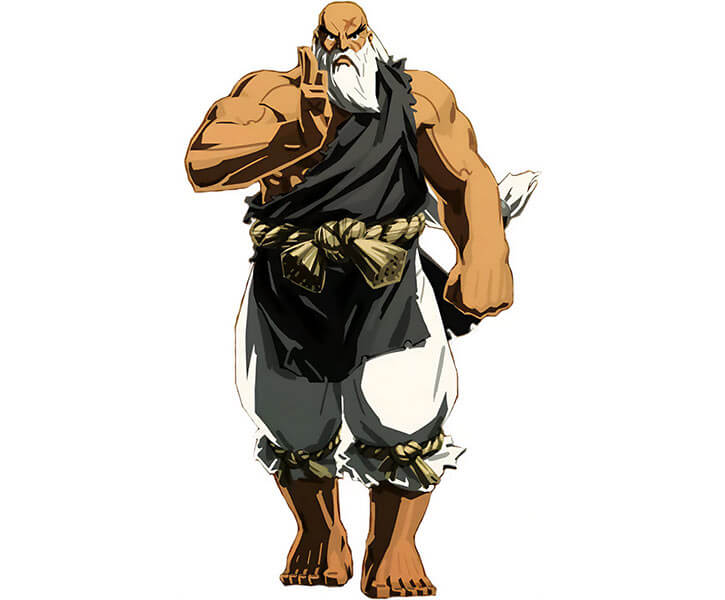