They often are seasoned fighters wielding a pole axe, bardiche or other large melee weapon to deadly effect.

A Gourgaz is fearless and essentially immune to psychic attacks, such as the “mindblast” of Kai monks.

Furthermore they exude a pheromone from under their tail that can inspire great ferocity in an humanoid species called the Giak. Giaks form the bulk of the Darklords’ forces.

Gourgazes are anthropophagous. I’d imagine they are often paid in human corpses and prisoners.

Gourgaz tribes reportedly live in a treacherous area called the Maakenmire swamps, about which little is known. Most contacts have been with mercenaries working for the Darklords, as Gourgazes excel as NCOs  of a sort for groups of Giaks.

The Darklords are the lieutenants of the god of evil. They were given physical form and infused with evil by this god, and set out to conquer the world after building up their power base.

A major Darklord army attacked the Magnakai monastery, killing most of these holy warriors. The onslaught further ravaged the region. One of the Gourgazes and his Giaks even attacked Prince Pelathar.

The Gourgaz slew the noble, but was killed in turn by Silent Wolf, a survivor from the Magnakai monastery. Silent Wolf would soon rename themselves “Lone Wolf” to mark the loss of their fellow Kai monks.

The known Gourgaz specimen did not seem to speak any language intelligible to others – perhaps even to the Giaks. It just hissed angrily.

Source of Character: Lone Wolf 1: Flight from the Dark gamebook.

Helper(s): Lone Wolf wikia  (no idea how reliable it is, but given the lack of information…). 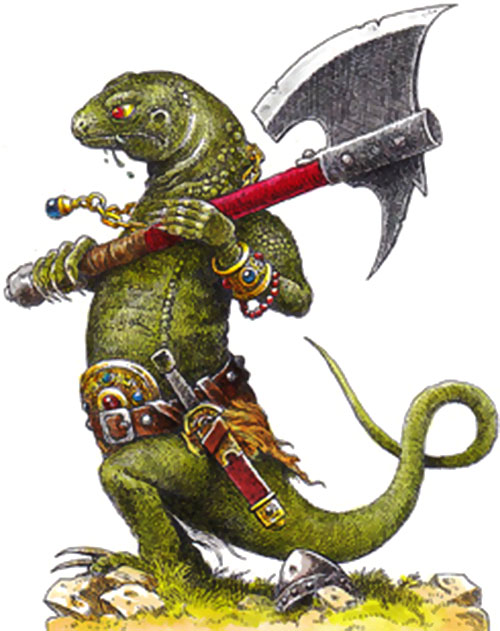