Philip is a guy who gets things done. When the Apocalypse happened, he didn’t lose his head, he saw an opportunity. Philip took action and organized his neighborhood against the zombie hordes.

Because of Philip’s position as the Governor and his leadership ability he is able to muster a small army of around 50 irregular soldiers. All have stats equal to the militia stats from the Average Soldiers and Military article.

From the National Guard station, The Governor has at his command a tank, two 5-tons, and several mid-sized cars and pickups.

When the dead began to rise, Philip gathered together a large number of survivors. He then located a National Guard station 5 miles away. Using the weapons and supplies therein, he established a semi-secure settlement in Woodbury. They cleared and guarded almost four city blocks, upon which Philip declared himself “Governor” (as “president” “sounded too silly”).

Upon his introduction, the Governor appeared to be a fair and strong leader. But it quickly became clear that he was at best, Machiavellian, and at worst, insane.

Philip had a daughter who became a zombie. He kept her tied up in his apartment, feeding her the severed body parts of those who displeased him. He also used the animated heads of his victims, placing them in lighted fish tanks, for his own pleasure. Blissfully unaware of this, the citizens of Woodbury revere him as a steadfast and benevolent leader.

Woodbury was discovered by Rick Grimes, Glenn and Michonne, who were following the trail of a crashed helicopter. The survivors found out that the Governor was using living human beings to feed the zombies in a twisted mix of perversion and sport for the locals.

When Rick would not reveal the location of The Prison, the Governor cut off Rick’s right hand, locked Glenn down, and raped Michonne. 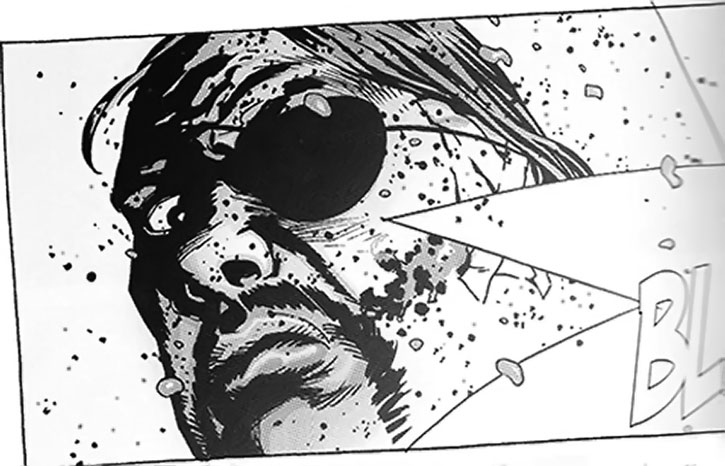 However the fence guard, Caesar Martinez, helped Rick, Glenn and Michonne escape. Michonne decided to stay a little longer deal with the Governor. After a vicious fight between them, Michonne tortured and mutilated him, but the arrival of the Governor’s men stopped Michonne from killing him.

Rick’s group found the National Guard Station, took supplies for themselves and burned the rest. Soon after that they ran into four of the Governor’s men and killed them. The Governor definitely wanted them dead but waited for a few weeks so their guard would be down.

Assault on the prison

Then the Governor led a full attack against the prison, after convincing the folks from Woodbury that Rick and his friends were evil. The survivors of the prison put up a tenacious defense and forced the Woodbury army to retreat.

Michonne and Tyreese followed the Governor in retreat. Tyreese was caught and Phillip used him as a bargaining piece. He threatened to execute Tyreese if Rick wouldn’t open the prison doors. The survivors refused and the Governor beheaded Tyreese.

When the governor returned to his camp, Michonne once again tried to kill him. Enraged, the Governor led a brutal and final assault to the prison. The Governor crushed the prison defenses, killing Axel. To obliterate any further resistance, Governor ordered the tank to drive through the fences.

The Woodbury army began to massacre the survivors on the Governor’s orders. They killed Patricia, Billy Greene, Hershel Greene, Alice and Lori Grimes and her new born baby, Judith Grimes.

Lilly, one of the survivors from Woodbury, realized she had murdered a baby on the Governor’s orders. Lilly put a bullet through his head and kicked him toward a wall of zombies. This ended both his life and the brutal prison assault.

Philip is thin and has a welcoming smile that conceals his evil side. His hair is shoulder length.After the loss of his eye, the Governor wore an eyepatch. During the assault on the prison, the Governor wore full police riot armor.

He initially appeared to be a decent leader, Philip’s true nature was soon revealed. He helped people in situations that would only benefit him, and only when they would fully submit themselves to his commands. To run afoul of Philip was a death sentence. Those who displeased him were dismembered and fed to the zombies.

The Governor seems to respect Bruce Cooper more than Gabe, his other right-hand man. He praises Bruce often, usually for his strength. When he died, The Governor seemed surprisingly more upset than usual.

The Governor loves controlling others, completely dominating them. When he can’t keep control he will burst into an angry rant even striking his henchmen. Yet he will usually regain his composure and think things through. He is capable of intricate planning and inspiring large groups of people.

Even when leading the assault on the prison and shouting for his men to “kill them all!” the Governor would rather take prisoners. He continued to stop and re-start his assault giving his opponents the chance to give up.

Although his daughter has turned into a zombie, the Governor seems to ignore it. At the same time, she has no illusion that she is alive. He loves his daughter, and feeds her with dead or alive survivors. He kills the living survivors for her.

Still, if she tries to attack him, he slaps her in the face, or just tells her not to attack. It’s revealed that he has kept her in his house for months.

“Well… this should be interesting.”

(After Rick, Michonne, and Glenn escape then return and kill four of the Governor’s men in self-defense. The Governor gives a speech to the people of Woodbury)
“I’m glad to see you feel the same way. First we need to find them. I know most of the people who lived in this area migrated to Atlanta when the government ordered us all into the cities…but there has to be someone here who has at least a passing familiarity with this general area. If you do — please let me know. The prison they live in could be five miles away — or it could be 15, and we’re not even sure of which direction it’s in. This is not going to be easy. But it will get done — they will be punished… Of that you can be sure.”

(After a motivational speech to his troops)
Governor: “Get in line with the others.”
Gabe: “You’re not coming ?”
Governor: “I wouldn’t miss this for the world. I’m riding in the tank.”

“Do as I ask, open the gates. This is your last chance.” (after a short wait and no reply) “Mother fuckers. Can’t make it easy. Resume firing !”

(Speaking of the tank)
Governor: “It’s more or less just for show – Really just there to thin the herd to a manageable level for the pied piper.”
Gabe: “Pied Piper ?”
Governor: “Nevermind.”

Governor: “Didn’t I say I wasn’t to be disturbed ?”
Henchman: “Sorry Boss — some shit’s going down.”

The Governor isn’t stupid. He wouldn’t allow his sadistic side to show unless he had a clear advantage, and of course not get caught afterwards.

Knowledge of real super-heroes would likely stop him from doing anything illegal. Philip wasn’t breaking the law before the outbreak happened. I believe the freedom the apocalypse gave him enhanced his sadistic, sociopathic side.

The Governor has a handful of loyal henchmen. These men know what the Governor does behind closed doors in private and rely on him to keep them safe and at the top of life as it is.

Drawbacks:
Varies, but no Physical drawbacks.

Equipment:
Henchmen will carry one or two from the list below.

The Genre for Walking Dead is considered Gritty, however there a few additional notes for consideration.

One is, know that this is a Horror genre, the GM should describe the gruesomeness of attacks and the horror of the world in detail.

Third, character’s may attempt to dismember/torture/mutilate a specific body part with a weapon. The attack must do RAPs of damage equal to the victim’s body total and the target (Hand, eye, knee, etc.) of the dismemberment/mutilation must be announced before the attack is made. This is done in lieu of stunning.

Also, damage done this way will do no more than 1 RAP of actual Body damage as it is not meant to kill. Dismemberment and torture are usually used by the Governor for forced Intimidation/Interrogation maneuvers. 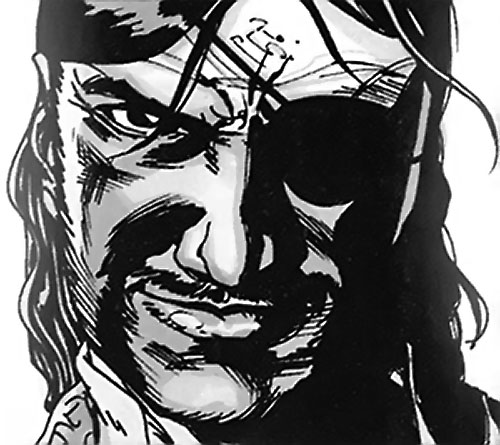 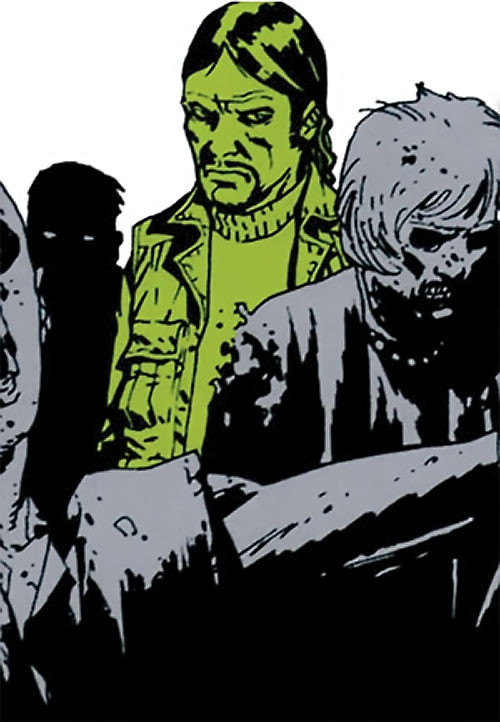 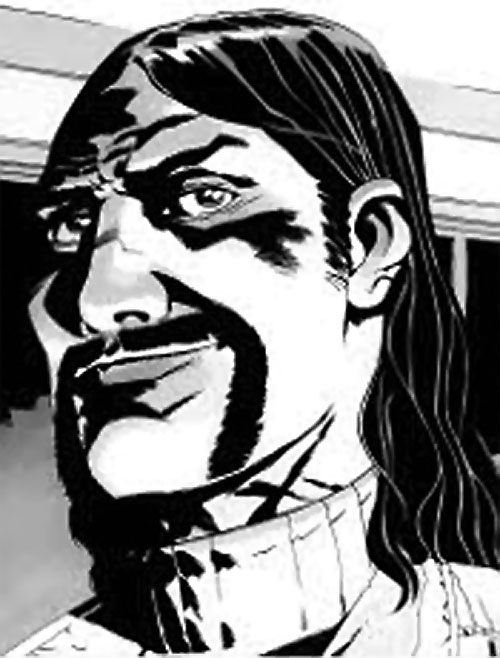 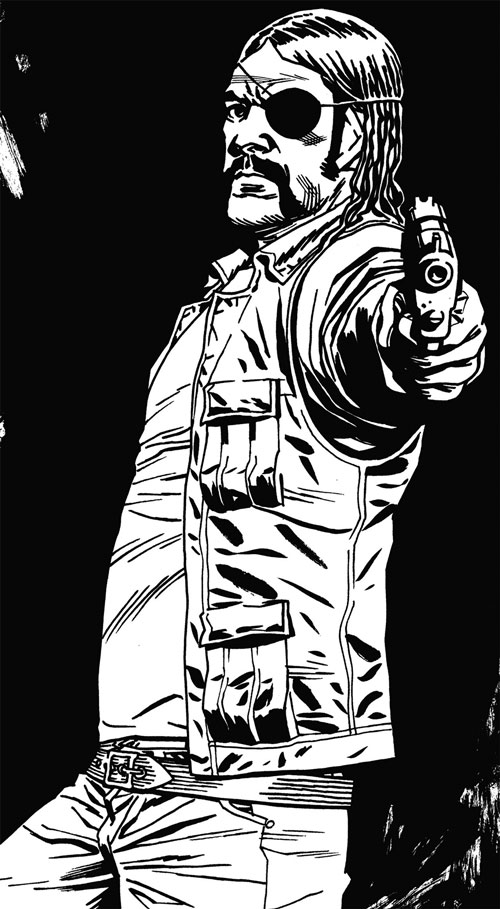