This profile only covers the events found in the Mage: The Hero Discovered series. Also, we recommend reading the Kevin Matchstick character profile first.

The Grackleflints are supernaturally powerful creatures. They are exceptionally strong (“Class 1”), and can shrug off blows from baseball bats without discomfort. Their elbows are tipped with sharp spikes that secrete a deadly venom. The venom is capable of killing an average man in seconds.

Each Grackleflint, save Emil, possesses a unique supernatural ability.

In the place of a supernatural power, Emil has the gift of “initiative”. Unlike his brothers, he is not slavishly devoted to his father and can think and act on his own.

Grackleflints have a fatal allergy to water. A single drop of it will cause them excruciating pain, while a deluge of water can kill them.

The first GrackleFlint to appear in the tale was Lazlo. He first encountered Kevin while in the process of murdering a homeless man that had been destined to aid in Kevin’s quest to defeat the Umbra Sprite. The two fought, but when Kevin gained the upper hand, Lazlo fled into the night.

He returned with two of his brothers later the next day. They ambushed Kevin when he boarded a subway car. The combined strength of the three may have proved enough to defeat Kevin, but he jumped off the moving car to escape. With Kevin’s awakening, the Umbra Sprite had the Grackleflints re-double their efforts in hunting down the Fisher King.

While searching for him, Stanis first encountered Edsel, who was tailing him for some time. He led her down into a blind alleyway where he ambushed her. She fought back with all of her strength, but was easily defeated and in grave peril when Kevin and Mirth appeared.

Like his brother before him, Stanis fought Kevin to a standstill but was ultimately defeated by Mirth’s magic. It was only through the power of the Umbra Sprite that he managed to escape. 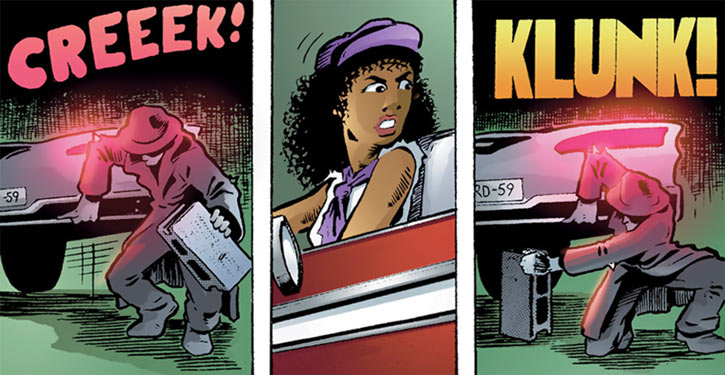 The Grackleflints continued to chase the heroes for the rest of the day. Whenever they thought they found refuge, the Grackleflints appeared with yet another Denizen of Faerie and attacked them. Stanis was eventually captured during one such attempt. The threat of being tortured with water caused him to reveal that it was Mirth himself that was leading the evil creatures to the heroes.

Stanis called upon his father’s power to save him once again. He temporarily escaped their grasp. But unfortunately for Stanis, Kevin quickly gave chase. During the altercation Stanis was killed in an explosion that also claimed Kevin’s home. Soon thereafter, Mirth left the heroes on their own and the Grackleflints were no longer able to menace them directly.

Left with no other options, the Grackleflints returned to their search for the Fisher King. To their surprise, each time they thought they got close, Kevin and his friends ambushed them forcing them to retreat. This cat and mouse game continued for five months. But Kevin and his friends eventually discovered and invaded the Umbra Sprite’s lair – the Styx Casino.

The Grackleflints immediately picked Kevin and his allies out of the crowd, and prepared a nasty ambush for Kevin. He was easily captured, but Edsel and Sean were able to take Piet prisoner and force him to lead them to their leader.

Edsel disabled three of the Grackleflints when the heroes burst into the vast chamber in which the Umbra Sprite was torturing Kevin. In the process she sent Lazlo tumbling into the bottomless pit over which Kevin was suspended.

In the chaos, Kevin freed himself and inadvertantly sent Emil after Lazlo. The Umbra Sprite was forced to abandon his attack to save his two sons. Angered, the Umbra Sprite opened the “doors” through the Styx, allowing Emil to get ahead of the retreating heroes. As the heroes retreated, Emil emerged from one of the doorways and stabbed Kevin in the chest with is spur, fatally poisoning him.

In response, Edsel bashed Emil repeated with her bat, wounding him badly.

As the heroes fled, Radu and Piet followed along with Crumm Cruich the worm of the mists. Crumm Cruich easily defeated and then killed Sean, but when Radu attempted to enter Sean’s home he triggered a mystical trap that the returned Mirth had set. He took a geyser like flow of water directly in the face and chest. He died quietly soon thereafter.

The hunt for the Fisher King continues

A year later, Emil and Piet were attempting to enhance Laslo’s power in order to help him find the Fisher King once and for all. Laslo’s mind had been damaged severely during the assault on the Styx. He now existed in an persistent vegetative state. While they did so, Kevin and his allies returned from Faerie (where they retreated to after Kevin was poisoned) and forced the Grackleflints to flee once more.

While Piet raced back to the Styx to warn the Umbra Sprite, Emil took Laslo the opposite direction. Because of this Emil ended up stumbling directly into the Fisher King. The King inadvertently touched Laslo and awakened him from his stupor.

In the meantime, Piet attempted to protect the Umbra Sprite from Kevin’s rage in the Styx. After using his power to disguise himself and a Leahne Shide as Kevin’s allies he stole closely to the hero and attempted to kill him. Unfortunately, Kevin was in possession of his full power at this point. He freed himself from Piet’s illusions. Enraged by Piet’s gambit, Kevin beat him to death with three quick strokes of Excalibur.

As the battle rose to a crescendo, Emil returned to his father’s side to inform him that he found the Fisher King. But after seeing the chaos and death that surrounded him, Emil too grew enraged at his father’s failures. He savagely beat the Umbra Sprite to death. He then fled the Styx and Kevin’s power, disappearing into the night.

The Grackleflints are physically identical. They are all tall and thin, with milky white hairless skin. Their eyes lack an iris (and a pupil) and they don’t have visible ears. Their elbows are tipped with a single wicked spike (about 4 inches in length) which constantly protrudes from their clothing.

They normally dress in a simple pair of slacks with a black dress shirt. When going out in public, they wear long, dark trench coats and hats to disguise their true nature. When they need to interact with humans directly, Piet uses his power of illusion to make them appear to be identical (yet nondescript) red haired men.

The Grackleflints are cruel, sadistic and thoroughly evil bullies. They take delight in causing pain and torturing their victims. Like most bullies, the Grackleflints are cowardly when facing a foe who is capable of fighting back. Because of this, they rarely faced Kevin and his allies directly, instead they acted in concert with the Umbra Sprite’s other supernatural minions. 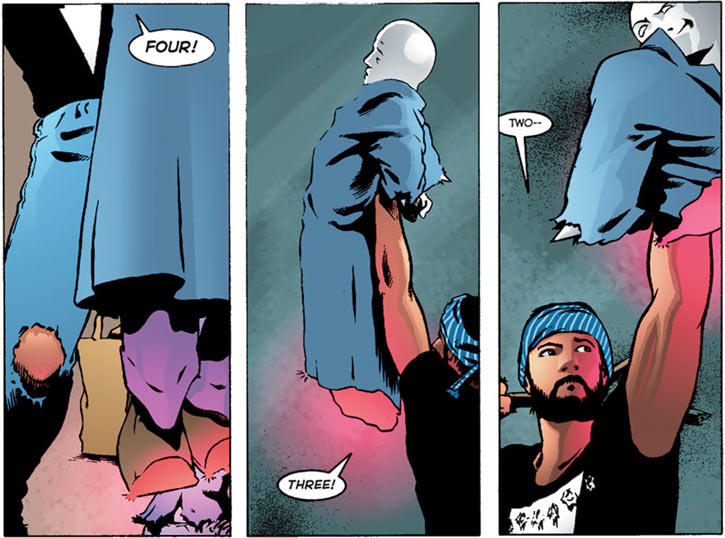 Each Grackleflint is slavishly devoted to the Umbra Sprite. They will do whatever he commands, even submitting themselves to physical torture as punishment for failing him. The only one who breaks this rule is Emil.

Emil is intelligent, cunning, and wilful. Unlike his brothers, he openly questions his father’s commands. He eventually outright defies him when he sees that the Umbra Sprites obsession with Matchstick would lead to their deaths.

“Father ! I fall into the very midst of our enemies ! Send your shade to my aid ! SAVE ME !”

“None of you even see it ! You all accept everything he says, you just “assume” we must win this fight.” ~ Emil the Grackleflint

“Piet and I are going to stick our spurs in his ears — one from each side.”

“He sees green and white and loses all nerve ! Matchstick is here, flutter in power. And so, we are forced to flee like rabbits !”

Bonuses and Limitations:
Poison Touch can only be used after a successful attack with Claws (-1FC).

The five Grackleflints and their powers are: 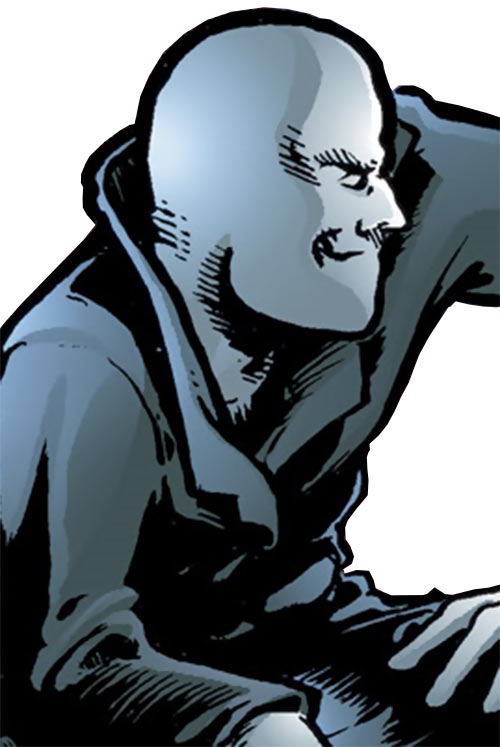 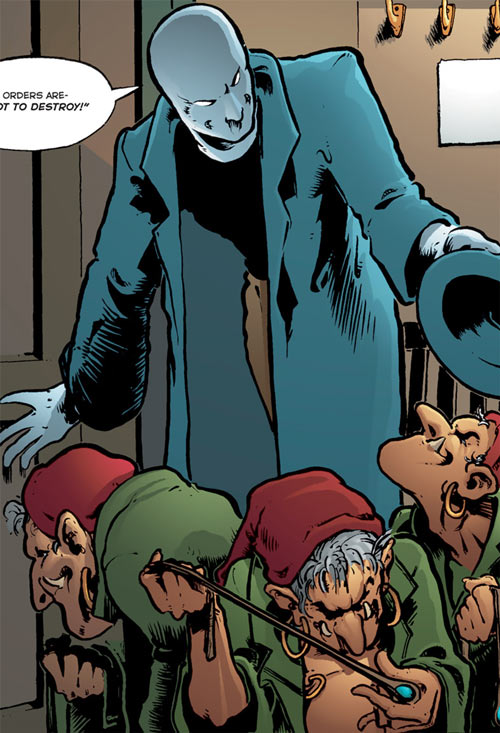 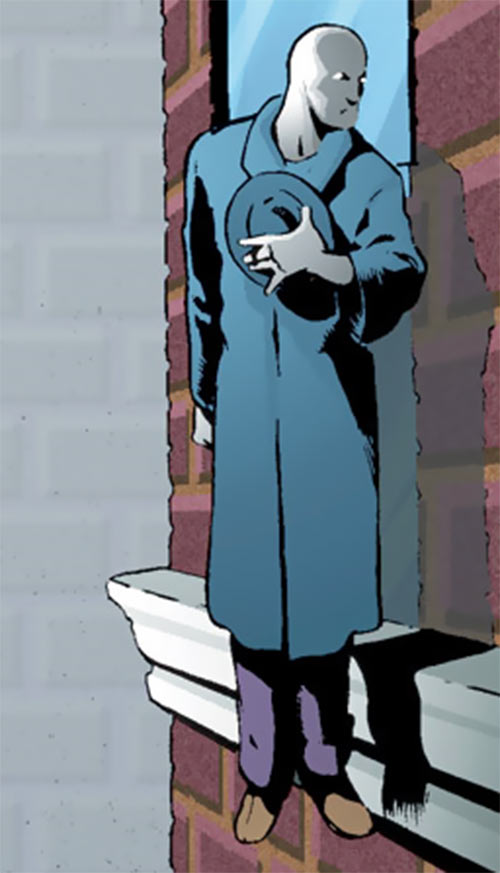