The Grapplers were a team of female costumed wrestlers, first seen in 1979 Marvel Comics.

They primarily appeared as a team in adventures of the Thing (Benjamin Jacob Grimm).

Back during the 1980s, the Thing had solo stories that came to include a career as a super-wrestler. These capitalised :

GLOW — a fictionalised version of an actual 1980s wrestling promotion — had, well, glowing reviews. But it became a casualty of the COVID-19 pandemic.

So if you want that plus crime and super-strength, Marvel Comics has had you covered for decades.

This article is *just* at our “too long for some to read in one gulp, especially on a smartphone” threshold. So it’s presented in two parts for y’all busy go-getters.

The second half of the Grapplers article is there.

(If you had told me beforehand my article about the Grapplers would have to be a two-parter due to length, I’d have laughed. And yet, here we are.)

Once you’re done with this “base camp” article, you can read the individual profiles. And that’s the bottom line. 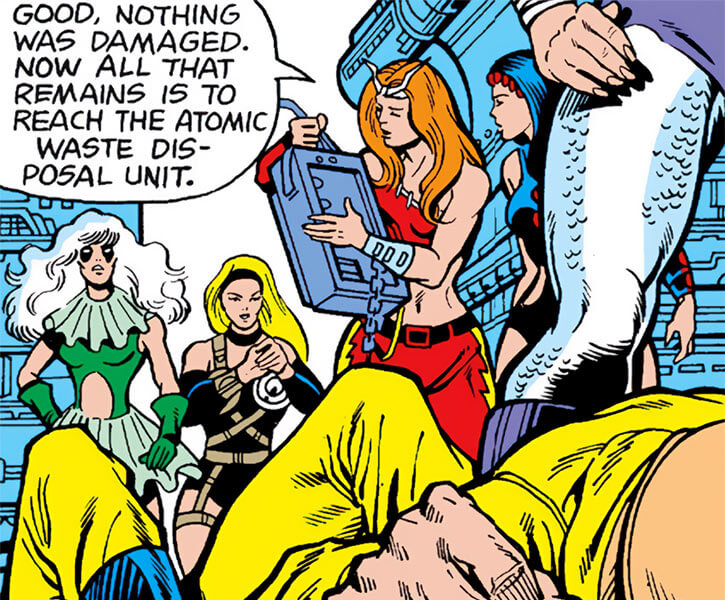 Purpose:
Primarily the moolah. But the Grapplers were also often seeking fame, excitement and to have their skills recognised.

Modus Operandi:
As wrestlers, the Grapplers appeared as part of a wrestling promotion’s events. They were repped by their trainer, Ann Fraley.

As mercenaries, the Grapplers worked much like mob enforcers.

Extent of operations:
Primarily the USA.

Early on, appearances in Japan are likely. We don’t see these in comics, but Japan’s joshi puro promotions were a good place for US wrestlers to make money during those years.

Bases of Operations:
Originally New York City, later on Los Angeles as it became the hot spot for wrestling promotions.

Major Funding:
None as such. But during their time with the UCWF, the Grapplers were making good money. 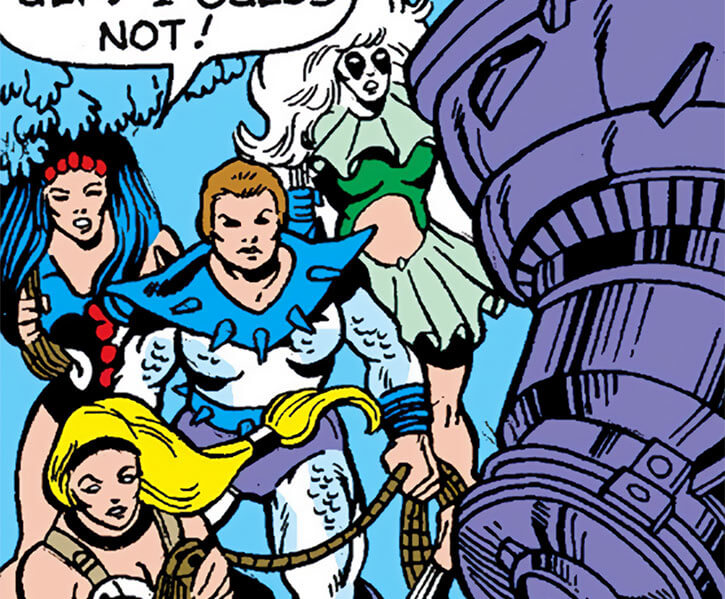 Organizational structure:
Ann “Auntie Freeze” Fraley managed and trained the team until it disbanded during the 1980s.

Titania tends to be the field leader, but it’s informal and low-key.

For a while, the Grapplers were trained and managed by one Kowalski, owner of Kowalski’s Gym.

By 1985, the Grapplers had become a division of the UCWF promotion.

This roster seemed to be a visual homage to the Female Furies of Apokolips.

Let’s go with Bad reputation. From Joan Jett & The Blackhearts first, 1980 album. It was a self-released, lo-fi punk rock mess. But an interesting one.

This tune was also used as WWE entrance music.

The Grapplers are shoot wrestlers. That is, they have robust martial skills that work in actual fights as well as shows.

They also seem to have extensive street fighting/brawling experience.

One caption assures us that they are capable acrobats. Meaning in-ring athletics such as dive-bomb attacks from the ropes.

Despite the name, the core Grapplers are chiefly strikers  . They have a solid wrestling game, but they don’t particularly seek to turn fights into ground work.

The Grapplers are trained to fight as a wrestling duo, and presumably as a quartet.

But in practice, they tend to just charge in. And to switch to actual tactics and teamwork when it’s too late.

On the few occasions where they did bother to use paired fighting techniques, the results were pretty good. In DC Heroes RPG terms, they can occasionally do Team Attacks. Which is rare for such minor characters.

Their best asset was Screaming Mimi’s sonic power. It clearly was a tier above what they could otherwise field.

The original Grappler went through discrete stages of power.

No special powers or equipment.

The gals receive enhancements from Roxxon Oil. Originally, these were described as “energy elements” in their costumes.

This is later retconnedMaking changes to a character or story after the fact to cybernetic enhancements. Likely because it makes more sense to explain Screaming Mimi’s abilities, who has the clearest super-powers.

From what we can *tentatively* tell, these implants :

Prior to their 1979 arrest they also have access to specialised Roxxon Oil equipment. See the individual writeups for these weapons.

Back in ’79, a reasonable reading was that the “energy elements” in the Grapplers’ costumes gave them “Class 8” or so strength. And that they had been destroying machinery with their bare hands.

This doesn’t align well with the Stage #3 events (below).

So our proposed, OcccamA logic rule about favouring the explanation involving the fewest entities-legal reading is that they were destroying machinery using weapons (which only get mentioned years later, in the OHOTMU). And had enhanced, but not truly superhuman strength.

The cybernetic implants likely can be neutralised in some fashion. The Grapplers weren’t too impressive back on Ryker’s Island. Having the cybernetics switched off may in fact have slowed them down from their Stage #1 baseline.

Letha and Titania no longer have access to their Roxxon equipment – they likely used up all ammunition.

However, their strength gets increased to superhuman levels using the Power Broker treatment. 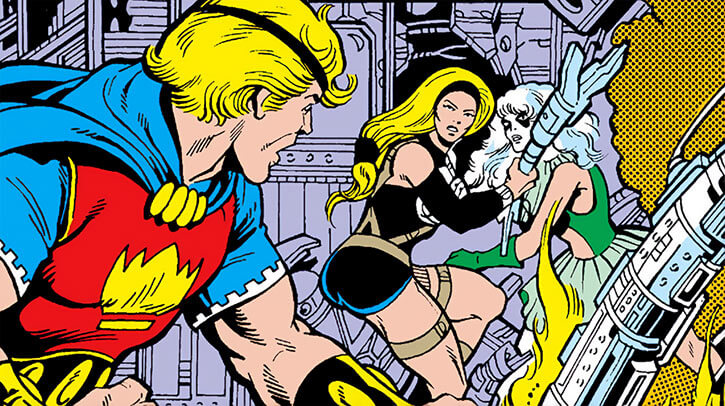 We can observe that :

One discrepancy is that Poundcakes is listed in the Master Edition of the OHOTMU as being “Class 25”. Since neither Letha nor Titania had Master Edition entries, it’s impossible to say if Poundcakes was an outlier, or if it was a revision about the Grapplers’ official strength level. 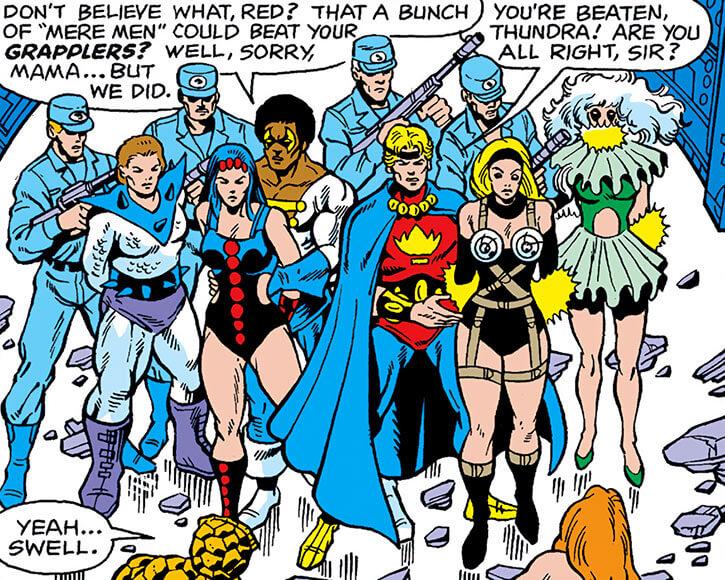 In 2009, both Letha and Titania are resurrected using Dormammu magic. The Hood (Parker Robbins) seems to have directed more demonic energy toward them, making them more powerful.

My No-Prize Hypothesis is that Lascivious and Letha’s additional, Dormammu-granted powers also faded away.

In 2011, when they confront Songbird, the other three Grapplers are easily handled using sonic bonds. Which should have been much more difficult if, say, Letha still had “Class 40” strength.

Likewise, Lascivious’s attempt at mind control whiffs resoundingly. Even though Mel isn’t *that* resistant to telepathy.

In 2010, a Marvel sourcebook lists Poundcakes as being “Class 5”. Which fits well with the hypothesis that the Grapplers’ Power Broker strength decayed over the decades.

At this point, both Letha and Poundcakes no longer seemed to have superhuman powers.

Both seemed to be powerful brawlers, though. So it is likely that the Roxxon Oil cybernetics are still operational, as in the Grapplers’ stage #2 days. But that all Stage #3 and #4 enhancements have faded away.

Stay tuned, wrestling fans ! The second half of the article — with the History and some collective Personality notes — is about to enter the ring !

Whatcha gonna do… when the Grapplemania runs wild all over you ! 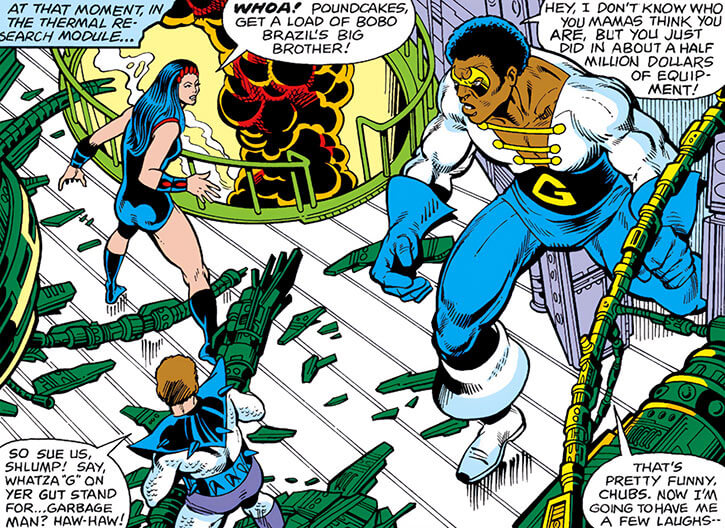